A Forever House on the Pond

John and Marilyn Kenison traded their large, antique home in Milford for a smaller, new one designed just for them on the shores of Peterborough’s Cunningham Pond. 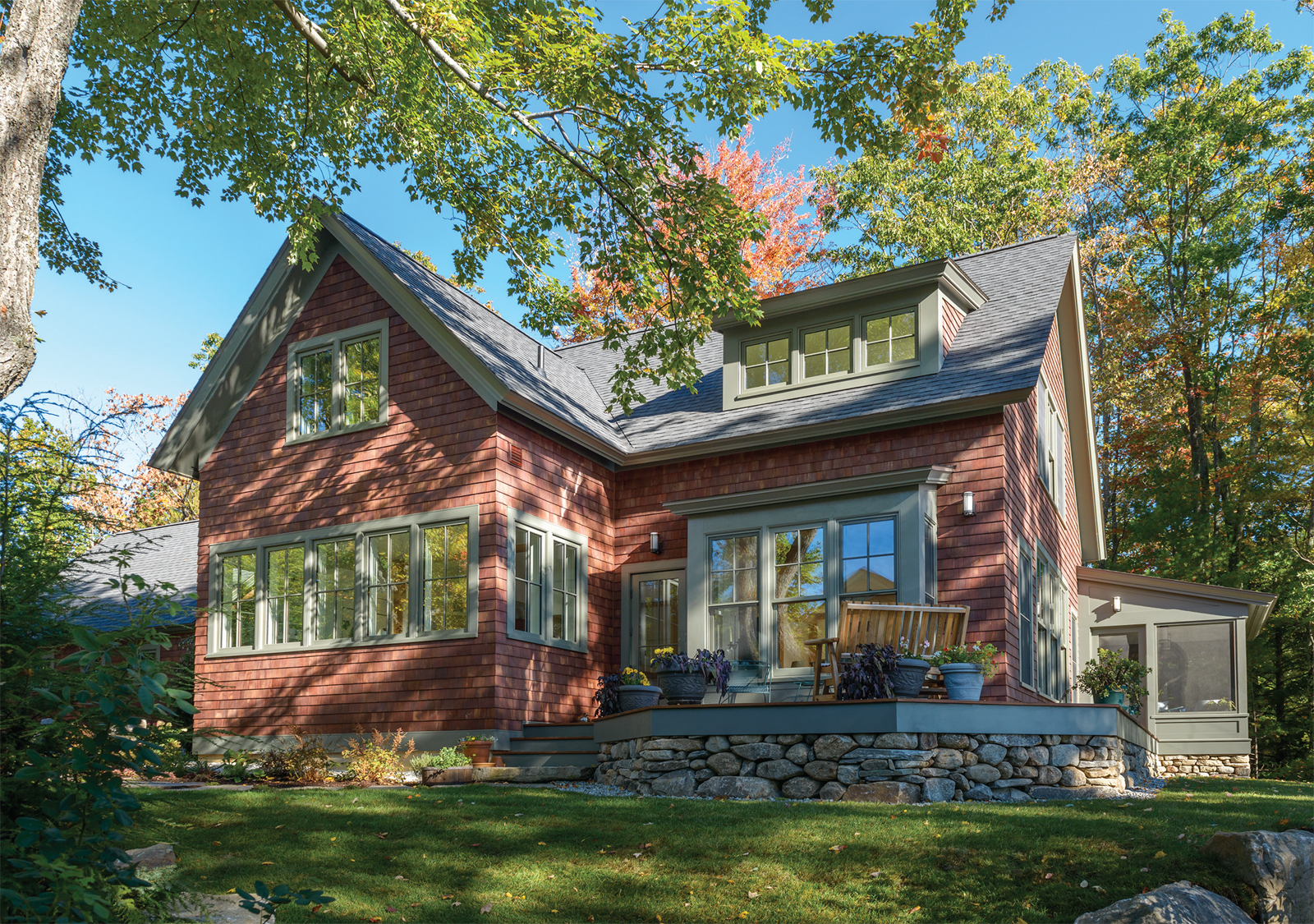 Four years ago, John and Marilyn Kenison weren’t considering a move—even though they had been living in the same house for fifty-three years and were at an age when many people are thinking about retiring. John was (and still is) practicing dentistry in Milford. And he was regularly mowing the grass on the couple’s 165-acre property, where they enjoyed their roomy eighteenth-century Cape, one of the oldest houses in Milford. But one day, their daughter (Peterborough-based author Katrina Kenison) called to say she had found an ideal new location for her parents on Cunningham Pond in Peterborough. “I think you and Dad should move,” she told Marilyn.

Neither parent jumped immediately at the prospect. Eventually, Katrina persuaded her mother to visit the site, where an older camp-style house stood with a view of the pond. Marilyn was sold. She told her husband, “Wait until you see this property.” Says John, laughing, “Then I knew it was trouble.” But as soon as he saw the spot, he loved it, too, and the couple began making plans to move. 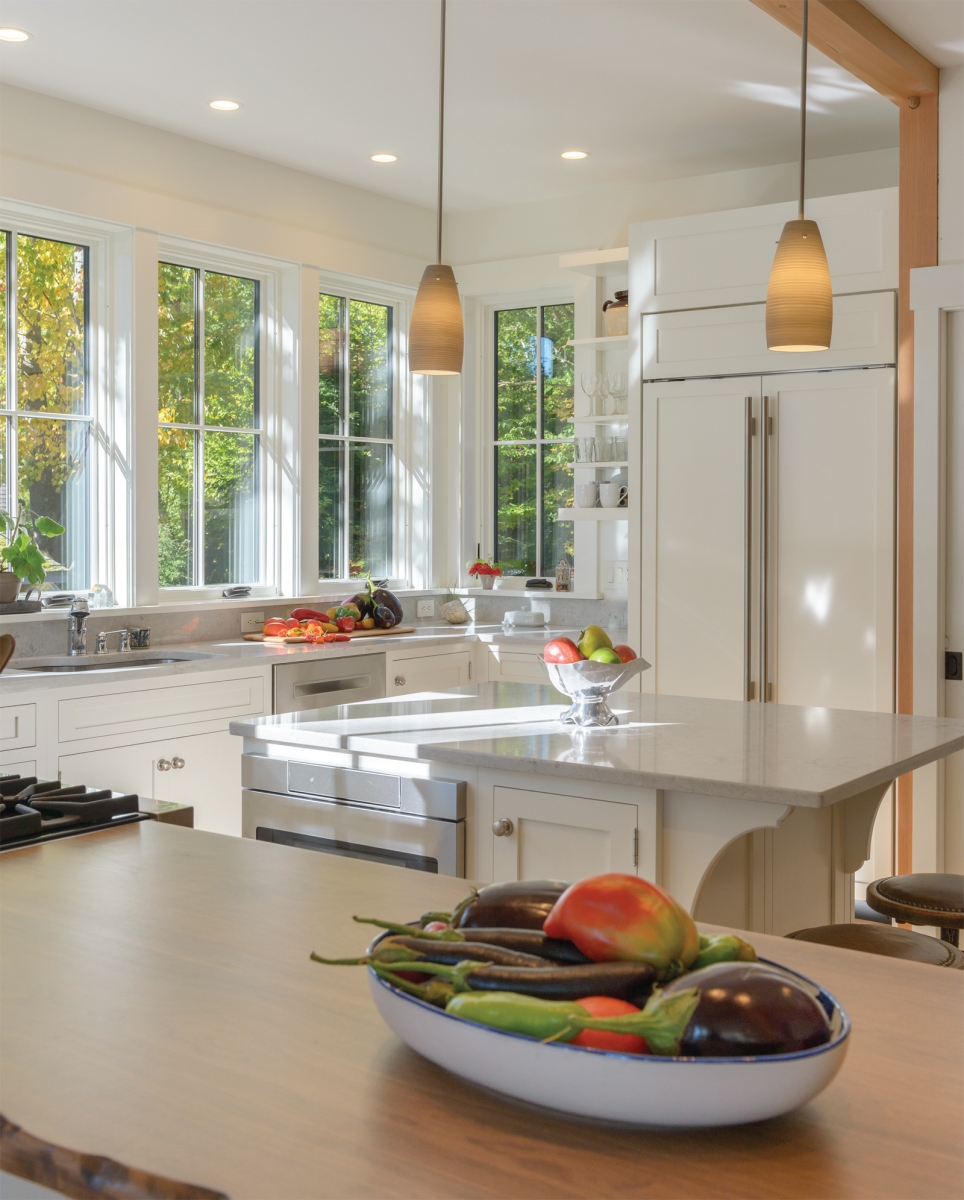 Their house today (they ended up replacing the older one on the site) is a 2,400-square-foot lake-style home with “1.5” bedrooms—a master bedroom on the second floor and a den that converts to a guest room on the first floor. Expansive windows on both floors afford views of the pond—a delight in every season. An elevator and other carefully considered design features ensure the Kenisons will be able to live in the house as long as possible.

The Kenisons hired Jay Purcell of JL Purcell Architects AIA in Peterborough as the architect for the project. He was assisted by Amanda Weglinksi from his office. Purcell had designed a home for Katrina and her husband Steve Lewers in Peterborough, and John and Marilyn liked his work.

Although Purcell, John and Marilyn briefly considered renovating the existing house on the site, they quickly decided that a new house would more closely meet their needs. John and Marilyn knew without question who they would hire as their builder: Michael Mannino of Milford, whom they had known since he was nine. Mannino had also previously made additions and renovations to their home in Milford.

Based on that project, John and Marilyn knew the best way to tackle their new home design: extensive planning. John and Marilyn enjoy sitting down together and poring over plans, detail by detail. “We like to make all our changes on paper,” John says. “That way, there are no surprises.”

John and Marilyn had several goals for their new home. They wanted it to be easy to take care of, and they wanted to maximize the views and the potential for natural light. They also wanted an open-plan concept. A specific feature desired by Marilyn was a screen porch that she could sleep in. And perhaps the most important goal was that the home be one they could enjoy for a long time, with wheelchair-friendly features, including wide doorways as well as the ability to go straight from the garage into the house and easily onto the screened porch and deck.

“They were being very smart,” Purcell says, adding that John and Marilyn realized their Milford home was bigger than they needed, and they would be better served by a smaller, carefully designed and more practical home. “I call these ‘forever houses,’” Purcell says.

Here, Purcell, John and Marilyn got creative. Although they had initially considered a onefloor house, they couldn’t make that idea fit the site, given the allowable footprint on the property. A two-story home allowed them to meet their space requirements as well as optimize the views from both the second-floor master suite and all the first floor spaces. Purcell suggested an elevator to make a two-story home as accessible as a one-story one.

John and Marilyn eventually found the right size and style of elevator from All-Ways Accessible in Concord. It enables stair-free access when needed between the ground floor and the master bedroom/bath on the second floor. Marilyn says while researching residential elevators, she learned they are becoming much more common—and affordable. Purcell notes that an elevator can even be more cost-effective than building a house with a bigger footprint to enable one-floor living.

Another design imperative was plenty of windows. “It was paramount to respond to the beautiful view of both Cunningham Pond and Pack Monadnock beyond,” Purcell says. Here, the vertical plan came into play again. Water views often mean wide bay windows. But for this house, with its relatively small footprint, Purcell incorporated tall windows on the ground floor to create a “vertical” panorama. “This is also a way to make a house that is small feel much larger with an open concept,” he says.

“What I love about these windows,” Marilyn says, “is that you can see the sky and the water.”

Last but not least, Purcell sought to create an open-plan house with a cozy New England feel. He did this by incorporating separate spaces—such as alcoves and window seats—into larger areas. The dining room and master bedroom have alcoves. The living room has a window seat looking onto the lake. This kind of design makes it possible for two people to be the same room but in separate spaces, Purcell says. 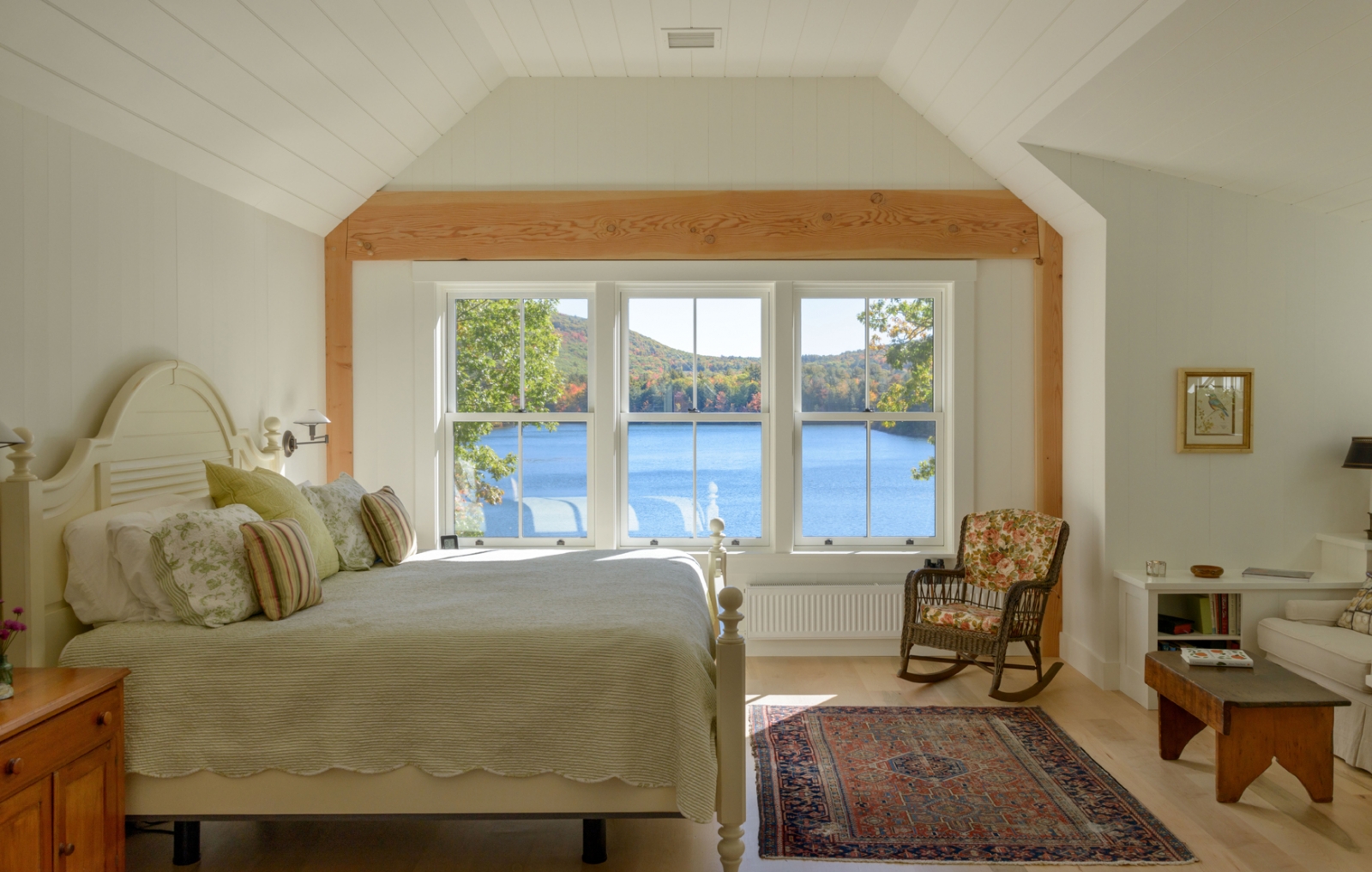 The master bedroom has the best view of Cunningham Pond in the house.

“A project like this really takes a lot of thoughtful teamwork,” says Purcell. Brooks Post and Beam of Lyndeborough built the post-and-beam frame, and Mannino and subcontractors did the rest, including drilling a large rock ledge at the site to allow a crawlspace under the house; there is no basement. “It all went quite smoothly,” says Marilyn, citing good coordination between Mannino and the team.

The finished cedar-shingled house faces east toward the pond, nestling comfortably into the landscape. “People say it looks like it’s always been here,” Marilyn says, and this includes those who have seen the house from the pond.

A calm and easy interior

Inside the house, the look is cozy but uncluttered— the work of Marilyn’s discerning eye for design. The palette is primarily neutrals, with off-white painted tongue-and-groove ceilings and walls (milled by Mannino). Exposed wood beams create a coffered effect on the ceiling. The floors are birch downstairs and maple upstairs. 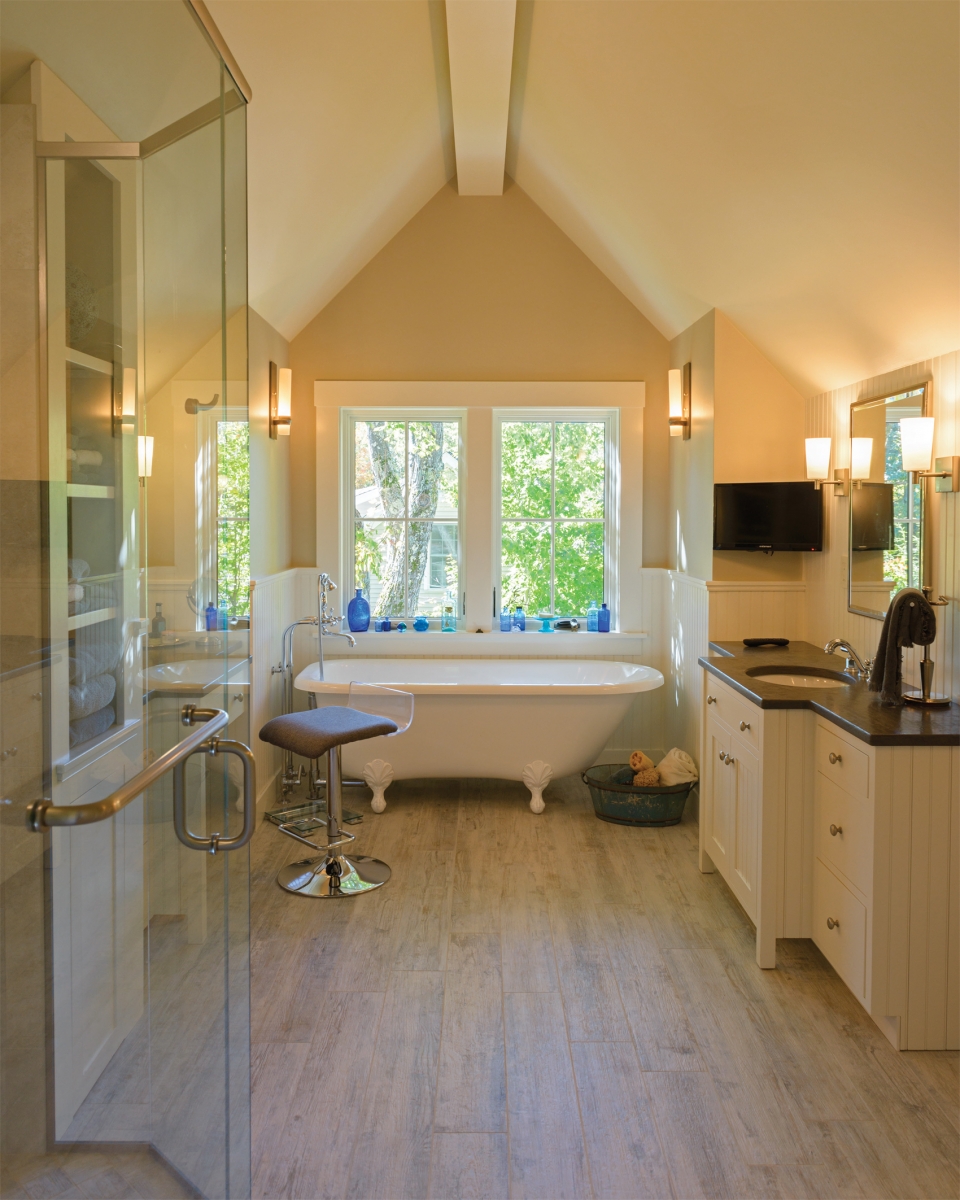 A palette of calming neutrals makes the master bathroom a soothing retreat.

It’s a fresh look for Marilyn. “The old house was oriental rugs and things that go with that look, such as primitives and antiques,” she says.

Although many items—including the dining room table—came from the Milford house, some of the furniture is new—including comfortable easy chairs in the living room that swivel toward the view of one’s choosing. In the living room, a gas fireplace with a stone surround is topped by a picture of local landmark Mount Monadnock. John and Marilyn are fond of local subjects and artists, with the latter represented by Daniel Thibeault and Sue Callihan, among others.

The bright white kitchen has a center island and a view of the pond through a bank of five 4-paned windows over the sink. Dividing the kitchen and dining room is a counter made out of a slab from an old walnut tree outside John’s office in Milford.

On the main floor—in addition to the living and dining area, kitchen, den/guest room, and foyer—there is a deck and a beautiful screened-in porch that wraps around one side of the house. John and Marilyn can dine outside there on fine days. A daybed ensures that Marilyn can enjoy sleeping on the porch.

Upstairs, the master suite area has the best water view in the house. There are no shades on the windows facing the pond, and that’s how John and Marilyn like it. “We’re morning people,” Marilyn says.

She is particularly fond of the library alcove in the master bedroom, one of Purcell’s spaces within a space. The master bathroom has a large shower (with tile from AD Ceramic Tile in Marlborough) that can fit a wheelchair if needed, and a sit-down vanity space that was also a request from Marilyn.

Chuck Simpson, of Simpson Landscape Company in Dublin, designed the landscaping, which included uncovering a portion of the rock ledge that now serves as an attractive, natural feature. He also built the stonework around the house.

Maude Odgers, of The Artful Gardener in Peterborough, planted some small perennial beds.

Going from 165 acres in Milford—where mowing was a two-hour job or longer with a fiftyinch riding tractor—to less than an acre in Peterborough leaves John with a bit more time to do other things.

John and Marilyn’s downsizing project has been a great success. “The house just fit us the minute we moved in,” Marilyn says. “Everything was just right.”

John agrees, adding, “There really was no second-guessing.”

Even though they loved their old house, the ease and comfort of a brand-new, well-insulated and simple home has been a nice change, Marilyn says. It’s also nice to be in the same town as Katrina and Steve. John and Marilyn’s son— John Kenison Jr., an attorney who lives in New Boston—visits often with his family. The grandchildren especially love kayaking and swimming on Cunningham Pond.

John and Marilyn have been in the house for one year and find that they enjoy each season. In the summer, they hear children on the town beach across the water—just far enough away that the noise is pleasing. And they see canoers and kayakers. In the winter, they see people ice fishing, and recall—in particular—a day when they watched a lone figure dressed in black and wearing a red cap skating across the pond.

Most of all, John and Marilyn love getting up to see the sun rise over the pond. “The sunrise is a big part of our day,” Marilyn says. They can see sunsets, too, through the reflection of the sky over the pond. “Every day, it’s a different view,” John says. 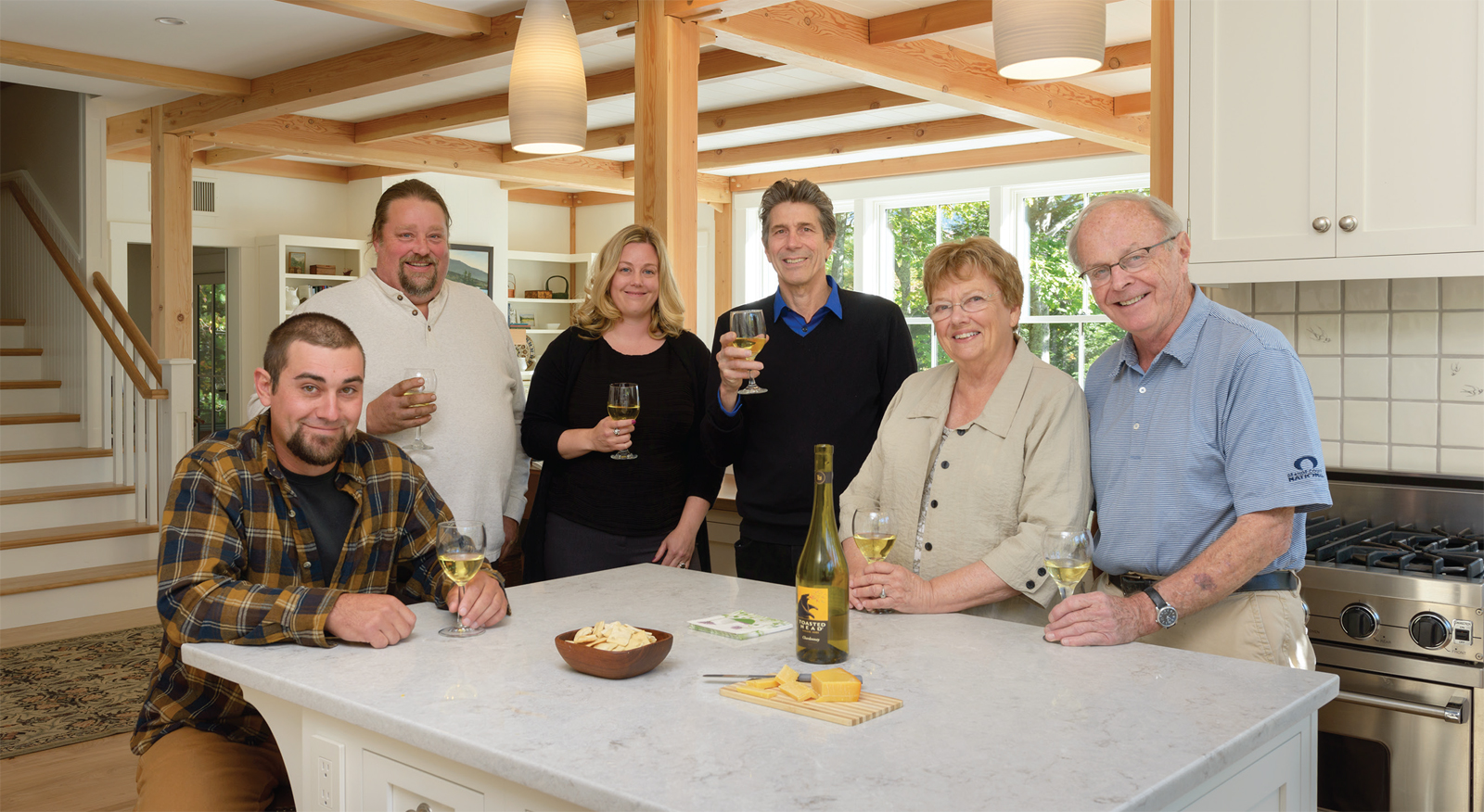 Members of the design team—from left, builders Brandon Salisbury and Michael Mannino; and Amanda Weglinski and Jay Purcell, of JL Purcell Architects AIA in Peterborough—toast the project’s completion with homeowners Marilyn and John Kenison (second from right and right). 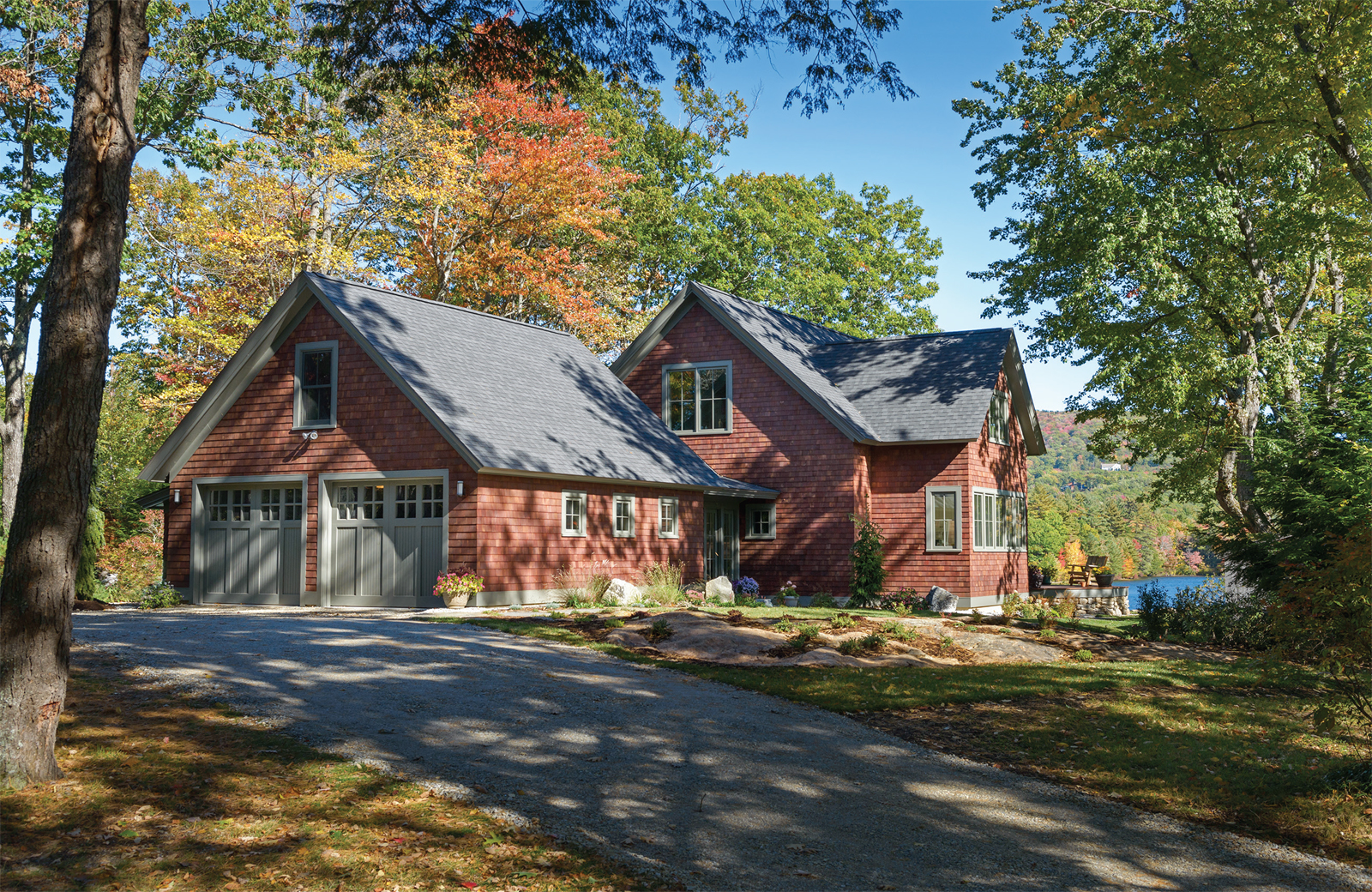 The house nestles into the woods as if it has been there for years.
Clean lines and natural materials—such as the flagstones in the ground (left), and the stone floor and woodwork in the foyer (right)—give the home a timeless, New England feel.
An elevator (with the door open, left) makes it easy to travel between floors if either Kenison ever has trouble using the stairs. The elevator blends into the décor with its door closed (right).
Both the master bedroom and upstairs hall contain smaller, separate spaces. The master bedroom has a library alcove with a couch (left) and the hall, a work area (right). 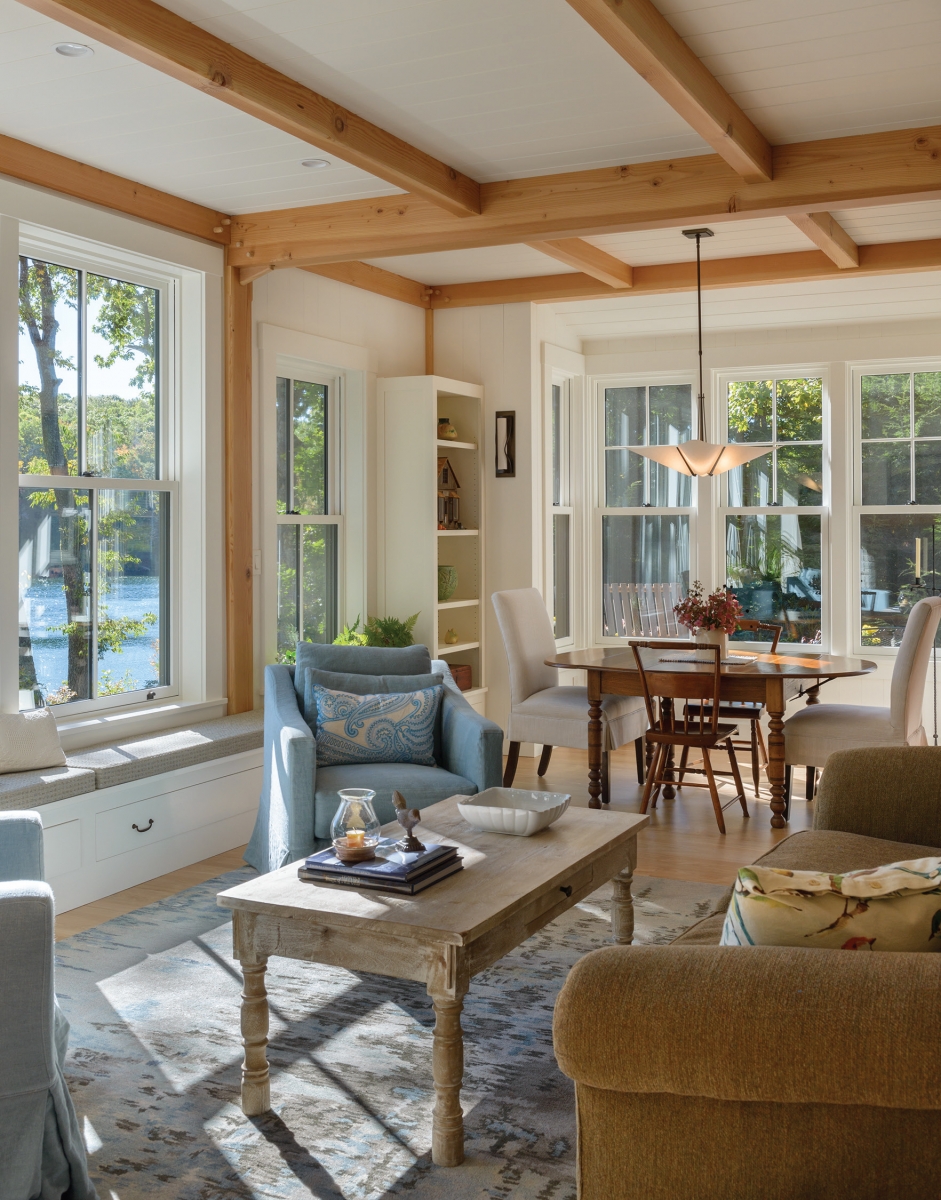 The open-plan concept includes a connected living and dining area. 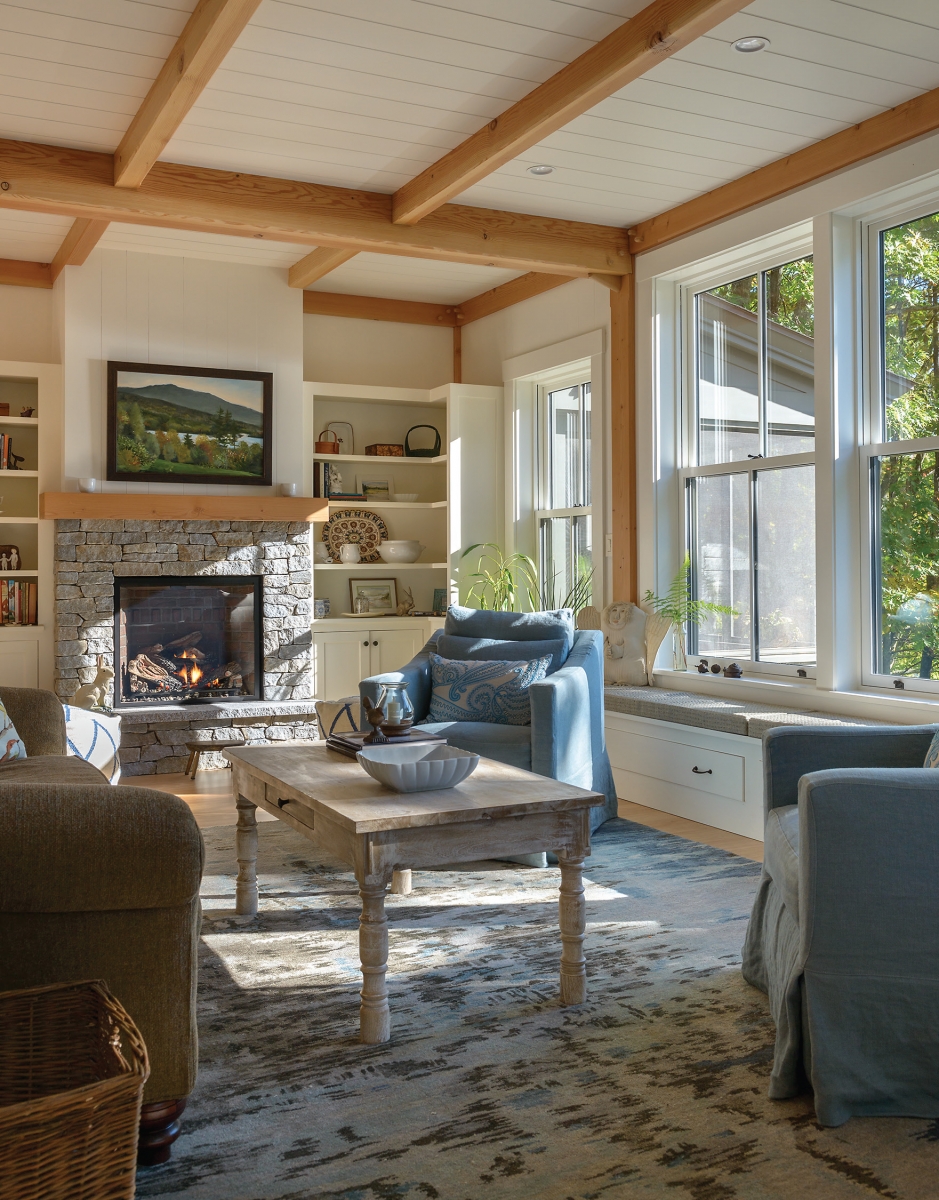 A painting of Mount Monadnock by Peterborough artist Daniel Thibeault hangs over the fireplace in the living room. 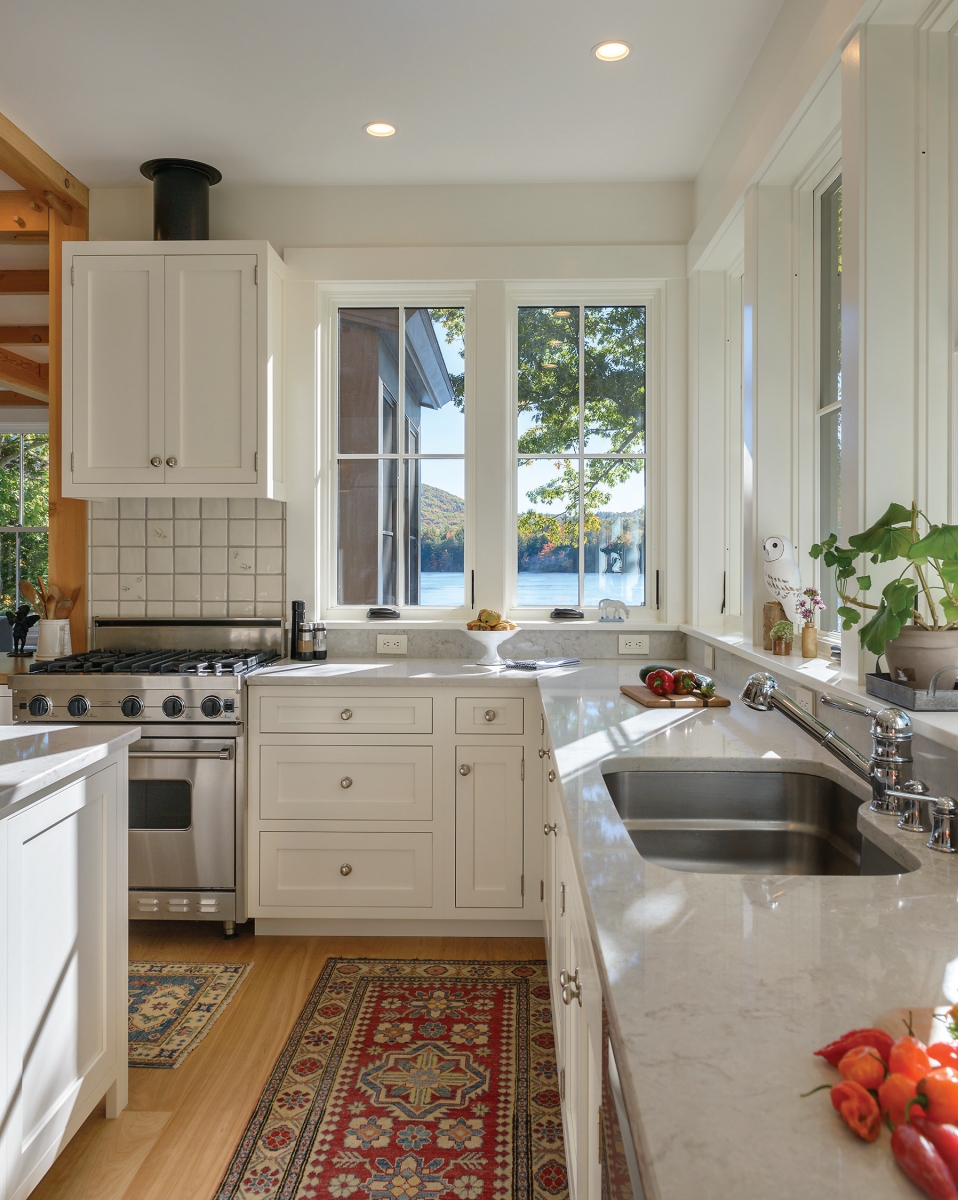 The kitchen has excellent pond and mountain views. 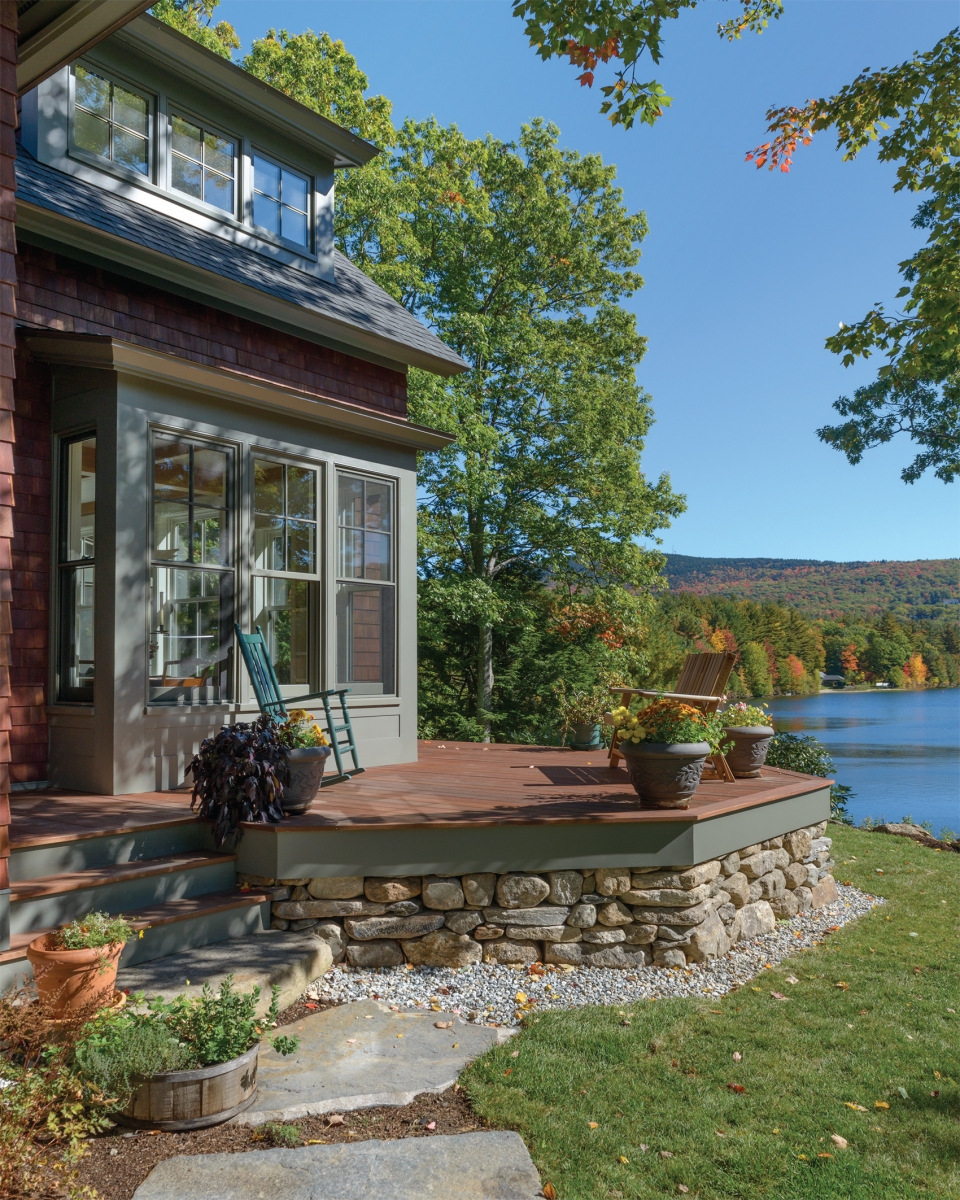 An attached deck is one of many areas of the home from which the homeowners can view Cunningham Pond.
Categories: Architecture and Interiors, Renovation, Renovation & Restoration