A new boathouse and pavilion share space with a house, guest house and historic cabin on the shores of a New Hampshire lake. 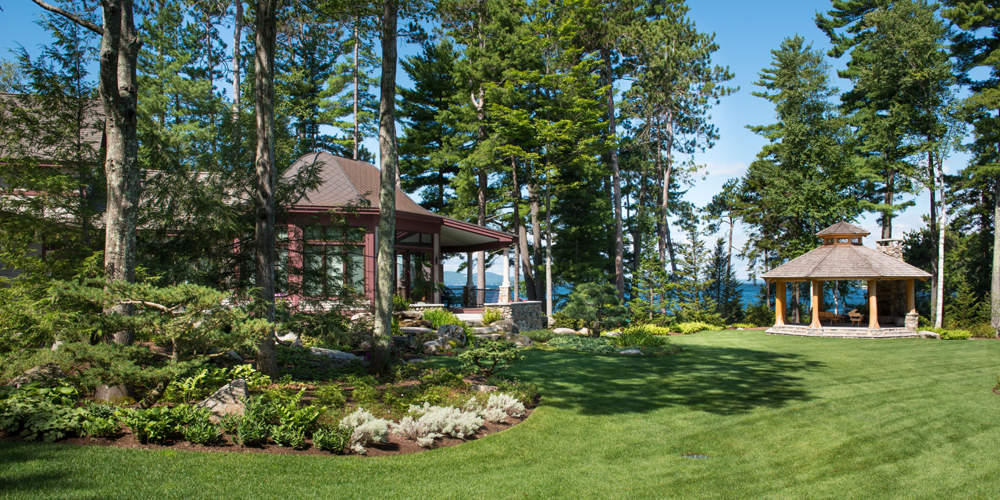 Over a span of nearly thirty years, client and architect have created a rustic yet sophisticated compound that harmonizes buildings and nature.

Years ago, after a summer camp in the Lakes Region ceased operations, its land was sold and divided into lots for private homes. One homeowner built a house there in 1988, and over the years, acquired two adjacent lots. As a result, a lakeside compound was slowly created on a point jutting into the lake. The design combines gracious living with nods to the property’s rustic heritage. The buildings include a main lake house, a Victorian-style guest house and a boat house. There is also a pavilion that could easily have stood on the property of a summer camp and a lovingly restored cabin that dates back to the original camp.

“The objective,” says Chris Williams, AIA, of Christopher P. Williams Architects in Meredith, “was to create a harmony among disparate building and landscape elements to reflect the natural environment in a relaxing manner.”

Williams has worked with the client for nearly thirty years, beginning in the late 1980s, when Williams’s company was hired to design the main house. In the late 1990s, Williams designed a garage and Victorian-style guest house near the main house. The most recent project, in 2011, involved a substantial addition to the main house, including a “boat-themed” room with 270-degree views and a wine cellar. Other elements of the most recent project include a detailed landscape plan (by landscape architect George Pellettieri of Pellettieri Associates, Inc. in Warner), the pavilion, the boathouse and the restored cabin (which now serves as a second, smaller guest house). The work on the old cabin won an Historic Renovation award from New Hampshire Home’s 2016 Design Awards. 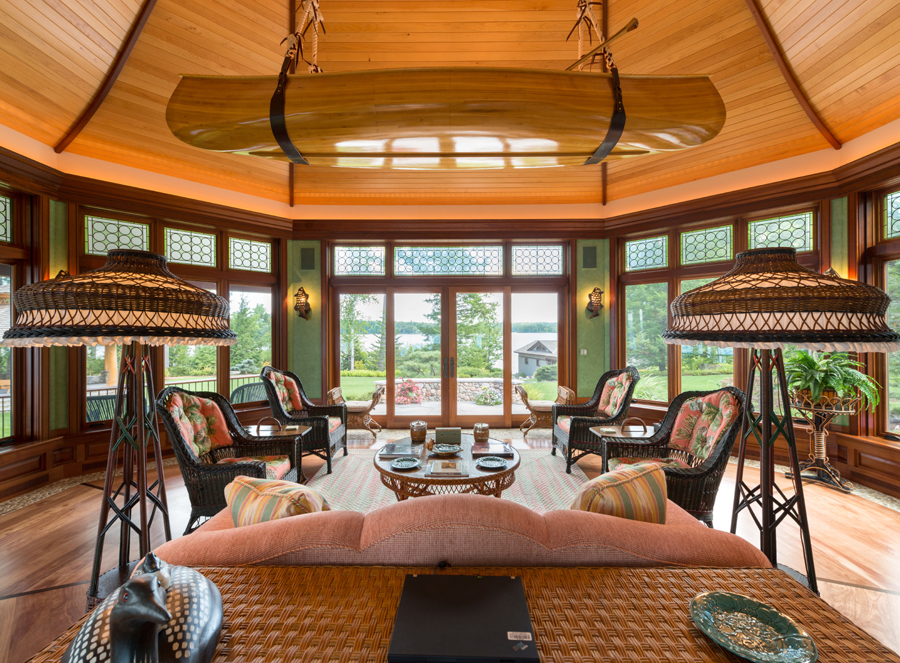 The boat room, named for the canoe hanging from the ceiling, offers 270-degree views of the lake and surrounding woodlands.

Williams also notes that over the course of twenty-five-plus years, the owners’ goals evolved, and the architects developed greater experience and maturity. The project that began with one house and one lot grew to two houses on two lots, and then finally to the current collection of buildings on three lots. The original house, for example, was designed so the occupants couldn’t see a neighboring house on the adjacent lot. When the owner acquired the lot and removed that building, blocking that view was no longer a priority.

Related goals for the original house included making sure that no more than half of it would be visible at any one time, and that it would appear to have been there for about fifty years. (The guest house, which was built later, was designed to look as though it had been there first, and the second, main house built to complement the guest house. This was why the guest house was designed in the Victorian style.)

As the projects moved forward over the years, newer goals included minimal visibility of the property from the lake. The homeowners also wanted to retain as many trees and existing blueberry bushes as possible. The idea was to create an integrated, comfortable environment that meshed with the surrounding landscape.

Coordinating views among all the houses and outbuildings on the property—as well as harmonizing their relationship with each other and the surrounding lake, woods and landscaping—was a unique design challenge, according to Williams and Pellettieri. They were joined in the project by, among many others, builder David Frost of White House Construction in Gilford. 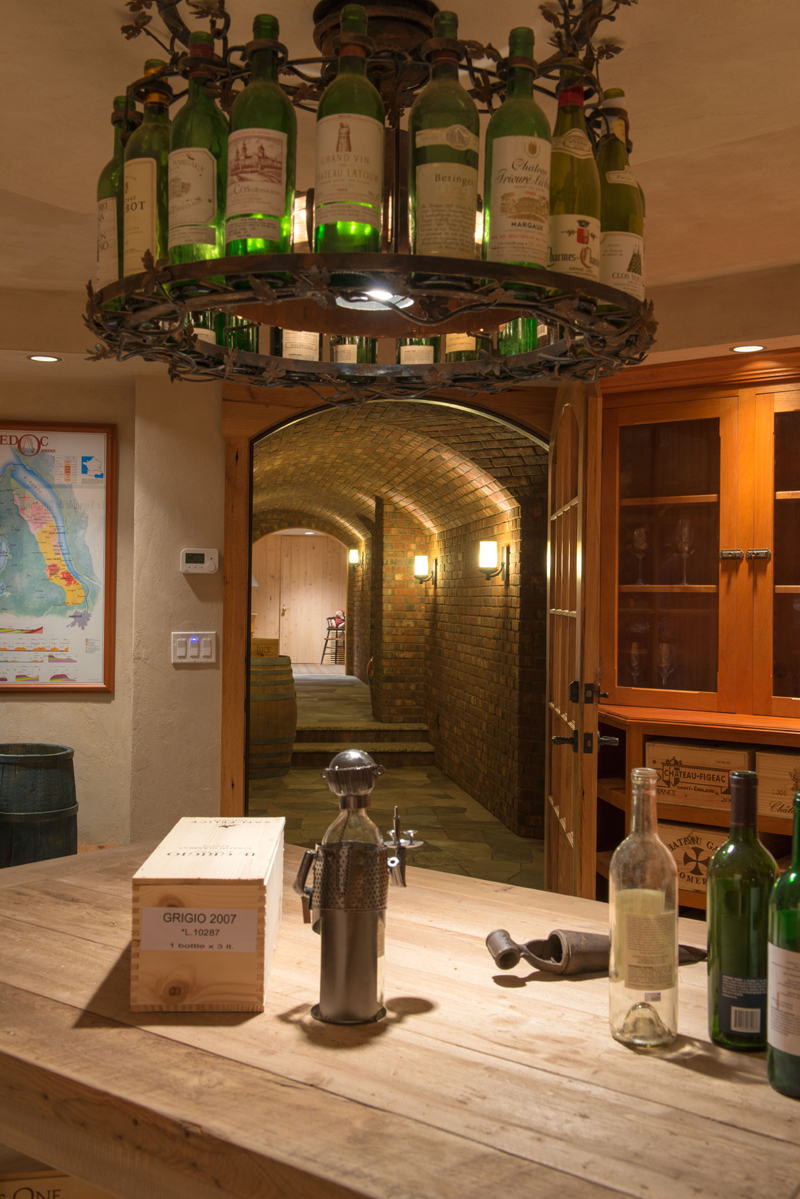 The first element of the 2011 project involved both a main-level and lower-level addition to the primary house. On the lower level, an arched, brick passageway leads to a spectacular new wine cellar that features custom-made chandeliers by Sparling Studio in New Haven, Vermont, that incorporate bottles from wines particularly enjoyed by the client; a stone floor; and a special climate-control system to optimize temperature and humidity.

The main-level addition replaced a deck and screened porch with a new, expanded deck and a covered porch facing west and north.

The addition also incorporated new sitting areas, including a “boat room” that is overhung by a custom-made canoe and features 270 degrees of lake views. The boat room has a curved, ribbed mahogany ceiling from which the canoe is suspended. Inside the canoe, uplighting provides soft illumination to the wood ceiling. Custom, stained-glass windows from Lyn Hovey Studio in Norton, Massachusetts, are installed over the transoms, and custom-designed light sconces (also by Starling) represent different species of fish that live in the lake and complement the feel of life on the water.

A sitting area next to the boat room shows the deft touch of Boston-based interior designer Richard Fitz-Gerald, who has worked with the clients for many years. A multicolor rug and stick-style furniture upholstered in a bright floral pattern contribute to a fun, yet sophisticated look. The walls of this room are painted in green and white, with “stick work” designs painted by the interior design team.

An Adirondack-style octagonal pavilion is the focal point of the property. Sitting near the end of the point toward the water, the pavilion references the forty-five-degree diagonals of the main house and guest house while offering wide-open views from within. An open cupola at the top lets in light, and a fireplace and seating make it an appealing gathering spot in warm or cool weather. 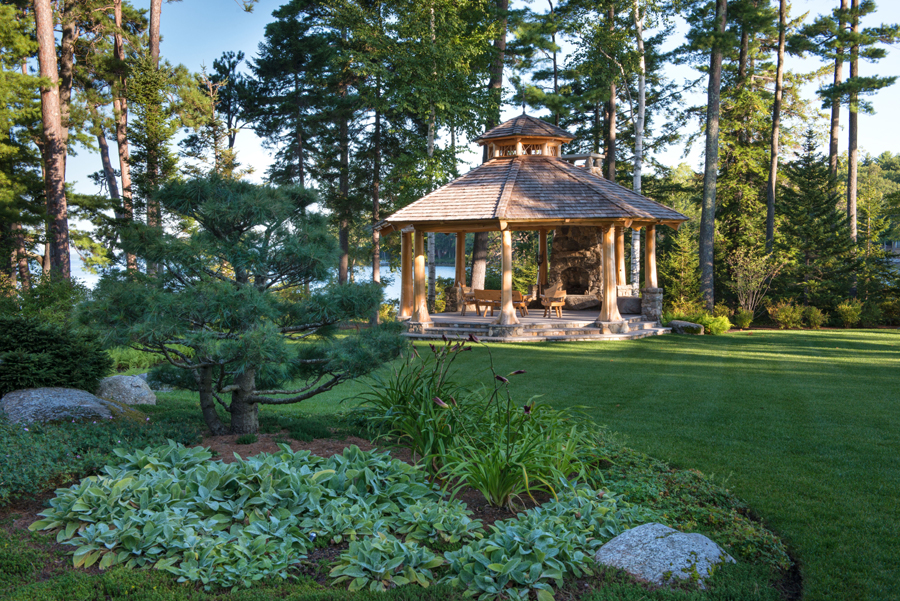 The pavilion was built recently but looks like it could have been a part of the summer camp that stood on the site years ago.

The pavilion’s supporting posts are cedar trees from Maine, and the floor, also from Maine, is from Deer Isle Granite Company. Each piece of granite was ordered to be cut to a specific size and shape, and, when the pieces arrived, the crew assembled them like a puzzle. The pavilion’s chimney is designed to elegantly obscure the view from the main house of another house across the water. Stick work figures throughout, maintaining the camp theme of the buildings.

The building with a direct tie to the site’s camp heritage is the cabin, now a second guest quarters, that had been in need of updating. The cabin was originally on piers but was given a stone-faced foundation that provides room for seasonal mechanical equipment. The exposed framing was retained, but the original layout—which consisted of two bedrooms, a small porch and a tiny bathroom—was reconfigured to one bedroom and a small living room with views of the new stone fireplace. The porch was relocated to take advantage of the newly landscaped space between the camp and the lake, as well as offer views of the pavilion.

A small addition was made in order to accommodate a three-quarter bath. Furnishings are simple and rustic; a wicker couch with quilted upholstery provides cozy seating in the living room.

In order to keep that “cabin in the woods” feel, as many of the existing trees surrounding the structure as possible were retained. 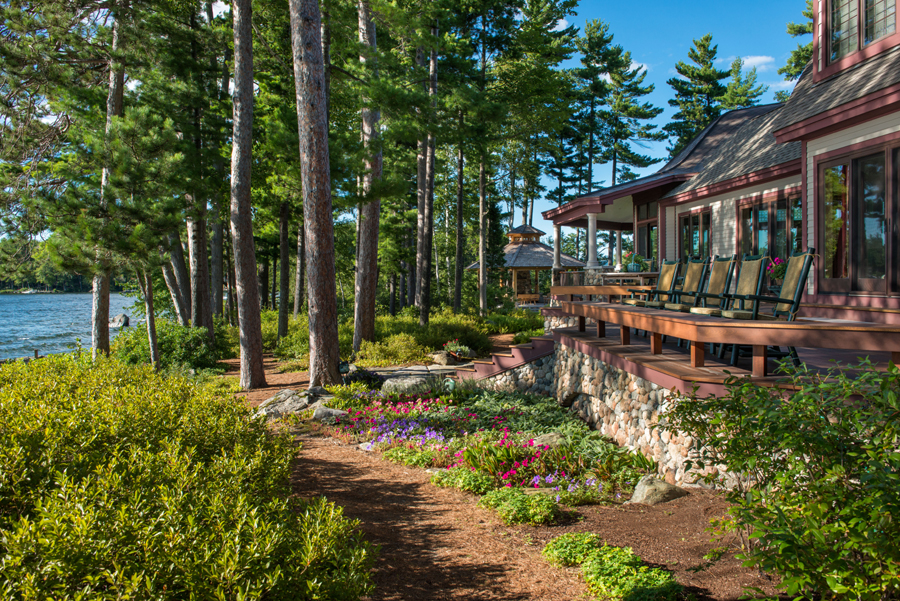 A back deck overlooks the lake and blueberry bushes.

New Hampshire Home’s judges said of this project: “Previously this was a small, outdated yet endearing guest cabin. This renovation kept the integrity and historic character of the original camp while not overdoing the design. New expanded and functional spaces were thoughtfully created. New materials were sensitively integrated with old, while providing small twists of fresh contemporary accents that improved the renovated feel of the cabin.”

The third small gem on the property is the new boathouse, which includes windows and a cupola for light, as well as fans to keep air circulating and pressurize the building to cut down on the humidity common to boathouses. Two boat slips raise and lower so that when the boats are docked, they are supported on the floor. The floor sections underneath the boats lower them to water level at the touch of a button. The boathouse foundation was built by Watermark Marine Construction of Laconia. White House Construction built the top section of the boathouse. Another key player in the boathouse project was Douglas Waite, PE, of Design Day Mechanicals, Inc. in New Ipswich. 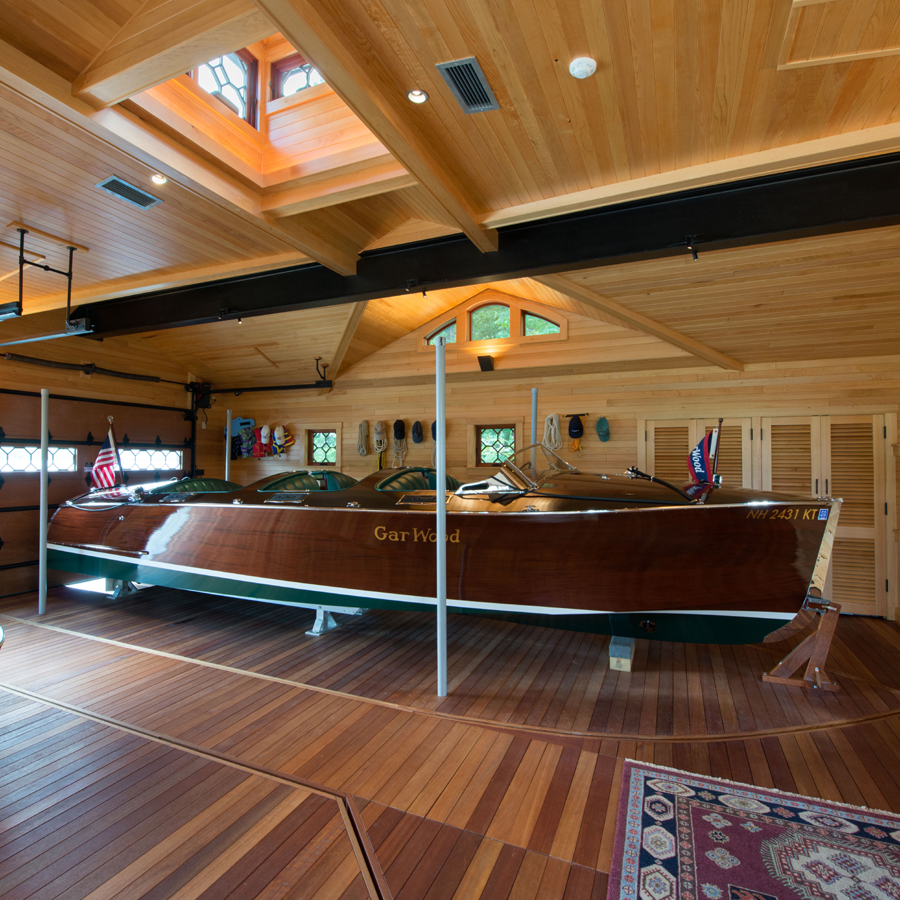 The new boathouse has slips (see cutout around boat) that can be used to lower the boats right into the water.

Landscaping these several acres was essential to harmonizing the various buildings and elements across what were once three separate plots. The clients wanted a screen of native plantings to keep the property less visible from the water. As many trees as possible were retained, as well as the wild blueberry and black huckleberry bushes. According to Pellettieri, the emphasis was on native-New Hampshire plantings, some of which were enhanced with selected specimens chosen to complement them.

In addition, there are many varieties of perennials and annuals because the clients love flowers. These include day lilies, zinnias, petunias and dahlias. “We used a host of colorful and interesting plants for attracting bees and wildlife,” Pellettieri says. 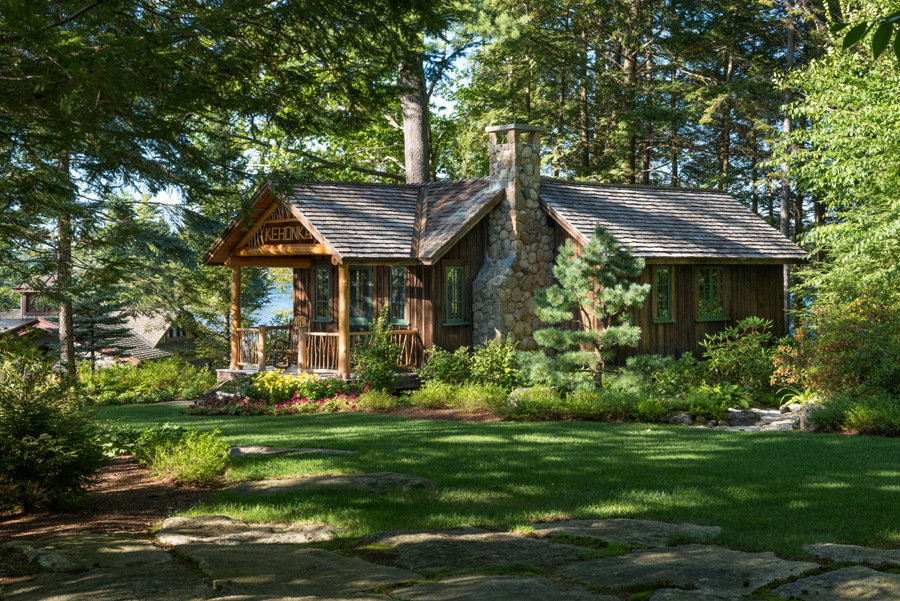 The restored cabin’s front porch was moved to provide better views of the overall property.

Trees include a copper beech and several Japanese trees, the latter a specialty of Shin-boku Nursery in Wentworth. There is a great deal of stonework, including a water feature near the house.

In all, there are six buildings on this point on the lake, representing a rather extensive retreat but one that—thanks to careful landscaping and overall site planning—“retreats” visually so as not to overwhelm. “This was a combined effort of the entire team,” Pellettieri says.

“The project design team worked seamlessly and collaboratively to come up with a solution that blends a level of formality with relaxing results,” Williams says. In particular, he liked working on the wine cellar and the boat room in the main house with the other members of the team. “It was really, really interesting,” he says. “Everybody was so engaged; we would talk for hours about how to detail something.”

This property has fine craftsmanship and all the comforts of home—three homes, really. But, it also retains a bit of its roots as a historic, rustic getaway. 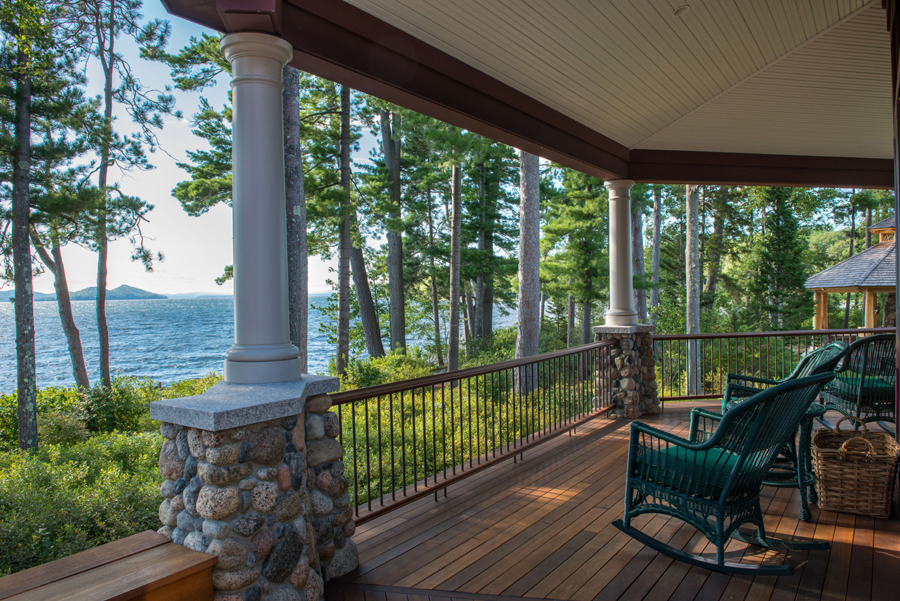 A covered porch with wicker rockers provides a comfortable, shady spot for relaxing. 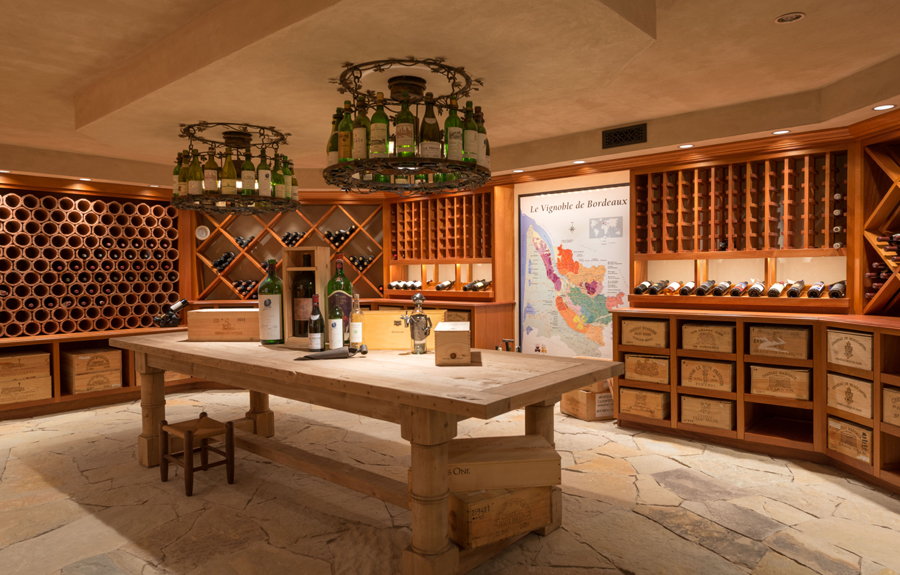 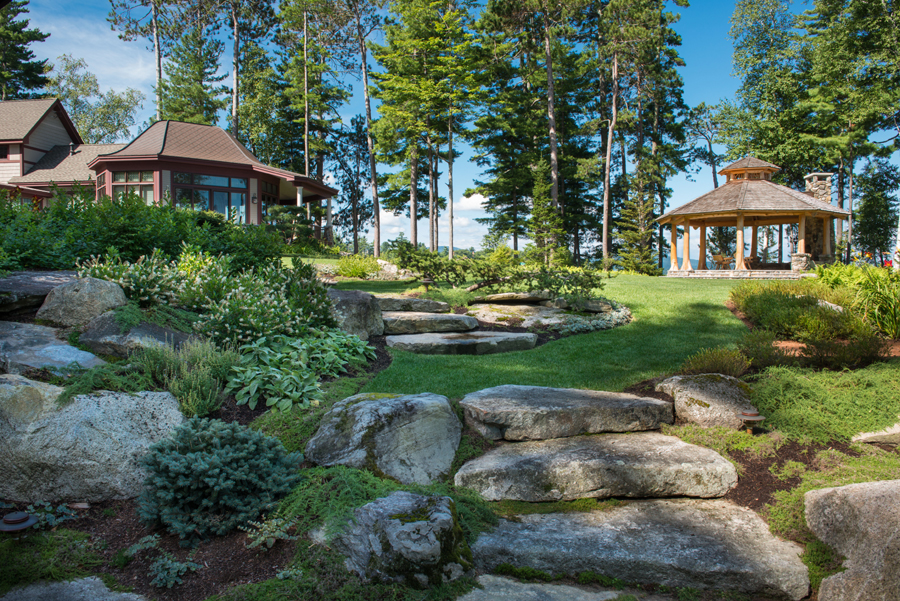 Rooflines and landscaping all work together to coordinate the various structures on the property. 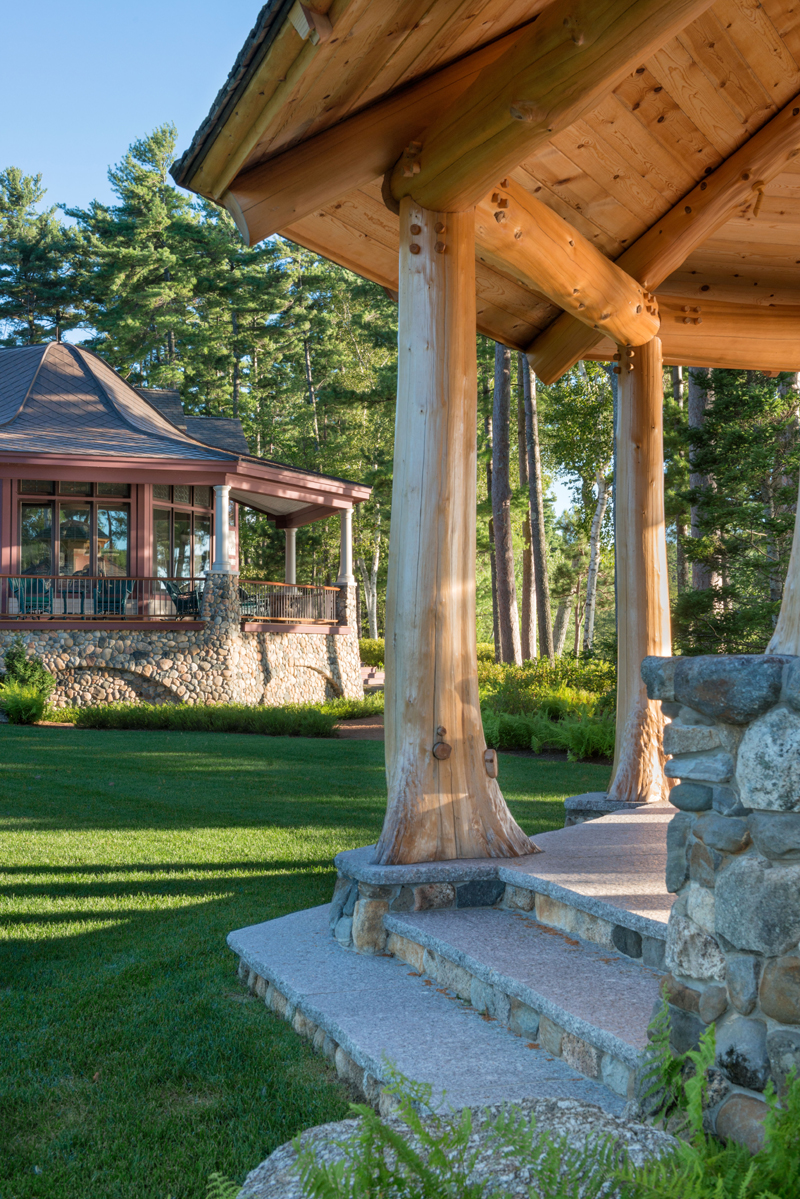 The supporting pillars of the pavilion are cedar trees from Maine. 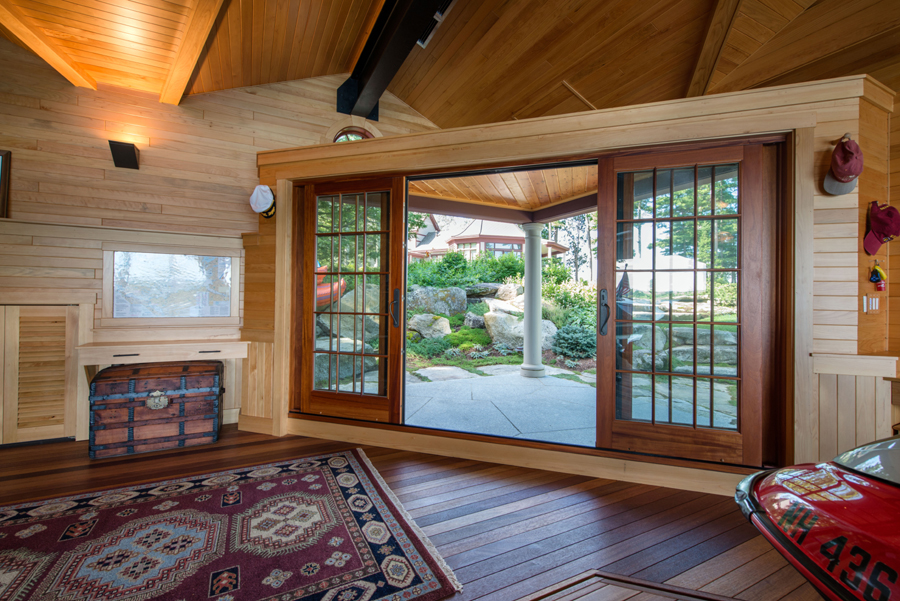 The boathouse’s fan system controls humidity so well that it’s possible to keep a carpet on the floor.

The peaked roof lines and trim colors of the boathouse mirror those of the other buildings on the property. 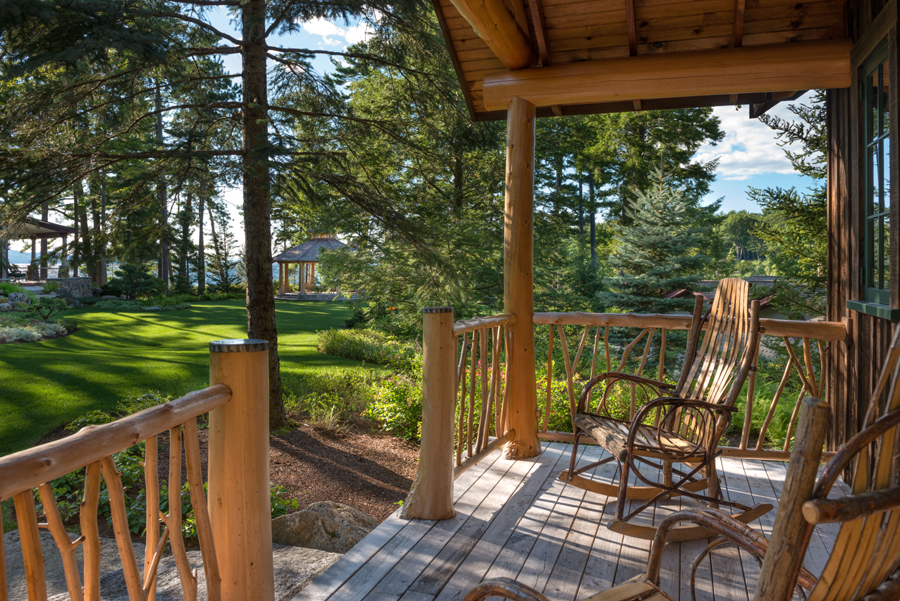 The cabin was “fixed up” to serve as guest quarters but still retains its rustic appeal. 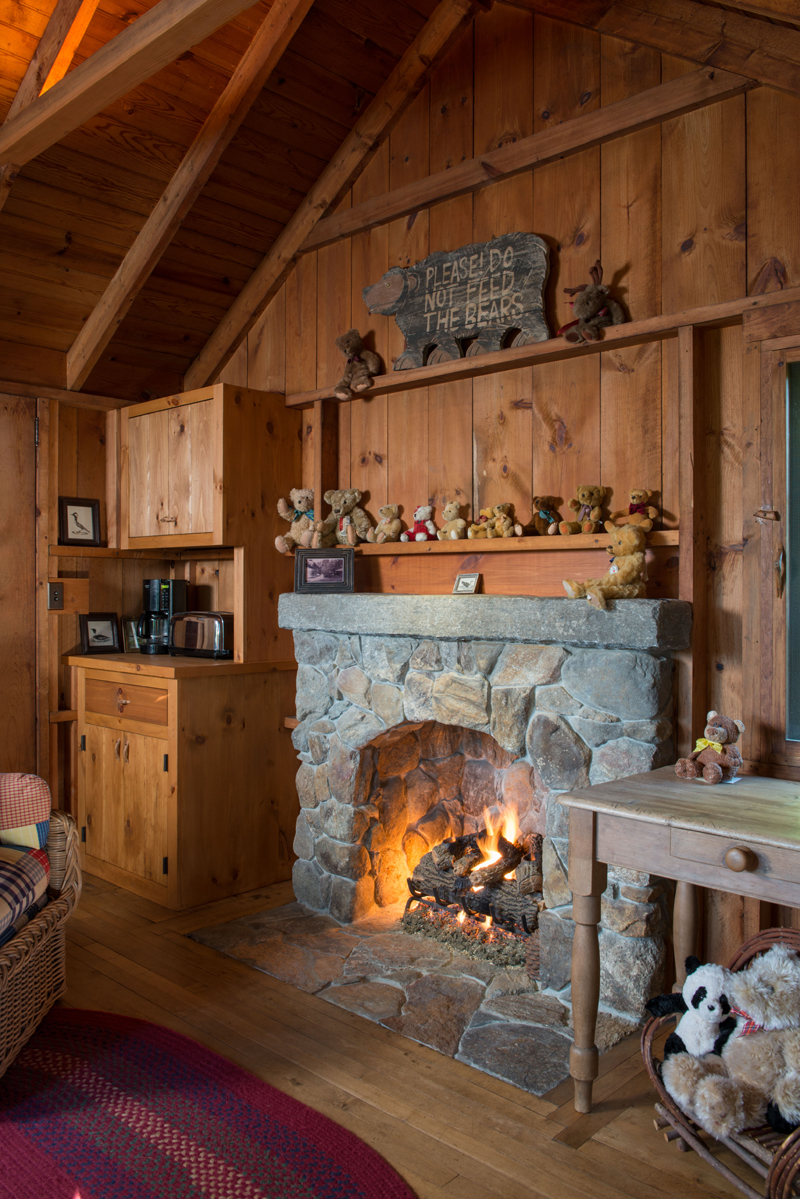 A new fireplace as well as warm wood walls and ceiling provide a cozy interior for the cabin.
Categories: Notable Homes & Homeowners