Not Your Typical Boathouse

If you were making a list of architectural styles seen in New England, you’d include Colonial, Federal, Georgian, Greek Revival and maybe even Richardsonian Romanesque, named for the architect of Boston’s extraordinary Trinity Church. But Adirondack? That’s a style you’re most likely to find on the other side of Lake Champlain. Although Adirondack-Style buildings and furnishings are more common in New England today, such was not the case more than twenty years ago.

In 1988, just four years into his practice, architect Christopher Williams, principal of Christopher P. Williams Architects, PLLC in Meredith, was hired by a couple who wanted to build a main house, guesthouse and boathouse—all designed in the Adirondack Style. “We had seen a magazine cover featuring an Adirondack-Style lake house that really appealed to us,” says the wife. “We also wanted a local architect, and Chris got wonderful recommendations.”

Hallmarks of the Adirondack style

This unique style of architecture—prevalent in the vicinity of Adirondack State Park in New York, the country’s largest state park—took root at the great camps built for America’s aristocracy in the second half of the nineteenth century. The Adirondack Style of architecture was inspired by the hunting estates in Europe, particularly Swiss chalets, which were built from wood.

In New York, builders used native, natural materials inside and out to give their Adirondack-Style structures a rustic appearance. Roughly dressed limbs and roots of native trees, with their natural curves and knots, were used to create architectural ornaments, such as porch railings, gable screens, decorative trim and all types of woodland furniture (some quite whimsical in design). Native fieldstone was used for chimneys, fireplaces and foundations. 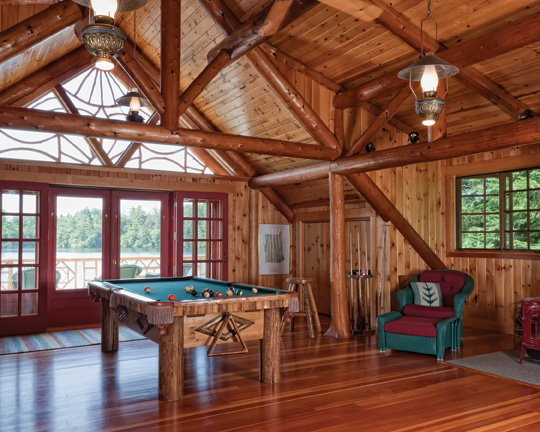 The homeowners wanted the second floor of the boathouse to be a play space for their grandchildren.

Williams’s clients decided to begin their lake-house project with the boathouse. “We wanted to experiment with how to use the logs,” the husband says.

“At the time, this boathouse was the first Adirondack-Style structure in New England that I’m aware of in close to one hundred years,” Williams says. “For this building, the logs were the actual structure and not just a decorative detail on the inside.”

“At the time, this boathouse was a labor of love and the first Adirondack project I’d done,” says David Frost, owner of White House Construction in Gilford, whose staff has since built many of Williams’s buildings.

Because he had never designed a “rustic” style of house before, Williams suggested he, Frost and the homeowners visit the Adirondack Museum in Blue Mountain Lake, New York. “I had read a book called Adirondack Furniture and the Rustic Tradition by Craig A. Gilborn, and there were lots of references to the museum,” Williams says. Gilborn—who was then director of the museum—was enthusiastic about Williams’s design, and took him, Frost and the homeowners to see some of the camps and private residences that were in the book.

While logs were going to be used for the upper level of the boathouse, Williams designed a steel frame for the lower level, so the homeowners could lift their boats out of the water for winter storage.

One of the most striking aspects of this boathouse is the design of its railings and gable ends. “People always say to us, ‘Oh, you own the house with the marvelous Adirondack railing,’” says the wife.

That work is the result of the collaboration between Williams, cabinetmaker Howard Hatch and his business partner at the time, Olof Ekbergh. Hatch, a member of the New Hampshire Furniture Masters who now makes his home in Maine, found inspiration in the Victorian Stick Style of architecture, which has exposed trusses and other “stickwork” much like the Swiss chalets. (An interesting side note is that the term “Stick Style” was coined by Yale University professor of architecture Vincent Scully in the 1950s; Scully, the father of Keene architect Daniel V. Scully, is also Williams’s uncle.) One of the other features of Stick Style is its applied ornamentation of geometric patterns.

Hatch says he saw some common design elements between Stick Style and Adirondack-Style. “Both drew upon simple geometrics using squares and rectangles. In the Adirondack-Style, you see lots of wagon-wheel shapes that reflect the area’s agrarian roots.”

In order to incorporate the wagon-wheel pattern into the design, Hatch and Ekbergh went to a ravine near North Conway and found the ideal building material: saplings that were curved because they were growing on a slope and needed to straighten up to reach the sun. “These wound up being the perfect quarter circles you see in the corners of the gable ends and also in the railing that faces the house,” Hatch says. 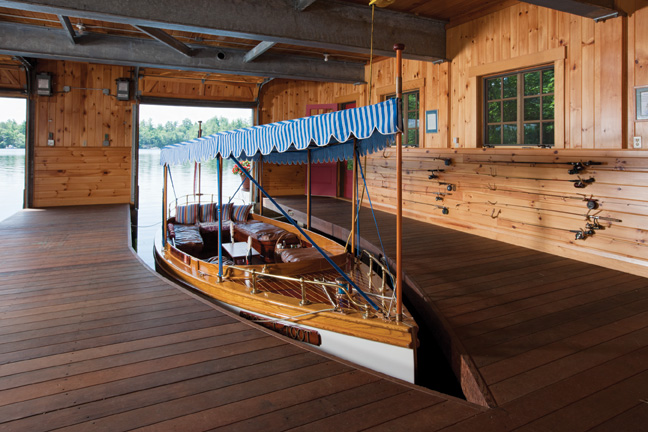 The first floor of the boathouse features a slip crafted specifically for the homeowners’ electric launch.

To construct the railing, Hatch used a bird’s-mouth joint. “Into the horizontal post, you cut a bird’s-mouth shape that wraps around the vertical—and there are hundreds of these joints in the railings. You take a measurement, you make a guess, then a scribe, then a cut. With two or three tries, you get it to fit.”

Inside the thirty-four-foot by forty-eight-foot boathouse, the first floor has two slips for boats in summer; in winter, there’s room to store five boats, canoes and kayaks. The second level is enjoyed as a game room by the homeowners’ grandchildren and as a yoga studio by the homeowners. “It’s a great space, and we use it a lot,” the wife says.

“But you can’t build a boathouse like this anymore,” Williams says. State regulations preclude boathouses with a second level and 2010 rules limited the size of boathouses to nine hundred square feet.

“For this boathouse, we are grateful,” says the wife. “And Chris was the major reason for the success of this building—his design is wonderful.”