A Bright New Future for a Classic Home 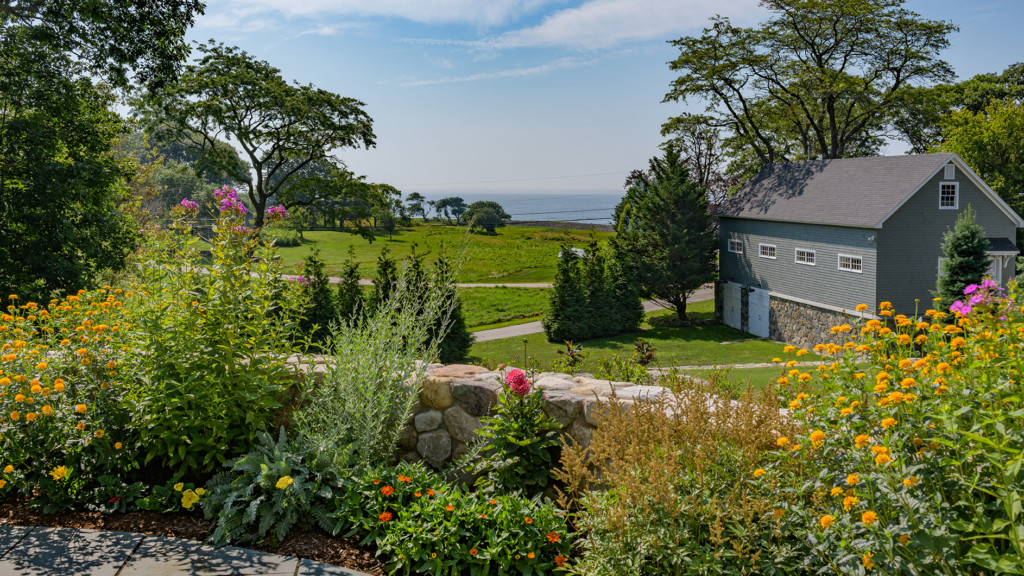 This old-fashioned pastoral view to the ocean, framed by colorful summer flowers—by Jacquelyn Nooney Landscape, Inc. in Eliot, Maine—has been carefully constructed and preserved. The outdoor patio provides height and an inviting viewing platform. The barn, of necessity, was reconstructed on its old footprint.

Indoor-outdoor living has become standard for newer homes, but introducing this feature to older, more conservatively designed homes takes skill. Transforming a home to this aesthetic means having a deep sense of place and the vision to see its potential. After living in her “new” home in Kittery Point, Maine, for about a year, Deborah Coffin knew a renovation was in order, and she had great clarity about what needed to be changed.

First, the garage was not attached to the house. Consequently, the walk required shoveling in the winter. The concrete front porch that faced the ocean was just four-feet wide and wasn’t very inviting. Also, the gardens were overgrown. Next, on the first floor, she wanted to add a master bedroom, an office, a laundry and an elevator. Many of these choices were, to her mind, just common sense—good for her and for the home’s resale value. Additionally, for Coffin—an accomplished spinner, weaver, quilter and needleworker—a studio was a must.

Having just completed the renovation of a nineteenth-century lake house that belonged to her family, Coffin knew she needed a superlative, highly collaborative team who could get the job done.

Coffin knew she could depend on Annie Ballin, of Annie Ballin & Company in New London. For Coffin’s lake house, Ballin was the interior designer and project facilitator, and was delighted to work with Coffin again on the house in Kittery Point.

“Deb and I have worked together for about ten years and have a great working relationship,” Ballin says. “This is the third house we have worked on together.”

Barry Chase and his cousin, Eric Chase, built the Kittery Point house in 1991 when they were both just twenty-eight years old. Despite their youth, they were both experienced builders; they come from a long line of carpenters, all from Wells, Maine. “I think I could drive a nail before I could walk,” Barry says with a smile. 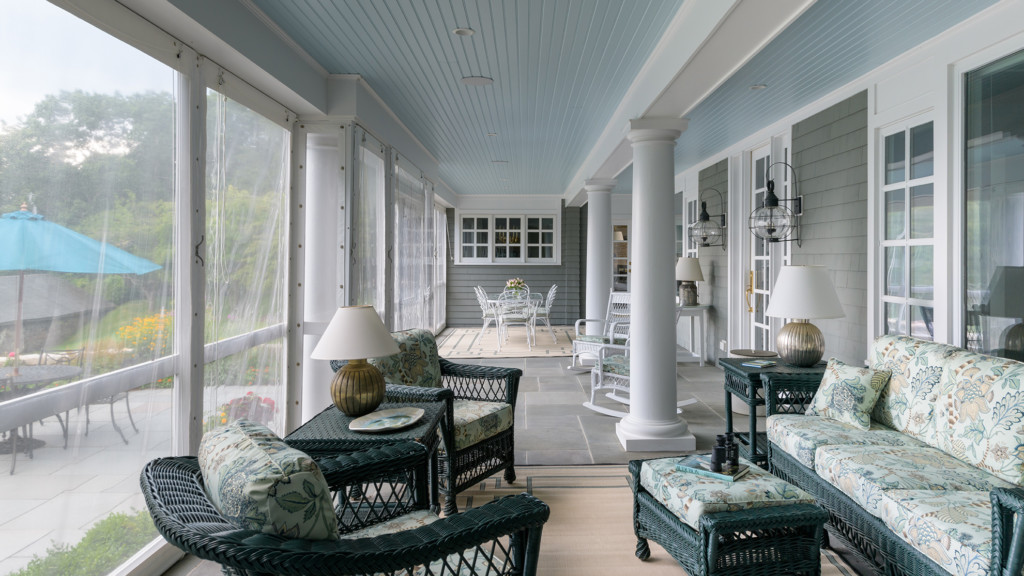 As Coffin and her team worked to develop a plan for the house, a growing sense of place informed their decisions. The plan, of course, included the list of changes, but their collective vision began to include the way light played on the ocean side of the house. The view was extraordinary. Looking out at that long pastoral descent to the ocean and, then to a far horizon, the view evoked a much older time. There was even an old barn tucked into the hillside below. There was also the house itself—a dignified, symmetrical home with paired chimneys, a center hall and two short wings on either side.

Ballin immediately suggested flipping the kitchen from the “front” of the house to the “back,” ocean side of the house to really embrace that view. In effect, the whole house became reoriented to the ocean.

“Now the kitchen is full of light,” Coffin says. “And I love the barn. I was a farmer in another life and used to raise sheep. So, this landscape has a lot of meaning for me.”

Creating a new front entry became critical. The new entry is less formal, yet it’s still elegant and suitable to the house. Attaching the garage meant adding a mudroom, and the office became a part of that new structure, which connects to the kitchen.

As for that concrete strip that passed for a porch? That became a larger screened-in porch, and outside, a half-moon patio was added to increase engagement with the view. To maintain the orderly symmetry of the house, a small, enclosed sunroom was added to twin up opposite the kitchen’s new breakfast area. This small addition maintains the two short wings on either side of the house.

“Doing a renovation like this is a bit of a Rubik’s Cube,” Banow says. “As you move one piece, something else has to give. Often after a renovation, a house will ramble a bit. I’ve been in some old seaside cottages that you needed a GPS to get around in. What’s great about this renovation is that Deb really got what she wanted, and the house has maintained its character and symmetry.” 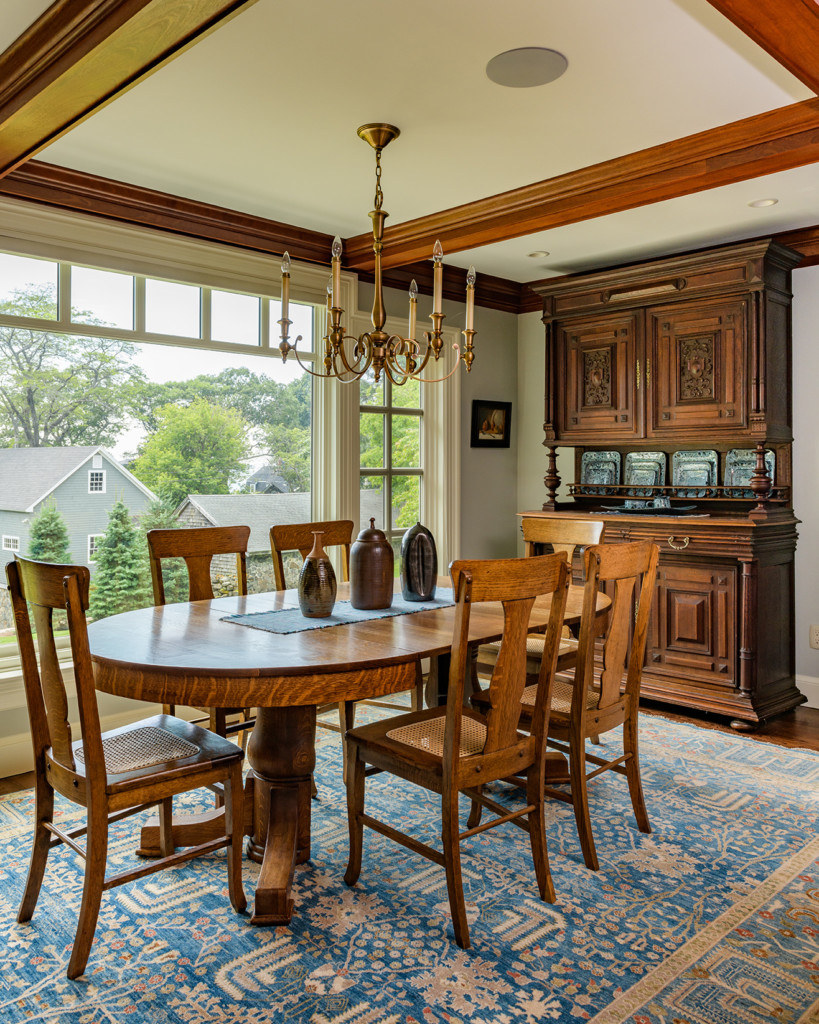 An antique oak buffet and hutch with dining set and chairs combined with an elegant chandelier brings a cool mix to the kitchen’s breakfast nook.

Throughout the house, the fine craftsmanship of Barry and his crew is apparent. He honed the design in each room—from the coffered ceilings to mahogany cabinets, bathroom vanities and beadboard. Of course, which details to choose was often the result of extensive conversation.

A large window in the breakfast area of the kitchen has thick muntins for small panes on each side and across the top of the main window. The effect is reassuring—framed, this expansive view becomes manageable and something to explore visually. Plus, the window complements the coffered ceiling.

“The muntins were Deb and Annie’s idea,” Barry says. “It really worked out.”

Space throughout the kitchen is generous. For example, the distance between the stove and kitchen island is, Chase recollects, about four feet wide.

“We designed the kitchen to be a workhorse with generous pathways and surfaces,” Ballin says. “Great for a crowd, but not overwhelming for a single cook.”

At Atlantic Design Center in York, Maine, with the assistance of design consultant Cathy Rosen, Coffin and Ballin made discerning selections for the various baths. In the downstairs powder room, a marble mosaic with red onyx accents plays beautifully against mahogany woodwork. In the master bath, a mosaic floor combines waterjet glass fabrication with marble tile. 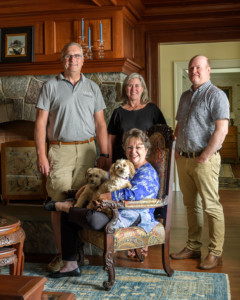 As a child, Coffin learned needlework from her grandmothers, and her early love of crafts has continued throughout her life. Since 1988, she has been a juried member of the League of New Hampshire Craftsmen and served as a member of their board. She is also a past president of the New Hampshire Spinners and Dyers Guild. As a quilter, she participates in Project Julia, which donates quilts to women and their families who enter shelters through Turning Points Network in Newport.

“Throughout my life, doing crafts has been a grounding force,” Coffin says. “It’s taught me patience and determination, and has brought me joy. Through crafts, I’ve made wonderful friends and try to

make a contribution to the greater good.”

Now her meticulous gaze fell to furnishing the house. There were family pieces to incorporate, including family portraits, found in her other home. After a bit of sprucing up and a bit of research to find out who was depicted in the portraits (family all), up on the walls they went.

Still Coffin needed rugs, some furniture and other pieces that soften a room.

Ballin clearly enjoys sourcing materials for Coffin, and together they developed a palette for the house. “Deb has a great eye,” Ballin says. “Her style is traditional, and her passion for history, fine art and craft inspires me to incorporate those elements.

“Being a weaver, Deb looks for fabric composition and color,” Ballin says. “Fabric vendors—such as Colefax and Fowler, Kravet, Cowtan & Tout—are go-to sources for me.”

Ballin has a long-standing relationship with Little River Oriental Rugs in Concord, and works with proprietors Tressa Kosowicz and Gerry Carrier. Together, they found many well-sourced tribal rugs made by refugee Afghani women in Pakistan. As Kosowicz explains: the wool for the rugs is hand-spun; men dye the yarns using vegetable dyes; then women weave the rugs at home since they are not allowed to leave the house without a male escort. This cottage industry enables these women to earn money for their families. Coffin—a hand spinner herself—has taught the art of vegetable dying and consequently, she has a deep appreciation for the craft entailed in making these rugs.

“Deb and I would often drive toget-her, and when time allowed, we would stop at an antique store or two on the way back,” says Ballin. “RS Butler’s in Northwood was always a favorite!”

At RS Butler’s Trading Company, co-proprietor Colleen Pingree refreshes the inventory weekly. As for working with Coffin and Ballin, Pingree immediately responds: “They were a blast! Their taste was very eclectic. They bought wall décor, things for the garden or just something that fit the vibe of the house. I loved working with them!”

In George’s Mills, Coffin and Ballin worked closely with Cory Flint, owner of Prospect Hill Home: Antiques, Fine Art, & Home Furnishings. “They’re sophisticated buyers. They found a grandfather clock and dining room chairs here among other items,” Flint says. “They’d let me know what they were looking for, and I’d keep an eye out for those items.”

Coffin also commissioned work with Glen MacInnis, a ceramicist based in Auburn known for his sea turtles. Coffin had years ago purchased a dining table by Gary Armstrong, a fine furniture maker in Brentwood, and then commissioned a corner cabinet cupboard and breakfront display case. These pieces—along with others that she or her grandparents, who spent time in China, collected over the years—give the home a warm patina.

Ballin really enjoys putting the final touches on a project. “In the end, I take the time to place my client’s heirlooms and treasured possessions with kind intention,” she says. “I like to think these finishing details are my last gift to the homeowner. When they walk into a room, stop to look at a bookshelf or see a favorite family photograph, they know they are home.”

In reflecting on the project, Coffin says: “It was a great team. We all worked really well together and had a great time.”