A Cabin in the Woods 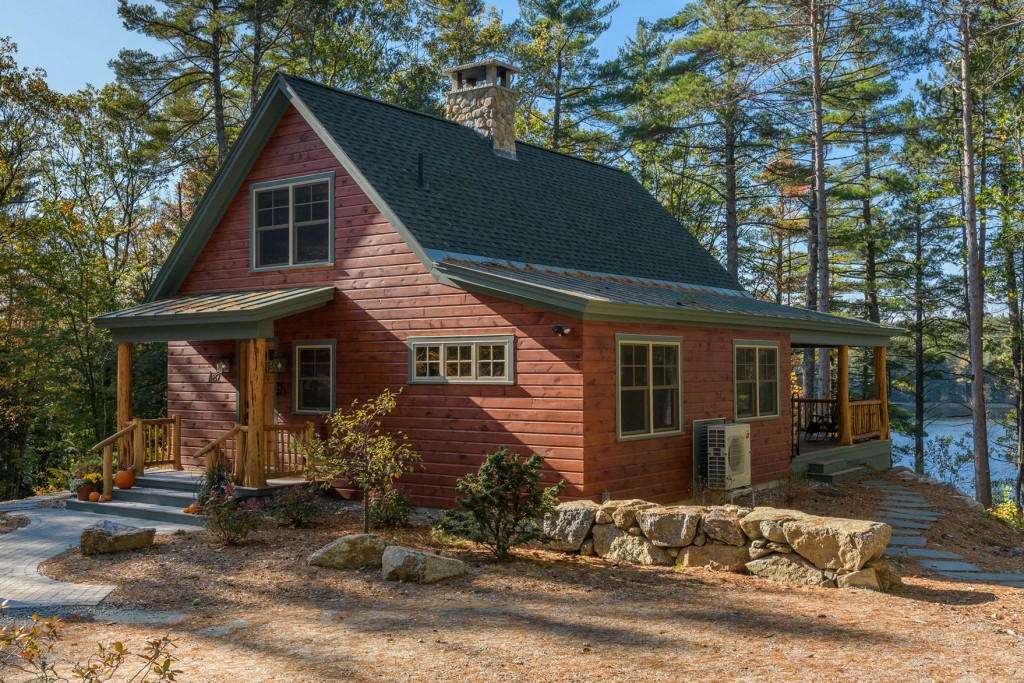 The cabin was designed by Old Hampshire Designs, Inc. in New London as a simple sanctuary where the homeowners could be one with nature.

Rumor has it that customers who purchased a tailored suit in Boston back in 1904 received a deed to a forty-foot-by-eighty-foot lot on a small lake in New Hampshire’s Sunapee area. The rumor is as good an explanation as any for why a thirty-acre lakefront property had been carved up into three hundred, tiny, individually deeded lots. The resulting title nightmare dissuaded anyone from actually building on the property, leaving a single 1901 cabin in tranquil isolation for generations.

In 2016, a Boston-area couple found the property after a year-and-a-half search to find a home for the second half of their life that also provided a getaway for extended family. The husband had grown up spending summers at a rustic family cabin in the Adirondacks. He wanted to continue the tradition year round, but he and his wife wished to be close to Massachusetts to help her mother. They began looking for property in New Hampshire that met their key criteria: on a lake, wooded, quiet and within an easy drive of Massachusetts.

The couple fell in love with the Sunapee-area property and began the daunting process of cleaning up title issues. After months of title work, in 2017, the couple began construction on a 1,274-square-foot cabin in the location of the original homestead, which was beyond repair. The cabin would subsequently be accompanied by a primary residence a few hundred yards away.

The homeowners turned to Old Hampshire Designs, Inc. in New London to develop the plans and construct the cabin, but the vision was all the homeowners’. The husband would be using the cabin as a studio for his holistic-health coaching practice, and it was important for him to “feel the energy of the trees in the space we were creating.” Husband and wife envisioned a little cabin in the woods that was built with the oak and pine trees felled on their property.

The retro look of the kitchen is reminiscent of the camp kitchen the homeowner grew up with in his family’s rustic summer cabin.

“This was such an interesting project, because the clients wanted to use their own resources and were just so interesting themselves,” says Jay Tucker, president of Old Hampshire Designs. Trees that were logged to make way for a driveway, the cabin and home site were rough milled into fourteen thousand board feet of lumber. The interior lumber was then kiln-dried in North Haverhill by Kiln Works Co. LLC.

Aside from the framing lumber, all wood for the project came from the property. The white pine was used to create classic, exterior novelty siding, which features a beveled reveal in a pattern dating back to the end of the nineteenth century. Inside, floors are clad in the oak; while the pine is used on the walls and ceilings. The homeowner wanted to let the beauty of the wood speak for itself, maintaining the colors and knots found in nature. To add visual interest, the construction team accented the pine interior paneling with red oak trim.

The homeowners say they love the imperfections that came from using their own wood. Some of the pine panels have a slight blue stain from the drying process, but the owners couldn’t be happier. “The crew was artful on how they used the panels with stain so the quirks add beauty and interest to the space,” they say.

Trees are celebrated as a natural art form in stunning railings and posts crafted by Dan Benedict of Benedict Brothers Construction in Bradford. Benedict, who has developed a following for his hard-to-find architectural twig work, hand-stripped branches and logs left from the clearing done on the property to create sculptural log-and-twig railings.

It was a little more challenging to fulfill the homeowners’ desire to use tree trunks as support posts in their open floor plan and on the porch. Benedict and his crew scouted the property carefully for appropriately sized tree trunks, then manually dug around their bases to extract a portion of the roots to provide the natural look that the homeowners wanted. “The most challenging part of the tree project was plumbing a round tree with a flared flat base on the floor,” Benedict says. “You have to think outside the typical carpenter’s box.”

The floor-to-ceiling stone fireplace is the focal point in the open-plan interior. The homeowners were delighted they could incorporate the keystone from the original cottage’s fireplace into the new one.

The homeowners’ goals for their cabin were very similar to those of Henry David Thoreau when he built his famous cabin in the woods so he could “live deliberately.” The owners of this cabin wanted to create a serene sanctuary where they could be close to nature, think deeply, meet with clients, and have some privacy when family members or guests came to stay at their main residence on the property.

They collaborated with Jim Driesch and Sam Tucker at Old Hampshire Designs to create a simple, open-concept floor plan. An upstairs sleeping loft and a downstairs bedroom provide accommodations when family or friends are in town, but the cabin is primarily used as a work studio and retreat for the couple. The husband hosts drumming circles in the main living area, or he retreats to the adjacent office area to think and work at the live-edge desk that wraps around the space.

A floor-to-ceiling fieldstone fireplace—created by Josh Dunlop of Stonehenge Masonry and Stove, LLC in Tilton—is the heart of the cabin. The couple saved the fireplace keystone (the stone at the center of an arch) from the original 1901 cottage and incorporated it into the new fireplace to, as the homeowner says, “honor the energy of what was there.”

To complete the compact cabin, the team incorporated an expansive porch overlooking the lake, a camp kitchen with retro-looking appliances, and a serene bathroom with the pine paneling and tile the color of the lake on a cloudy day.

An experiment that worked

The homeowners laugh that they have a tendency to do some “crazy, visionary thinking” and that “it can be hard for people who typically go square and straight in construction to follow our desire to go wiggly, squiggly.” On this project, the team certainly rose to the challenge, innovating as the need arose to make the homeowners’ vision a reality.

The hard work paid off and the cabin was named the 2019 winner of Excellence for Small Home Design at the New Hampshire Home Design Awards. More important, the property is the tranquil, simple cabin in the woods the homeowners envisioned.