A homeowner’s renovation and one-of-a-kind décor gave new life to a Hollis house. 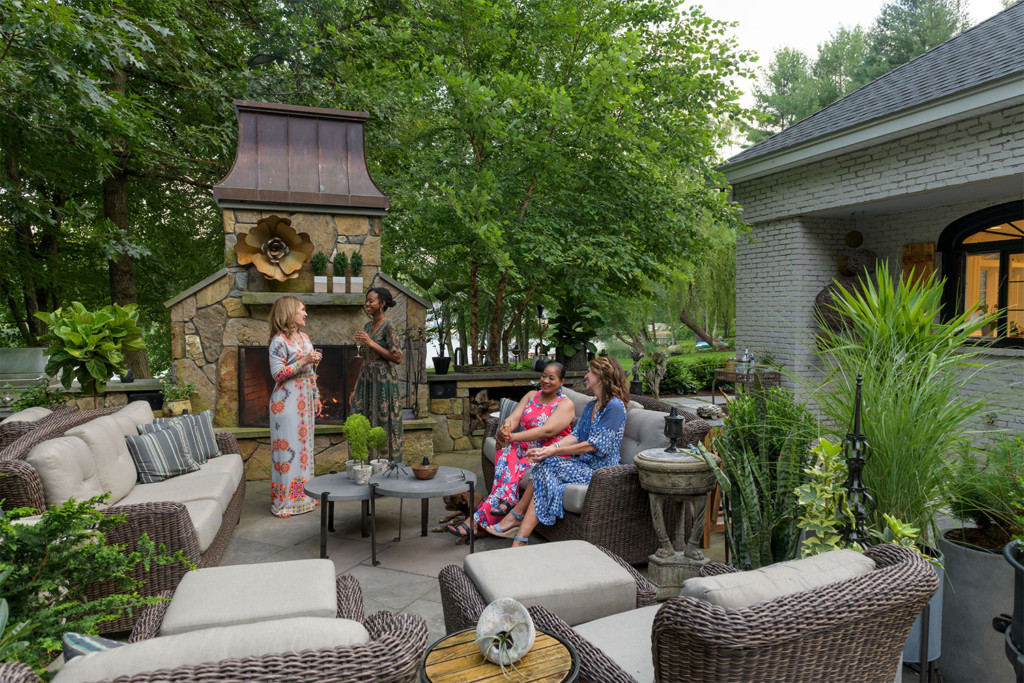 Homeowner Cindi Owning (left) transported what she loved about living in California to her home in New Hampshire, including outdoor spaces for entertaining. Pictured here from the left are friends Natalie Lewis, her mother Nora Lewis, and Maureen Shambo.

Talk about a transformation. Now: It’s a beautiful, exquisitely decorated lakeside home. Then: An abandoned, flooded mess with a yard strewn with old mattresses, garbage and fallen trees.

“It literally looked like a hurricane had hit it,” says the now-owner Cindi Owning. Despite the debris, Owning quickly saw the property’s potential. It was located in the lovely town of Hollis; it had a fair amount of lake frontage; it had three bedrooms, enough to accommodate her many guests; and its basic structure was intact. But, most of all, Owning says, “What I loved about it was that every room had a view of the lake.”

She bought the house, and, over the next several years, proceeded to resurrect it in her own distinctive way. It is, to say the least, eclectic. Except for the kitchen, which is mostly traditional, nothing is what you expect to see. The home is wildly unpredictable, with something surprising at every turn.

“I blended all my travels, my culture, my zaniness and my uniqueness into my home,” Owning says. Much of that blend comes from California, where she lived before her move to New Hampshire. In downtown San Francisco, she says, she “lived in a diverse population with very interesting, unique people, and I brought back some of that diversity.” 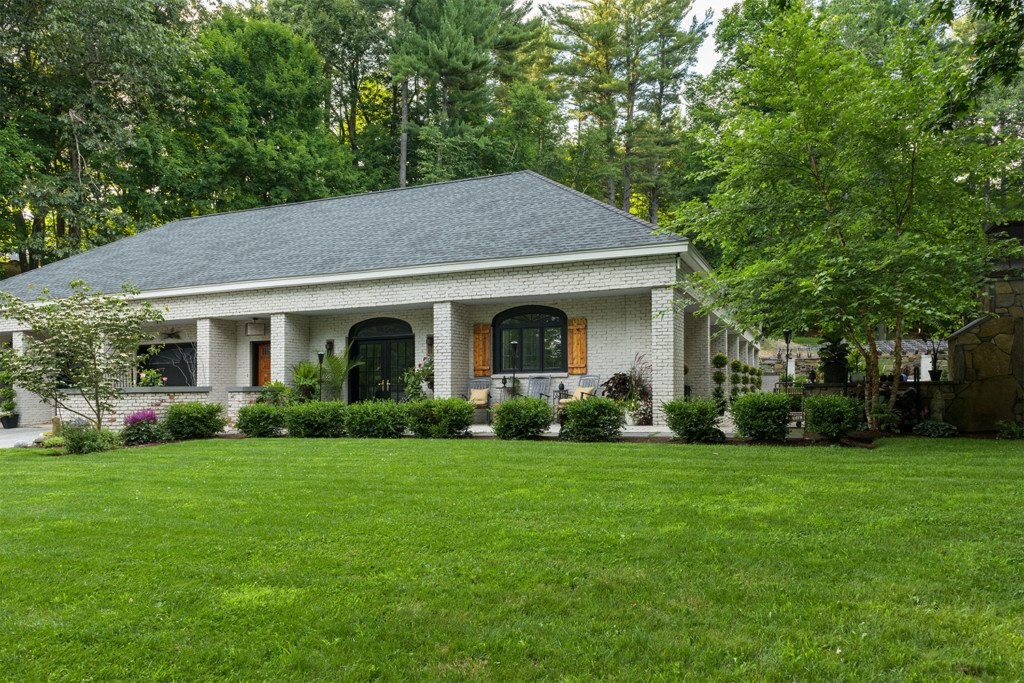 For homeowner Cindi Owning, the most significant feature of the one-story home is that each room has direct access to the outdoors. All three bedrooms have French doors that open to a large patio with the lake just beyond.

She also drew on her interest in horses (“I was riding dressage”), her time as an operating room nurse (“I’m used to seeing naked bodies”) and her comfort with mounted animal heads (“My family were hunters”).

But her approach to the décor was also practical, geared to lakeside living. “I wanted people to not worry about tracking in the sand or wet clothes from being on the boat,” she says. “I wanted it to be comfortable.” To that end, there’s no carpeting and much of the furniture is what Owning terms “livable.” In fact, the living room sofa is from Costco.

Aside from Costco, she shops at “really random places,” from consignment shops to flea markets to yard sales to HomeGoods to the Design Center in Boston. “I buy anything that catches my eye,” she says.

Defining her own design

The palette throughout the home is neutral with splashes of color, mostly in the paintings and pillows. The pillows on the living room sofa are in offbeat patterns with vibrant color, but paired with a more muted pink, Owning’s favorite color.

On one sofa wall, there’s a collage of mirrors that Owning says “brings in a kind of Hepburn, ’50s-esque look” and adds a formal touch to an otherwise informal room. The other sofa wall has a number of mounted animal heads, most of them from her family’s hunting. “Long before antlers and what I call ‘dead heads’ were part of everybody’s home décor,” she says, “these were staples in my home.” 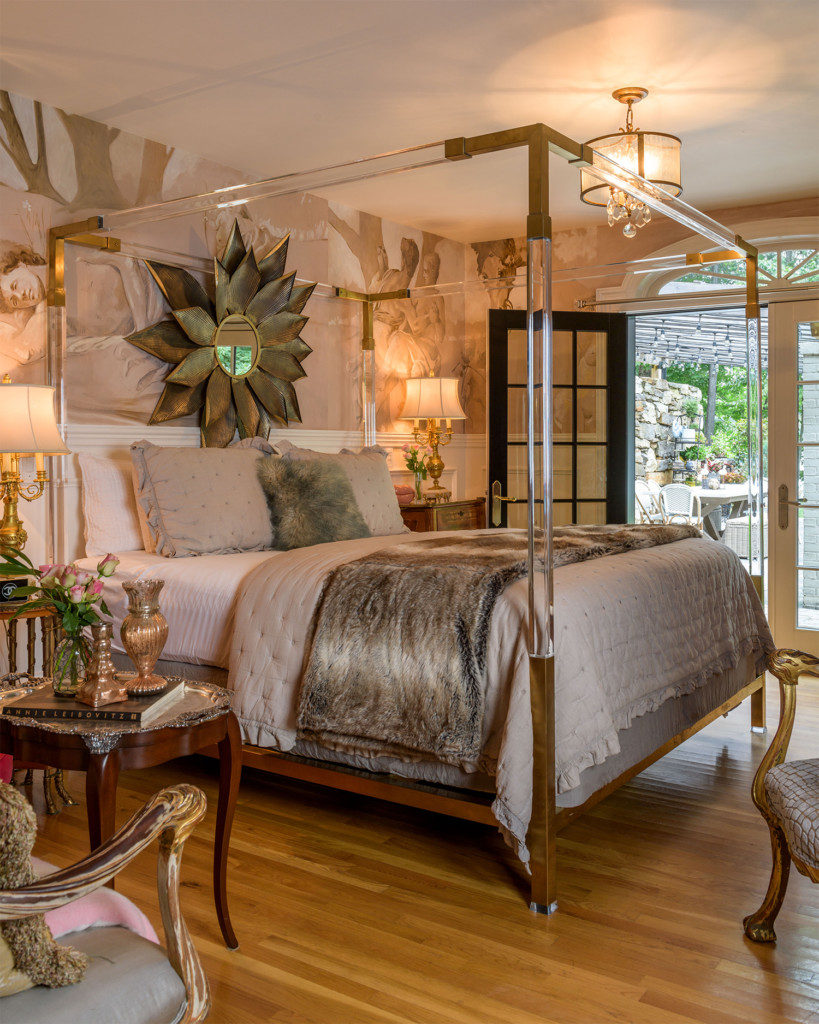 A hand-painted mural of water nymphs and Zeus spans the wall above the substantial wainscoting in the master bedroom. The neoclassical style of the mural is combined with a contemporary four-poster bed and an art nouveau settee and chair.

Also making a statement is the furniture in the dining room. The table is surrounded by Gothic-style carved chairs that are stripped to the raw wood. On one wall is an even more heavily carved sherry cabinet. “I really like things that took a lot of time and care to put together,” Owning says. “I appreciate that craftsmanship.”

The massive hutch on the other wall contains her collection of formal china and crystal, which she brings out on
occasion to, as she says, “dress things up” and express the less-practical side of her personality.

Her eclectic personality is on full display in the master bedroom. It is a beautifully blended mix of styles and periods, with a contemporary four-poster bed centering the room; a seating area with an art nouveau settee and chair; and on the walls above the substantial wainscoting, a neo-classical mural of water nymphs and Zeus. The heavy canvas mural—which had been made for the entryway and hallway in her California home—was removed and transported to New Hampshire. “I decided to make it more personal here,” Owning says. “I put it in my master bedroom and bath.”

In the bath, the mural’s central figure is a self-portrait of the artist, Michael Costello of Boston. Otherwise, the space is populated by female nudes, with a stray foot or dog interspersed. “I mish-mashed it randomly,” Owning says. 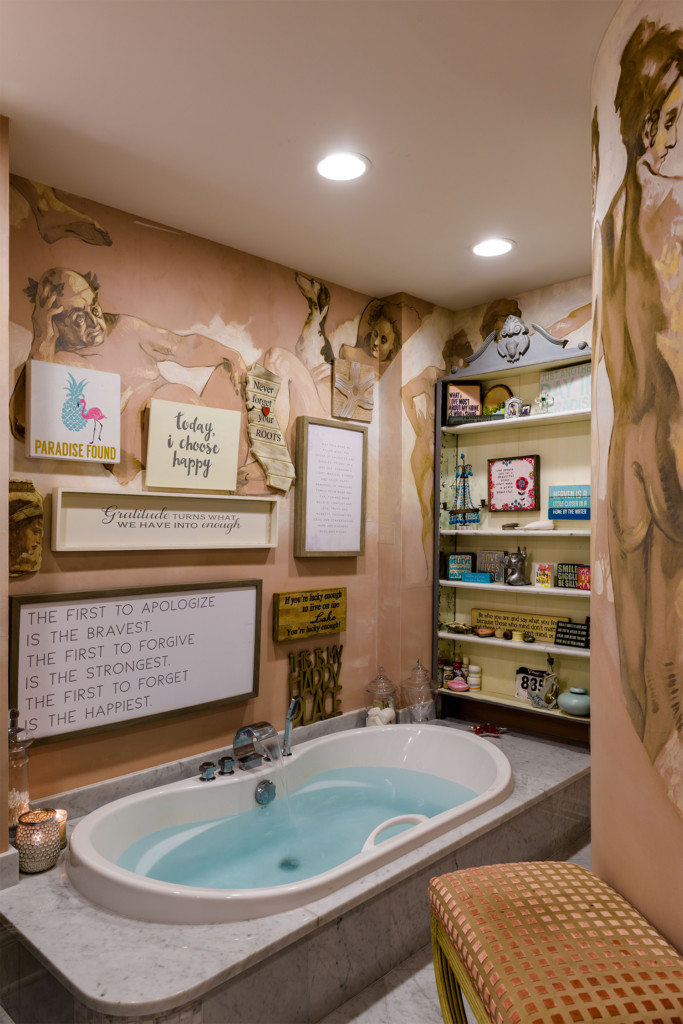 Another mural, comprised of mostly female nudes, is used in the master bath. Also on the wall are inspirational messages that are visible from the tub.

“Cindi has the ideas, I’m the hands,” says Chris Renaud, of CPR Home Restorations in Londonderry, who was charged with the challenging job of installing the murals. He says the piece for the bath was “giant” (between eight feet and ten feet long) and, being heavy canvas, weighty. “It was quite involved, but it all came together,” he says.

In addition, Renaud did the wood-working throughout the home, including the impressive, hand-built, mahogany entrance door. “It was quite an undertaking,” he says. But his most extensive work was in the kitchen, where he constructed the cabinets from scratch.

The lower cabinets are set on a row of bricks from the original kitchen, making the counter six inches higher than the norm. The upper, glass-front cabinets have a leaded design with a larger-than-usual cornice. “It’s the biggest I’ve ever worked with,” Renaud says. “It’s five or six inches.” As another distinctive element, some of the cabinets—such as those to the right of the island—can be accessed from two directions. Over the La Cornue stove is a large pass-through to the dining room.

The kitchen’s design is Owning’s alone, and she had two major goals. “I wanted the eye to flow outside when you’re preparing meals,” she says. “And I wanted a lakeside feel, nothing dark.” The light paint palette and the light quartzite countertops combine with the large transomed windows to accomplish both.

Owning also designed the outside spaces, with the help of Eric Buck, of Terrain Planning & Design LLC in Hopkinton. To take maximum advantage of the lake view, and the fact that all the rooms have French doors that open to the patio, Owning and Buck created what Buck calls “a series of outdoor rooms that play off what was happening inside the house.”

That connection starts at the front of the house with a comfortable seating area and a large fireplace, made with stones from the property. “It’s a focal point, an architectural statement,” Buck says. And, he adds, its height and heft provide a contrast to the lineal profile of the house.

Next is another seating area outside the guest rooms, perfect for morning coffee, with interesting gnarled wood chairs. And at the back of the house, outside the master bedroom, there is a hidden outdoor shower that’s cut into the rock wall the house is set against. Beside it, a generous dining area covered with a pergola.

Buck says the pergola is a “balancing architectural element” that offsets the dramatic fireplace at the other end of the bluestone-paved patio. To define the individual spaces, Buck used a mix of ornamental and native plant material. “And,” he says, “there are topiary pieces that create a sculptural effect, and boxwood hedges that create green walls between the spaces.”

For Owning, it all comes together to create a profoundly peaceful place to live. She says she’s “never felt so at home.” So much at home she says she no longer feels the need to add to what she calls her “zany, artsy” collection: “I’ll live with what I have and enjoy what I have. It makes me smile every day.”