A kitchen and bath get a complete and fabulous makeover. 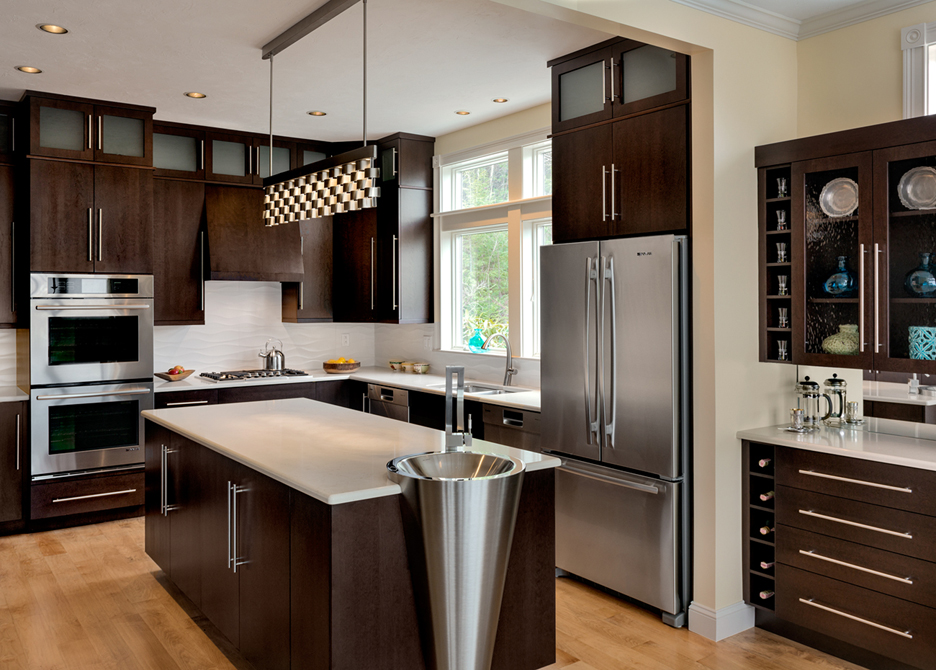 The design of this beautiful Waterville Valley kitchen accommodates the homeowners’ need for both a kosher kitchen and an updated space for entertaining. The main challenge for designer Randy Trainor, of C. Randolph Trainor Interiors in Franconia, was to fit all that was required into a relatively small space.

A kitchen renovation isn’t an easy project—and renovating a space into a kosher kitchen, which requires the separate handling of meat and dairy, is an added challenge. “A kosher kitchen must have two sets of everything,” says this homeowner, who accepted the challenge. There are two sets of dishes, silverware, utensils, pots and pans. Also two sinks, two dishwashers and two ovens.

Jewish dietary laws dictate that meat and dairy should not be cooked together, served together or eaten together.

Foods that meet these, and other, standards are deemed kosher. Making the kitchen in this Waterville Valley home adhere to these laws required much more storage. Also, because the couple wanted to make the kitchen more functional for entertaining during the summer months, more counter space was needed.

The answer came thanks to the combined efforts of the homeowners; Randy Trainor, owner and principal designer of C. Randolph Trainor Interiors in Franconia; and builders Shad and Janel Lawton of the Lawton Company Inc. in Littleton.

“Getting as much storage as possible into a finite amount of space was the biggest challenge,” Trainor says. For starters, she took advantage of the 9½-foot height of the room and designed the contemporary Cabico cabinets to extend all the way to the ceiling. She then added generous pantry cabinets and lots of pullout storage.

To accommodate this extra storage— and the addition of twin sets of Bosch appliances—Trainor moved the sink out of the corner to a side wall and closed off a doorway between the kitchen and hall. A peninsula countertop coming from that wall was replaced with a Caesarstone-topped center island. A small wall between the kitchen and dining room was cut back to make room for the refrigerator. 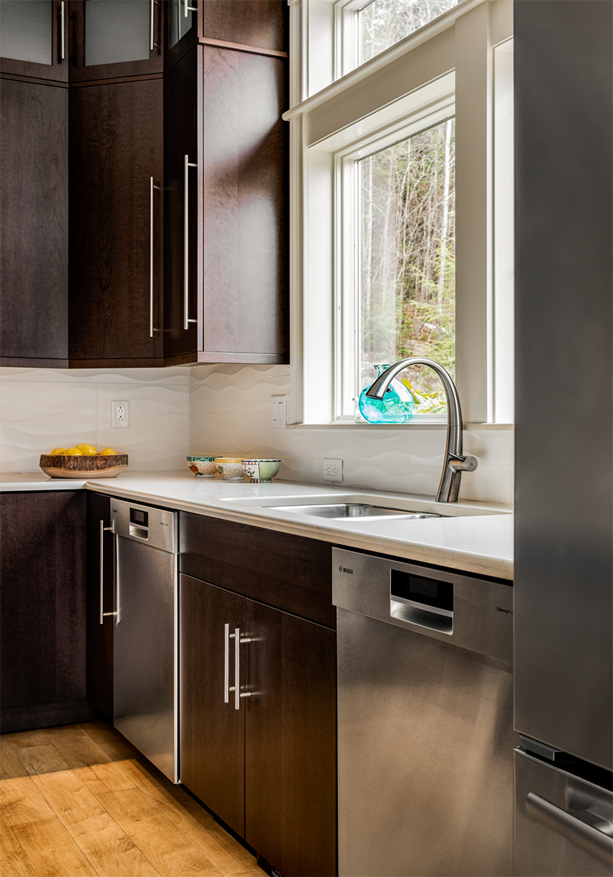 Lighting the space is a Hart Lighting Waveform fixture of woven aluminum with downlighting that shines through. And below it is the focal point of the kitchen—a conical sink by Neo-Metro. The stainless-steel pedestal sink is used by the homeowners for the Jewish ritual of hand-washing for meals where bread is served. “A separate sink for hand washing is not required,” says the homeowner. “It’s really more of a statement piece—something a little different that completed the design well.”

There are also statement pieces in the couple’s bathroom, which was renovated at the same time. Set against the walls of gray tiles from Tile Showcase at the Boston Design Center are stunning pendant lights custom crafted by award-winning artisan Derek Marshall of Center Sandwich.

The color of the lighting is repeated in accent pieces set in the rectangular window wells, and in the blue-themed, glass tile mosaic above the vanity’s double Kohler sinks and Caesarstone countertop. The mirrors and upper cabinets are, Trainor says, “configured to look as flat, simple and seamless as possible.”

Getting the plumbing done—for both the bath and kitchen—was no easy task. The floors are concrete slabs. Janel says her crew had to jack-hammer out space for the plumbing, something that must be done with “planning and sound knowledge of the structural integrity of concrete.” In addition, she adds, great care is needed to protect the existing interior property.

The cabinets, also Cabico with Schaub & Company hardware, combine with the like-colored walls and floor to create a calm, spa-like atmosphere, what the homeowners had asked for.

Before the renovation, the bathroom was, as the homeowner puts it, “pretty old-fashioned” with little storage, an unneeded tub and sinks that were too low. It was also oddly shaped with the toilet sticking out into the room.

Trainor worked with the builders to reconfigure the space. What Janel calls “an awkward, angular wall” between the bathroom and master bedroom closet was squared off to gain additional footage, also allowing the toilet and shower to be moved to the same wall.

The jack-hammering was “not for the faint of heart,” says Trainor. Fortunately, the homeowners didn’t have to witness it. In fact, they were in Florida for most of the five months of construction, seeing it only twice along the way, early in the process.

“Decisions were made over the phone and by email,” the homeowner says. “A lot of people aren’t comfortable letting designers and contractors have full run without day-to-day overseeing by the owners, but we were. Everyone was fantastic.”

Because the couple hadn’t seen the completed redesign, when they finally did, it was “just like on TV” with a big reveal.

“It’s really amazing,” the homeowner says. “Everything has a place. It’s a dream.” 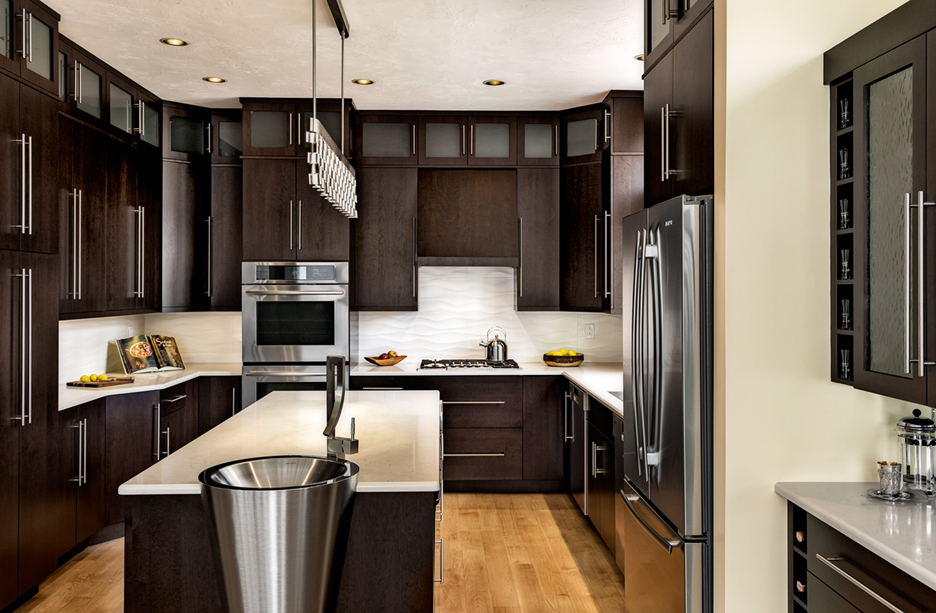 To gain more storage, the cabinets were extended all the way to the ceiling. The clerestory cabinets repeat the design of the window, which was moved from the corner to the side wall to make the space more efficient. 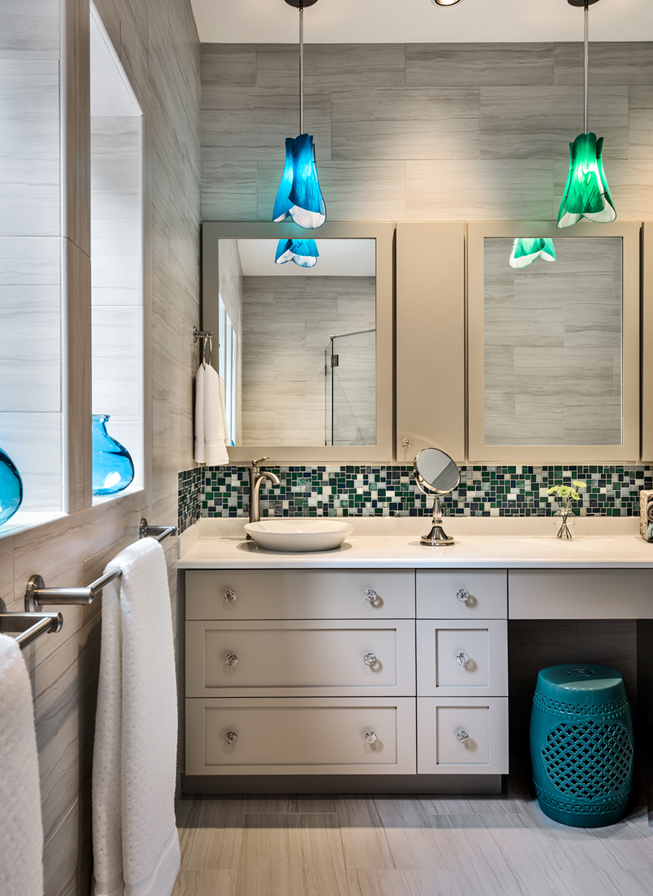 The soft color of the bathroom walls and flooring creates the calm, spa-like feeling the homeowners wanted. Accents are provided by pendant lighting by artisan Derek Marshall of Derek Marshall Lighting in Sandwich, and a glass tile mosaic above the vanity. The mirrors and upper cabinets are configured to look as seamless as possible.
Categories: Architecture and Interiors, Kitchen Designs, Renovation, Renovation & Restoration