Thanks to a creative team—lead by developer Jon Chorlian and architect John Jordan—a Concord house of worship gets rave reviews for its second act as home to ten families. 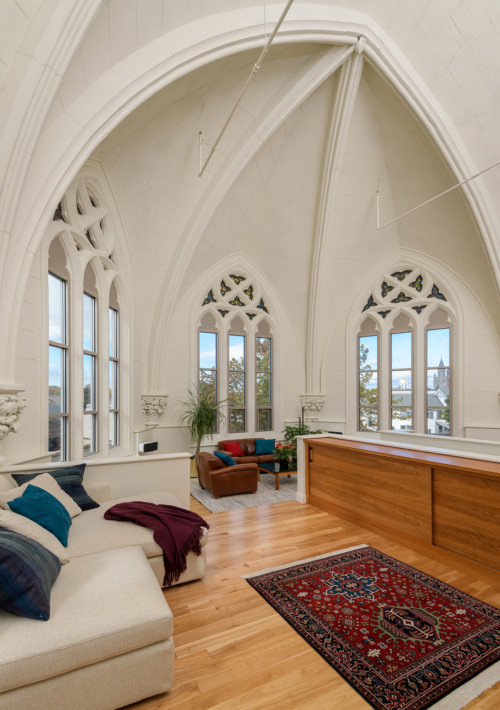 When it comes to architectural design, the form of a building often follows its function. But as time marches on, things change; people come and go—and so do many buildings, sadly. Buildings that manage to stand the test of time are often repurposed, such as those in Manchester’s millyard. That’s a good thing and is also the long story short for the former Sacred Heart Church in Concord, which was cited for Excellence in Historic Restoration at the New Hampshire Home Design Awards in January.

Sacred Heart parish was founded in 1892 when a group of Quebecois families broke away from St. John parish. Two years later, a chapel was built on what’s now the parking lot for the church. By 1918, parishioners had outgrown their space and began raising money for a new, larger church, according to Paroisse du Sacre Coeur published in 1934. The parish purchased the site and hired architect Donald Barbinault of Springfield, Massachusetts, in 1933; the cornerstone was set by November that year. The following September, the new church was dedicated. Almost the entire cost of the project—$180,000—was raised before construction began.

But in 2011, a declining number of priests and parishioners caused the Sacred Heart parish to be consolidated with those of St. Peter’s and St. John the Evangelist—both also in Concord—into Christ the King Parish, according to the Concord Monitor. In 2014, the Sacred Heart church was put on the market, and in 2015, a purchase-and-sales agreement was signed with Concord developer Jon Chorlian. In June 2016, Bishop Peter Libasci lead a final mass and deconsecrated the holy spaces so the building could be converted to secular use. Chorlian took ownership of the building in August 2016.

Chorlian had taken an interesting path to becoming a developer. The son of artistic parents—his late father Jonathan was a well-known potter in the League of New Hampshire Craftsmen and his mother Marissa is a painter. “There was lots of creativity in my family,” Chorlian says. During summers in college, he worked with a contractor doing renovations and homebuilding in the
Seacoast. “I loved this work,” he says. At Harvard College, he studied economics and worked in building maintenance with a cabinetmaker who taught him about furniture making. “From there, it was easy to install a door or window,” he says.

After graduating from law school, Chorlian worked his way to becoming partner at Orr & Reno in Concord, where he practiced law for ten years. He got to see how deals came together and how business was done. “I learned a lot from my clients, how to assess risks and how to take risks,” he says. “But I always had this building thing in the back of my mind.”

So in 2004, Chorlian left the practice of law and devoted himself full time to developing properties. “I became a developer so I could be a builder,” he says. “I love the transformation process of turning houses into homes that people will live in.”

For the next four years, he put what he had learned through his study of law—financing, contracts, real estate law—to work and began developing old houses in Concord into condos. He assembled a small crew and brought in help from John Jordan, of John S. Jordan Design PLLC in Canterbury. An architect since 2000, Jordan had worked for LaVallee Brensinger Architects in Manchester and Christopher P. Williams Architects in Meredith before striking out on his own. Among his projects were the renovations of the Pandora Mill in Manchester, now home of UNH Manchester, and Dean Kamen’s buildings in Manchester’s millyard. “Old buildings are so interesting,” Jordan says. “They have so much craft and lots of design opportunities.” 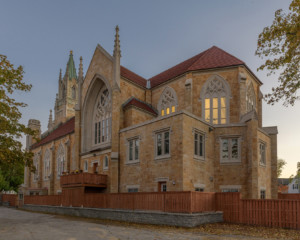 In 2008, Chorlian put his residential development on hold and began working with developer Steve Duprey, of the Duprey Companies in Concord, on large-scale commercial projects in Concord. “I really learned a lot from Steve,” Chorlian says. “As a result, I got to be more comfortable with doing larger projects and saw that I could do them, too.” Chorlian got back to his own residential development in 2013; when Sacred Heart came on the market two years later, the thought of a multi-million-dollar project was no longer daunting.

Once Sacred Heart was under agreement, Chorlian and Jordan began to figure out how to transform the interior space in to residences. “We asked ourselves what to do with a building with fifty-foot ceilings,” Chorlian says. “We’d never had a project as complicated as this.” Their other projects were smaller and only involved moving walls, not adding floors. But with the church, the space had to be sliced vertically and a floor added.

There was one thing that made preserving the church’s architectural integrity easy: as a result of the building’s sandstone exterior, no windows or additions could be added. “These were also practical decisions,” Jordan says, “because the building’s walls are a foot thick.”

Once the building was decommissioned as a church, all the windows with religious images were removed and replaced. “A company called King Richard’s in Atlanta did that work,” Chorlian says. “They specialize in church salvage and will only sell it to other churches.” The Sacred Heart windows, which were called Mysteries of the Rosary, found a new home in Colorado. Fortunately, the colorful and graphic tracery sections of the windows remained in place.

Jordan and Chorlian came up with a floorplan that includes three units on the ground level (they each have nine-foot ceilings) and seven units above. Of those seven, three condos are on each side of the building and the seventh includes the former altar space. All ten units are between 1,800 and 2,000 square feet.

By the time Gary Chicoine Construction Corporation in Weare started work in August 2016, designs were finalized, permits had been lined up and all ten units had been sold. But as Chorlian did with his other residential redevelopments, “I allowed all these buyers to participate in the design process,” he says. “They all chose their own flooring, paint colors, kitchen styles and other finishes.”

One selection all ten owners made were cabinets by W.S. Dennison Cabinets, Inc. in Pembroke. “George Dennison makes the best cabinets,” Chorlian says. “He can build whatever anyone needs, which worked well when homeowners were trying to work within some of the confines of the church’s interior architecture.”

Using Jordan’s plans, Monique St. Laurent, the designer at W.S. Dennison Cabinets, Inc., worked with the owners early in the process to create layouts and pricing for all the kitchens and many of the baths. “This is the best time to invite a designer in to collaborate,” she says. The kitchens were done in a variety of styles, ranging from Country French to traditional to Scandinavian as well as in a variety of woods, finishes and hardware. Some owners wanted a desk area, bookcases, media cabinets or a fireplace surround. “Each space evolved according to the owner’s lifestyle, aesthetic and wish list for their space,” St. Laurent says.

Dr. Stephen Del Giudice and Vicki Patric are two of the new homeowners, and they’ve known Chorlian for a long time—Del Giudice and Chorlian played Sunday night hockey together for years. “I told him when I was ready to move from Hopkinton to Concord, I had two criteria,” Del Giudice says. “I wanted a place that was walking distance to downtown Concord and built by Jon.”

Del Giudice and Patric’s new home is the most dramatic architecturally, since it was formerly the church altar. Off the condo’s entry are bedrooms, baths and a stairway leading to the second floor. On reaching the top stair, visitors are treated to a spectacular space that made this writer’s jaw drop—the thirty-foot ceiling and enormous windows afford views of downtown Concord, including the gold State House dome a few blocks away. “Our condo offers something we never thought possible,” Patric says. “We have in-town living, expansive and curtain-less windows, and privacy. It’s as though we have a treehouse in the middle of Concord!”

Kim and Marc Normandin own a condo down the hall; as empty-nesters who wanted to back east after two years in St. Paul, Minnesota, they were looking at walkable cities, such as Portsmouth, Boston and Cambridge. “Once we talked to Jon and visited this property, we were sold,” Kim says. “We were drawn to the opportunity
of having a unique home in a great location,” Marc adds.

The floor plan of the Normandins’ condo has the living room, kitchen and dining room on the first floor with bedrooms upstairs. “The best part of living here is waking each morning to the tracery of the original windows and the architectural details in the ceiling,” Kim says. “It’s so beautiful, and we feel blessed to be part of the preservation of this unique property.”

Both the Normandins and Del Giudice and Patric enjoy their new community of fellow condo owners. “We got to know one another over the course of construction,” Patric says. “While we respect one another’s privacy, we’ve also created plenty of opportunities to get together and have some fun.”

“It’s very rewarding to see the community formed with the ten households at Sacred Heart,” Chorlian says. “Everyone seems to get along so well.” 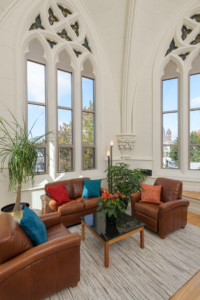 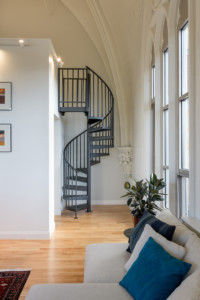 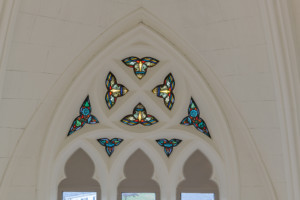 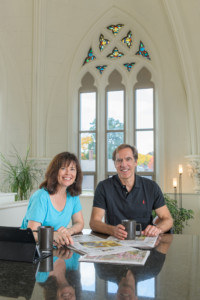 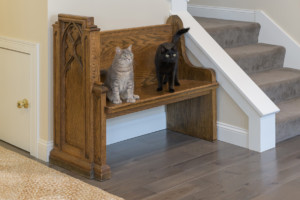 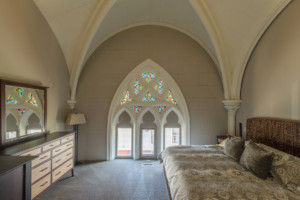