A Dream Home For Retirement

A couple from out of state found the perfect site, with 270-degree views of Lake Sunapee and Mount Sunapee in the distance. 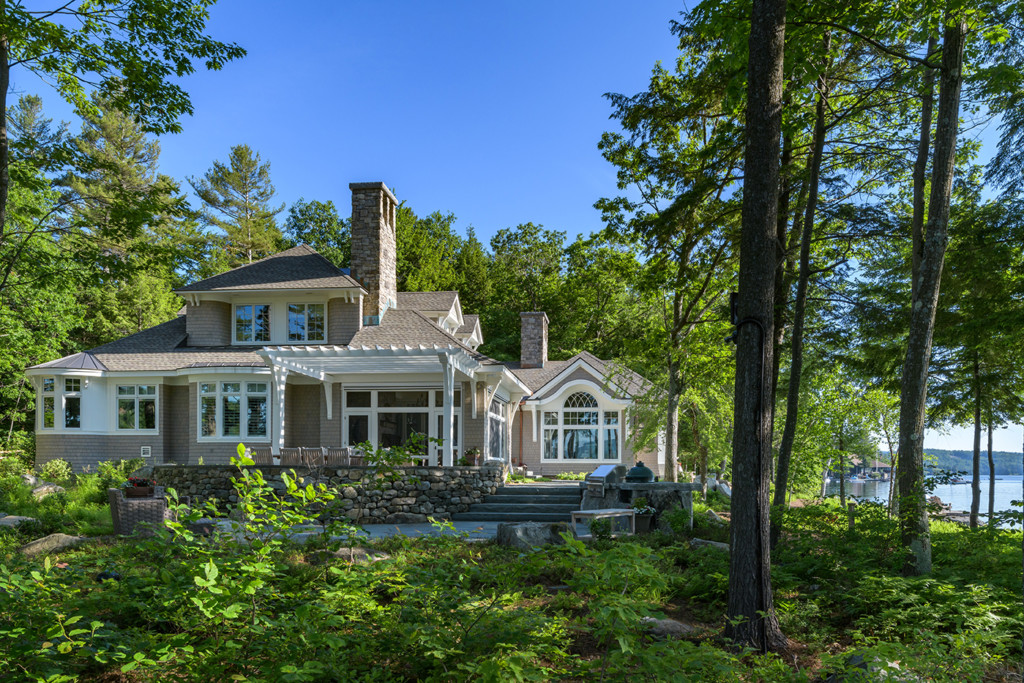 The goal of architect Jeremy Bonin’s design was to make the home “country estate comfortable.”

When this couple began to plan their retirement home a few years back, the first consideration was where it would be. Having traveled the world, the couple knew two things for sure: Their next home had to be on a lake in the mountains, and those mountains had to have snow on them in the winter. From the couple’s then-home base in Cincinnati, Ohio, they surveyed the possibilities—the Northeast among them.

“We loved the Northeast,” the homeowner says. “We had a lot of ties to it.” When their daughter was a student at Dartmouth College, those ties grew stronger as they visited her over the years. The couple often stayed with friends on Lake Sunapee, who encouraged them to look for property there.

And so they did. One day, they found a house on a point of land that had a rare 270-degree view of the lake. To the right in the distance was Mount Sunapee; to the left, through a wooded area, was a quiet cove; straight ahead was an open expanse of lake with a lighthouse. “We looked at each other and said this is one-in-a-million piece of property,” the homeowner says. “We fell in love with it.”

The search for property had ended, but the house itself was not what they wanted. In consultation with their builder, McGray & Nichols of New London, the decision was made to take the building down and replace it with new construction. “There was no question about it,” says Louise Bonfiglio, owner of McGray & Nichols. Even with an expensive renovation, the existing house wouldn’t meet the couple’s needs.

But state regulations for lakes require a new house be built on the footprint of the old one, and it has to be fifty feet from any shoreline. That, Bonfiglio knew, would be challenging: “It’s hard to stay within fifty feet and do that on three sides.”

Bonin Architects & Associates, PLLC of New London and Meredith was enlisted to make it happen. In concert with the builder and homeowners, the design challenge was met with an impressive eleven-thousand-square-foot home. And, not only did it fit the footprint, it checked the list of all the rooms the couple wanted—most of them with views of the lake. 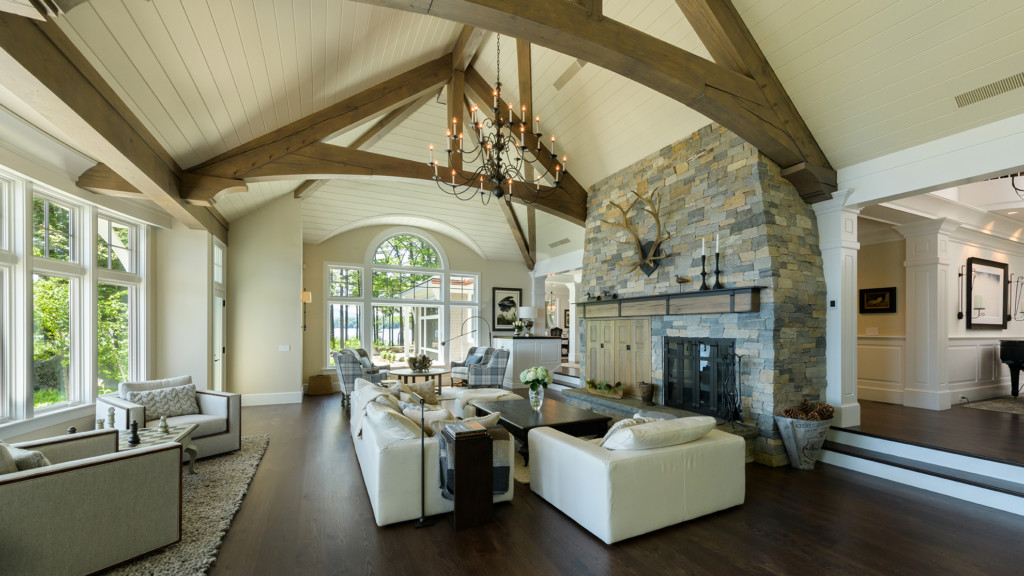 Surrounding the main seating area in the spacious great room are conversation areas that take advantage of the three-sided lake views.

“What we love most,” says the homeowner, “is that (the building team was) able to use every square inch that we were allowed by law.” And, she adds, the results perfectly fit their vision for the home as “country estate comfortable.”

The property certainly looks like a country estate as you approach the house at the end of a long driveway. There is the gabled roof with two, bold, English-inspired stone chimneys; an intimate entryway framed in stone; and graceful arched doorways and windows. Most of all, though, there is the turret that encases a stunning stairway.

“The stair turret is the third, grounding, vertical feature of the home, in addition to the two chimneys,” says principal partner and lead architect Jeremy Bonin. He adds that the turret also provides a distinct division between the house and garage.

The whole house is geothermally heated, cooled, dehumidified and humidified. Bonfiglio says humidification is critical for a house with so much woodworking. “It’s particularly important in the winter, otherwise things would dry out
and move.”

The homeowner, who did her own interior design, says the extensive woodworking provides an aspect that’s important to her and her husband: “We wanted to have a heavy architectural interest so, when you walked in the house, it felt substantial.” But, she adds, the white-painted formality has a counterpoint with the home’s casual furnishings and rustic appointments.

In the great room, formal and casual mix to great effect. The main challenge in this room was its size. “We love big rooms, but you have to master two things,” the homeowner says. “First, you have to have different conversation areas so people don’t feel like they’re shouting across the room, and at the same time, the room has to look like it belongs together.”

A dark-stained floor and white oak timber frame roof structure provide a warm contrast to the light color palette of the room. “The exposed structure leads the eye toward the fireplace and equally to the large, bowed windows to the eastern lake view and patio,” Bonin says. 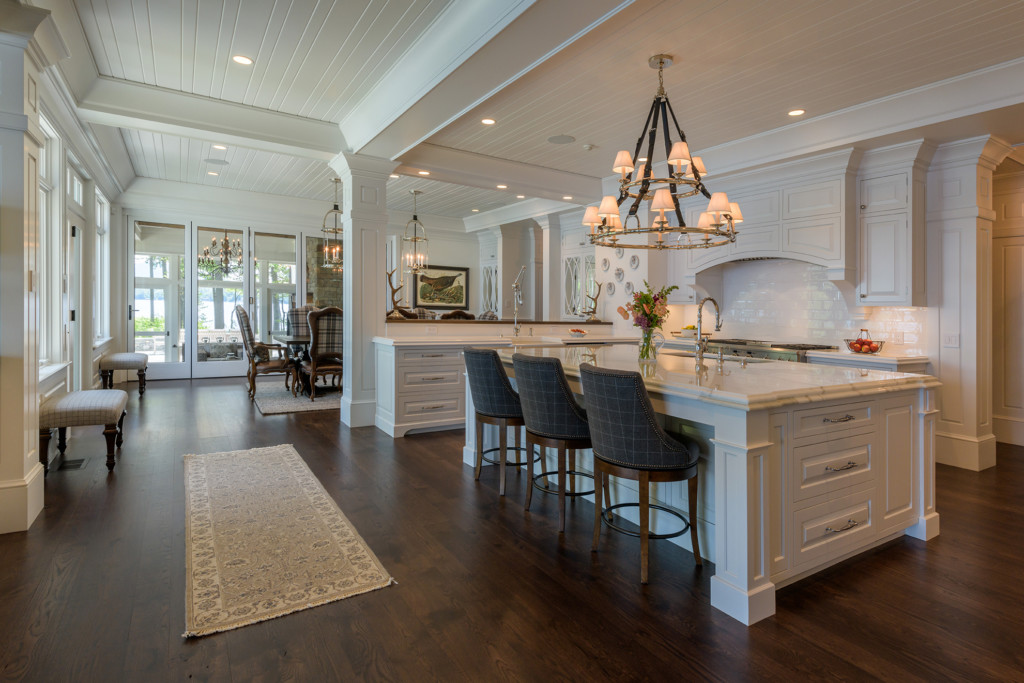 The kitchen’s large center island is topped with white marble, while the perimeter counters are a more durable quartz.

Up two steps from the great room on the east side are the kitchen and dining room—side by side, separated only by a low wall and column, and connected with an expanse of windows. “We love that it’s all open,” the homeowner says. “Even though the kitchen is not right on the water, you have complete views.”

The focal point in the kitchen is the generous center island topped with Calacatta Gold marble that is pure white with streaks of gray and gold. The perimeter countertops, the main preparation areas, are a durable quartz in pure white. The woodworking of the custom-made raised-panel cabinetry hides all the appliances except the stove.

Behind the kitchen is a large pantry, which accommodates all the servingware used for entertaining. It’s also one place in the home where there’s a departure from white cabinetry with a deep gray color.

The abundance of cabinetry continues in the dining room, although cabinets there have mirrored doors with Gothic crossing-circle mullions. The homeowner felt the mirrors provided more warmth and interest than a wall of white cabinets. Plus, she says, the mirrors reflect the lake: “If you’re the guy at the end of the table, you can look in the mirrors and see the lake.”

The dining room is open to the screen porch that sits two steps below to facilitate the view to the water. The two rooms are separated by a folding, glass NanaWall that can be open in warm weather and closed in cold weather.

A large candelabra chandelier on the screen porch combines with other elegant elements, such as the floor-to-ceiling fireplace wall, to make the porch feel more like a living room. “I wanted it in keeping with the other rooms in the house,” the homeowner says. And she wanted it just as comfortable, so she got furniture similar to the indoor furniture, but made of weather-resistant woven rattan with Sunbrella-covered cushions. 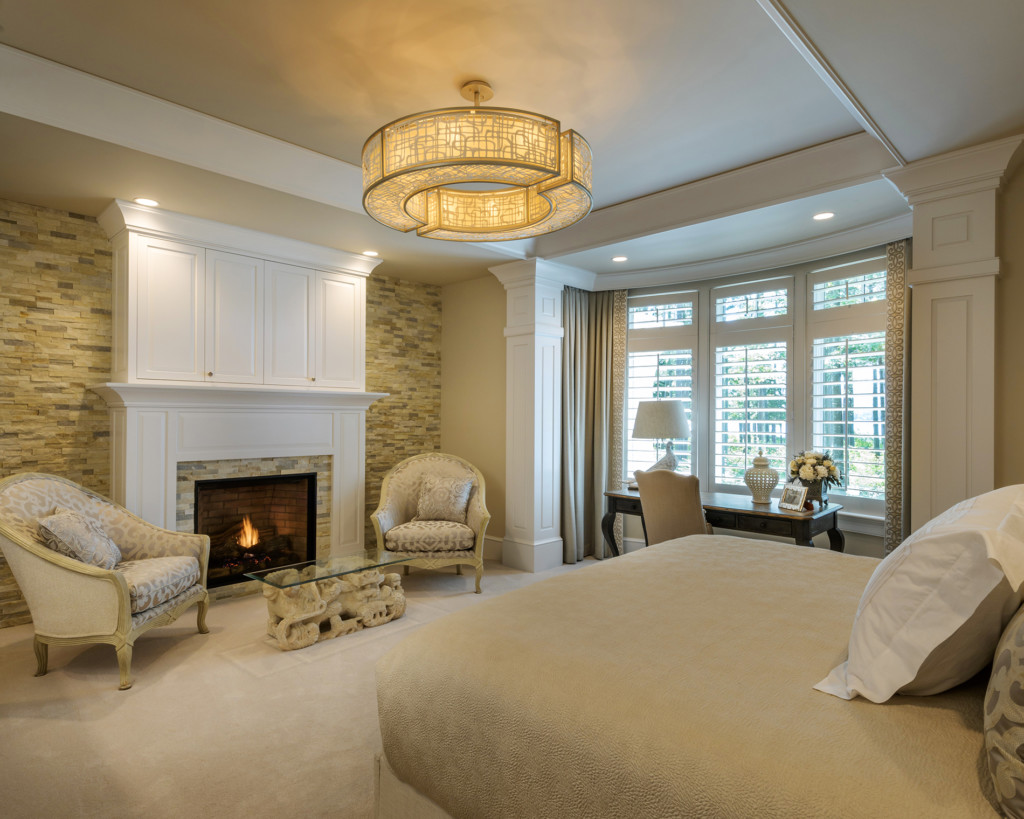 The monochromatic master bedroom has Eastern influences, including ceiling lighting made of latticework rice paper.

In the master bedroom, there are Eastern influences—silk-upholstered chairs at a glass table that sits atop a carved foo dog and ceiling lighting made of latticework rice paper. The pebble-textured, silk Matouk coverlet is paired with a linen headboard and draperies, both with luxurious Scalamandré trim. “I wanted to go for a nice, calming, monochromatic look, but still have some texture and some interest so it wasn’t boring,” the homeowner says. A focal point is the fireplace, with raised-panel cabinetry set against a stone accent wall, one of four in the house.

An unusual feature is a half-wall that opens the bedroom to a hallway, an idea suggested by the architect. The couple resisted at first, but were finally convinced by the fact it allows people to see the mountain views all the way down the hallway—a hallway lit by a line of lanterns—without seeing into the bedroom.

Plantation blinds in the study adjacent to the bedroom are darkly stained, as they are in tropical locations such as Singapore, one of the many places the couple has traveled to. “We wanted the study to hold memories of the exotic places we’ve been,” the homeowner says. “All our Hawaiian art is in there, as well artifacts from Asia that we’ve collected over the years.” There are two desks: one a 1700s Chippendale; the other, a Regency-style desk that has an inlay of a world map on its surface. The study is the one of the few rooms in the house that has a strong color component—here, a blue-and-white print on the chair and coordinating throw pillows.

In the construction process, McGray & Nichols managed to retain many of the trees that were close to the house. It’s something landscape architect Chris Kessler, of Pellettieri Associates, Inc.  in Warner, gives them great credit for. This allowed the heavily wooded property to be relatively untouched, and Pellettieri’s design goal was to do as little as possible to change that. “Most of the property was and is a masterpiece on its own, with mature vegetation creating a beautiful shoreline environment,” Kessler says.

The landscape design begins at the front entry, where there is a granite flagging sourced from Chester, Vermont, that creates the front walkway surfaces and the apron to the garage. “This stone is very dense,” Kessler says, “and can withstand the abuse of vehicular and pedestrian traffic, particularly in the winter.” Large bluestones are used for the path that circles the house and for the patio.

The outdoor grill area was built below the main gathering area of the patio so the grill area wouldn’t become a focal point nor block the view. Kessler says, “We elected to incorporate a large fieldstone veneer around the grills, further reducing their visual impact and playing off the aesthetic of the existing stone on the property.”

The footpaths that lead away from the house, one of them to a fire pit near the shoreline, look as if they’d always been there. Kessler says this woodland effect was achieved, in areas disturbed by construction, by installing a geotextile fabric on the ground and building it up with crushed gravel to make the surface uniform. In places not disturbed by construction, woodchips were utilized as the base and to level the surface, then finished with mulch and pine needles. 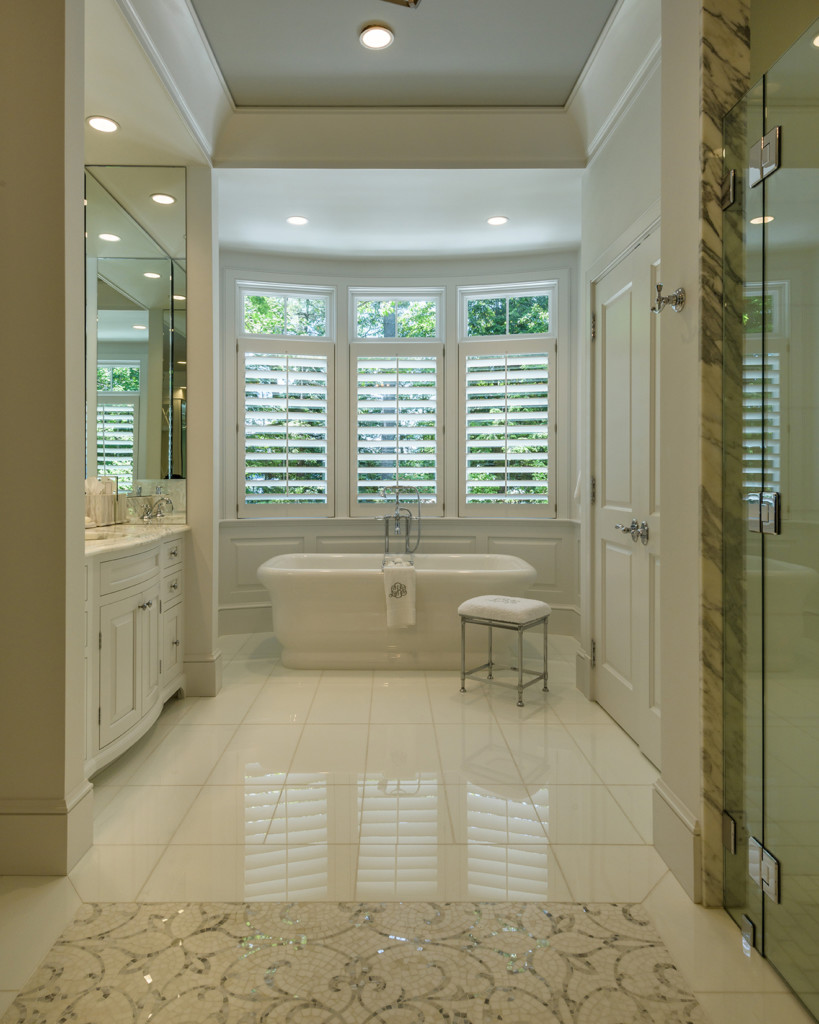 In the master bath, there is a free-
standing tub as well
as a large shower.

The wide stone steps that transition along the paths from the house to the shoreline are made of irregular fieldstone, which Kessler says is aesthetically closer to the existing stone found on-site. The plant material comprises native shrubs, ornamental shrubs, and a mix of native and ornamental perennials. Fern and low-bush blueberry are used as groundcovers.

The homeowners have high praise for the landscape design, being especially happy there isn’t any grass to cut and little other maintenance. “(The landscape team) had a great eye for what fits and what doesn’t. It all connects,” the wife says.

Praise for the end results

The homeowners are equally pleased with the others on the team who designed and built the house. “We loved them. They worked seamlessly together and handled everything without any issues,” the wife says. “It’s difficult enough when you have someone like me who knows what she wants, but doing it remotely, with our living in Cincinnati, plus dealing with a property that is difficult at best, they did all of that.” The same team is now back to build a barn.

Now, after five years of planning and building, the couple can enjoy retirement at their beautiful home, whether with a house full of guests, skiing the nearby slopes or just sitting on their Adirondack chairs looking at the lake. It was, they say, “a labor of love.”