A Bedford couple’s renovated first floor now works perfectly for both everyday life with their two children as well as entertaining larger groups. 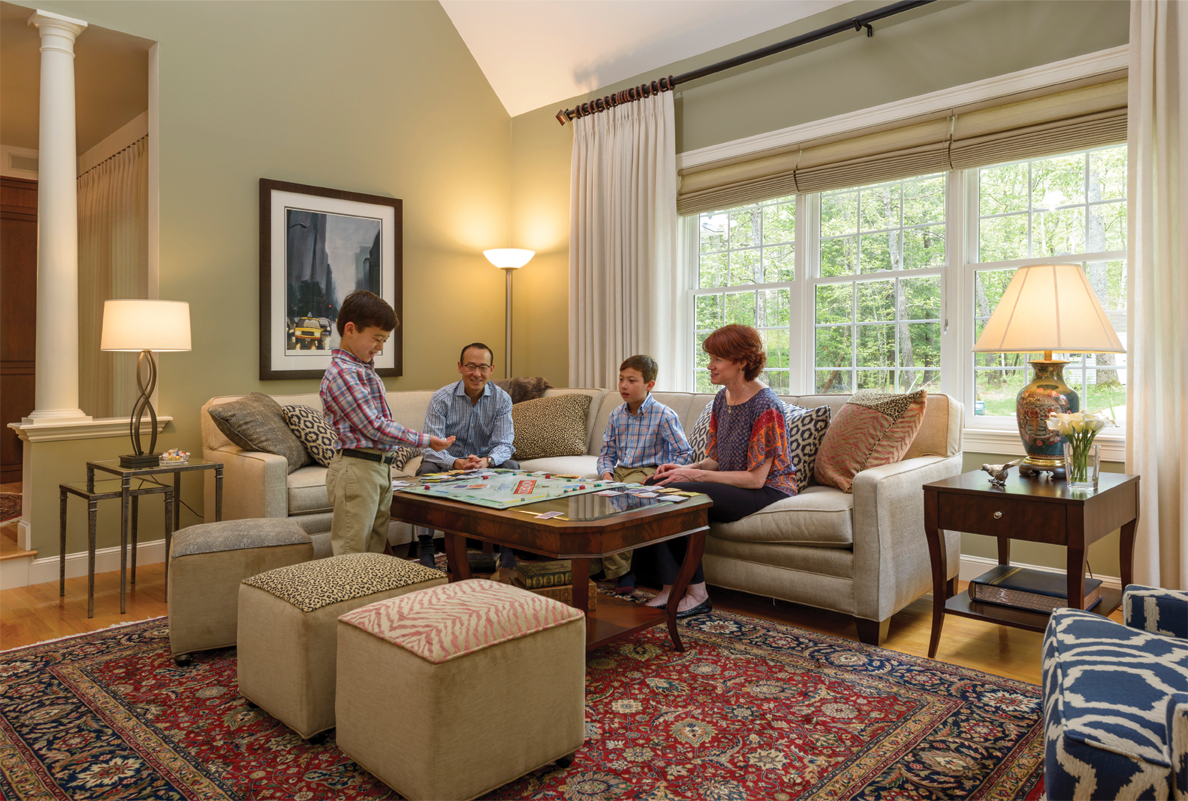 The melding of traditional and contemporary design in the Ahn home can be seen in the  distinct styles of the end tables and lamps  in the family room. Three ottoman —from Winchendon Furniture Company in Amherst—and a higher-than-usual coffee table—from Ethan Allen in Bedford—accommodate the family’s love of playing board games. Pictured from the left are Brendan, age eight; Uri; Bryce, age ten; and Kerri.

For this couple, the most important aspect of a home is to have warm, intimate spaces where the family can gather—both for everyday with their two children, and for special occasions with their extended family. “We love having the family over for the holidays and birthday celebrations,” homeowner Kerri Ahn says.

Although their Bedford home has spacious rooms to accommodate the crowd, the gatherings would inevitably spill into the kitchen, a place Kerri’s husband, Uri Ahn, calls “our main hang-out area.” But the kitchen only had enough seating for three. Plus, it had builder’s-grade oak cabinets, hard-to-keep-clean appliances and a lack of storage. The homeowners decided it was time to create a more functional, updated space for family life and entertaining.

They enlisted the help of Goedecke Flooring and Design Center in Bedford. Cynthia Shreve—then Goedecke’s lead designer and now in business as Cynthia Shreve Interiors in Derry—worked with the homeowners to design a kitchen that would address all their needs, but with an updated contemporary look.

The focal point of the design is a waterfall center island made from stunning Persia blue granite that’s large enough to seat five or six people. To keep the attention on the natural beauty of the island, the perimeter countertops have very little pattern. “It almost looks like a solid color,” Shreve says. “If you give everything the same visual interest, it gets too busy-looking.”

Because the countertops—Caesarstone quartz in buttermilk—almost match the color of adjacent cabinetry, the island stands out even more. But the light-colored cabinetry is only in part of the kitchen; the rest is a contrasting dark American walnut.

The two-tone look provides the visual variety the homeowners wanted: “Although we knew we liked the dark, espresso look of stained walnut in our cabinetry,” Uri says, “we didn’t want the heaviness of its dark color to overwhelm the space.”

Custom-made by Denis Lamy—now of Bristol Construction in Bedford—the cabinets are a full overlay, creating a sleek, contemporary look.

Before the cabinets were designed, Lamy surveyed the homeowners, asking “probably one hundred” questions about the items they wanted to store: how many plates, what type of glassware, bake ware, silverware, how many spices and so on. “It’s a service I offer because it’s just as important to know what will be inside as it is to know how the cabinets will look,” Lamy said.

That survey produced—in addition to the usual storage—lighted mullioned cabinets that display glassware, a “magic corner” cabinet that makes everything easy to reach, a cabinet that lifts a large mixer to countertop height, one that conceals a coffeemaker, and yet another that hides a corkboard, calendar and charger. 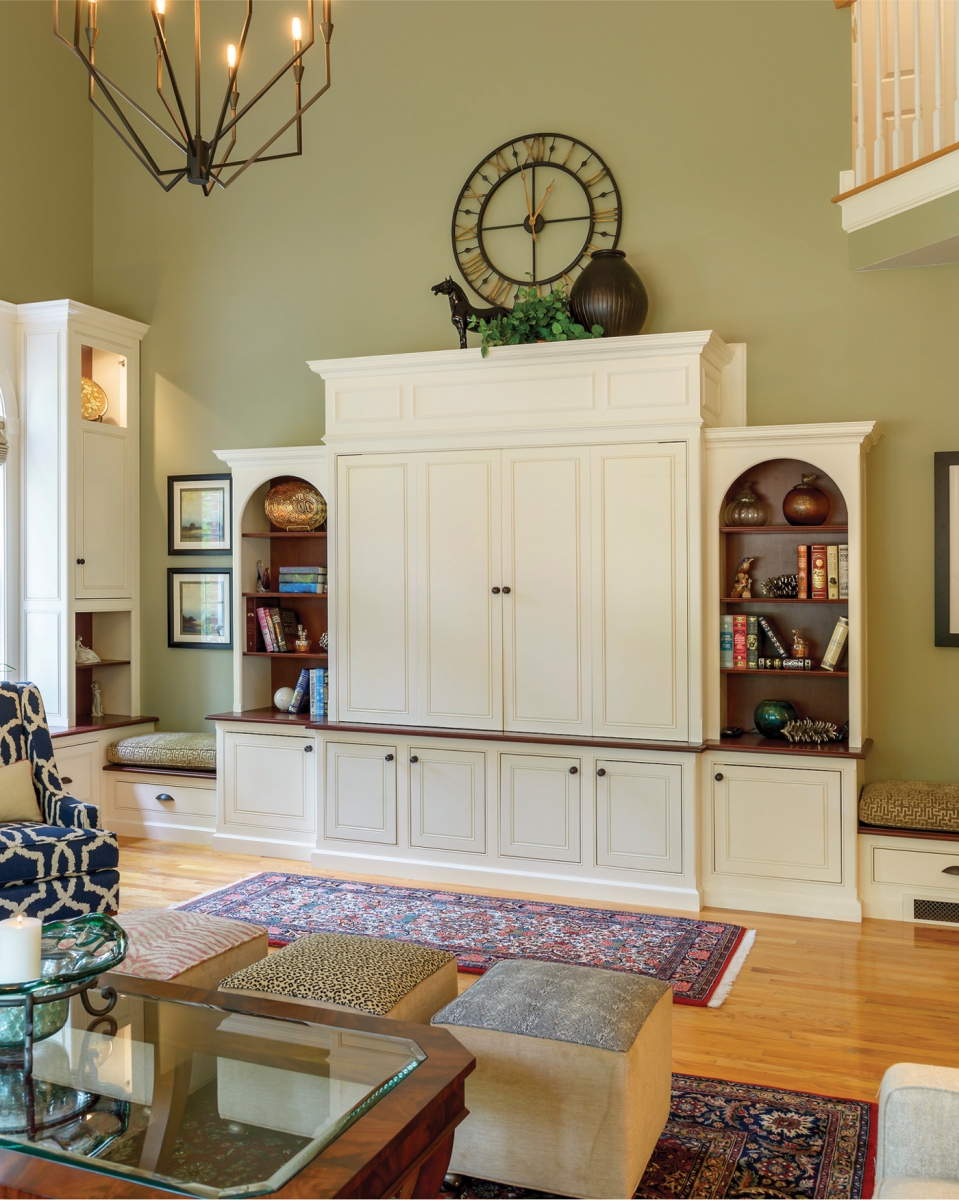 The cabinet that hides the television is framed by lighted open shelving and cushioned bench seats.

But Lamy’s favorite, and everyone else’s, is a cabinet that hides a TV. It’s next to the paneled refrigerator, ready to swing out on a retractable mounted arm for a Patriots game or the Masters Tournament. “With different groups of people hanging out in the kitchen, we didn’t want anybody to miss ‘the big play,’” Uri says. “We wanted the TV to help create a bar feeling, but we didn’t want it visible 99 percent of the time.”

When it’s just the family, they eat meals at a nearby table that was designed by Shreve and custom made by Lamy. “Everything is in a series of circles, starting with the circular Oriental rug,” he says. The bowl-like, cut-glass lighting carries the circular theme upward.

The custom work continues in the adjacent family room. Where once there was just a plain fireplace is now a whole wall of cabinets. And there are more on the adjoining wall with the TV. These cabinets are inset, a more traditional look than the kitchen’s, though still with a contemporary flair.

Shreve had created cardboard models of two possible cabinetry configurations. The homeowners chose the one with a mantel big enough for all their Christmas decorations, lots of both closed and open storage, windows surrounded by trim work, lighted display shelves, and ogee-edged bench seats. The wood of the bench seats, mantel and broad shelves is cherry; the cabinets are painted maple.

“What’s neat about this design,” Lamy says, “is that it has many variations of both height and depth. The multiple planes provide a lot of interest and a unique look.”

That meld of styles continues throughout the family room. The armchairs framing the fireplace have a bold geometric pattern in a blue that was drawn from the classic design of the Oriental rug. A contemporary lamp on metal tray tables is paired with a traditional lamp and table.

“Obviously, the different styles have to relate to one another,” Shreve says, “but the old days of matchy, matchy are gone.”

Also gone—confining “outdoor fabrics” like Sunbrella to the outdoors. The sectional sofa is upholstered in one, although in an updated version. “You can’t even tell,” Shreve says. “It’s not like the old stuff that was kind of like vinyl. They’re beautiful fabrics.”

Perfect for a family that likes to play games on the higher-than-usual, glass-topped coffee table. “We once had nine family members sitting around the table for a game of Uno,” Kerri says. Some of them used the ottomans, which are topped in different animal prints, a theme repeated in the sofa’s throw pillows. 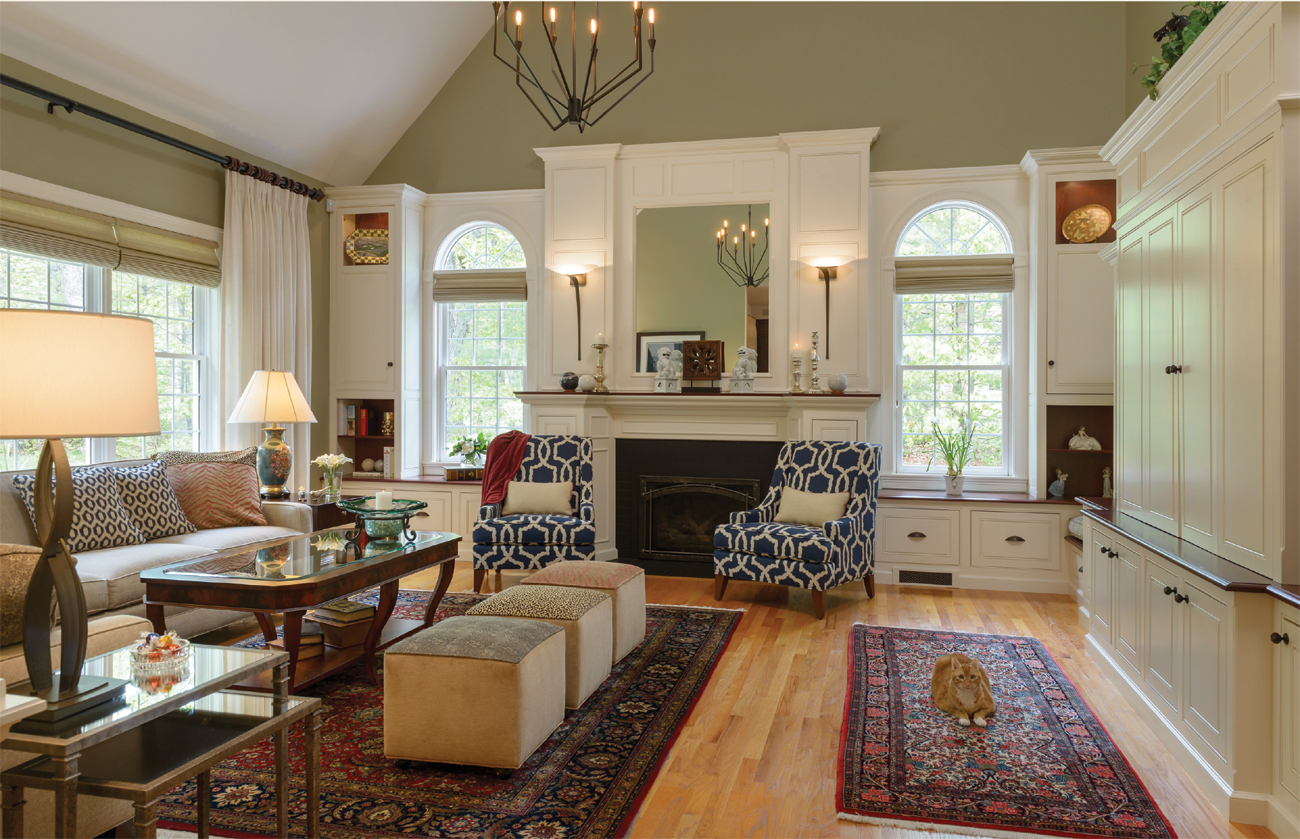 Before the remodel by interior designer Cynthia Shreve, the far wall in the family room had only a plain fireplace. Now custom-made cabinets provide both visual interest and lots of storage. Armchairs in a bold geometric pattern complement the classic Oriental rug. The sconces and chandelier are from The Lighting Showroom
in Bedford.

Putting a variety of patterns together in a room provides visual interest, but Shreve says there’s a trick to doing it right. “You can’t have the patterns all small or all large. Use patterns of different scales,” she says. “That’s what makes it work.”

You see it at work in the living room as well. The medium-scale fabric on the French chairs complements the tightly patterned Oriental. The colors are also complementary. The goal, Shreve says, is to create a “rhythm” throughout the room with both pattern and color.

In the living room, there is again a mix of styles, even in the sofa. It’s contemporary in its form, but the decorative nail heads as well as the tufted back and arms add traditional elements. Behind the sofa is contemporary artwork. A traditional table lamp sits across from a lamp with a contemporary drum shade.

The lighting over the table in the adjacent dining room also has drum shade, but it’s adorned with sparkly crystal accents—part of Shreve’s plan to give the room’s traditional furniture “a bit of glitz.” More glitz is found on the buffet lamps, the candleholders and the rhinestone buttons on the pinch-pleat draperies.

But the showiest bit of glitz is the mirrored chest that sits by the entrance to the dining room. “I wanted to create this little focal point,” Shreve says. She did it with myriad metal tones that shimmer from chest to lamp to mirror. “A lot of people think if you’re using chrome, for instance, everything has to be chrome. That’s not true,” Shreve says.

Of all the rooms, the biggest challenge was the three-foot-by-six-foot powder room, a room Uri previously called “ugly.” It had a pedestal sink, a toilet and an oak cabinet. The walls were painted a deep red color.

It is this room that Herb Goedecke, the co- owner of the company that oversaw the redesign, was most amazed by. He gives great credit to Shreve for “envisioning things that people wouldn’t ordinarily envision.” In particular, the mirrors.

To give the illusion of a larger room, Shreve used three, ceiling-high mirrors; two of them angled out on the side walls. On the opposite wall, above the toilet, she put in a mullioned mirrored cabinet. Between the two, an infinity effect was created to visually expand the space. The multi-level Tek lighting added a luminous quality to the effect.

Also seeming to increase the size of the room is the twelve-inch-by-eighteen-inch porcelain tile flooring. “People think if a room is small, you have to have small tiles,” Shreve says. “But, because you visually cut up the space with all that grout, bigger tiles make the room look larger.”

The powder room’s backsplash tile has an unusual lava stone base, which allows bits of black to be seen amid the tile’s subtle grayed, pastel tones. The design of the Indikoi hand-thrown vessel sink has an elegant crystalline interior with blues and taupes. To Uri, it “looks like a piece of art.”

Accommodating the size of the sink in such a small space was a challenge. Lamy—who had made the walnut-trimmed, black-accented mirrors and cabinet—created a design for the vanity that extended the center portion into the room to make the sink fit. With wall-mounted plumbing, Lamy was able to add a shelf for storage and a stepstool for the children.

This resulted in quite the change for an “ugly” room. Lamy says, “It was transformed from the room the homeowner disliked the most to the one we all love.” Shreve seconds that: “It’s one of the most spectacular tiny rooms I’ve ever done.”

(Left): The kitchen’s overlay cabinets, made by Denis Lamy of Bristol Construction in Bedford, are two-tone, mostly a dark American walnut, with light-colored cabinets surrounding the sink. A buttermilk-colored quartz countertop joins the contrasting colors to create a sleek, contemporary look.

(Right): Family meals are eaten at  a custom table with a circular design that’s repeated in the Oriental rug and the cut-glass lighting above. The table was designed by Cynthia Shreve and made by Denis Lamy. The light over the table as well as the pendants over the kitchen island are from The Lighting Showroom in Bedford.

(Left): A mirrored chest with mixed metal accents creates a showy entrance to the dining room.
(Right): The size of the powder room, just three feet by six feet, presented the biggest design challenge. Three ceiling-high mirrors above the sink and another on the opposite wall provided a room-expanding solution.
Categories: Architecture and Interiors, Renovation, Renovation & Restoration