An award-winning renovation updates an old farmhouse for three generations today as well as those in the future. 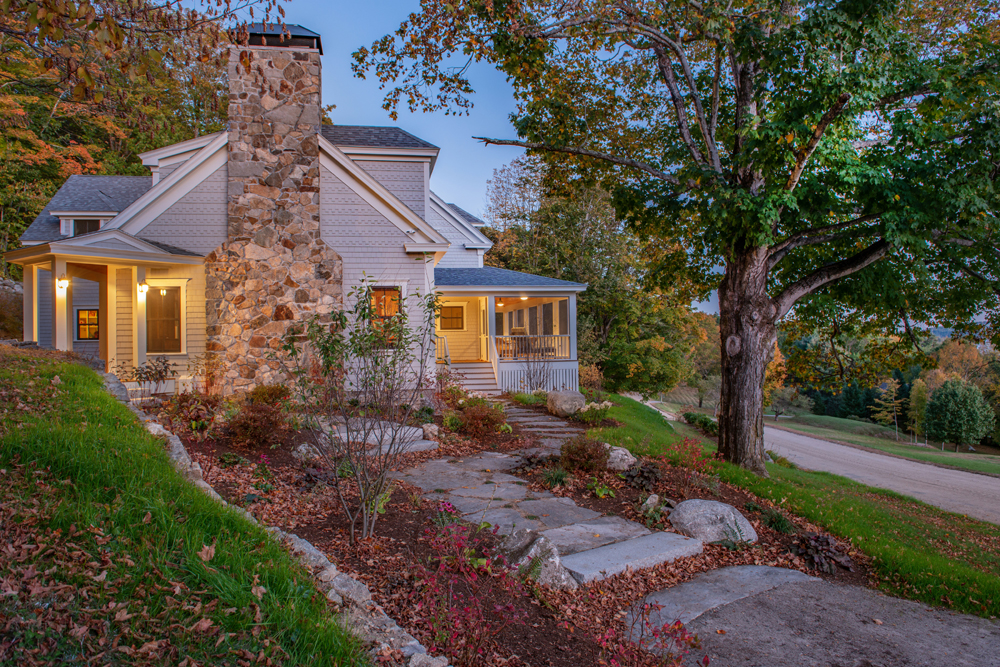 Before this late 1800s house was renovated by Samyn-D’Elia Architects, PA of Ashland, it was a rambling structure with a warren of rooms and few views of the lake. Now, the lake can be seen through much of the house, especially on the expanded screened porch. To accommodate the length of the porch, a decision was made to put the main entrance in the back. Indicating the unusual entry is a landscaped stone path, which leads to a covered porch.

For a whole generation, the children would stand against the wooden wall, sometimes on tiptoe, to have their height measured. The pencil marks (accurate or not) accumulated over the years, and the wall became a treasured part of the family’s lake house.

It wasn’t the only memento that endeared the old house to the family of sixteen—there was also the heating grate. Set in the floor of an upstairs room, the cousins would use it to spy on their parents and grandparents as they sat and talked around the table in the dining room below.

As the adults talked in recent years, conversation turned to the future of the late-1800s house, once part of a working farm, where they had spent many golden summers. Would the rickety rooms hold up for future generations so those children could have the fun they did? The family also talked about how nice it would be, in the present, to have a space for both children and adults that was more open to the stunning lake views and that was more modern, more efficient.

Take the bedrooms, for instance. There was an unwieldy warren of them, packed with people. “I’d have to go through my sister-in-law’s bedroom to get to the bathroom,” says the homeowner’s daughter, one of four siblings, who didn’t want her name used for this story. “It was pretty funny.” 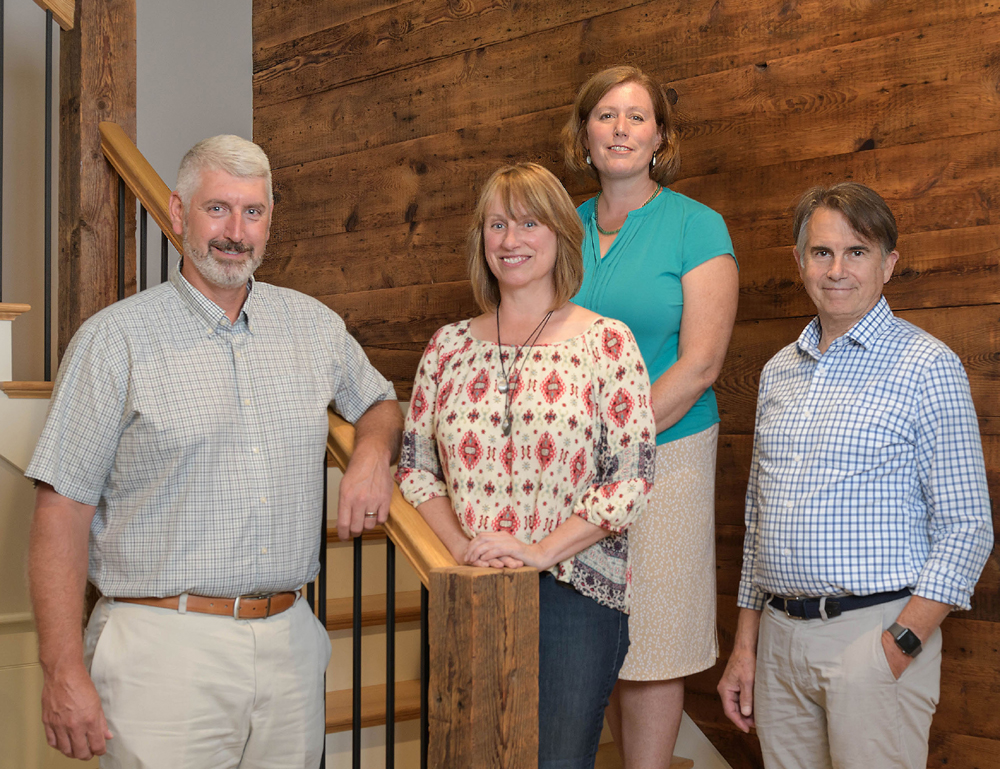 The homeowner says the project team understood what the house meant to the family and what they wanted it to be. From left, builder Jason Keeney of Twin Oaks Construction in Plymouth; designer Stacy Nawoj of Pinnacle Kitchens in New Hampton; and project architect Amelia Martin Brock and principal architect Ward D’Elia, both of Samyn-D’Elia Architects, PA in Ashland.

Not so funny were the steep staircases, three of them, one without a railing. “They were totally not up to code,” she says.

And the kitchen? “There was a separate little room with a sink to do dishes, then there was a back section that had a stove and an island with stools. You had to go from one room to the other. It had character, but it was really awkward.”

The dining room, what she calls “the heart of the house,” was in part of the chopped-up kitchen and had little view of the lake.

Then there was the hodgepodge bathroom plumbing, the screened porch so narrow you had to crawl over people to get from one side to the other, and so on—the list of issues was long.

The space had a beloved quirkiness, but the decision was made to renovate. “It was now or never,” the homeowner’s daughter says.

She and her husband volunteered to take on the project. The rest of the family gave input, but pretty much left the decisions to her.

She enlisted the design help of Samyn-D’Elia Architects, P.A. in Ashland, with Ward D’Elia as the principal architect and Amelia Martin Brock as the project architect. Twin Oaks Construction in Plymouth served as the builder, with owner Jason Keeney as the lead. The project is an award winner, garnering a 2018 New Hampshire Home Design Awards honorable mention for remodeling/ renovation.

From the start, it was a special project for all involved. “It might sound corny, but, when I first visited the house before construction,” Brock says, “you could just feel the love in the place. That’s why the homeowners were willing to go through a lot of work to keep it that way, so everyone would keep coming back. The family really treasures this house.”

The team’s first decision, the biggest, was whether to renovate the existing building or to start from scratch. After looking at what Brock calls “a rambling, ad-hoc structure,” mostly built directly on the ground, the team decided the choice had to be a tear-down—with the exceptions of a 1980s addition of a living room with a stone fireplace, and a master bedroom and bath above it, about one-third of the existing house.

The aim was to create a structure that was farmhouse on the outside and contemporary on the inside. “The idea was that, whatever changes were made, someone who had been looking at the house for years and years wouldn’t think that it had changed,” D’Elia says. “We wanted it to have the character of the original house.”

That meant Keeney had to carefully match the details of the original, including the distinctive striping pattern and toothed shingle on the exterior walls as well as the profiles of the eaves and rakes. And, again retaining the old style, the screened porch had to be lengthened and widened to accommodate more people and a table. 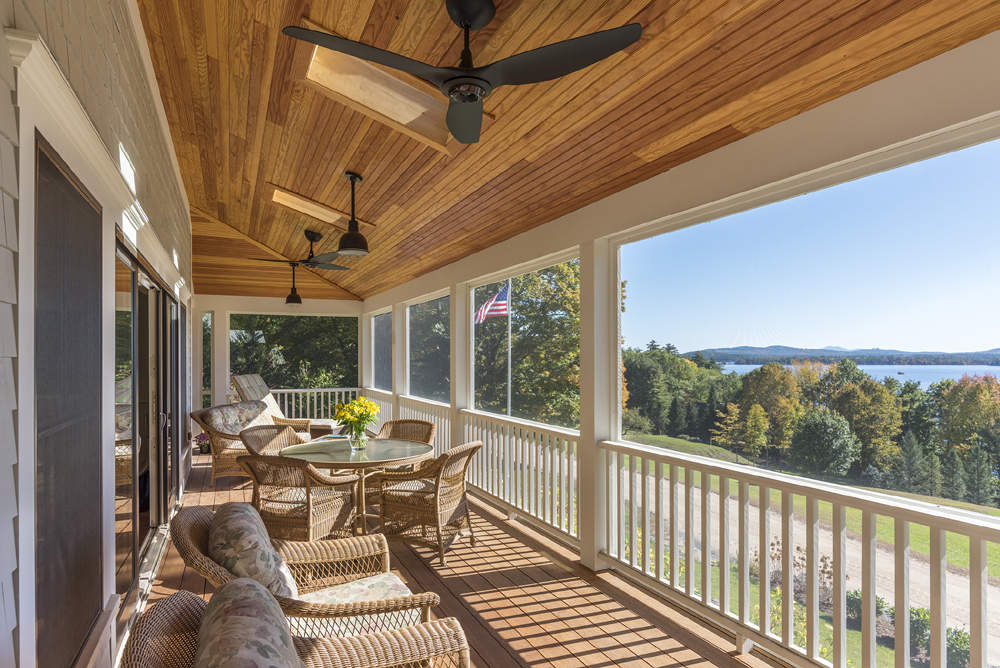 The spacious screened porch has room for a table and more seating for the family.

Both D’Elia and Keeney say the framing of the new construction was challenging because it was constrained by a leach field to the east and a close-by stone retaining wall in the back. Plus, to the west, a wing for a new master suite with a view of the lake had to be added.

After what they call a lot of “head-scratching,” the plan was made. There is still an entry in the front onto the screened porch, but the main entry is in the back, aided by the addition of a covered porch and defined by the landscaping that leads to it.

Inside, a mudroom now accommodates the many pairs of shoes—a change from the former pile by the front door, left by the family and friends because there was no other place. (One family photo shows thirty pairs of shoes.) Also in the entry is a striking staircase. The three out-of-code staircases were replaced by one U-shaped stair with a feature wall of barn board and wood railings with wrought-iron balusters. “Above the stair,” Brock says, “is a dormer with big windows and a skylight that allow the light to stream in through the back of the house.”

At the top of the stair is a large play area for the children, three bedrooms (including a master suite), and two bunkrooms. While the floors in most of the house are cherry, in the bunkrooms they’re painted—one dark green, one dark blue. “That gives them a more traditional farmhouse look,” Brock says.

Changes for the kitchen

Another nod to the farmhouse look is in the kitchen. Although the room is otherwise contemporary, the ceiling is composed of classic bead board, placed in an eye-catching symmetrical pattern. To create it, a lot of elements had to be woven together—the lights, the windows, the shiplap cooktop hood and the beams. “It was a little tricky,” D’Elia says, “but it was the kind of fun puzzle I like to do.”

The kitchen designer—Stacy Nawoj, of Pinnacle Kitchens in New Hampton—says the family’s must-have for the kitchen was a large island with a cooktop, large enough for their summer ritual of all gathering for pancakes. “They wanted it to be reminiscent of the table they had in the old house, and to feel like warm wood rather than cold stone,” she says.

Although the family didn’t mind a few dings and dents, the island top was made in one large piece from tough, durable iroko wood. A manufacturer’s finish provides yet more durability and water resistance.

The island’s cabinetry is a bold blue. The other cabinets are white; the countertops are a silver pearl leathered granite with a matte finish.

“The family didn’t want anything shiny or too modern-looking,” Nawoj says. “Casual was the keyword.” With open shelving to either side of the farmhouse sink, an adjacent pantry provides additional storage. There’s also a second refrigerator and sink there.

By the kitchen is a library with bookshelves that are custom-designed to fit an old Coke machine that had long-ago found its way to the house from a college dorm. The backer boards for the bookshelves had been reclaimed from the old kitchen. “It’s a beautiful, warm, orangey-brown color that really pops with the white shelving,” Brock says.

The open-concept kitchen/dining room area/library looks out on the view through twelve-foot sliding doors to the screened porch. It’s a view that the family can now enjoy year-round, thanks to a new high-efficiency boiler and the thermal break provided with extensive insulation by Twin Oaks Construction.

So even on winter days, generations of children’s heights can be measured and the cousins can spy on the adults downstairs through the old floor grate. (Both the grate and the wall with the heights marked on it were removed from the old house and placed in the new.)

In gathering there now, three generations together, there is a beautiful, solid, safe place for all—a place that not only evokes a precious past but is ready for coming generations to make their own wonderful memories.

“There’s still a pinch-me feeling when we walk in the door,” the homeowner’s daughter says. “The builder and the architect really understood what this house meant to my family and what we wanted it to be. It’s what we imagined and more.”

Left: Next to the kitchen is a library with custom shelving that houses an old Coke machine. Beyond the library is a living room with a stone fireplace; the living room, along with the bedroom above it, was the only part of the original house that was kept. A pantry adjacent to the kitchen provides enough storage space to allow open shelving around the farmhouse sink.

Right: Skylights and dormer windows provide plenty of light. An old barber chair next to the window is another antique the family enjoys.

Left: The dormered rooms upstairs reflect the exterior architecture, which was carefully matched with that of the original house.

Right: Hodgepodge plumbing in the original bathrooms was one of the reasons for deciding on a teardown for most of the old house. Now there are up-to-date bathrooms that offer a pleasing blend of contemporary and farmhouse styles.

Three out-of-code staircases were replaced with just one—U-shaped with a feature wall of barn board. The railings are wood with wrought-iron balusters.
Left: At the top of the stair is an open area that’s perfect for children to play or a place to read or just enjoy the view.

Right: The house, which is set back from the lake amid rolling hills, is now equipped for all four seasons. Before the installation of a new heating system and insulation, visits were mostly confined to the summer months.