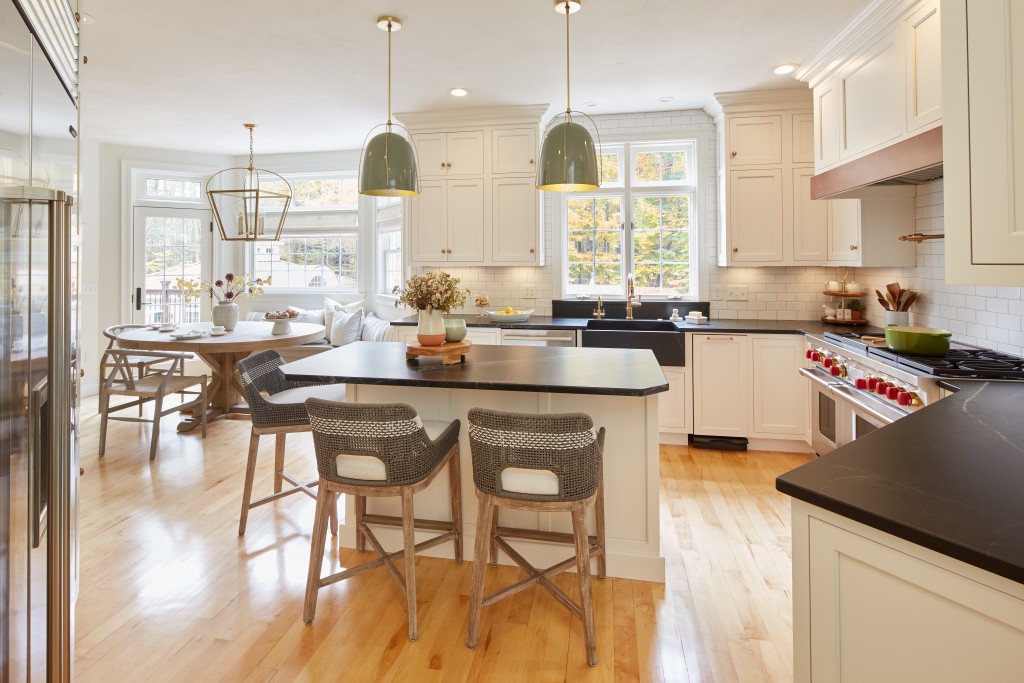 The kitchen was redesigned to support day-to-day life and family gatherings in a stylish, comfortable and simple setting.

When her children were small, every time Johnna Dourdoufis wanted to open the double oven doors, she panicked, and had to first yell out, “Don’t come into the kitchen!”

“I had in-wall double ovens that were in the doorway between the mudroom and the kitchen,” she explains. “I was afraid one of my kids would run into a hot oven.” Family holidays with lots of little ones underfoot made her particularly nervous. “My kitchen was functionally bad. Even worse, it was dangerous.” 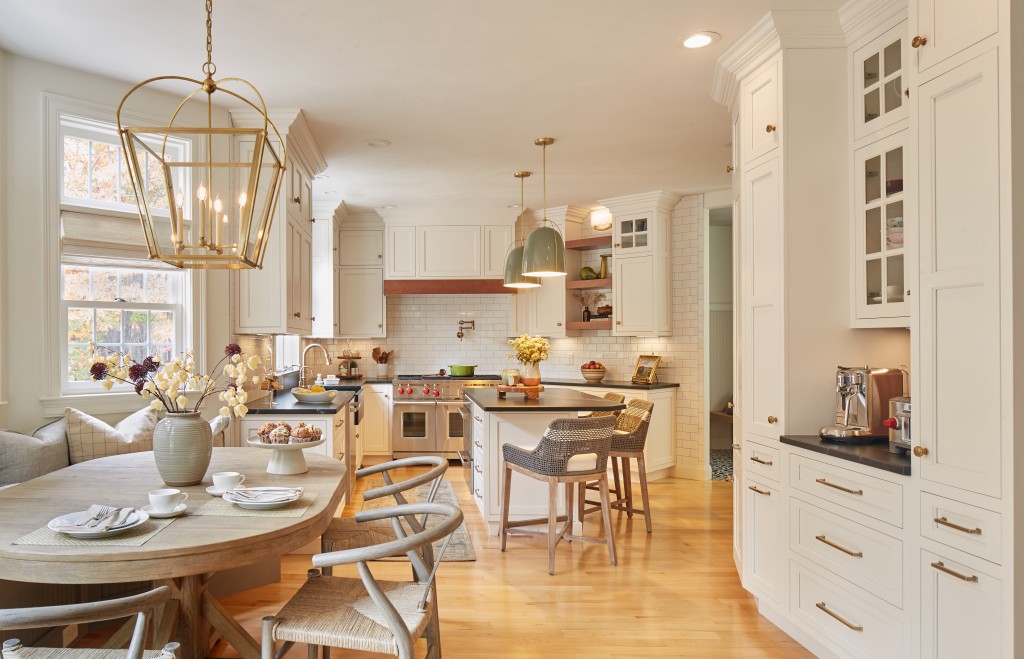 Moving the refrigerator and adding white cabinetry opens up the space for better workflow and a more inviting kitchen.

Johnna and her husband, Peter, built their 4,100-square-foot Stratham home in 2002. In the fall of 2019, they decided
to finally renovate their kitchen, but the COVID pandemic and ensuing supply chain shortages kept the project from beginning in earnest until June 2020.

“It was way, way beyond time for an upgrade,” says Johnna. “Most of the appliances and most of the cabinets were broken. I was using my son’s microwave from college because mine had died.”

The existing space presented a multitude of problems. In addition to the hazardous oven doors, the refrigerator was angled in such a way that, when its door was opened, it bumped into the kitchen island. All the appliances and the sink were located on the same side of the kitchen, creating a logjam, and there was room for only one person at a time at the cooktop. Even the hardware was, in the homeowners’ words, “ugly.”

While they understood that a major renovation was called for, the Dourdoufises were put off at first by what certain professional remodelers were telling them. “A lot of them wanted to do a massive renovation that included changing walls, changing stairs and more, and that would have put us way over budget,” says Johnna. “Finally, we found Cathy.”

Cathy Stathopoulos of B&G Cabinet in Newburyport, Mass., is a certified kitchen and interior designer.

“It was a challenge,” says Stathopoulos, who was most concerned about the room’s difficult angles and lopsided layout of appliances. “I knew when I walked in that the only way I was going to make this work in the existing space without having to do major surgery would be to get the refrigerator out of that location and move it to the other wall.” 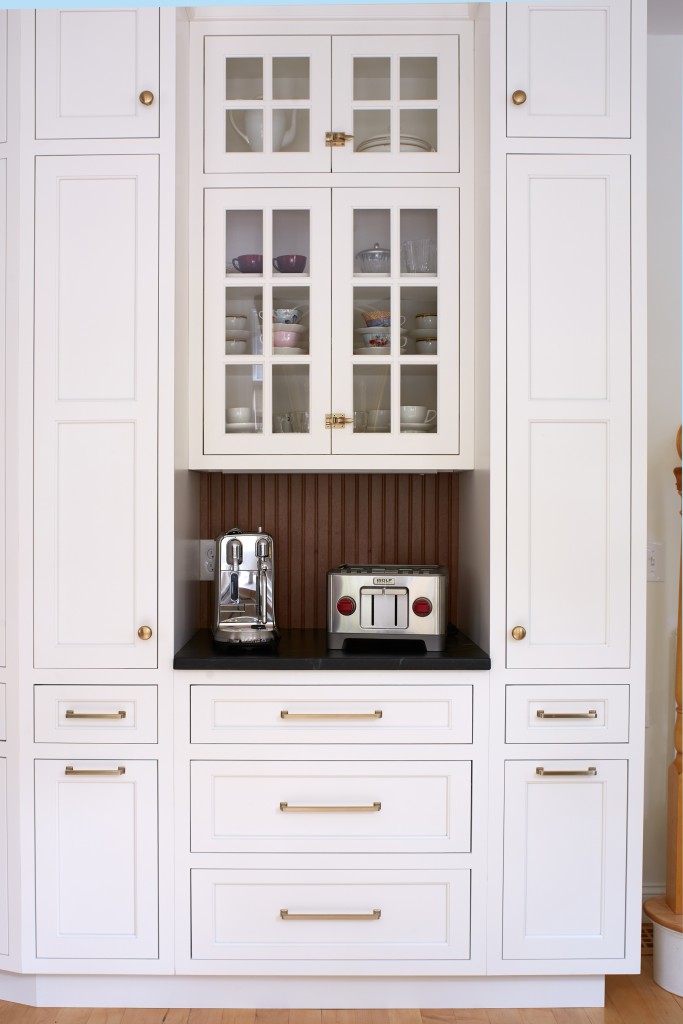 This nook creates a dedicated space for a coffee/breakfast center.

But what seemed a relatively easy solution became less so when she realized that a stairway behind that wall ate up some of the depth she needed for the fridge. There was also a gas line going up to the master bedroom fireplace. The conundrum was how to find room for the refrigerator without moving the stairs and the gas line.

Then Stathopoulos had an aha moment. Simply moving the doorway over by a foot gave her the 12 inches she needed for the refrigerator. “That was the key to this project,” says the designer. “That one simple thing changed the whole landscape.”

Shawn Billings, owner of Credible Construction in Dover, was the builder on the project, which required that the kitchen be taken down to the studs. In addition to moving the gas line and taking care of the venting for all the appliances, he and his team moved a wall, got rid of the arched doorways and put in new tiles. “We did all the drywall and moved all the electrical and the plumbing,” he says.

Johnna Dourdoufis herself did 99 percent of the interior design, and her exquisite taste is evident in the simple elegance of the finished product.

“I knew I wanted to mix traditional elements with modern ones,” she says. For example, the standard subway tile backsplash and the traditional Cabico Shaker-style cabinets mingle with mid-century modern “wishbone” dining chairs from allmodern.com, also the source of the chairs around the island. “They’re a modern chair that has some traditional elements, too. I mixed and matched,” she says.

Johnna opted for Sub-Zero and Wolf appliances, and when it came to selecting the countertops, as a native New Englander, she felt there was only one choice: soapstone. The color is stormy black, and she found it at Jewett Farms + Co in Dover. “The piece for the island has a big striation through it,” she describes, adding that it resembles lightning striking. “It’s absolutely beautiful. It’s the showstopper.” As for the team at Jewett Farms + Co, she says “they were amazing, and the fabrication that was done is impeccable.”

The size and shape of the newly designed island creates a better workflow than before. To deal with the kitchen’s funky angles where two walls are wrapped around the main staircase, Stathopoulos placed cabinets there and brought them all up to the ceiling. 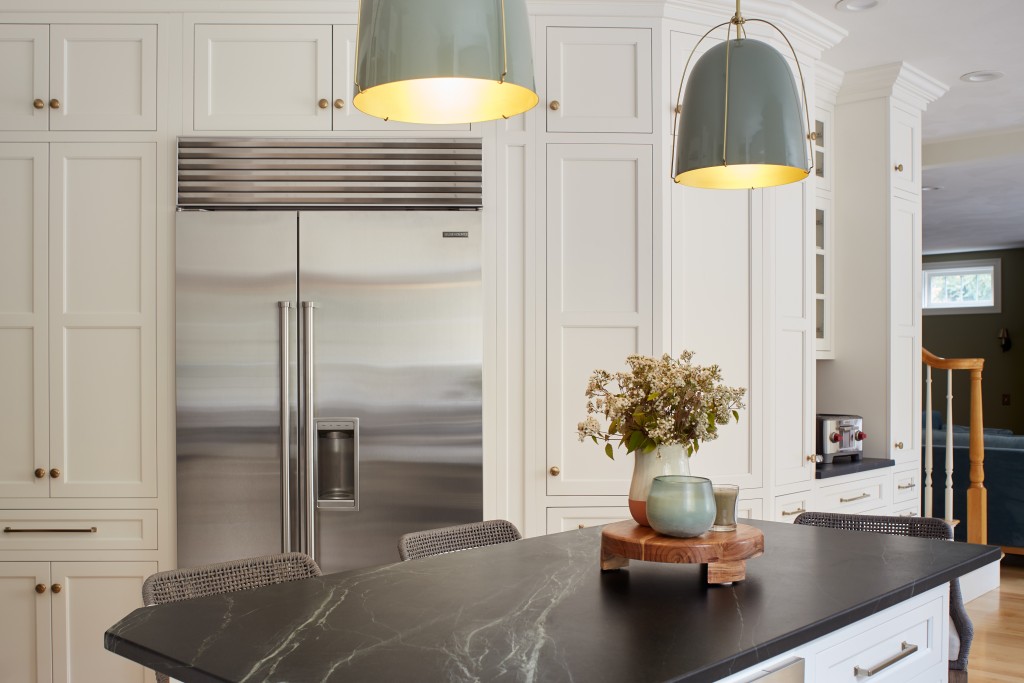 The refrigerator is tucked into the bank of tall pantry cabinets to free up counter space.

“Cathy didn’t try to fight the angles. She said we’re going to work with them and we’re going to incorporate them into the design,” shares Johnna. “And now the sections that she wrapped around the back of the staircase are beautiful.”

Given the especially detailed and challenging design, Stathopoulos knew that installer Mark Lyons of B&G Cabinet, who is renowned for the quality of his work, was the only man for the job.

“I have to give kudos to our installer. Mark is a cabinetmaker by trade, so he’s got those skills,” she says. “He’s a fussy person, and we needed that on this job. I insisted we have Mark do the install, and Johnna was thrilled with him.”

All the parties are overjoyed.

Says Stathopoulos, “I’ve been designing since 1986 and can’t count how many projects I’ve done, but this one
was definitely a ten. It was such a challenge, with so many details and complications that needed to be fixed and completed. Having it end up like it did was transformational.”

Johnna Dourdoufis says it’s her dream kitchen. “It’s not only a place of function, it’s an inviting space. Now it feels like home.”