A fresh take on tradition

A renovated kitchen and cultivated gardens create an elegant home for summer entertaining. 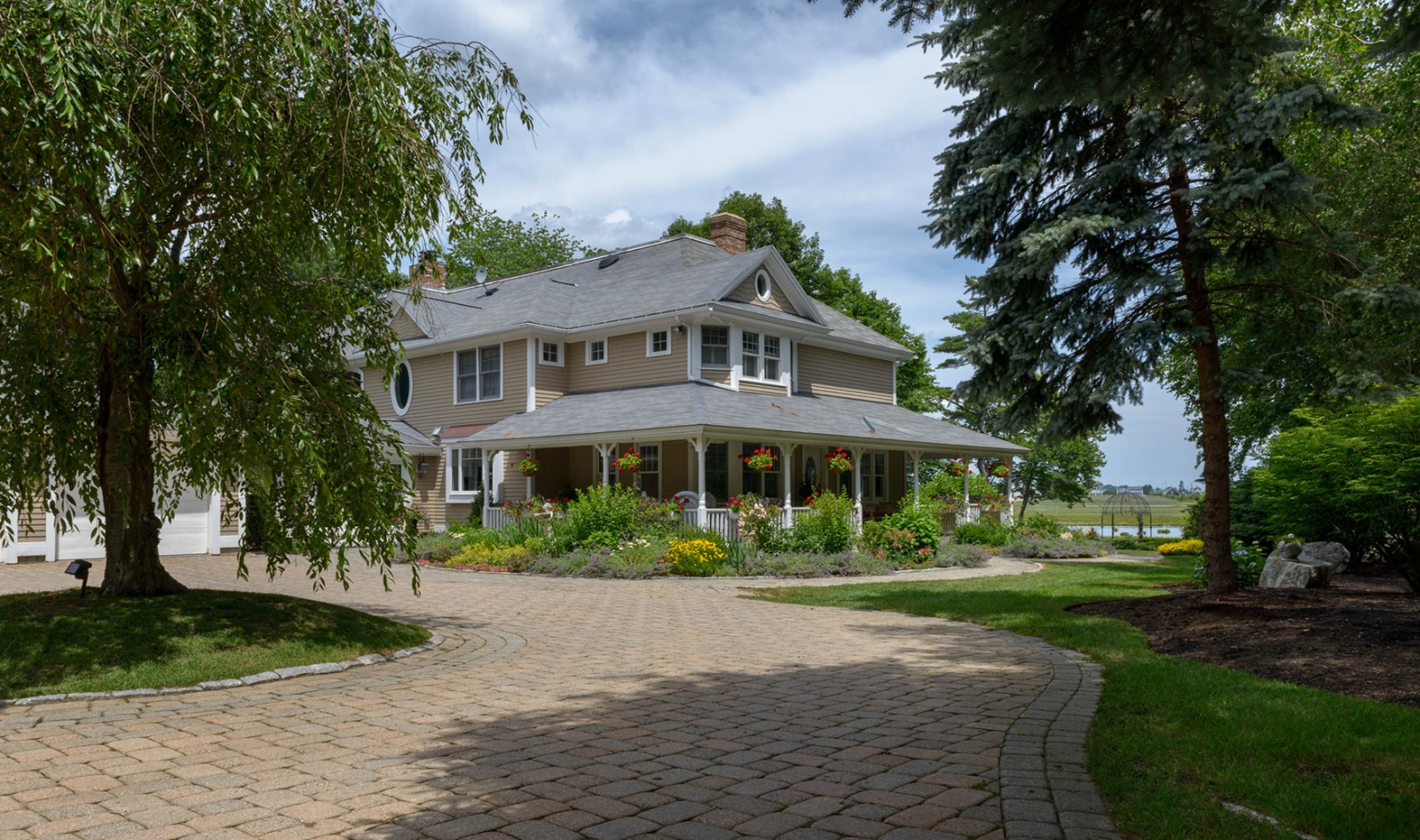 A welcoming courtyard affords a long view of the marsh. Paths clearly indicate entryways; head into the house or find the party on the front lawn.

To reach this lovely coastal home, follow a paved lane lined with shade trees to enter a courtyard filled with flowers and brilliant ocean light. It’s a sheltered, welcoming entry. In an enclosed breezeway, two long views of the marsh draw the eye past a sitting area and formal living room. It would be easy to simply walk ahead into the conservatory, drink in the view, step into the gardens and walk toward the gazebo.

Twenty years ago when the homeowner moved in, the house had no landscaping to speak of, just a small stone wall. She began by creating beds to encircle the house, using lots of luxurious blue Nikko hydrangeas. A curved, stone sitting wall makes leisurely summer conversations easy. Then came a courtyard and a conservatory, which fit with the existing side porch and screened-in porch for cigar smokers. Add a small English-style garden, bocce court, outdoor grills and a beach buggy loaded up with surfboards.

The result is that there are many garden rooms. Some are formal and public, while others are casual or private. Soft hedges throughout give the garden rooms definition and a green backdrop for flowerbeds. Landscaper Jeremy Bonner of Bonner Landscaping in Epping has trimmed the hedges here for decades and cares for the lawn as well. “Trimming hedges is an art,” he says simply. “You’ve got to have a good eye and a steady hand.” 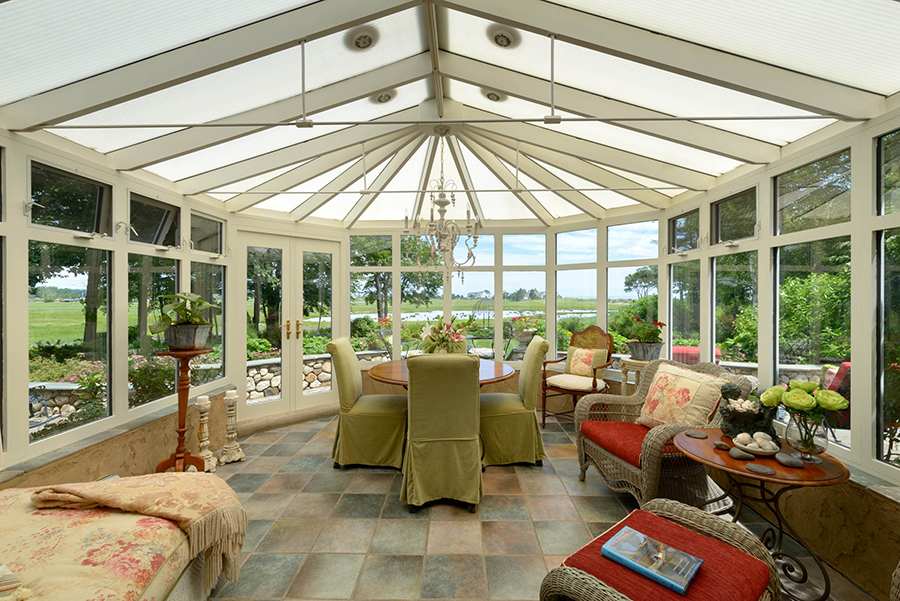 A study in perspective: to view the gardens, wild marsh and ocean from the protected vantage point of the conservatory is spectacular and also practical for accommodating all guests in any weather.

“To complement the bright reds and lime greens of the porch furniture, I went with a vivid palette,” Zukas says.

The hanging baskets were filled with Calliope dark red geraniums and were used in the window boxes as well. Scaevola, setcreascea, rekohu sunrise Carex grass and superbells apricot punch added brilliant contrast. The urns by the gazebo were done in a more tropical style with cannas, euphorbia, Pennisetum ‘Vertigo’, setcrescea and, again, the Calliope dark red geraniums. The final result of these thoughtful combinations is an elegant, pulled together look.

The critical focal point for this garden came about by accident. A big white pine fell over and opened up the view. Soon after, the homeowner spied a metal gazebo at an antique store. Placing the gazebo where the pine had been, this spot became the perfect place for weddings and celebrations. To integrate the gazebo into the garden, the homeowner planted a low hedge and autumn clematis, a vigorous, easy-to-grow vine. Adding fairy roses and Nepeta created a flowering circle that blooms all summer long.

Creating the heart of the home

A few steps to the right of the gazebo is the kitchen, the heart of this home. The homeowner, a busy professional and mother, loves to cook and entertain. She has a wonderful eye for design, color and details. Critically, she knows how to enlist expertise, communicate her vision and inspire great craftsmanship.

“Before the renovation, I was always shooing people out of the kitchen,” she says. “I wanted a space where my family and guests could hang out comfortably. And I wanted to do what I like to do—cook and still be a part of the action.” 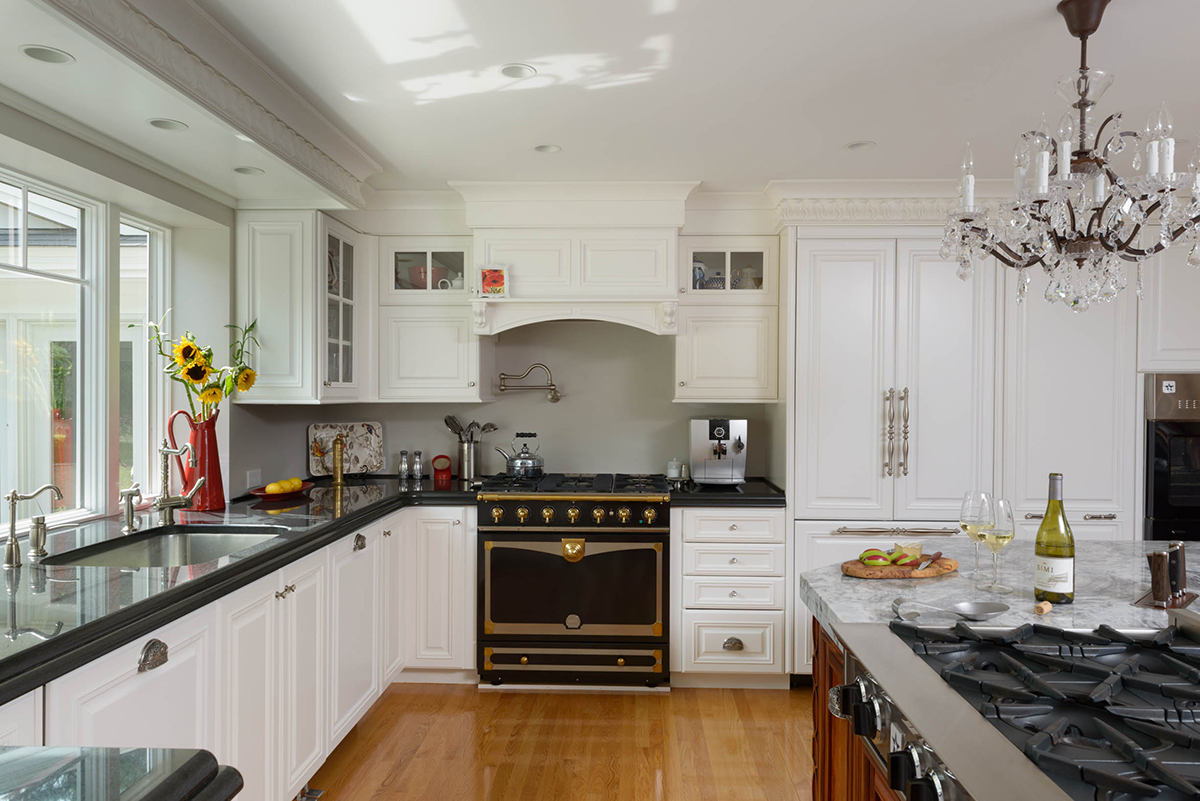 This kitchen’s seamless look includes two of everything­—from sinks and dishwashers, to stovetops, refrigeration units and ovens. Each drawer is meticulously organized and strategically placed, making prep work a snap.

Today, that’s just what happens. Her kids tackle their homework at the kitchen island. And her husband often joins her in the kitchen and works on his laptop. When she entertains, whether it’s for the annual potluck get together with neighbors or to host family celebrations, the kitchen’s functionality expands accordingly. With two ovens, two stovetops, two sinks, two dishwashers and ample refrigerator space, caterers and guests slip easily into the logically organized space.

“Sometimes it’s a three-ring circus in here,” the homeowner says. “But it all flows.”

To begin the renovation, the homeowner identified a few points. First, she wanted to face everyone while she cooked. Second, functionality was key. Consequently, she chose her appliances first.

The French CornuFe stove is the kitchen’s centerpiece. It cooks beautifully and has a very low simmer burner. As most cooks well know, achieving a truly low flame can be difficult. So when her husband decides to cook a big batch of his grandmother’s Italian sauce, this burner provides just the right amount of heat.

Working with the space

The challenge was how to make all of this fit in a kitchen while retaining a tight working triangle. The homeowner works closely with local companies, and she found two expert and creative partners in builder Ron Houghton of Houghton  Builders, Ltd. in North Hampton and cabinet-maker Jamie Gowing of Jamie Gowing Cabinetry in Hampton.

Houghton has been building fine homes on the Seacoast for more than forty years. As he talks about working on this kitchen, he clearly enjoyed the challenge of creating such an elegant yet highly efficient space. “It’s a midsize kitchen, which keeps it manageable,” he says. “Plus, to maximize the space even more, the homeowner incorporated many commercial applications, such as foot pedals to control the hot and cold water for the small sink in the island.”

The kitchen island is quite large, Houghton says, but it’s cut in a double French curve that creates a comfortable conversational space. The curve and wavy striations of the marble countertop give a dramatic sense of movement to the whole room. “She really chose a fabulous stone,” Houghton says. “It’s a type of marble that’s very hard and beautiful.” 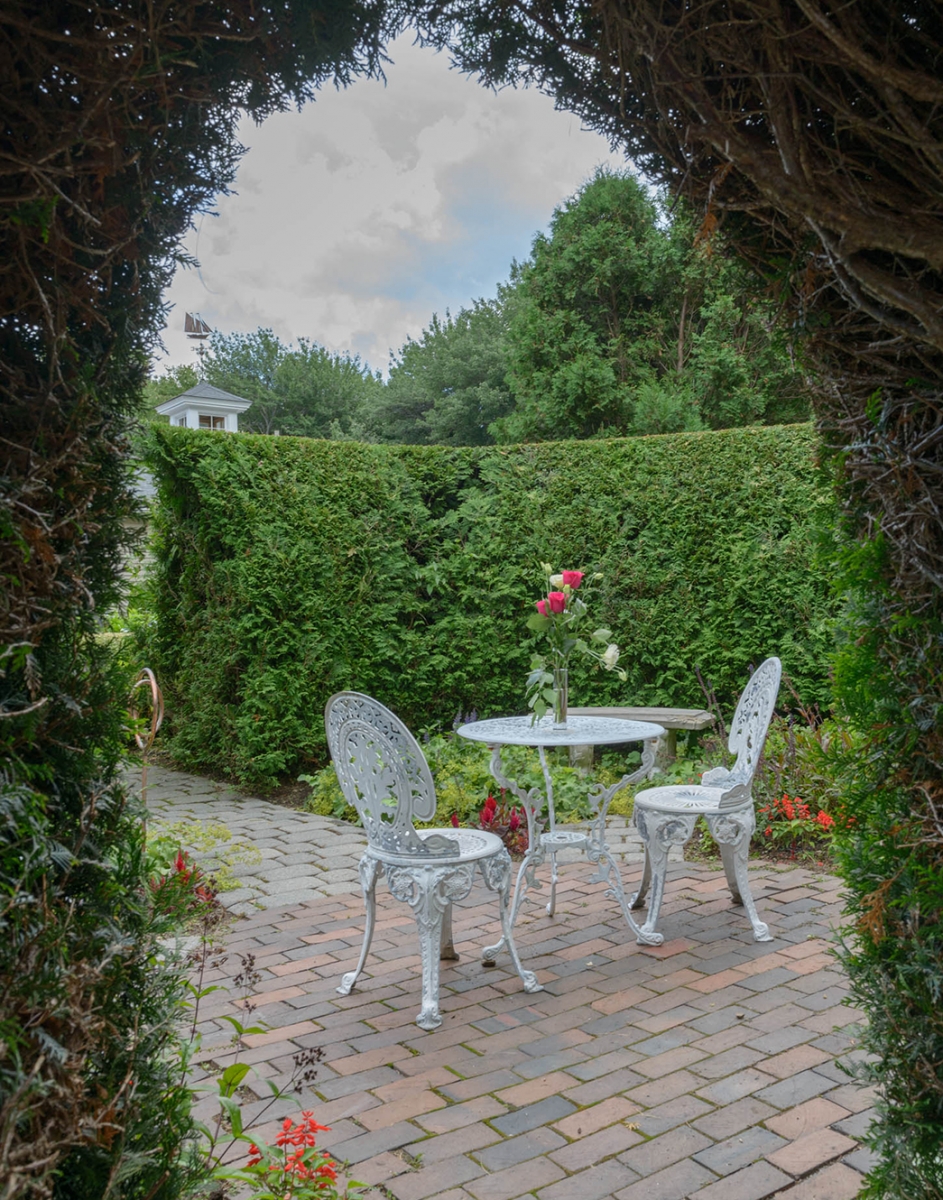 Over the sink, Houghton and the homeowner worked together to create a box window that looks southwesterly over the courtyard. The window fits in with the roof, and the casement windows open to catch the breeze.

Houghton and his crew opened up the breakfast nook’s doorway and did all the detailing of the interior trim. The crown molding came from a California company. “It had to be handled very carefully,” Houghton says. “It’s so detailed that you have to match one strip to another as if it was a wallpaper.”

When the molding was complete, the final effect was so light and pretty that the homeowner decided against window treatments.

The homeowner and Gowing spent a couple of long sessions together, analyzing the measurements of each cabinet and every drawer in order to ensure that everything had a place.

The doors on custom cabinets include many decisions. “I challenged Jamie with the request for mitered double-framed doors with an inset burl wood panel,” the homeowner says. “He never said, ‘Can’t be done.’ We would talk, and he would quietly think about it and, later, come back with a plan.”

The cabinets and kitchen island function like finely made antique furniture. There are slide-out vegetable drawers with custom wicker baskets; a warming drawer; refrigerated drawers for salad and sandwich makings; and a complete baking station with drawers for appliances and ingredients. Touch-to-pop-out spice racks are concealed behind carved pilasters.

To take advantage of every bit of space, the homeowner’s cutlery drawers are thirty inches deep—that’s nine inches more than standard. Even the trash cans are a bit larger than the norm to accommodate large gatherings without constant emptying. 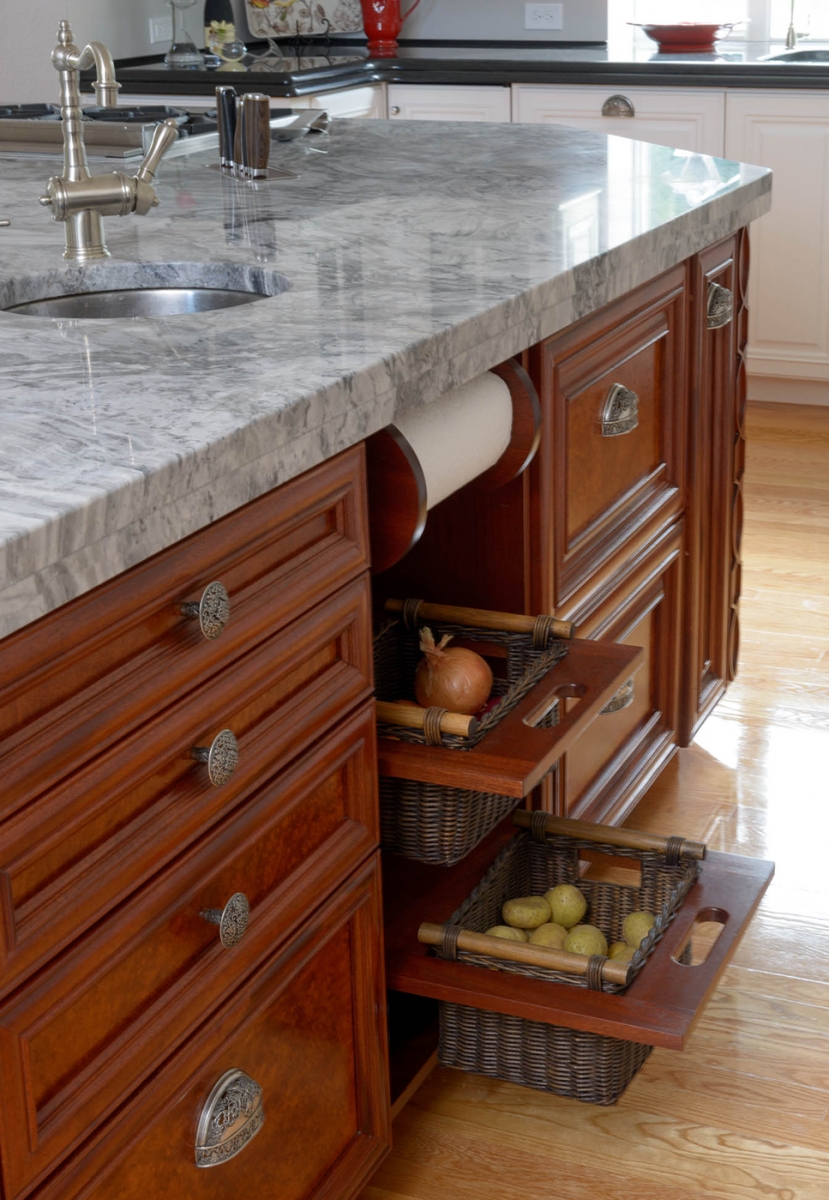 The kitchen island’s cabinets have carved moldings with rich burl panels framed in mahogany and accented with brushed nickel, filigree hardware. The wall cabinets, by contrast, are white and the countertop against that wall is black granite. The hardware is nickel with crystal decoration, which complements the three chandeliers. “I just wanted a little bling,” says the homeowner. “When the sun shines on them, they throw prisms all around the room.”

Working with interior designer Colleen Lake of The Look Interiors in Stratham, the homeowner chose her cabinetry hardware and the paint color for her kitchen. She knew the paint color had to contrast with the paprika red of the plates made by the Italian company Vietri.

“I saw the red, bought a small platter and carried it around in my pocketbook for the longest time,” she says. “I wanted the red to be my ‘pop.’  I had settled on gray but couldn’t find the right one. I called Colleen. She came to the house, and the decision was made in an afternoon!”

“As a designer, when I visited the homeowner, I took some time to read the house,” Lake says. “I like to get a feel for how it sits on the property, and where the morning and afternoon light shine in.”

When they sat down, Lake pulled out her fan deck of colors. In no time, a warm shade of gray jumped out for the homeowner. This color provided contrast for the kitchen’s white woodwork, yet was a neutral canvas for the black countertop and light marble-topped island. The homeowner calls this the yin-yang effect. Even the crystal chandeliers echo this with a “rust” metal armature.

Lake also suggested cabinetry hardware embellished with Swarovski crystals. “We bedazzled the kitchen,” she says with a laugh. “It’s a soothing, sophisticated and glamorous look.”

But, you might ask, does the finished kitchen pass the all-important Cookie Monster test? With a wall oven and built-in shelves for several professionally sized cookie sheets, the answer is yes, absolutely.

As her photo albums attest, the homeowner’s hospitality and home have created a place where many have formed cherished memories.