A Fresh Take on Traditional Style

Jeffrey S. Roberts carves a mahogany ball-in-claw foot in his Unity studio. The foot is similar to the one seen on the bombé desk.

Hard work eventually pays off, as Jeffrey S. Roberts can attest. At age eighteen in 1980, he knew he’d found his calling to make fine furniture when he toured the North Bennet Street School in Boston, which trains students for careers in traditional trades. “I was blown away with the carving and joinery they were doing there,” he says.

Fast forward to this year, when his efforts were recognized by the Society of American Period Furniture Makers. Their coveted Cartouche Award for lifetime achievement is given to someone who has demonstrated a lifetime love for period furniture, shown a mastery of skills and techniques, and demonstrated devotion to advancing the craft and a willingness to help others learn. “This award has gotten me more attention than I’ve ever had,” Roberts says.

New Hampshire Home [NHH]: How did you discover your passion for making furniture?

Jeffrey S. Roberts (JSR): I knew I liked working with my hands in high school, but wood shop didn’t interest me then. When I toured the North Bennet Street School, I discovered furniture making and knew that’s what I wanted to learn.

NHH: What did you learn there?

JSR: At North Bennet Street School, I studied with Phil Lowe, Lance Patterson and George Fullerton, and got a solid foundation in joinery, design, carving and building techniques. What really attracted me was carving, and I considered going to carving school in Germany or at Rhode Island School of Design after North Bennet, but that would have been costly.

While I was in school, I worked in a small shop in the basement of my mother’s home in Halifax, Massachusetts. I’d practice by making jewelry boxes with carvings on the tops, and would give those as gifts to family members and friends.

NHH: Would you call your work traditional in style?

JSR: At North Bennet, you learn traditional methods, but that doesn’t necessarily mean that what you’re doing is reproduction work. I like working with clients to create new pieces that look like they could have been built in the eighteenth century, but are built to reflect a client’s design preferences or to fit in a certain place in their home.

I’ve had clients look at photos and ask if I can make that piece. One client saw a photo of a bombé desk on Sotheby’s website and asked me to design a smaller version of that piece that would work for their space. I really enjoy commissions like this.

NHH: What did you do when you finished school?

JSR: North Bennet gave me a good start, but the next twenty or so years of working alongside other furniture makers on Boston’s South Shore was a huge part of my learning experience. I built hundreds of pieces in period styles.

NHH: What brought you to New Hampshire?

JSR: I always loved camping and hiking in the White Mountains. So I began looking in New Hampshire and Vermont for a house with a shop. In May 2007, I found this house in Unity where we now live. My shop used to be an RV garage so it is huge—it was three years old when we bought the house. I have lots of room to move around, and pull my truck in to load and unload it. The garage had been used for storage, so I had to do very little work before my shop was up and running. I have a short commute to work—just a walk across the driveway—and our yard looks beautiful, thanks to my wife Jo, who’s a wonderful gardener.

NHH: How did you get involved with the New Hampshire Furniture Masters?

JSR: I met Terry Moore and Jeffrey Cooper at the League of New Hampshire Craftsmen Fair—I had gotten juried in to the league in 2008 and we were all displaying work at the Living with Craft exhibit. They encouraged me to apply to the Furniture Masters. Terry and Jeff also introduced me to David Lamb, who was chair of the Furniture Masters at that time.

For this year’s Furniture Masters’ exhibit and auction, Jeffrey S. Roberts designed a mahogany sideboard that has traditional proportions but a contemporary look. Its tapered legs have a simple, slightly curved line and small feet. The single central drawer is bowed, and has a carving of apple blossoms, a butterfly and a bee (see close-up at left). “This carving took me weeks to do,” Roberts says.

The Furniture Masters is a great group of people. I’m inspired by how creative they are—they have always been helpful and encourage me to take new directions in my work. I really enjoy the opportunity to build a spec piece each year for the exhibits and annual auction.

NHH: What will you be showing at this year’s auction?

JSR: This year, I’m building a mahogany sideboard that’s more contemporary in design, with the front central drawer being a large area for a carving of apple blossoms, a bee and a butterfly. It’s a major carving that took weeks to do.

It’s becoming more and more important to me to carve scenes from nature—close-ups of bugs, small animals and flowers. When I designed this particular sideboard, my main goal was to create a piece that could showcase an intricate carving as the featured element. I plan to partner with a nature conservation organization to donate some of the proceeds from the sale of this piece at our annual auction and add another voice to the movement to protect wildlife.

NHH: What a feather in your cap to have received the Cartouche Award— congratulations!

JSR: Yes, it is, and thanks so much. I received the award in February in Williamsburg, Virginia, and did a presentation for everyone at the banquet. This award is so significant because of the national profile it gives me, and I hope it will help expand my reach. It’s so gratifying to be acknowledged and so nice to hear such positive feedback in such a public way. 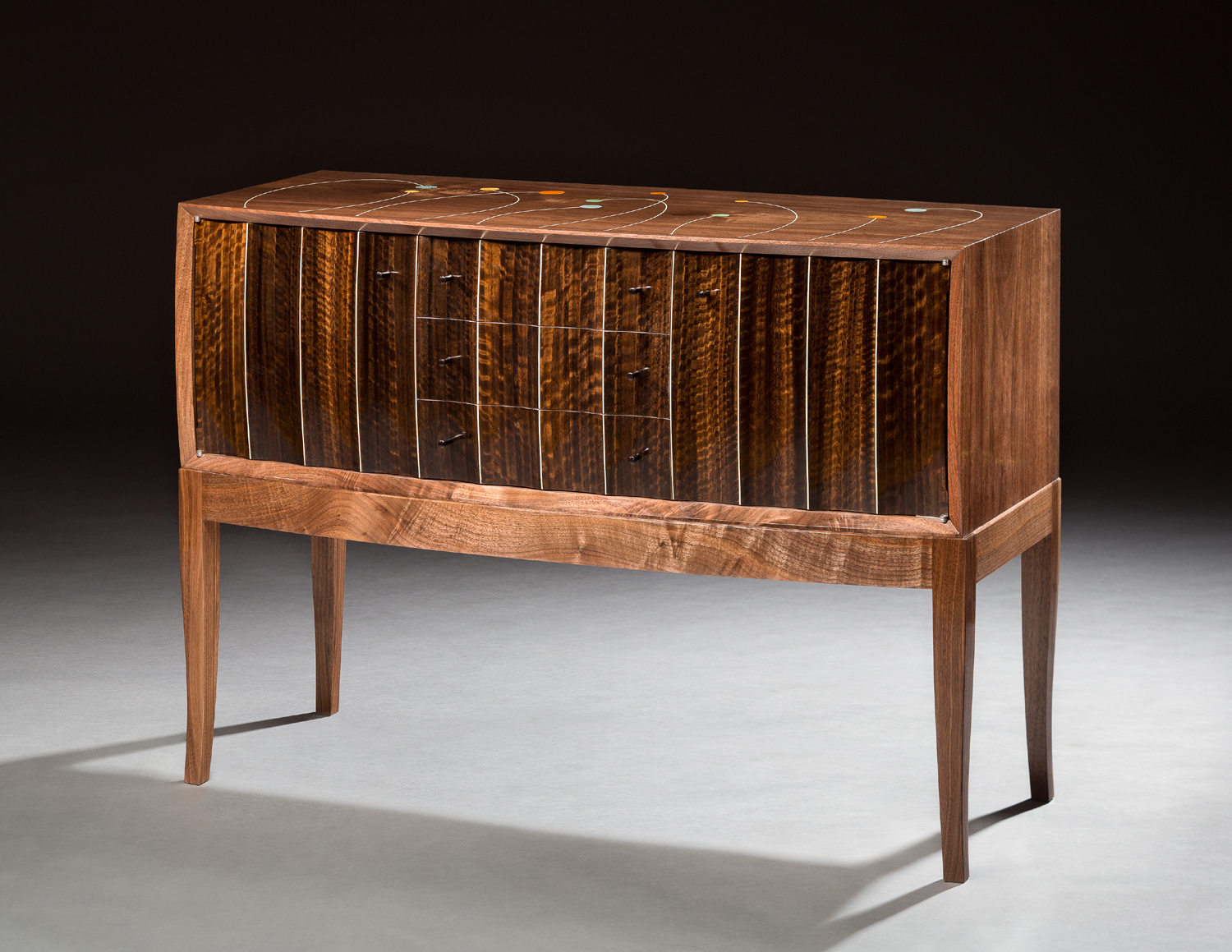 Escape Velocity is up for auction on October 1. Made from walnut, fumed eucalyptus, holly and dyed veneers, the piece is by New Hampshire Furniture Master Owain Harris, whose studio is in Deerfield.

Where to Find Fabulous Furniture

You can see new work by Jeffrey S. Roberts, along with other New Hampshire Furniture Masters, at the New Hampshire Furniture Masters 2017: Inspiration, Design, Technique, which opens on September 19. The main event takes place Sunday, October 1, with a gala open house and and silent auction from 1 to 4:30 p.m., followed by a live auction at 5 p.m. and dinner at 6 p.m. The open house and silent and live auctions are free and open to the public. Tickets for dinner are available online.