A Garden of One’s Own

A landscape designer creates a masterpiece at home 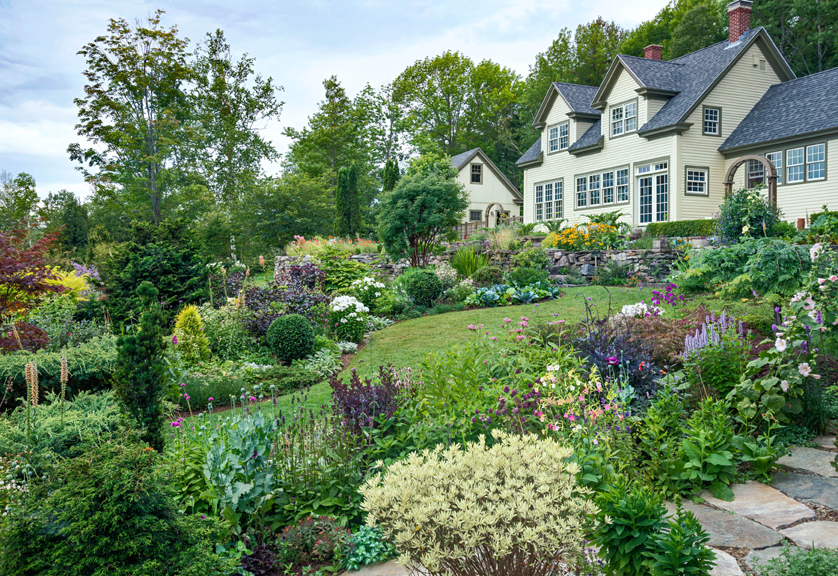 Center Pond Farm in Stoddard is the home of landscape designer Jenny Lee Hughes
and her husband Edward Yoxen. Inviting gardens designed and planted by Hughes
cascade on the south-facing slope away from the house.

Unlike the shoemaker’s children who might go barefoot, the garden of a landscape designer is usually a showpiece. Center Pond Farm in Stoddard, the home of Edward Yoxen and garden designer Jenny Lee Hughes, is a proving ground for her design ideas and a second chance for some of her clients’ unwanted plants. “Having a private place to experiment with plants and combinations of plants is important,” says Hughes, who has been designing gardens since 1984.

It has been said that all gardening is landscape painting, and upon setting foot in this garden, it’s as if you have stepped into a masterpiece. Looking from the house, which Hughes describes as Greek Revival-ish, there’s a view of the whole garden, sheep pasture, neighboring Center Pond and distant hills.

The upper terrace has a Mediterranean feel with stone-lined paths and a peastone walkway. Here plants such as lavender, cardoon, thyme and artichokes thrive in the warmth radiated from the hardscape. Hughes lets poppies and a broad-leaved arugula self-seed among the stones. More herbs—including parsley, dill, Thai basil, oregano, rue and tarragon—intermingle with lamium, cabbages, rose campion and broccoli. Kiwi vines flank the entry archway, and heat-loving vegetables (such as squash and corn) grow in the rich soil next to the garage. The lower terrace is carpeted with more varieties of thyme; beds of breadseed poppies, black-eyed Susans and salvias are edged with boxwood.

Gardens flow down the south-facing slope—a blend of foliage textures and colors with pops of bloom to draw the eye; there’s white phlox, bright orange crocosmia ‘Lucifer’, purple Verbena bonariensis and pink nicotiana to name just a few. “Every year I like different colors,” Hughes says.

The stonework is quite extensive, taming the slope near the house. “We used up the piles of rocks that were in the field,” Hughes says, “and now we use a mix of stones. Some are from the quarry in Acworth, and the steps are part of an old house foundation. Some of the stones even have fossils in them.” Over the years, Yoxen and Hughes have had various people help with stonework, including Errol Cousins of Stoddard and Bob Taylor of Taylor Land Services in Peterborough.

Wide mown paths and stone-paved walkways lead through the gardens from one lush planting to the next. There is a balanced mix of small trees, evergreens, flowering and fruiting shrubs, perennials, vegetables and annuals. Several pairs of tall arborvitae ‘DeGroot’s Spire’ (Thuja occidentalis) stand like sentinels, marking the major path from the house to the lower gardens.

Many of the gardens are edged with boxwoods, an evergreen shrub Hughes prefers. “They are less trouble than rhododendrons and yews attract deer big time,” she says. 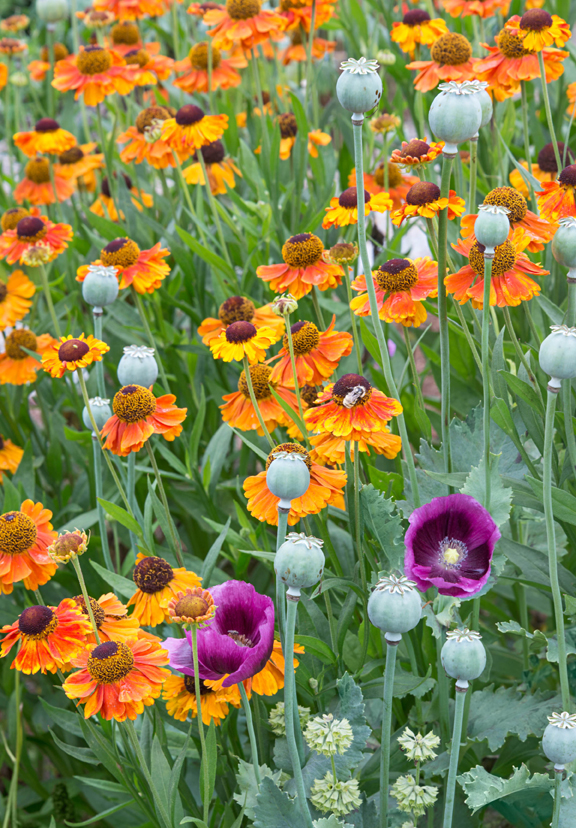 Plantings of ‘Bright Lights’ chard grow in an upper bed next to the steps, bringing the colorful vegetables to eye level. The chard looks right at home among the ornamentals. Throughout the gardens, vegetables are not segregated but interplanted with perennials, fruits and annuals; Hughes says she
appreciates the beauty of the vegetables’ colors and textural qualities.

It is companion planting at its best. Zinnias grow with the pole beans, ageratum near the watermelons, nigella pods next to the squash. “It’s good for pollination to have a mix of blossoms that attracts the bees,” says Hughes.

As one crop is harvested, Yoxen and Hughes replant to keep the garden productive from spring through late frosts. Yoxen does a lot of work harvesting and putting up vegetables, along with any tractor work, pruning and other farm chores.

Espaliered fruit trees act as fencing around many of the vegetables beds and need a lot of pruning to keep them in shape. “The apples are so productive!” says Hughes.

Along with the espaliered fruit, Hughes and Yoxen also have a small orchard. “We bought the plants as whips a long time ago,” she explains. Now they have apples including Gala, Macoun, Braeburn, Cortland, Liberty and Wealthy; Red Haven and Reliance peaches; Bartlett, Bosc and Seckel pears; Mount Royal plums; and Montmorency and Stella cherries growing along with Tina and Centennial crabapples.

Gardens tend to evolve, and what was once a shade garden now receives a lot more sun after the trees around it came down in an ice storm. “We lost a large, picturesque apple tree, a large cherry and some evergreens,” Hughes explains.

This has forced Hughes and Yoxen to make some changes, such as swapping out shade-loving groundcovers in favor of perennials that thrive in full sun. Broadleaved evergreens such as Pieris floribunda and a large, very old rhododendron seemed out of place to Hughes, and the daphnes did not like the sun, so they were all moved to new locations around the yard. “Gardening to me is all about change anyway,” Hughes says, “so it is not unusual to take something out and try something new.” 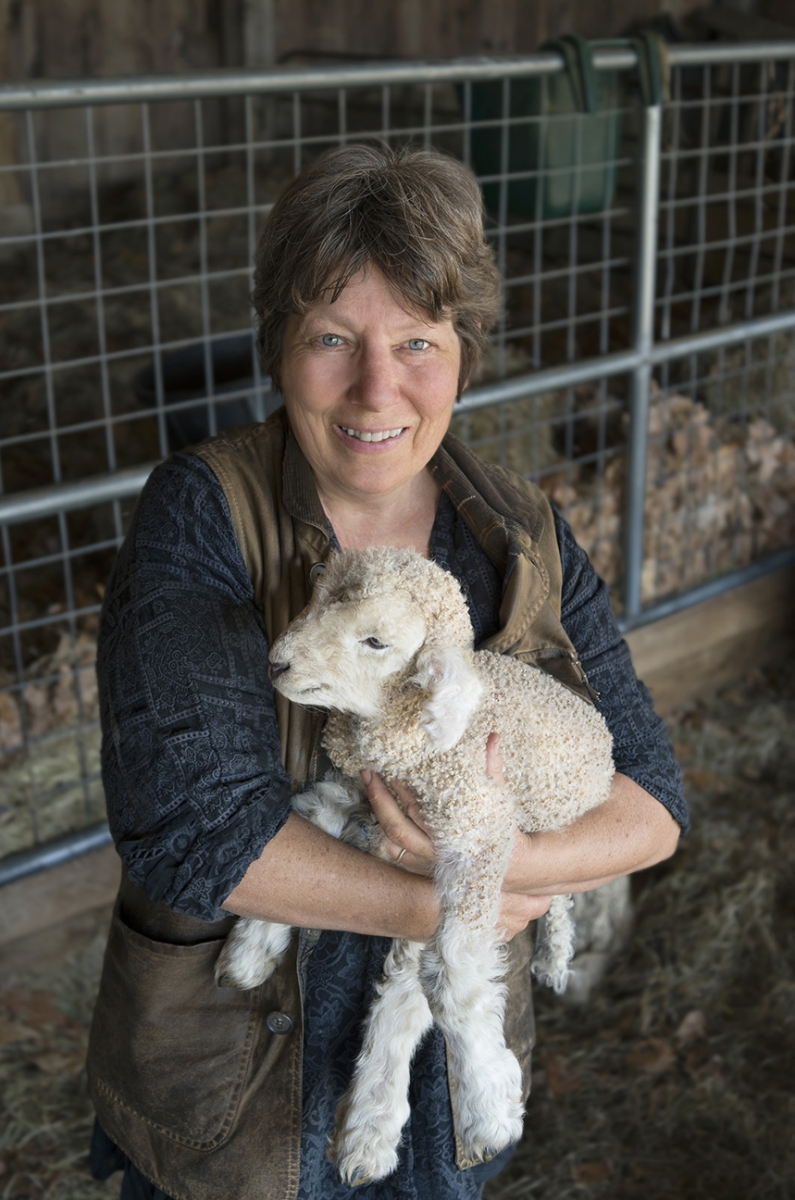 Jenny Lee Hughes holds
a new addition to her flock
of Romneys.

In the pasture below the garden, Hughes has a flock of Romney sheep. Along with producing wonderfully soft wool, they produce lots of manure that she uses to enrich her planting beds. Hughes took the sheep when her elderly parents could no longer care for them. “My mom had put her heart and soul into breeding this herd of Romneys, and we had room for them here,” Hughes says. “Growing up, I didn’t appreciate all the time she spent on her sheep, but I have since fallen in love with them.”

Hughes has gardened here since 2006. “It is nice to have my own garden after having gardened for other people for years,” she says. “But designing is harder to do for yourself; I like to bounce ideas off people. I like my clients; working with them enables me to have different gardens, and having restrictions can bring about great results. If I have a client who isn’t sure of what they want, it is easier to figure out what they would like once I get to know them. It is harder to know your own personality.”

The gardens at Center Pond Farm are a reflection of this talented woman’s personality and love of plants. 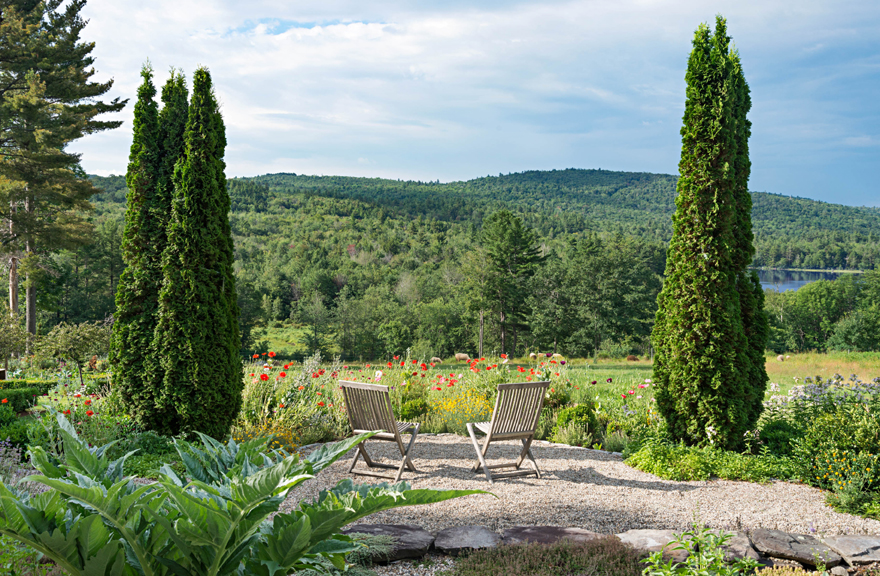 Jenny Lee Hughes feels that gardens have an uplifting effect on people. From these chairs, she can sit and watch the sheep grazing in the lower pasture. 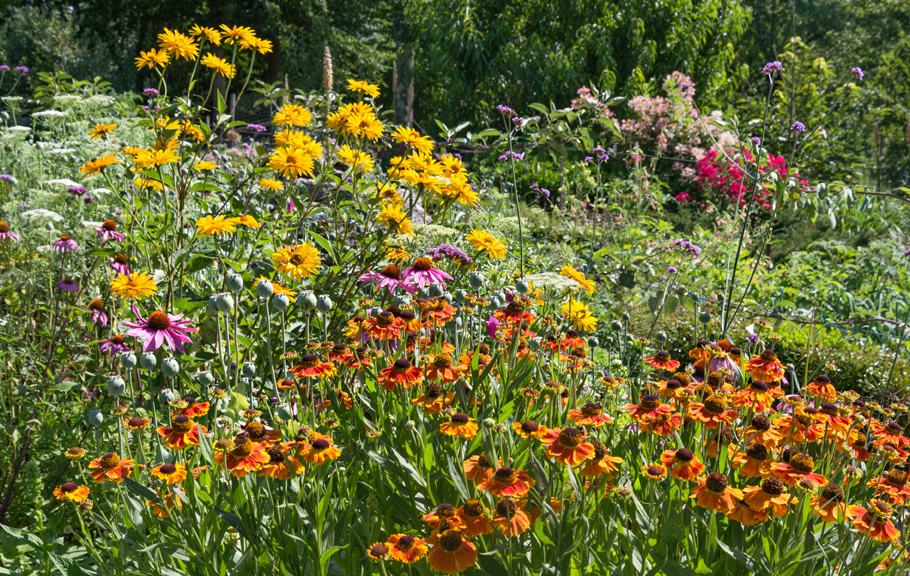 A mix of late-blooming plants keeps the gardens colorful all season long. 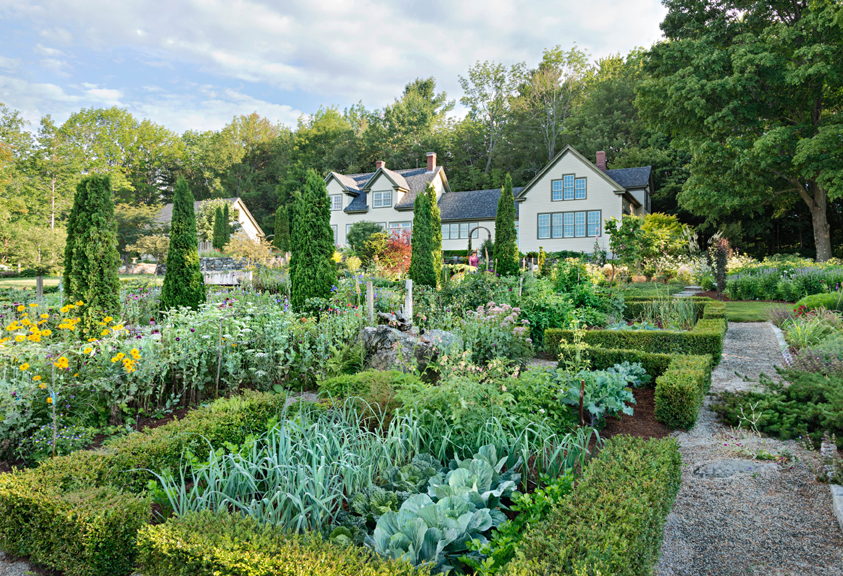 The addition of many flowers and clipped boxwood hedges elevates the vegetable garden to a more sophisticated level. 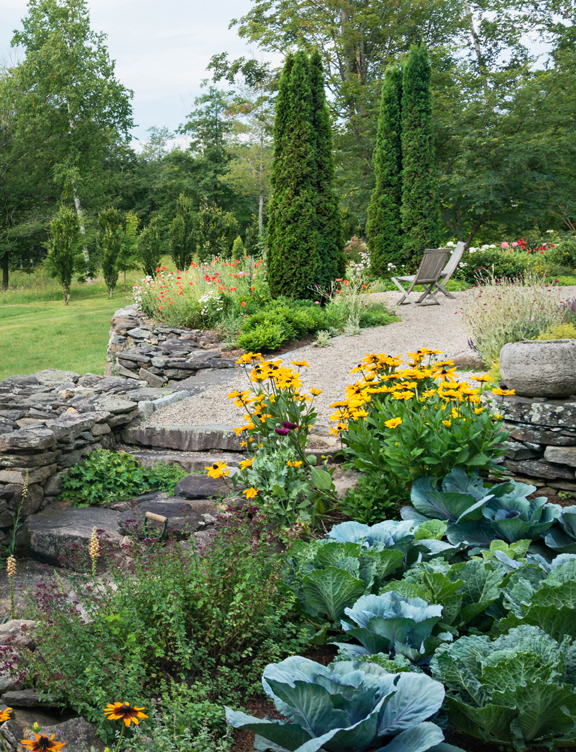 The scree garden on the upper terrace has a Mediterranean feel. Landscape designer Jenny Lee Hughes believes in mixing the practical – cabbages – with the pretty – rudbeckias. 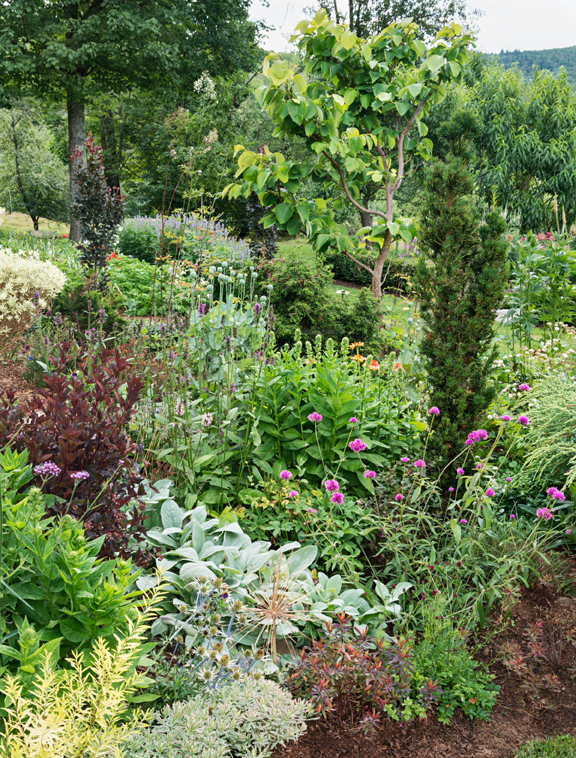 Layers of plants- including evergreens, small trees,
shrubs, self-sowing annuals and ground-covers –
create a richly textured border in Jenny Lee Hughes's
garden, which is on the Garden Conservancy's
Open Days tour on August 20.

If you would like to visit Jenny Lee Hughes’s garden at Center Pond Farm and other outstanding private gardens, this summer is your chance. The Garden Conservancy Open Days will host tours of six gardens in the Monadnock Region on Saturday, August 20, and four gardens in western New Hampshire and southern Vermont on Sunday, August 21. Hours vary by garden, but most are open from 10 a.m. to 4 p.m. Admission to each garden is $7.

To get your gardening juices flowing, on Friday, August 19, author and garden expert Paige Dickey will speak about “Outstanding American Gardens: A Celebration—25 Years of the Garden Conservancy.” The lecture begins at 7 p.m. in Bass Hall at the Monadnock Center for History and Culture in Peterborough. There is a $10 fee, and a book signing will follow.

This year, the garden tours feature talks called “Experts in the Garden”:

• On Saturday, August 20, Tovah Martin will present “The Nostril Chronicles: Fragrance in the Garden” at 3 p.m. at the Center Pond Farm garden in Stoddard. Since Jenny Lee Hughes has an abundance of plants with fragrant foliage or flowers, there will be lots to talk about. Come and learn from the experts about ramping up the fragrance quotient in your garden.

• On Sunday, August 21, Gordon and Mary Hayward will present a “Walking Design Workshop” at their garden in Westminster, Vermont, at 4 p.m. Please note that pre-registration is required for the workshop, and there is a fee. This is a not-to-be-missed opportunity to learn about design from this extraordinary couple.

For more information, to register for the Hayward’s workshop or for directions to the gardens, call the Garden Conservancy at (888) 842-2442 or visit www.gardenconservancy.org/open-days.