A small and extraordinary garden flourishes, thanks to the vision and skills of its homeowner.

When Peterborough optometrist Michael Gordon is not working to bring people's eyesight into sharp focus, his attention is on the garden. Located in town on a steep, third-of-an-acre lot, his home garden is terraced into three levels.

"Building the terraces was my first priority, so for the first ten years, the yard was a construction site," he says. "We moved a lot of dirt with wheelbarrows. Long ago, there had been a barn on one side of the house and the old granite foundation helped to define part of the upper terrace."

After the hardscape was done, Gordon concentrated on the woody framework, putting in a yew hedge and placing the trees. "In a small garden, every tree should be special," he says. "I really paid attention to ones with blossoms, fruit, interest­ing bark, or colorful foliage in spring and fall to get as much interest as possible in all seasons.

Looking down on the garden from an upstairs window, it is easy to appreciate Michael Gordon’s emphasis on foliage colors, textures and shapes that make this garden so interesting.

He is especially proud of his unusual paperbark maple (Acer griseum x 'Gingerbread'). The rich cinnamon-brown bark peels back to reveal the colors underneath, making a striking contrast against the snow in winter; attractive trifoliate leaves give excellent russet-red fall color. "It is crossed with a Nikko maple (Acer nikoense) so it is hardier and faster growing than a regu­lar paperbark maple," Gordon says.

When choosing trees for a small lot, Gordon advises us to bear in mind the mature height of the tree. "Don't grow a forest-size tree, always go smaller. The stewartia, for example, will feel like a tree but it won't overpower the lot."

Dealing with such a steep slope-from the upper terraces, you look out over neighboring rooftops-would have been daunting for most gardeners, but Gordon says, "If you solve it well, the biggest problem you encounter turns out to be your biggest asset."

Dividing the property into smaller sections-or rooms-enabled Gordon to address each terrace individually and give each its own feel. The top terrace in front of the house is the public face, filled with roses, annual poppies, dark-leaved ligularia and a 'Betty Corning' clematis clamoring up through an old crabapple. "Since this level was designed for the enjoyment of passersby, it is more flashy," he says.

The next level is more private. Provence-inspired, it has topiaries and rounds of boxwood, gray foliage and subtle colors with not as many flowers. "This is where we relax at the end of the day or entertain, and the subdued colors look good in that late daylight," Gordon explains. 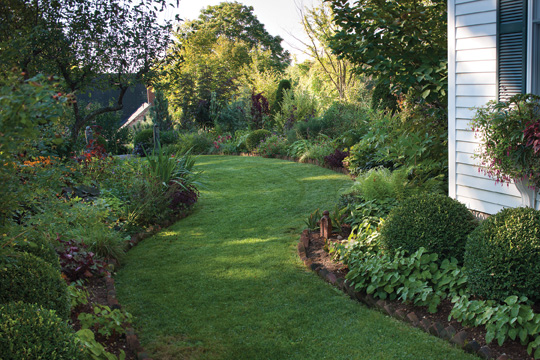 Offering a view over neighboring rooftops, the wide winding grass path between the upper borders is edged with brick. Colorful even as summer wanes, the late blooming flowers and foliage of chartreuse and burgundy keep the garden looking lush.

Many people view fall as the end of the garden, but Gordon feels this can be the best time of year. "Especially in New England, we are surrounded by such beauty in the fall; you just want to be out there. The temperatures are per­fect; there are no bugs, no weeding and little watering to do. You can sit back and enjoy it."

Gordon's garden is full of plants with attractive, reliable foliage that maintain their good looks even after flowering. For example, he tends fragrant bugbane (Cimicifuga ramosa 'Brunette'), globe thistle (Echinops ruthenicus), choc­olate-leaved Ligularia dentata 'Britt-Marie Crawford' and variegated Russian comfrey (Symphytum x uplandicum 'Axminster Gold'). Verbena bonariensis forms a link between summer and fall, while Salvia 'Indigo Spires', numerous asters, tithonia and 'Profusion' zinnias all kick in with late-season color. "A lot of interesting annuals make the garden look good even as it is winding down in the fall. Take out any ratty stuff and put in something fresh," Gordon says.

From private to public gardens

Once Gordon had his own garden well under way, he set his sights on some of the public parks around town. "Community service is something that is very important to me," he says. "I am on the Parks Committee in Peter-borough, and after visiting some pub­ lic gardens in Manhattan with their designer Lynden Miller, I was inspired. She was my mentor and she showed me that you can have top-notch gar­dens in any town. It was her model of public and private partnership that I followed. There is grant money avail­able through the Goyette Memorial Fund in Peterborough that is ear­marked for the betterment of the town, and we have been able to tap into that for the parks."

Currently Gordon and other volun­teers plant and maintain five gardens around town. "We have a good crew," Gordon says. "Every Wednesday we meet to work on the parks, and whoever can come and work that day comes. We also have a good collaboration with the town crew and our town administrator, Pam Brenner."

Like any public gardens, those that Gordon is involved with have been the target of some vandalism, but he doesn't let that change his outlook. "Vandalism leads us to make things better. First we fix it immediately and keep maintain­ing it so the gardens always look good. We have learned a lot about the way people use the spaces and try to direct the walkers and dogs by using fencing and hedges," Gordon says.

For years, Gordon has read books, attended horticultural symposiums and seen other gardens. "I spent a lot of time visiting high-caliber gardens," he says. "When you go to really good gardens, you get really good ideas. You have a chance to see for yourself what works and what doesn't, what makes it good, what you like and what you don't like. I also realized that I could do this, too. There is no such thing as an original gardening idea. My gar­dens are an amalgamation of so many better gardens."

An avid plantsman, Gordon keeps a journal of all the plants he has used over the years in both his own garden and in the public gardens. "There are so many plants to choose from," he says. "In the public gardens, I get to try trees and new plants in other places. I think I spe­cialize in unusual plants because I like trying something different. If you don't have that big a space, it is not hard to have a few unusual plants. Just have fun with it."

Gordon also maintains an online blog called the Gardener's Eye. Check it out at thegardenerseye.blogspot.com.