Built in 1758, the John Paul Jones House and its gardens are Portsmouth landmarks worth seeing. 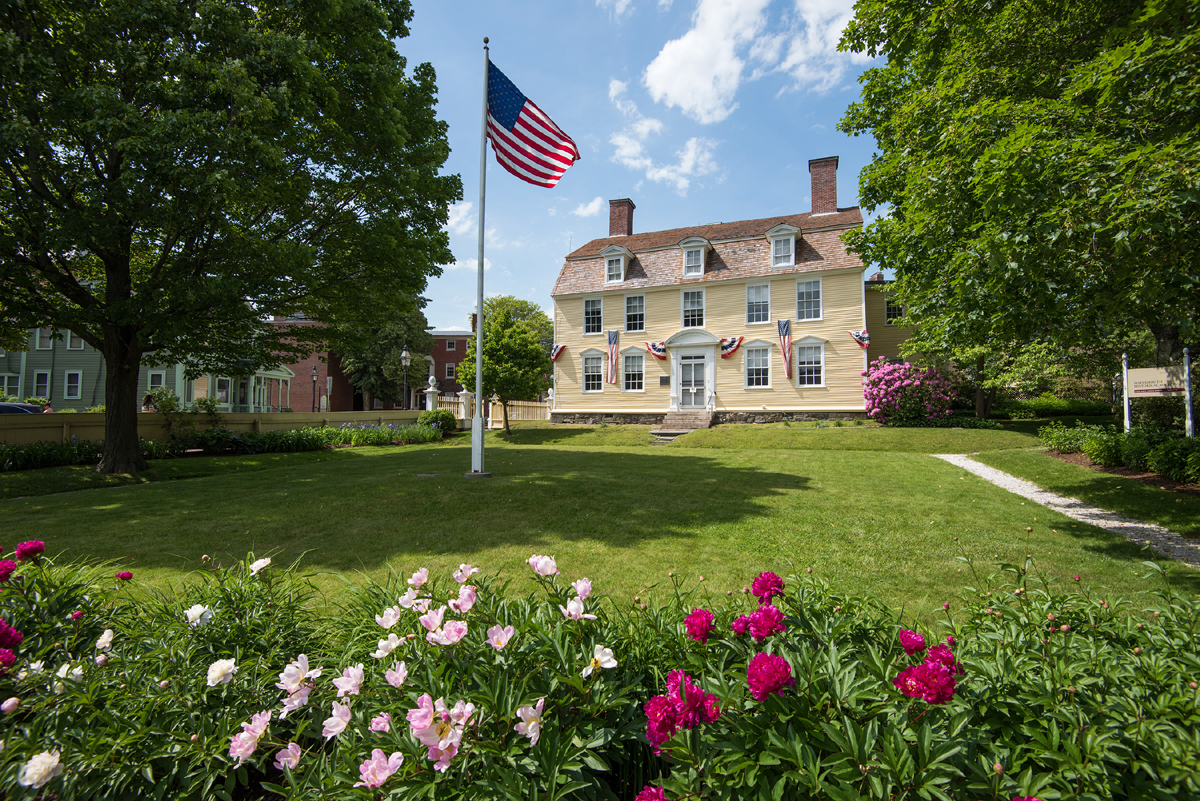 Built in 1758, the John Paul Jones House—the showpiece of the Portsmouth Historical Society—has been a museum for one hundred years. Peonies are abloom in the garden.

John Paul Jones—a famed hero of the American Revolution—is credited by historians as one of the founders of the U.S. Navy. Also renowned is the grand Georgian house named for him: the John Paul Jones House, located on a busy street corner in downtown Portsmouth.

A National Historic Landmark, the 3½-story, yellow and white house is owned by the Portsmouth Historical Society, and offers a fascinating glimpse of eighteenth- and nineteenth-century Portsmouth and the surrounding region, when the city was a busy maritime port. Self-guided tours of the home also introduce visitors to John Paul Jones, arguably Portsmouth’s most famous resident. Despite its historic ties, the John Paul Jones House was almost torn down in 1917, part of a tide of development in Portsmouth. “The house was going to be demolished, possibly to make way for a bank,” says curator Gerry Ward. “It’s now been a museum for more than one hundred years.”

When it was built in 1758 by sea captain Gregory Purcell for his wife, Sarah Wentworth (niece of New Hampshire’s first Colonial governor, Benning Wentworth), the John Paul Jones House was one of Portsmouth’s first grand homes. Hopestill Cheswell—a noted, mixed-race housewright from nearby Newmarket—is credited with building the home.

Captain Purcell died suddenly in 1776, leaving Sarah in debt; she rented out rooms to help support herself and her five children. Jones boarded at the home twice. Originally from Scotland, he began his maritime career as a merchant ship owner in the slave trade, then found his way to America after a deadly argument with a crewman. Jones came to Portsmouth in 1777, selected by Congress to appoint and man The Ranger, a ship built on Badger’s Island in the Piscataqua River. He returned as an American naval hero in 1781 and remained until 1782, while a second ship, America, was being outfitted in the area. 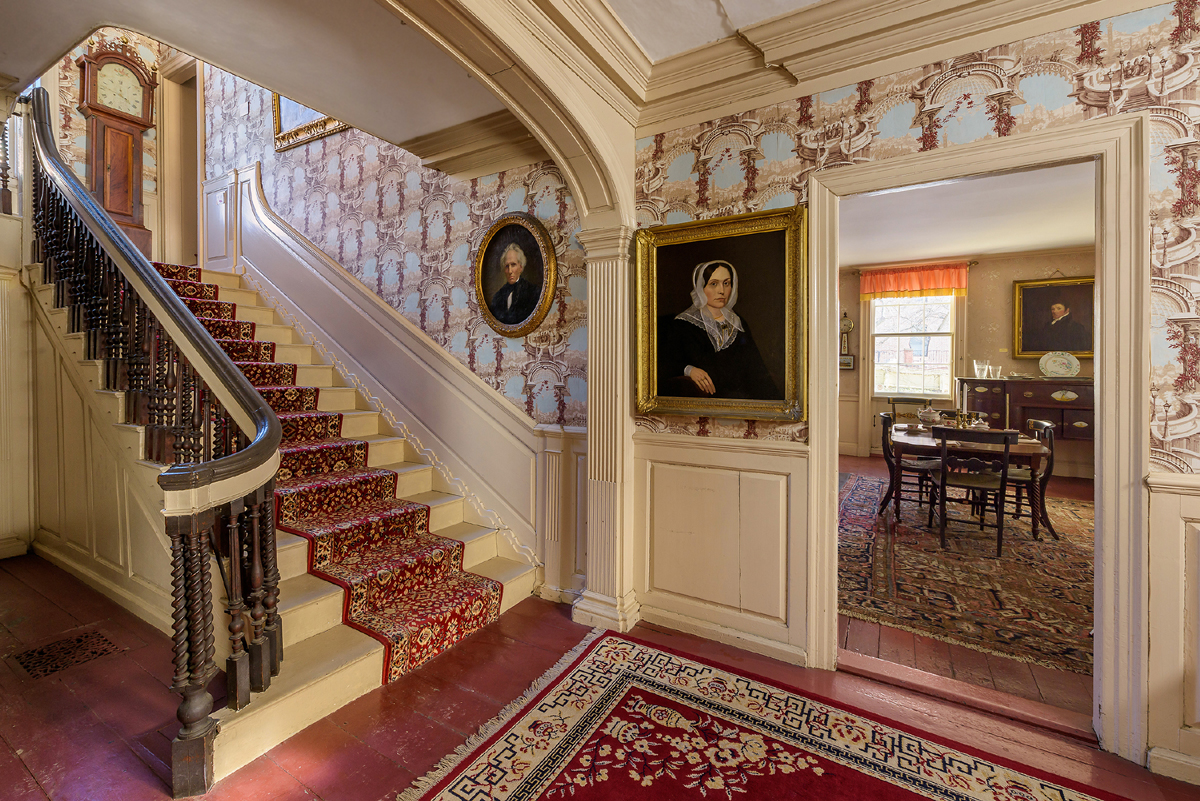 With its crown moldings, the grand central hallway is a distinctive feature of the home’s Georgian design. It’s also where many paintings from the museum’s extensive collection of local portraiture are displayed.

The Purcell/Wentworth home largely remained intact for the next century. Samuel Lord, a prominent local banker, purchased the home in 1852, renovating it and adding a barn and formal gardens. By the time the house was put up for sale in 1917, it had had nine owners.

At the time of the sale, Americans were fascinated by the Colonial Revival, embracing eighteenth-century history, architecture and artifacts. This included a renewed interest in John Paul Jones, whose body was exhumed in 1906 by President Theodore Roosevelt, transported from its original gravesite in Paris, then re-interred in an elaborate tomb at the U.S. Naval Academy in Annapolis, Maryland (an upstairs gallery at the John Paul Jones House highlights his adventures as well as maritime life in Portsmouth and southeastern Maine). The house was purchased by the grandson of Woodbury Langdon—who bought the house from Sarah Purcell—and transferred to a group of citizens who formed the Portsmouth Historical Society in 1917 to turn the John Paul Jones House into a museum. It opened to the public in 1920.

Today, the house showcases the Portsmouth Historical Society’s collections of local paintings, furniture, textiles, decorative arts and more, all donated by local residents (a large collection of historic manuscripts and photographs is housed at the Portsmouth Athenaeum). The home’s interiors still contain the original Georgian molding, panels and carved woodwork. Two rooms on each floor open off the central hallway and staircase. One of the front parlors provides a good example of changes in architectural taste when the 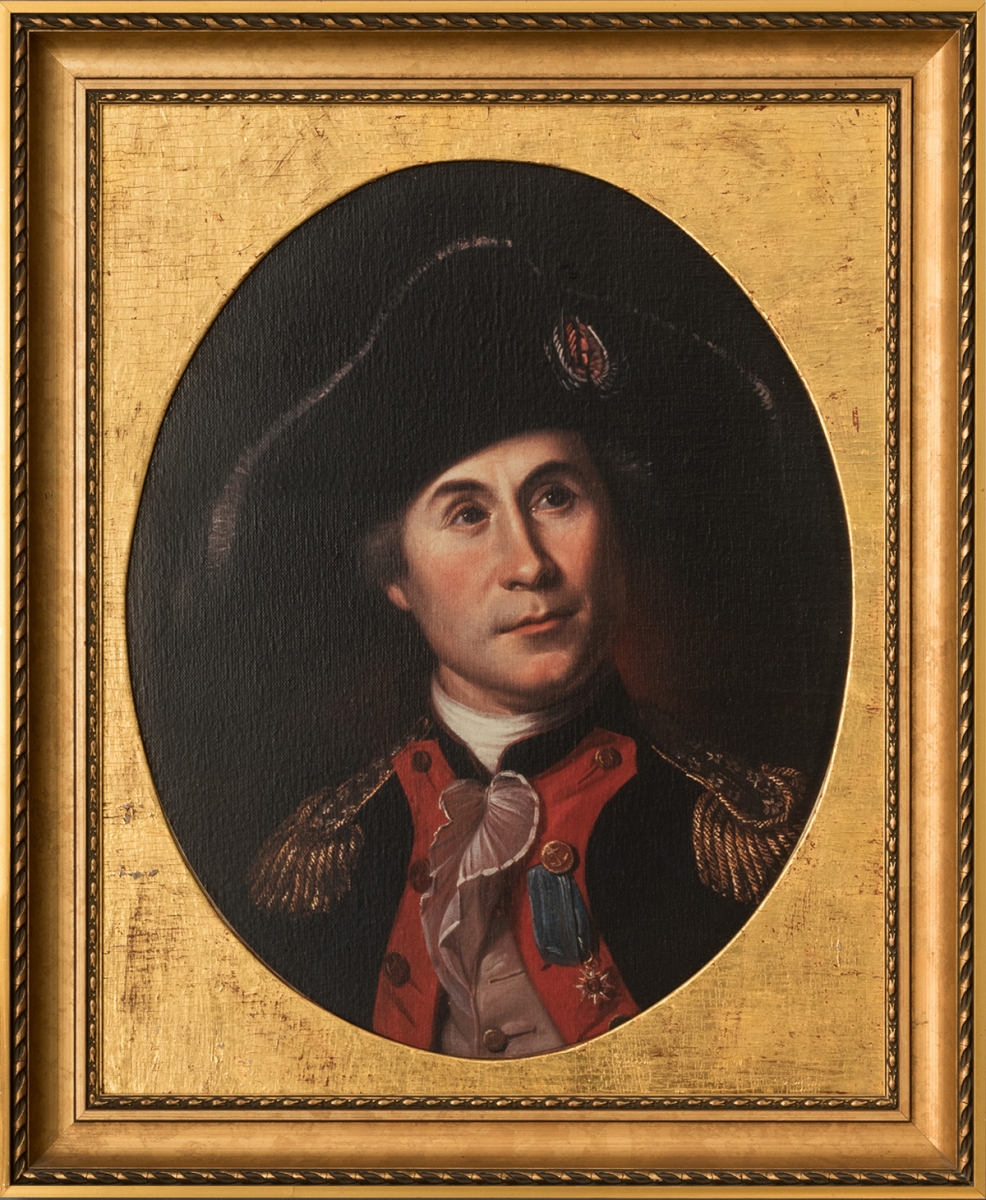 John Paul Jones, shown in this reproduction of an oil painting by Charles Wilson Peale, is credited with being the founder of the U.S. Navy and lived in the house twice during the late eighteenth century.

The first floor includes a front parlor and dining room as well as a special exhibition space (see sidebar) and an ongoing exhibit about the 1905 Russo-Japanese Peace Treaty, negotiated by President Theodore Roosevelt and signed in Portsmouth.

The home’s furnishings and collections evoke the stories of John Paul Jones, Portsmouth and its early residents. “Everything has been given to us by local families,” Ward says. “We’re the only institution in Portsmouth that focuses on Portsmouth history from beginning to end.”

Pieces from the Portsmouth Historical Society’s large collection of Chinese export porcelain and European ceramics are highlighted throughout the house. Many excellent examples of Portsmouth furniture are also displayed, including a mahogany table original to the Purcell family, a chest of drawers by local cabinetmaker Samuel Dockum and a large mahogany sideboard with inset glass details.

Lining the central hall and staircase are portraits of men and women who shaped the area’s history, including the Samuel Badger and Dockum families. One of the Portsmouth Historical Society’s most splendid—and recent—acquisitions is a large painting by prominent early twentieth-century portraitist Edmund Charles Tarbell, who spent summers in nearby New Castle. The Portrait of Mrs. Charles Taintor 1913 came to the historical society from the Fuller Craft Museum in Brockton, Massachusetts.

During late spring and early summer, the John Paul Jones House garden—designed in 1859 by Samuel Lord—is resplendent with lacy peonies and thousands of bright tulips, and fragrant with blooming lilacs. Crushed stone walkways guide visitors around the property and a small memorial garden planted with several varieties of herbs.

It’s likely that John Paul Jones would be proud of the grand home that now bears his name. To learn more, visit the John Paul Jones House, open daily starting May 28, from 11 a.m. to 5 p.m.

Left: The table in the front parlor is set with pieces from the Portsmouth Historical Society’s extensive European and Asian export porcelain collection.

Right: Highlights of the dining room include chairs by Portsmouth furniture maker Langley Boardman, who worked in the late-eighteenth and early nineteenth centuries. The fireplace tiles are late-eighteenth-century English Delftware. 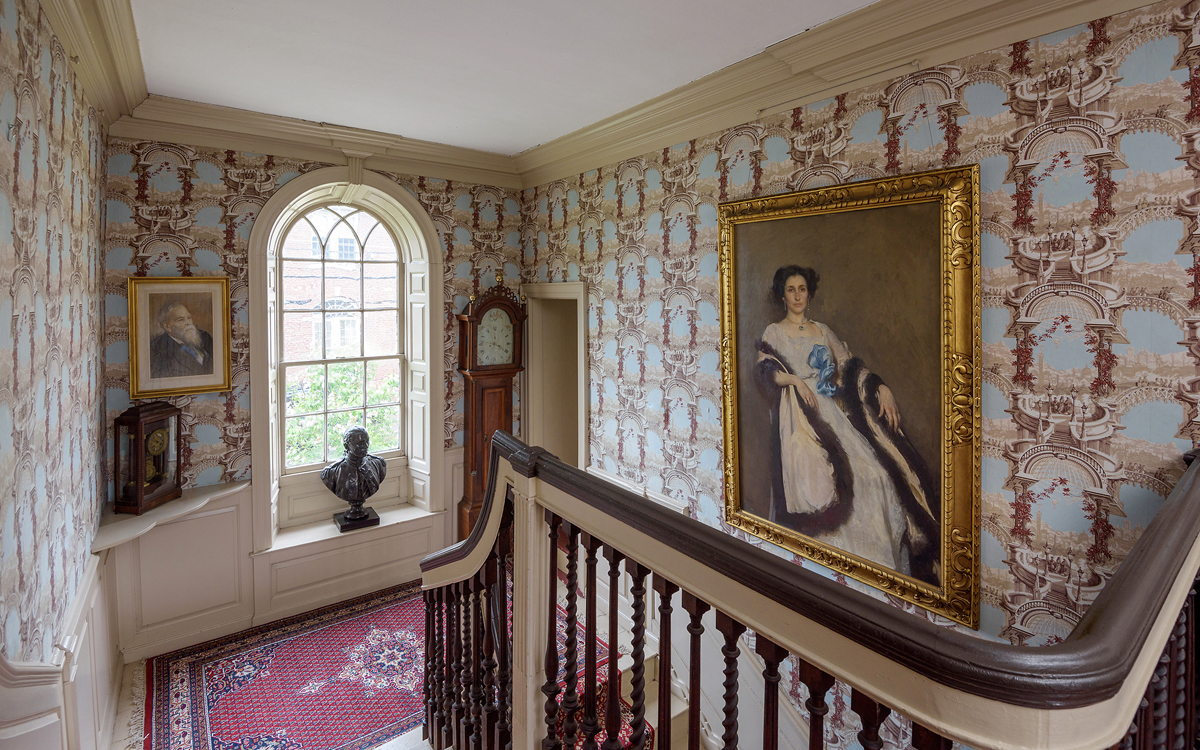 Hanging over the landing is one of the museum’s most recent acquisitions, Portrait of Mrs. Charles Taintor 1913, by noted American artist and New Castle resident Edmund Charles Tarbell. The portrait formerly belonged to the Fuller Craft Museum in Brockton, Massachusetts. 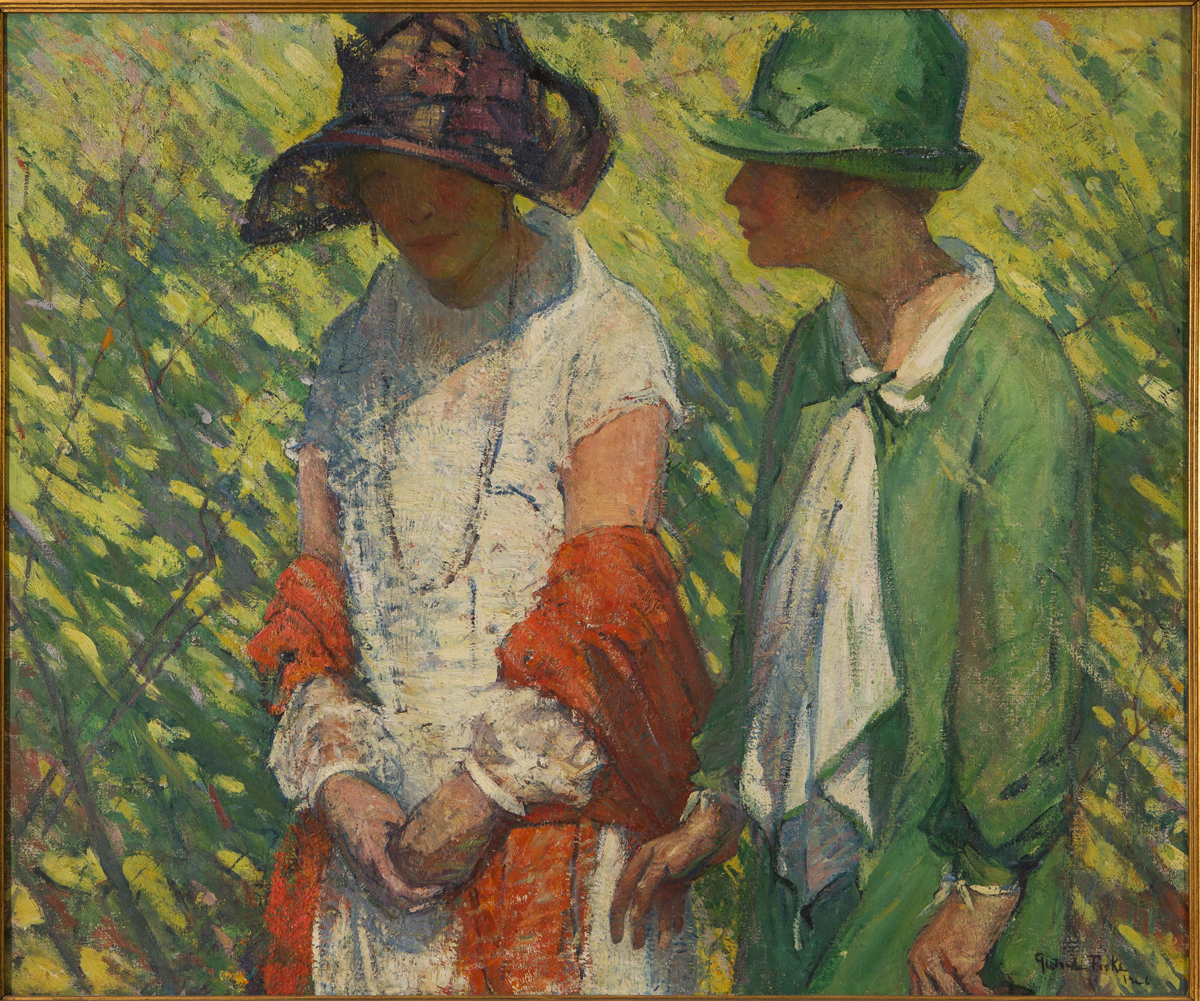 Strollers is a 1925 oil on canvas by Gertrude Fiske.

Open through this fall at Discover Portsmouth, the gallery of the Portsmouth Historical Society, is Gertrude Fiske: American Master, a major retrospective of the work of artist Gertrude Fiske (1879–1961).

A student and peer of American impressionist painters—such as Frank Benson, Phillip Hale and Charles Woodbury—Fiske was heralded by critics and peers for having a strong artistic individuality and vision. She maintained lifelong friendships with “The Pine Hill Girls,” a group of female artists who lived and painted in Ogunquit, Maine, along Pine Hill Road.

The exhibit is complemented by Sisters of the Brush and Palette, an exhibition of works by some of Fiske’s contemporaries, including Anne Carleton, Margaret J. Patterson and Susan Ricker Knox.