Interior designers worked their magic on one of Nashua’s architectural beauties for a good cause. 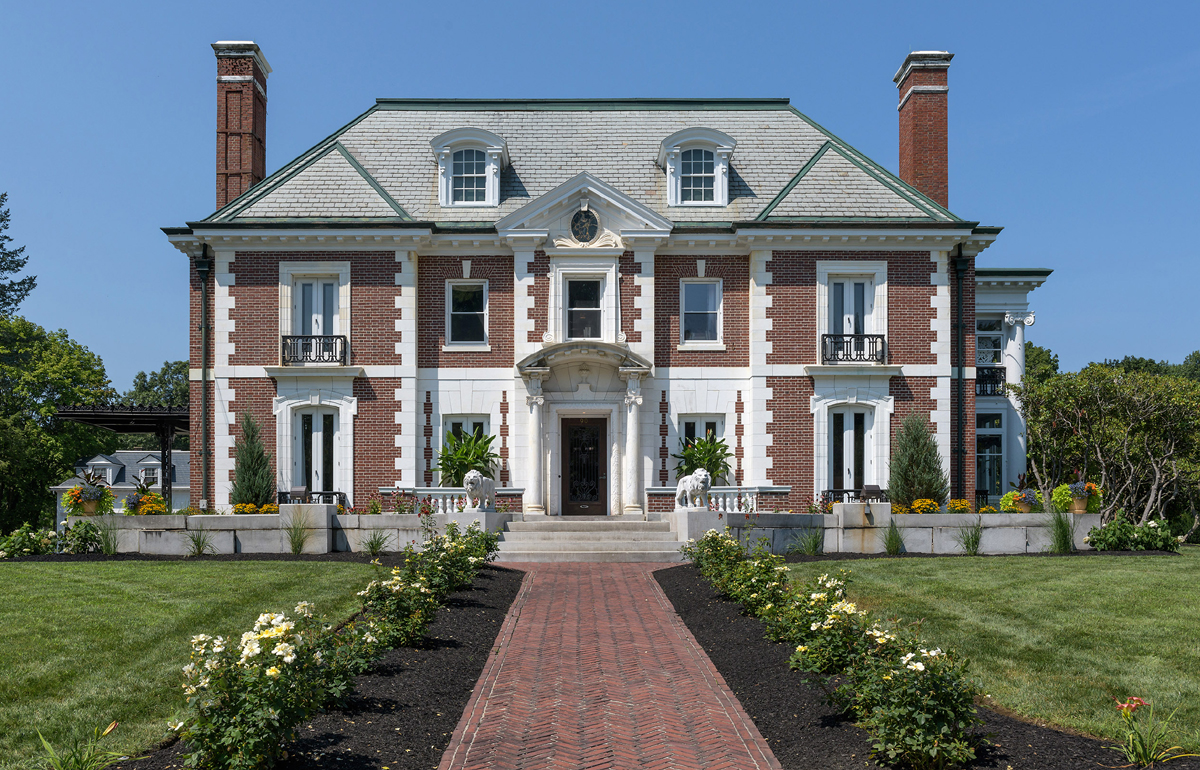 In a neighborhood filled with grand homes, the Frank E. Anderson house stands out. Built in 1906, the two-story mansion—once a cultural touchstone in the city—is a beautiful example of Beaux Art architecture in Nashua’s North End. Last summer, the home—now owned by Thomas More College of Liberal Arts—was briefly back in the public eye; this time as a designer show house benefitting Community Hospice House in Merrimack.

“We brought the house back to its original story as a private home,” says Tina Andrade, director of development for Home Health and Hospice Care in Merrimack. “The house maintains many historic details, but our designers re-imagined it for a modern family.”

The marble and red-brick mansion, built for entertaining, was a fitting residence for Anderson, a shoe-manufacturing magnate, and his wife Ella. In 1925, the house was sold to New Hampshire’s seventy-fourth governor, Francis Murphy, a successful businessman. It was later home of the Manchester Convent of the Sisters of Mercy, then became a private girls’ high school; three years ago, it was purchased by Thomas More College.

The house retains its distinctive architectural elements throughout: carved decorative moldings, sleek mahogany cabinetry and wall trim, as well as fascinating, original electric light fixtures that were among the first in Nashua in the early twentieth century.

The grand main foyer and staircase were designed by Meredith Bohn, of Meredith Bohn Interior Design in Hollis, who re-created the spaces as grand reception and entrance points.

Re-imagined by Meredith Bohn, of Meredith Bohn Interior Design in Hollis, the magnificent main-floor foyer brings back the space’s original purpose as a meeting and gathering space.

Off the foyer are rooms reminiscent of an era when ladies and gentlemen had separate entertainment spaces: a former ladies’ parlor and dining room on the south side of the house, and a men’s billiards room and library on the north side.

Bohn’s greatest challenge? “There were red damask-covered panels on each wall downstairs and along the grand staircase leading upstairs,” Bohn says. “It made the space appear more institutional rather than elegant. I wanted to evoke the feeling of a grand private home.” She replaced the deteriorating fabric panels with textured striped wallpaper in neutral colors, enhancing the foyer’s beautiful ceiling with its ornate, gold leaf and carved plaster trim.

Befitting the space’s use for grand receptions and musical soirees, Bohn featured a mix of antique and contemporary furnishings, using blue as an accent color in re-upholstered velvet chairs, an Empire period settee and the vintage Kerman rug.

She transformed the grand staircase at the far end of the space with drama-tic, twenty-foot-high wallpaper panels of scenes from Venice, creating a sense of being in an Italian palazzo. The abstract carpet runner on the stair evokes a watercolor with its blue, gold and white gradations. The massive Beaux Art chandelier is original to the Anderson house, as are the beautifully restored, quartersawn oak floors throughout the first and second floors.

Christian Boyer, of Boyer Interior Design in Manchester, had a clear vision for the former ladies’ parlor. “When I first saw the room, there were two pianos in the space,” he says. “I envisioned a European music room in black and white.”

The theme took on a life of its own, Boyer says. He incorporated an elegant palette of black, gray and white with gold accents throughout the space—even repainting the ceiling’s elegant, plaster flower molding and brushing it with gold paint. Fabric panels along the walls were replaced with wallpaper in an elegant sophisticated Art-Nouveau inspired design.

A focal point is the large marble fireplace, set off by original wall sconces and an elaborate gold-framed mirror. Contemporary furnishings—including smart gray mohair and leather accent chairs and a sofa—were complemented by more traditional accent tables and lamps, and tied together visually by a gray Fou-style rug.

Fitting seamlessly into the room is a rare late-nineteenth-century box grand piano, donated to Thomas More College by a show-house designer.

Frank Hodge, of F.D. Hodge Interiors in Boston, has a personal connection to the Anderson house. A Nashua native, Hodge remembers riding past the house on his way to school. “The Beaux Arts-style house was different for the area and peaked my interest in design,” he remembers. “It really was my inspiration to study architecture and design.”

or the show house, Hodge focused on the library. The elegant, masculine room—with its russet, beige and chocolate brown palette— retains all its original mahogany details, including moldings and trim; built-in leaded glass cabinets; and a majestic fireplace, framed by elaborately carved effigies of the Greek god Pan.

Hodge designed the room with a mix of antique and contemporary furnishings and accessories that created a comfortably formal look. He used Venetian plaster on the walls and painted the ceiling, leaving the plaster ceiling ornamentation intact. The room has two distinct seating areas flanking the fireplace. Furniture placement allows the fireplace to be the focal point of the room with an uninterrupted view from the foyer.

Among the outstanding pieces in the room were an elaborate Italian mirror over the fireplace, along with a rare eighteenth-century Venetian grotto chair, one of many unexpected pieces Hodge incorporated from his personal collection. 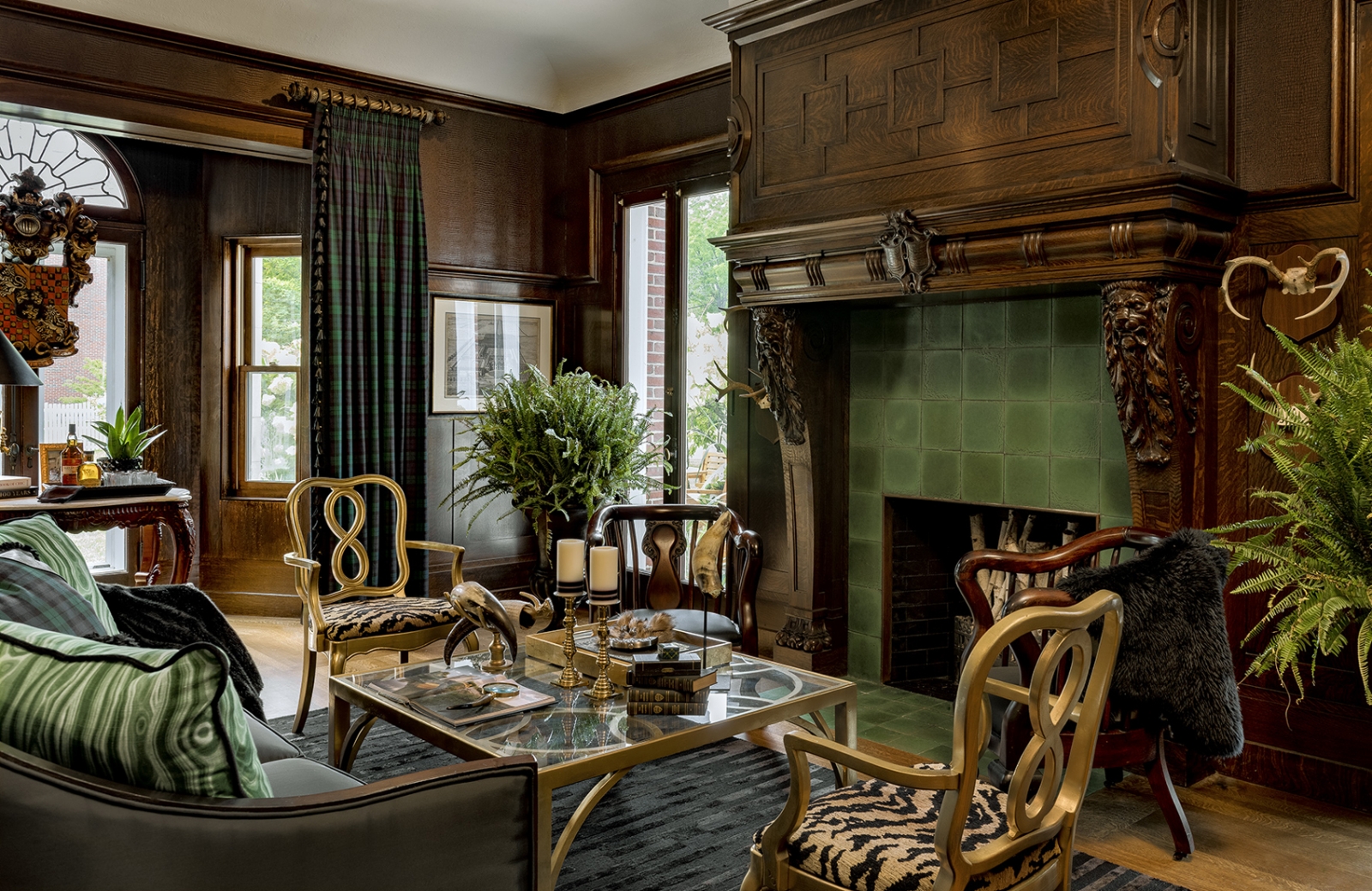 Inspired by the space’s original use as a billiards room, Michaele Boehm and Kacey Graham, of Boehm Graham Interior Design in Bedford, created a Scotch lair.

A mahogany fireplace with carved lion heads and a family plaid inspired mother-daughter design duo Michaele Boehm and Kacey Graham, of Boehm Graham Interior Design in Bedford, in their work with the men’s Scotch lair in the home’s former billiards room.

“The mahogany paneling is beautiful, and the bones of the room are spectacular,” Graham says. “The fireplace is a showstopper.” The massive, mahogany fireplace with its original green tile front is the focal point of the room.

The designers wanted to keep the room symmetrical, with two antique mahogany chairs and re-upholstered armchairs flanking the center coffee table and ferns on either side of the fireplace.

Boehm and Graham also added many fun, family details to the room. Inspired by the Graham family’s Black Watch-style Scottish plaid, the designers incorporated other images of heraldry and a sense of classic style in the space, including window treatments made from Graham plaid with kilt-like details at the top and hanging a family crest in the window over a marble-topped table.

A rug from PRG Rugs added a modern touch to the room as did a large, Asian-inspired sideboard. Pops of gold added elegance to the space. “You can almost hear the men pouring scotch, smoking and talking,” Graham says.

Unique details in the Scotch lair include curtains made from the Graham family plaid (left), a family crest in the window (middle), and a collection of hunting and Scottish-inspired decorative pieces—including a fur sporran—on the coffee table (right). 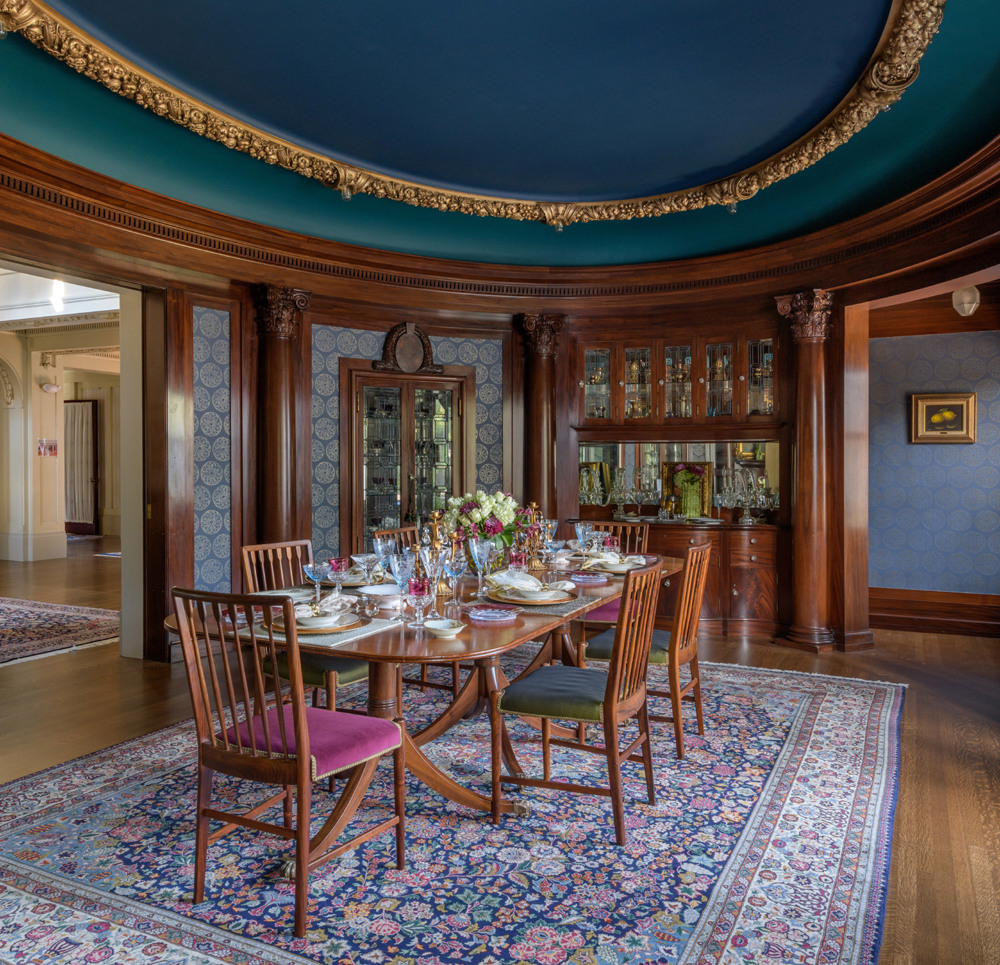 Bohn also worked on the dining room, where she applied more design magic. This is an oval-shaped room with curved walls, a dramatic domed ceiling as well as stunning mahogany and curved, built-in wood cabinetry with leaded glass.

Peter Brousseau, of Integrity Painting and Wallpaper in Merrimack, gilded the fruit carving on the ceiling, which is ringed by original lighting. The walls are papered in navy and gold; the ceiling is painted teal green and deep blue with gold accents. When the lights are on, the room has the ambiance of a glittering jewel box. The window treatments are blue and green with a wash of gold, and trimmed with velvet banding and rosettes.

“I always try to contrast the historical aspects of a room with what would be there today,” Bohn says. To offset the room’s glamour, she used a Sheraton-style double pedestal dining table and chairs. A hand-woven Indian rug fit exactly within the oval fitted-wood floor. 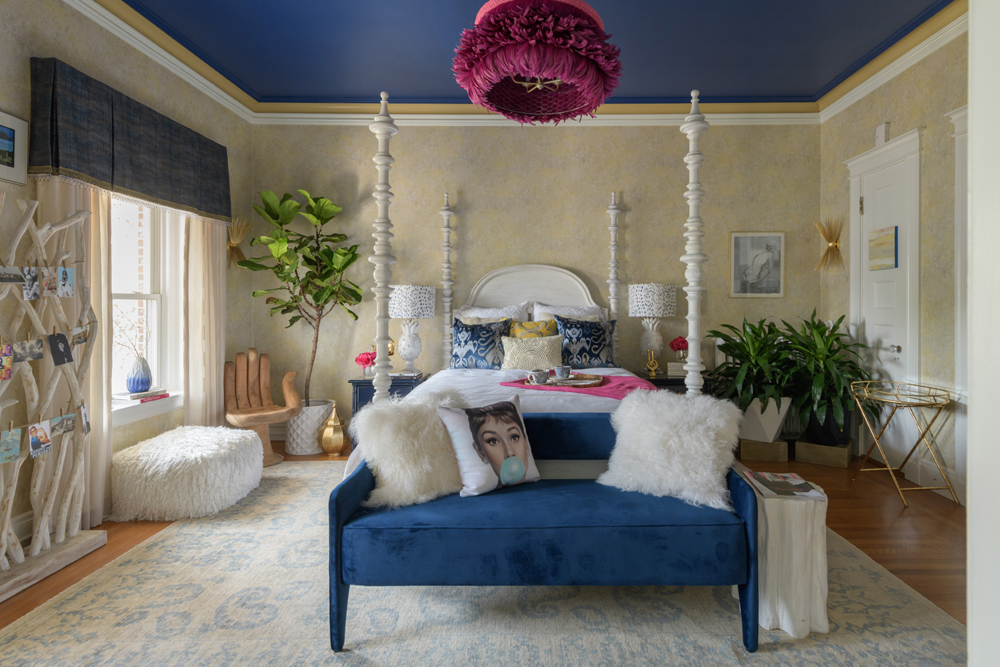 Honoring the show house’s Beaux Arts design, Dianna Normanton, of Dianna Normanton Interior Design in Litchfield, created a girl’s bedroom that combines witty style with classic details. “I wanted to keep some traditional elements in the furnishings to honor the period of the house, but designed the room for a young woman who would use the room in 2018,” she says.

The room was brightened with subtly shaded yellow and blue wallpaper. Normanton added drama by painting the high ceiling indigo blue and using gold paint to highlight the cove molding; the crowning touch was a whimsical fuchsia ostrich-feather chandelier. The room’s largest piece of furniture was a white four-poster bed—with unique turnings on the posters—piled high with pillows. Other fun details included a hand-shaped chair, a blue velvet settee and fuzzy ottoman from Wayfair.com, and a large stick sculpture from HomeGoods that Normanton used to highlight photos and postcards. 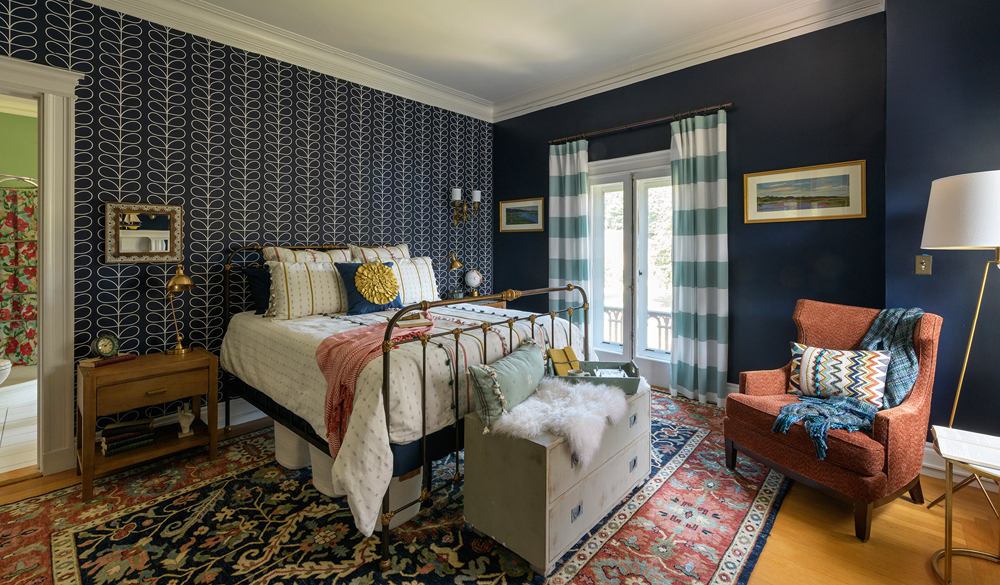 Marcia Fletcher, of Marcia Fletcher Interior Design, LLC in Concord, transformed this bedroom with a mix of furnishings and a large wall graphic behind the bed.

Gray chest: Remember This Antiques and Collectibles in Amherst • (603) 883-0051
rememberthisantiques.com

Marcia Fletcher, of Marcia Fletcher Interior Design, LLC in Concord, transformed an upstairs bedroom into a cool retreat. On the southeast corner of the house, this room was once a gentleman’s bedroom, with a Juliet balcony overlooking the front yard and plenty of sunlight.

Fletcher was especially inspired by the room’s original light fixtures. “All the wall sconces in the room and the ceiling fixture have the same acorn design elements,” Fletcher says. “They’re gorgeous.”

Her bold, navy walls, accented by the white trim and ceiling, are historical colors taken from a hand-knotted Indian rug she selected for the room. The accent wall behind the bed isn’t wallpaper: it’s a vinyl wall graphic. Fletcher found a pattern she liked on Etsy.com and went to NH Print and Mail to reproduce and install it. “It’s like a big sticker,” she says.

Furnishings, accessories and window treatments in the space were layered and selected to mimic colors and shapes in the room. The wrought-iron bed added a nostalgic touch that tied back to the light fixtures. 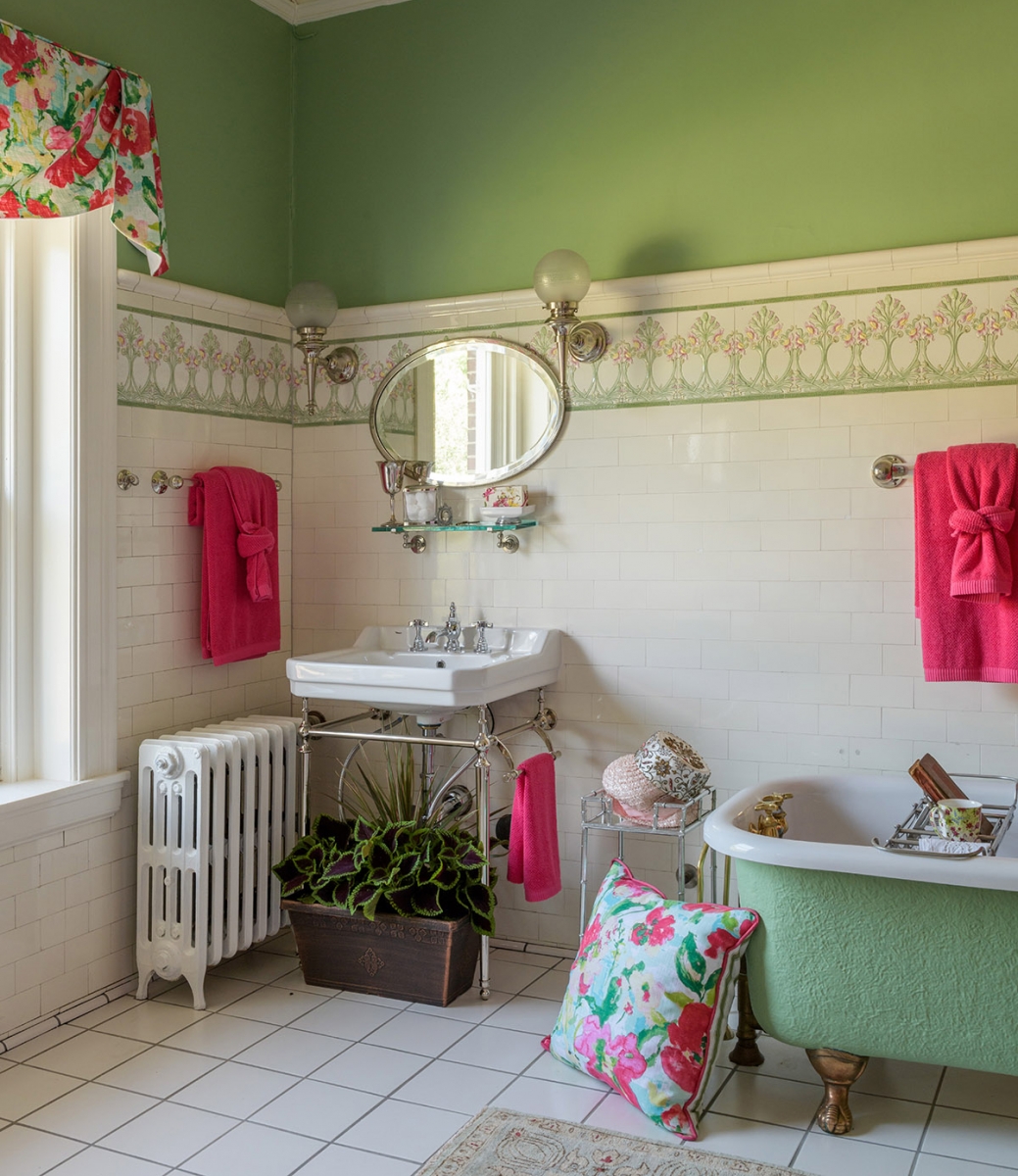 Off the bedroom, a cheerfully re-imagined master bath retains many of its original details. Melissa Swidler, of SWI Designs, LLC in Nashua, wanted to enhance the room’s original Art Nouveau-style pink and green accent wall tile. “I wanted to respect the home’s integrity,” Swidler says

“I was intentionally reserved with the design so it wouldn’t take away from the bathroom’s period elements.” The walls, ceilings and
trim were originally creamy white; Swidler painted the walls and original claw-foot bathtub a sunny green, punching up the wall tile.

In one corner of the room is a birdcage, or needle, shower. An innovation when it was installed, the shower is designed to provide massaging bursts of water from each rib. Swidler polished the shower and added a cheerful floral shower curtain, as well as matching fabric panels on the windows.

Original oval glass mirrors hang over each pedestal sink. Swidler even found frosted glass globes for the light fixtures on either side of the sink, with key patterns that echo similar patterns on the wall tile. The light fixtures and mirrors survived a 1980-era renovation, when the original sinks were replaced with vanities; pedestal sinks return the bathroom to its original look.

Beth Kane, of Beth Kane Designs in Nashua, created a relaxed outdoor setting on the back terrace.

The Anderson house’s outdoor landscape was as spectacular as its interior.

On the back terrace, Beth Kane, of Beth Kane Designs in Nashua, created a relaxing seating area with a beechwood table and chairs as well as oversized pillows, covered in a bright leaf print. In cement urns near the side entrance, she planted palm trees and variegated grasses. Other plantings included elephant ear, fern and different types of grasses, complemented by blue silk delphinium.