A grand spring awakening at the Grout Hill Farm

A master plantsman creates an extraordinary landscape on old farmland at home in Acworth, NH.

Spring arrives early at Grout Hill Farm in Acworth, home of landscape designer Kristian Fenderson and his partner Alston Barrett. In mid-March, a collection of witch hazels (Hamamelis x intermedia)— including the deep yellow ‘Arnold’s Promise’, pale yellow ‘Pallida’, and coppery red ‘Jelena’ and ‘Ruby Glow’—begin to bloom. The earliest plants to emerge are golden-yellow winter aconite (Eranthis hymenalis); sky-blue hepatica (H. transylvanica) with its large, felted leaves; and hundreds of self-propagated giant snowdrops (Galanthus elwesii). “These three plants, along with the witch hazels, are the sure first signs of spring for me,” Fenderson says.

Soon, hundreds of spring flowering bulbs naturalized in the pasture begin to poke out of the soil. The miniature daffodil ‘Peeping Tom’ with its long, golden trumpet is first to appear, followed by a succession of blooming daffodils, such as pale yellow ‘Hawera’ with its swept-back petals and ending with the poet’s narcissus ‘Actaea’, a fragrant, white heirloom variety.

Blue, white and lavender flowers of creeping phlox (Phlox stolonifera) provide a colorful groundcover and—along with the graceful, giant, white trilliums (Trillium grandiflorum), which age to a deep pink as they mature—have spread throughout the garden. “This trillium is only surpassed in beauty by the double-flowering form,” Fenderson says. “The double is spectacular!” (His trilliums came from single clumps someone gave him. “They love to be divided,” Fenderson says.) 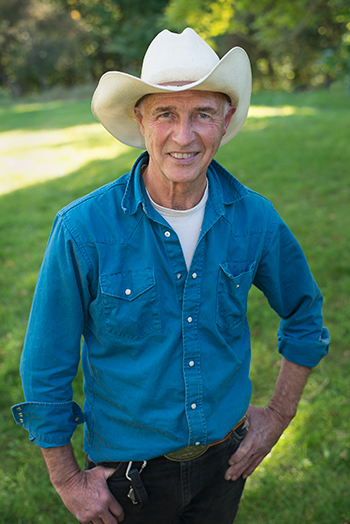 To locate Kristian Fenderson in his garden, just look for the beat up Stetson—his favorite gardening hat.

The early magnolias blossom next. Fenderson has quite a collection of them, including star magnolias (M. stellata) and (M. x loebneri). ‘Centennial’ is a double-star magnolia that was developed and named for the Arnold Arboretum’s one hundredth anniversary. ‘Centennial’ has flowers that are between three and four inches wide, each with between twenty-eight and thirty-two petals that are white with a slight pink blush. ‘Royal Star’ is another fragrant double-star, and ‘Ballerina’ also has white blossoms tinged faintly with pink. ‘Dr. Merrill’ has fragrant, strap-like white blossoms, and the later blooming ‘Leonard Messel’ has pink petals. “The magnolias self-hybridize and seed freely in the garden,” Fenderson says. “A lovely one showed up with pale pink and white peppermint striped flowers.”

The three-hundred-acre Grout Hill Farm is one of New Hampshire’s hidden gems. Located on a winding dirt road, the farm has been Barrett’s and Fenderson’s home for more than forty-five years. The house, built in the 1790s, is one of the oldest in town and belonged to one of Fenderson’s distant ancestors in the 1830s. Lovingly restored along with the 1836 barn, the house has a solid, nestled-in look. Behind the house is a large, circular stone patio that Fenderson built from the stones Barrett collected from the property. The patio is home to about 150 potted plants each summer.

At a glance, the surrounding landscape has matured to look as though it is native to the site, although that is not the case. “When we moved here, there were no plantings other than a few lilacs and an old mock orange,” Fenderson says. “The open farmland was growing up in wild apple seedlings, pasture pine and gray birch.”

Now, the well-kept pasture is home to two horses. “I don’t think I could garden without horse manure,” he says. “The blue poppies especially like the soil that has been built up using manure.”

Tibetan blue poppies, which Fenderson calls the signature plants of the garden, are just one of the rarities to be found. On closer inspection, the garden reveals itself to be the work of a master plantsman: There are the blue Aquilegia jonesii—these sub-alpine plants are native to the limestone cliffs of the Continental Divide but are successfully surviving in a raised bed that mimics alpine conditions. Kentucky lady’s slippers—which are elusive even in their native range of Virginia to Texas—grow happily along with other uncommon finds, such as pale pink Himalayan mayapple, blue wood anemones and hardy cacti. 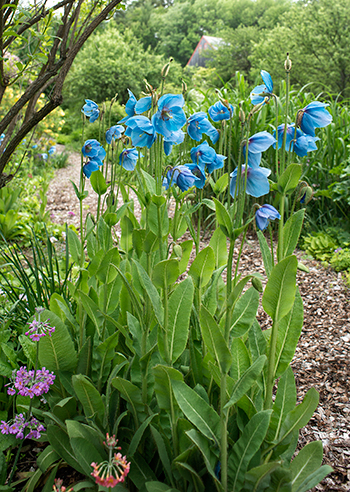 Blue Tibetan poppies are just one of the rarities to be found at Grout Hill Farm.

Specimen trees include the contorted European beech (Fagus sylvatica tortuosa). “Now that’s a tree with issues!” Fenderson says as he points out the twisted branches that loop back on themselves in a painful-looking way. Another very rare and prominent tree is a golden weeping beech (Fagus sylvatica aurea pendula). “It has been christened ‘Sarah Bernhardt’ by a dear friend for its dramatic appearance,” Fenderson laughs. There are several weeping European larches (Larix decidua pendula) lending their gracefully arching branches and fine bright green foliage to the spring landscape.

In almost every garden there are primroses. Plants in the primula family have been Fenderson’s lifelong passion, and he is an expert, having written a book about them, A Synoptic Guide to the Genus Primula. Fenderson is a member of the American Primrose Society and serves as a judge during their national show held each spring at Tower Hill Botanic Garden in Boylston Massachusetts. If you have struggled to grow primroses, you’ll be amazed by the way the plants have naturalized, many escaping their beds and taking over pathways. “I have been collecting primula species and hybrids for more than forty years and grow nearly a hundred different forms,” Fenderson says.

Golden-yellow cowslip primroses (Primula veris) and pale yellow oxlips (P. elatior) are the first primroses to show color in the spring, and they remain colorful for about six weeks. “Both oxlip and cowslip are wild European species that have naturalized throughout the garden by the hundreds,” Fenderson says.

One of Fenderson’s own selections is a garden auricula he named ‘Grout Hill Violet’. Rosy lavender and white globes of drumstick primroses (P. denticulata) thrive in the dampness of the lower garden. Blooming at the same time are the small Juliana primroses, including pink ‘Kinlough Beauty’, which Fenderson calls an all-time great. “You can’t kill it! It is extremely durable,” he says.

Pink, white and blue primula acaulis are followed by the larger flowered polyanthus crosses, including the Cowichans. “A particular favorite of mine are the deep ruby and solid navy blue Cowichans,” Fenderson says. His display of primulas continues throughout the season with many colorful cultivars of Japanese woodland primroses (P. sieboldii) and the tall, pink-and-white japonicas, culminating in July with the yellow, orange, cream and rose of the Chinese candelabra hybrids (P. x bullesiana). “The blue poppies bloom at the same time as the Chinese candelabras,” Fenderson says. “The candelabras and japonicas have naturalized to form huge colonies.”

Fenderson offers this advice for growing primroses: “I suggest a very rich soil with copious amounts of organic material (I use horse manure) incorporated in a site where adequate moisture is available during dry periods. A site with full morning sun and light afternoon shade is ideal.”

Primroses aren’t Fenderson’s only passion, though, and along with his many signature plants, there are other favorites growing in his garden. “Epimediums are my most recent fetish,” he laughs. “They are the hot plant of the decade.” Drawn by their interesting foliage, Fenderson has a couple of dozen varieties. Like a proud parent, he calls his fern-leaf peony his pride and joy. “It is frustratingly difficult to grow well, but it is still one of my favorites,” he says.

“One of the greatest pleasures of my garden comes from plants, both herbaceous and woody, which after more than forty years have self-seeded or otherwise naturalized into very large colonies or have appeared in delightfully unexpected places,” says Fenderson.

You may recognize many of the plants that Kristian Fenderson and Alston Barrett grow as being Cary Award winners. Named for nurseryman Ed Cary, the award has been given annually since 1997 to promote outstanding trees and shrubs for New England gardens. 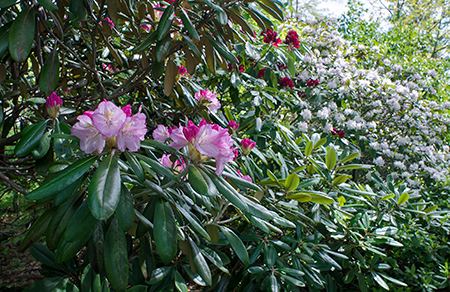 Hybrid yakushimanum rhododendron ‘Ken Janek’ is just one of the many Cary Award plants (it won in 2002) Kristian Fenderson grows in Acworth.

Nominated to the list by landscape professionals from around New England, the plants aren’t necessarily new but are superior performers that deserve to be used more in area landscapes.

“There are a lot of Cary Award winners growing in the garden,” Fenderson says. “Of course, they were here before there was a Cary Award. I am on the selection committee and help choose the plants for it.”

A few from the list growing on Grout Hill Farm are pinkshell azalea, large fothergilla, witch hazel ‘Pallida’, Kousa dogwood, climbing hydrangea, stewartia, rhododendron ‘Olga Mezitt’, and magnolias ‘Centennial’ and ‘Leonard Messel’. In this way, Grout Hill Farm is not only a pleasure to behold but also a living laboratory.

For more information about the Cary Award and a complete list of the plants, visit caryaward.com.