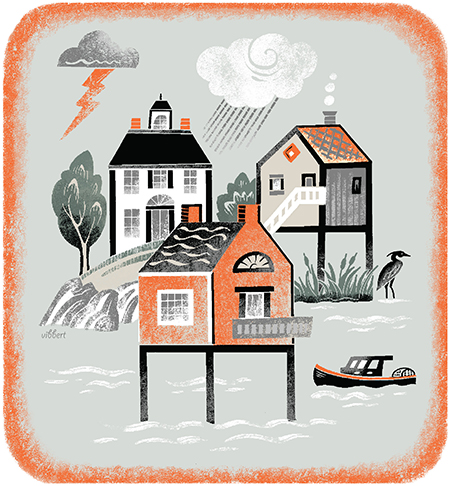 Last August as I was driving home, I got caught in a ferocious thunderstorm. The rain was falling so heavily, I could scarcely find a road I’ve taken for decades. The thunder was right overhead—it felt like you were inside each boom—the sky cracking open with blue-white light and bolts of lightning shooting into the forest. A tornado warning sent people scrambling to their basements with only a childhood memory of The Wizard of Oz to guide them. As I neared town, water was flooding downhill across the road. It was like fording a stream. I arrived at this new crossing just as the fire department had been dispatched.

More than 4 inches of rain fell in about an hour and a half. Two big thunderstorms had met, and they were then joined by a third storm, said the National Weather Service. We were spared the tornadoes. It was the most frightening thunderstorm I’ve ever seen.

The storm left broken roads all over town. One of the main roads south was cut into two when a stone culvert washed out, leaving a surprising canyon. The road would be closed for two and a half months as the town tried to figure out how to repair it with something that can handle the “new weather.” The old culvert had served since the 1930s.

The news was even worse in neighboring towns; the main route across the region was blocked in two places with heaps of dirt and rocks.

Our road crew worked through the night to clean up, and then they faced months of repairs. The minutes of the selectboard meetings are a roster of damage: this road is “sketchy,” that one is “passable,” and this other road needs to be completely rebuilt. The list of repairs and expenses would soon fill a twenty-three-page report. Each meeting produced a new to-do list. We need more barricades and cones, said the selectboard. We’re running out of “Closed Road” signs. We need portable radios for the selectmen and -women to stay in touch with the police and fire departments. And once we get through this, we need to plan for the next emergency.

This wasn’t our first collision with the new weather. In last fifteen years or so, there have been serious floods in the region; the worst, in 2005, killed five people. And in the ice storm of December 2008, more than half of New Hampshire lost power for as long as two weeks.

The climate is changing. Now we have to change. What can we do when we’re facing a world-sized problem? There’s a way forward.

On the Seacoast, a group of citizens met to face the rising seas caused by the warming planet. The Coastal Risk and Hazards Commission worked for nearly two years—holding hearings; listening to scientists, lawmakers and planners. They produced a report in 2016, Preparing New Hampshire for Projected Storm Surge, Sea-Level Rise and Extreme Precipitation (nhcrhc.org).
It is a roadmap that’s clearly written, showing how we can exercise traditional Yankee prudence, listing what should be done starting this week and for years afterward. Among the advice: act early, respond incrementally, revisit and revise. We’ll benefit even if the future hazards are less than expected, they say.

Although it was promptly ignored by many politicians, this report is now guiding state agencies and towns as they plan for a higher sea level. Go read it. Give it fifteen minutes, and you’ll find the template for your community. Even though it is specific to the coast, this is a model for how to tackle the coming changes.

The future was supposed to arrive as a bright, shiny thing, an irresistible newness, not with thunder, lightning and flooding, but here we are.