A Haven for the Long Haul

This comfortable and stylish home’s design can accommodate its homeowner now and as he ages. 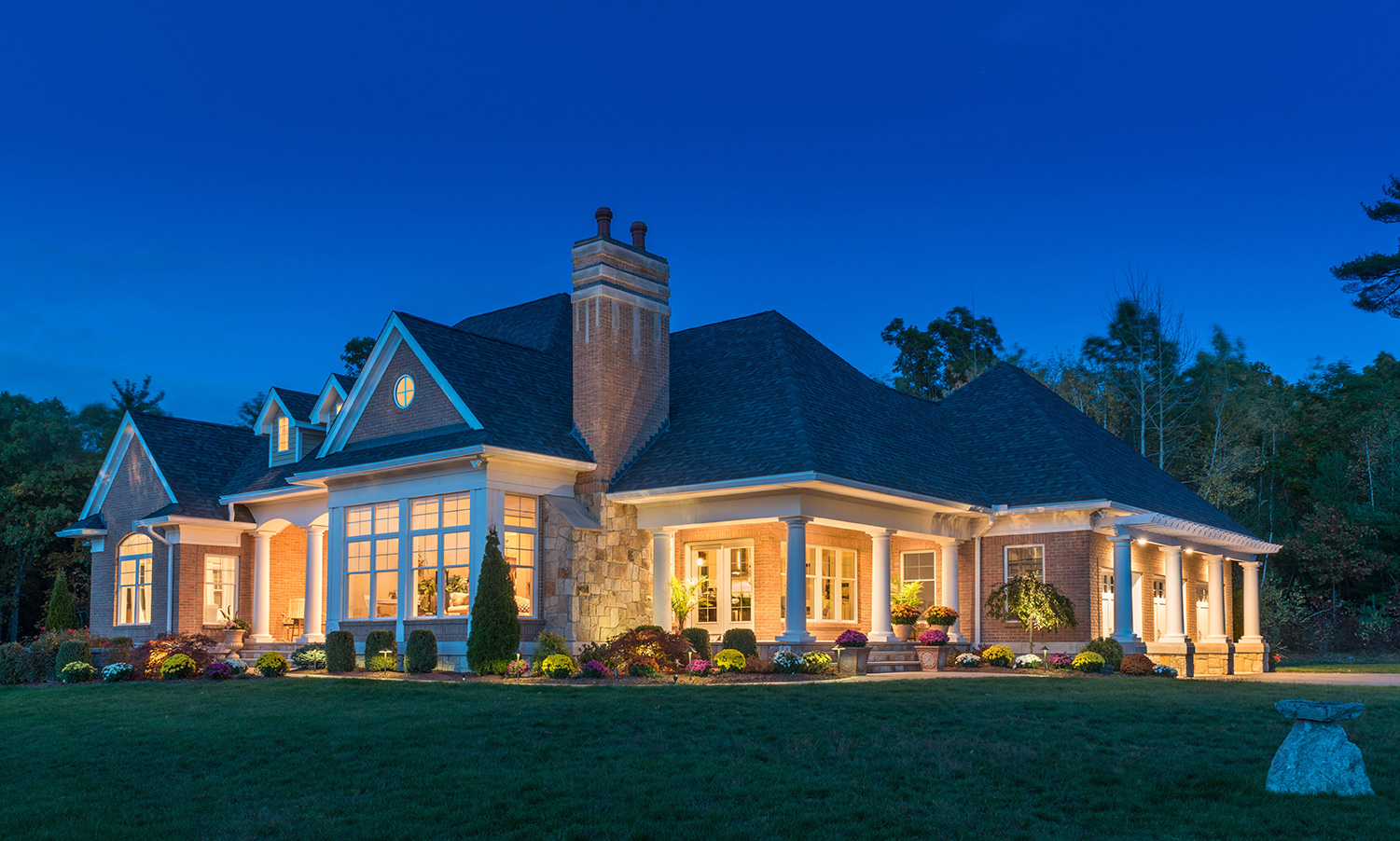 Well-designed lighting lends a warm glow at dusk to this New Hampshire home. The gables, round windows, roofline and chimney make this 2,400-square-foot, single-story home appear as if it has a second level.

The best vacations must end, but one southern New Hampshire homeowner, his builder and design team figured out how to re-create a relaxed, spa-like setting at home.

The home is a custom brick-and-stone ranch reminiscent of a European villa, with 2,400 square feet of living space on one level (plus a finished basement) and spectacular mountain views on a four-acre lot with plenty of birds and wildlife. The 180-degree views and an opportunity to acquire the land near his existing home led the homeowner to purchase this gem of a lot and then build a home to accommodate his active lifestyle and retirement years.

Windham-based builder Phil LoChiatto, owner of White Water Mountain Design and Development, worked with the homeowner to modify plans he had previously purchased. The homeowner’s friend, professional space planner and architectural designer Jacqualine Kendrick, of Jacqualine J. Kendrick Designs in Rockland, Massachusetts, offered to take
a look at the blueprints and make some suggestions.

“Jacqualine said, ‘You’ve always helped my husband and me, and now I want to help you build your home,’” the homeowner says. “It was like a gift from God.”

The home is situated to provide views of its beautiful, natural surroundings and has large windows in almost every room.

Thus, a design dream team trio was born. Kendrick says the three worked so well together that they were able to make decisions on all the finish materials for the project, from conception to completion. “It saved valuable time and avoided costly mistakes,” she says.

“Every detail was thought out,” the homeowner says. “There’s not one mistake in the house and not one regret in any of the choices.”

Kendrick says the homeowner wanted a space that fit his lifestyle and personal preferences: a home with form, function and comfort. And within six months—on time and on budget—that is what he got.

The home includes a master bedroom suite; a spa-inspired bathroom and a thirty-six-square-foot steam shower; built-in dressers and closets for shoe and clothing storage; a guest bedroom and bath; and an open-concept kitchen area that opens to a living room/den with a sixteen-foot cathedral ceiling and stone fireplace. Kendrick designed all the cabinetry, built-ins and dressers throughout—this type of work is one of her specialties. Other luxurious features include a hot tub outside the master-suite deck, a three-car garage with direct access to the basement and an outdoor stone patio for entertaining.

LoChiatto says the objective for this home was to maximize ease of living. The homeowner—an avid golfer, birdwatcher and fitness buff with a hectic business schedule—wanted a place he could come home to and decompress. “He wants to come home and feel like he’s at a spa or a hotel,” LoChiatto says.

The views drove the layout of the house. As a result, the landscape, sunsets and sunrises can be enjoyed from the large windows in every room. “The house takes considerable advantage of its location—there are incredible views to the west,” LoChiatto says.

Kendrick says the project was exceptional due to its setting: stunning views and abundance of light from dawn to dusk. “We drove up in the snow to see the site,” she says about her first visit. “What a perfect location. The footprint of the house fit perfectly.”

The homeowner credits Kendrick and LoChiatto for reconfiguring the interior layout from the original blueprints he had purchased separately. Modifications included relocating the master suite to the front of the home to capture the mountain views and aligning the front entry with the columned library and rear French door to frame views to the wooded back yard. The laundry room was also moved, so it wasn’t the first room seen when entering from the back door.

The home is trussed—meaning all the weight is on the exterior walls with no interior load-bearing walls, LoChiatto says. This architectural style allows for open space in the kitchen and living room, and that “ease of living” connectivity that drove the design.

“The truss construction allowed me the flexibility in the design phase to move interior walls,” Kendrick says. “And the one level, open-plan concept with the amazing amount of windows brought so much natural light into the home, which for a designer is a luxury.”

With more and more homeowners building houses that can accommodate them as they age, Kendrick says features such as first-floor master suites; wide, accessible doorways; lever handles; raised power outlets; and other safety features allow people to stay in their homes longer.

The few doorways in this home have either low or no thresholds, and are wider than average—enough to accommodate a walker or a wheelchair.

Attention to detail didn’t end indoors. The exterior of the home at the front gable features a round window, which is lit with fiber-optic cables. The window gives the appearance of the home having a second level. The dormers to the attic are also illuminated at night.

“The roof line is enormous,” LoChiatto says. “Adding the dormers in front and illuminating the round gable window bring the scale of the home down to a comfortable level.”

The landscape features a birdbath made to look like an ancient stone sundial, which actually doubles as a vent pipe cover. Its functional beauty attracts all kinds of feathered friends.

“The birds use it every day,” the homeowner says. “They come in and flutter, flash and drink right in the middle of the yard where you can see them—it’s beautiful.” The homeowner has worked for many years to rejuvenate the near-extinct Eastern bluebird population in southern New Hampshire. He has built nesting boxes for the birds at his and friends’ homes. 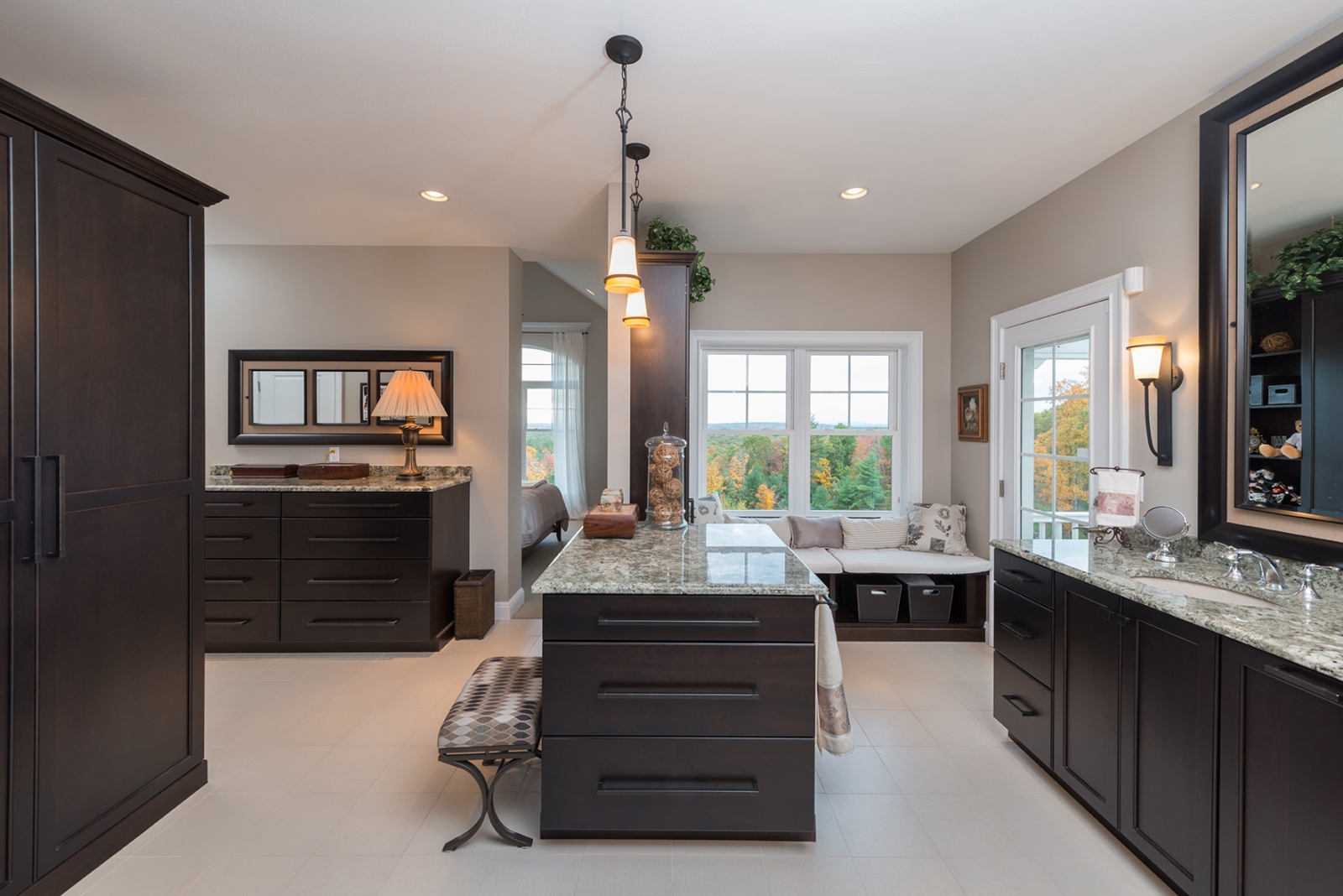 The large spa-like bathroom in the master suite connects to the dressing area. Custom, built-in mahogany cabinetry in an espresso tone offers plenty of storage. A door to the right opens to the deck with a hot tub.

Now that the home is complete, LoChiatto looks back with pride and gratitude for the enduring friendship that resulted. “I’m very proud of the quality of the project,” he says. “I think what makes me happiest, though, is how much [the homeowner] loves it and how happy he is at home.”

The home met—if not exceeded—the homeowner’s expectations. “Every day I wake up and feel like I’m on vacation,” he says. “It has been four years since the house was finished, and I’m just as enthused about my home today as the day I moved in.”