A High-Rise Space For Entertaining

The focal point of Harry Harkins and John Garger’s Ogunquit, Maine, condominium is the view: a sweeping vista encompassing Ogunquit Beach, the Atlantic Ocean, a rocky shoreline and the nearby Marginal Way. A close second to the view is the couple’s airy, modern kitchen, which perfectly suits their laid-back hospitality. “Harry and John entertain a lot of family and friends,” says Mark Gillies, senior designer with Mari Woods Kitchen Bath Home in Portsmouth. “They wanted a kitchen that serves as a gathering space—a place to enjoy a pre-dinner cocktail or re-group before heading out to enjoy Ogunquit’s restaurants and scenic spots.”

What Makes These Spaces Unique

Sconces in guest bathroom by Timbale from Norwell Lighting
(800) 822-2831
www.norwellinc.com

The two-level condominium occupies the top floor of its building, which was once a hotel. Harkins—one of the earliest residents of the repurposed building—purchased the unit in 1989. “It’s an unusual layout: two levels with three balconies,” he says. He made minimal changes to the unit until after getting married—he and Garger own another home in Fort Lauderdale, Florida—when he decided to update the kitchen and two bathrooms.

A cherry hutch, a family heirloom, was Gillies’ design inspiration for the kitchen. He wanted to create a space that didn’t compete with the room’s ocean views. Anchoring the space is a central island, crafted from maple and cherry, that incorporates a hand-finished, cold-rolled steel table for four. The table—directly across from a large, mirrored liquor cabinet and bar area—enables visitors to gather in the kitchen without interfering with the food preparation areas. Gillies spent two weeks finishing the table. “I wanted it to contrast with the kitchen’s straight lines,” he says. The result is an organic piece that looks more like sculpture than a table. Custom-built wall cabinets and open shelving provide ample storage space. State-of-the-art appliances—including the electric range, refrigerator, microwave and warming oven—were selected for convenience and function.

Form also follows function in the remodeled first-floor and master bathrooms. Both spaces were completely gutted; Gillies redesigned the spaces without moving plumbing. Curbless showers—tiled in marble in the master bath and tiled in porcelain in the guest bath—create more room for movement. The countertops in the guest bath are a quartzlike material called Caesarstone (also the countertop material used in the kitchen); the master bath has sleek marble countertops.

Harkins is thrilled with the results. “I’m amazed at how Mark was able to carve out space without changing the footprint of the bathroom and create roomier shower stalls,” he says. 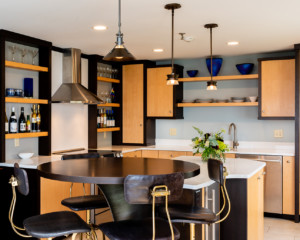 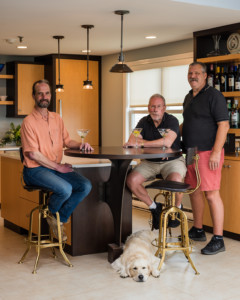 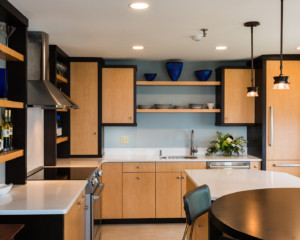 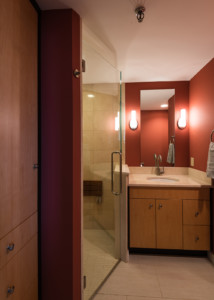