New England designers showcased their talents at The Fells Historic Estate & Gardens last holiday season and will do so again in November. 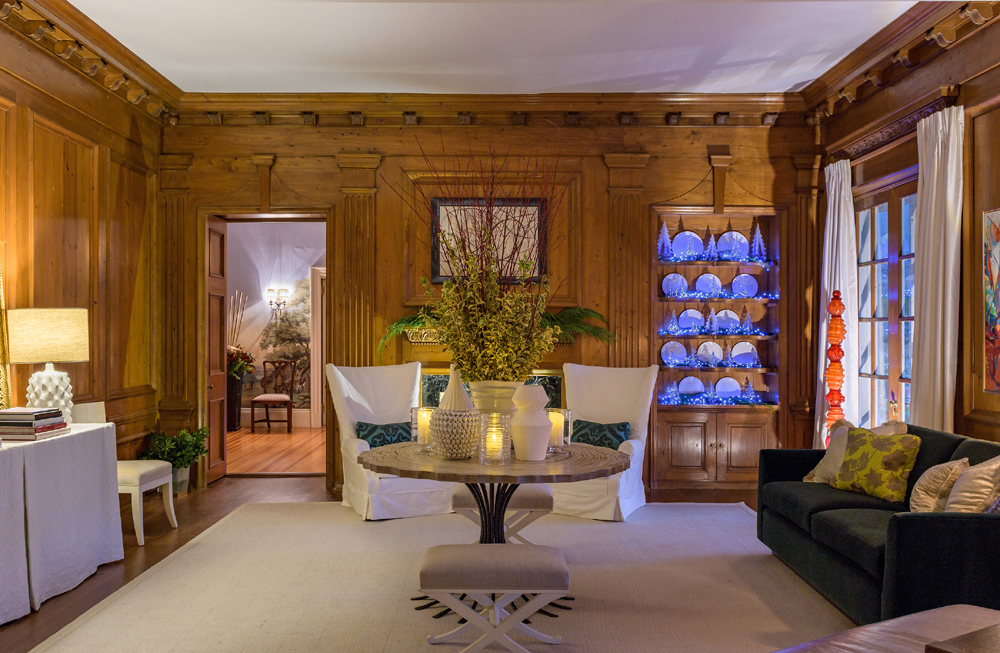 The Fells Historic Estate & Gardens in Newbury is one of the jewels of New Hampshire. In the late 1800s, author and statesman John Milton Hay—whose storied career included serving as a private secretary to Abraham Lincoln, as an ambassador to Great Britain, and finally as U.S. secretary of state under William McKinley and Theodore Roosevelt—began building on land in the Lake Sunapee region. In 1905, Hay passed away and his son, the archeologist Clarence Hay, inherited the estate. Clarence and his wife Alice eventually transformed the original cottages into a Colonial Revival-inspired home with extensive formal gardens. In 1987, Clarence’s widow Alice passed away, and the property became the John Hay National Wildlife Refuge (named after Clarence and Alice’s son John Hay, an accomplished natural history writer). About ten years, later, The Fells nonprofit organization was created to preserve the property and operate programs for public benefit.

Today, visitors to The Fells can view the stately home and beautiful gardens that once belonged to the Hays. The house and grounds are also host to various art exhibits, workshops and special programs. One such program took place last November, when The Fells hosted Christmas at The Fells, a designer show house. In early November, most of the rooms in the historic estate were transformed to demonstrate the individual talents of the more than twenty professional interior designers, floral artists, decorators and talented volunteers. This year, designers will again work their magic—see the sidebar on page 44 for details. 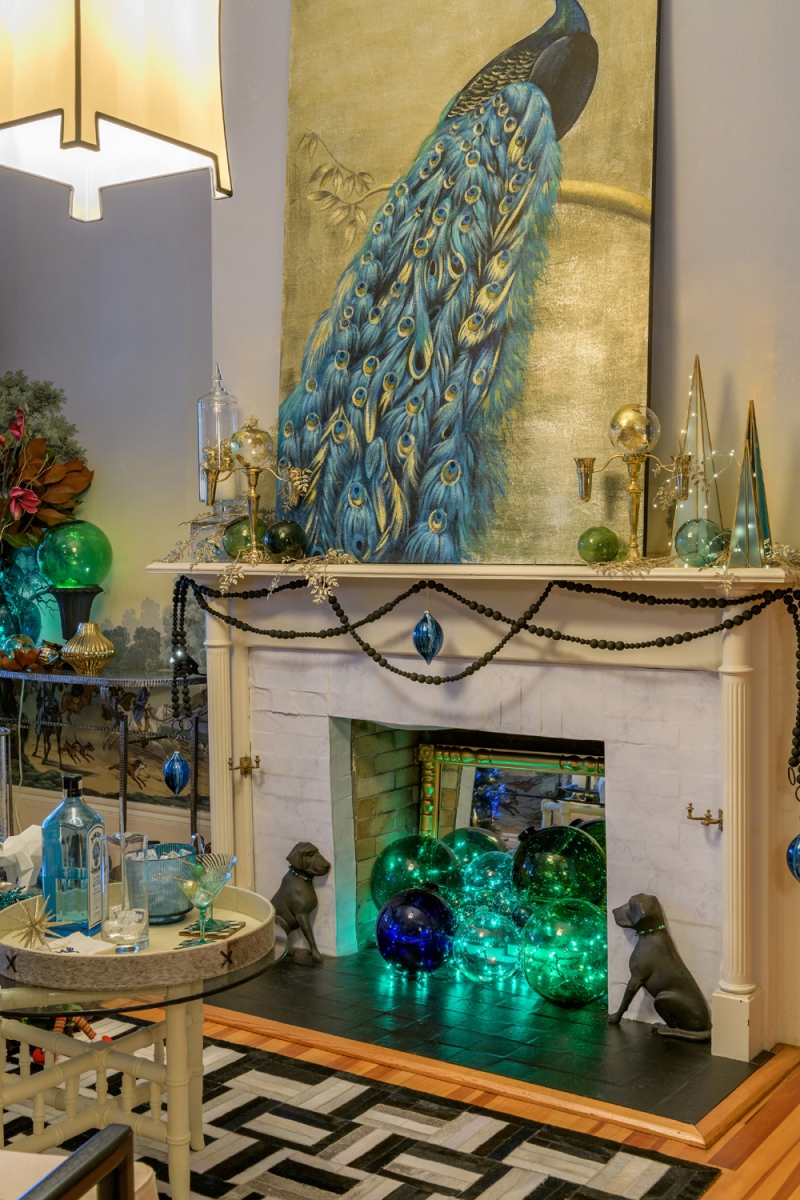 Liz Hause, of Liz Hause Interior Design in New London, based her “Hollywood Regency” design for the south hallway around a peacock painting she discovered.

The room designs ranged from traditional to whimsical, all with the connecting theme of Christmas cheer. The stately house provided a surprisingly flexible palette for the range of designer talents. “The show house was just stunning,” says Susan Warren, executive director of The Fells. “We had such a wide variety of talent, and the house seemed to embrace a decorator’s style no matter what space they took.”

The Fells’ own landscape director, Michelle Martinat, designed the Pebble Court (the welcoming visitors’ entryway to the house) with an archway constructed out of bare branches of different sizes and textures, capped by a wreath hung high over the doorway. Warren decorated the dining room, which served as a café for visitors, with a Williamsburg theme, including magnolia leaves and other greens, and fruit such as dwarf pears and lady apples.

On the first floor of the house, one of the most striking transformations was the library, a handsome room that looks out onto the terrace. Jane Prophet, of Absolutely Fabulous Home Staging in New London, used red and green books to create holiday designs, including a “Christmas tree” of artfully stacked green books festooned with lights.

The panel room is a showstopper year-round—a living room of richly polished wood with columns, corbels and other fine details. Designer Paula Daher, of Daher Interior Design in Boston, brightened the room with white furnishings, including a rug and two wing chairs. To update the setting, she used art from the Sunne Savage Gallery in Winchester, Massachusetts, and glassware from Simon Pearce in Boston. She also incorporated pops of bold color, such as the emerald-green couch and an orange pillar sculpture made of glass. “I wanted a modern take on a traditional room” she says.

The second floor landing, decorated by Amy Rothe, of Sage and Twine in Contoocook, featured all-white furnishings (some distressed) set off by simple greenery, including three wreathes hung from long ribbons in the three-paneled window. A “window mirror” with mullions helped to visually expand the space.

Left: The second floor hallway with its stunning view of Lake Sunapee, celebrated The Teddy Bears’ Christmas, as interpreted by volunteers Nell Leach and Linda Ewing of New London.

Right: Standing on the north hallway and staircase decorated by Pellettieri Associates of Warner, are, from left, the 2017 and 2018 show house chair Connie McElwee, 2017 co-chair Barbara Wheaton and 2017 co-chair Liz Hause.

One of the delights of this holiday house was that many of the connecting spaces and little rooms—halls, landings, closets and bathrooms— were designed for the holidays. For example, the south hallway, by Liz Hause of Liz Hause Interior Design in New London (also a 2017 co-chair), was a fun, eclectic mix that included a black and white cowhide rug, a blue Christmas tree, a blue and gold peacock painting over the mantel, and a “bear rug.” Says Hause, “My inspiration was a ‘Hollywood Regency’ type of feel.” Connecting the first and second floors, the North Hallway and Staircase were transformed by Pellettieri Associates of Warner with a tall, narrow tree with gold trimmings and lights, set off by gold ribbon wrapped around the staircase banister and rustic rattan decorations, including a deer.

Upstairs, The Fells bedrooms also gave many designers a chance to shine. One of the year- round highlights of the house is a bedroom where President Theodore Roosevelt slept. This was decorated for the show house by Shannon Secore, of 3 on Main in Contoo-cook, who used white decorations and greenery to complement the traditional furnishings in the room, including the four-poster bed.

A “blue” bedroom and bathroom, designed by Jill Kathan, of Kathan Gardens Garden Center and Gift Shop in Newport, has white wallpaper spattered with blue butterflies, twin arched doorways and two four-poster beds. Kathan envisioned a children’s room and used decorations designed to appeal to visiting youngsters, including a woodland scene with gnomes in the fireplace and a metal Merry Christmas banner over the hearth.

The simple nanny’s room has, strangely enough, the best view in the house, with lake and mountains visible through the window. Robin Atwood and her daughter Dara Gove, of Forest, Cone and Evergreen in Wilmot, used a cheerful red bed covering, netting and white lights on the headboard, and red and crystal decorations on the tree. “We wanted a traditional and simple look,” Atwood says. “A friend loaned us that nice, red quilt, which gave us the look we wanted.”

The pink bedroom, designed by Kaitlin Primeau of Company C in Concord, was originally a second-floor nursery but was designed for the show house as “a contemporary take on a winter wonderland,” according to the show-house program.

A holiday week (and a half)

The festive fundraiser for The Fells nonprofit organization also included a preview gala; a holiday boutique with wares from one hundred regional artisans; a café; a ladies’ night with chocolate and sparkling wine; a tree raffle; and a wreath-making and decorating class.

If you happened to miss the 2017 holiday show house, you can catch the 2018 version starting the first weekend in November (see sidebar below). “This is probably one of the very first holiday events that takes place each year,” says Warren. “It seems to get people into the holiday spirit.”

Left: The chair people for Christmas at The Fells decorated Clarence Hay’s bedroom on the first floor, including this cozy writing-desk area.

Right: A blue and white-themed bedroom was decorated for children by Kathan Gardens Garden Center and Gift Shop in Newport.

Left: The bedroom where President Theodore Roosevelt slept, with its four-poster bed and sitting area near the fireplace, was decorated by 3 on Main in Contoocook.

Right: The designers for Forest, Cone and Evergreen in Wilmot used simple, traditional furnishings and decorations for the Nanny’s Room.

Left: The pink bedroom is usually the second-floor nursery, but was festooned for the holidays in “woodsy elegance,” according to the notes from its designer, Company C in Concord.

Right: Rustic white furnishings made a cheerful holiday setting designed by Sage and Twine of Contoocook for the second floor landing. 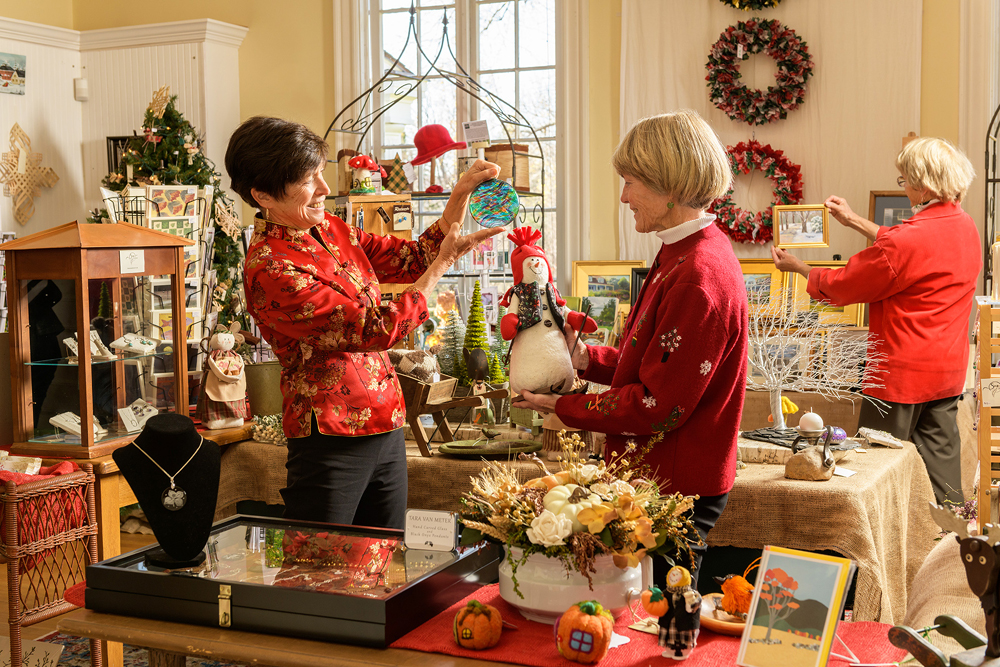 The holiday boutique was staffed by cheerful volunteers.

In Case You Missed the 2017 Designer Show House…

Get inspired this year when interior designers, floral arrangers and other talented decorators dress The Fells Main House to the nines for the holidays. Visitors can also enjoy lunch in the Dining Room Café and shop for presents by regional artisans at the Holiday Gift Boutique. The show house runs Saturday, November 3, until Sunday, November 11; hours are from 10 a.m. until 4 p.m. Tickets are $25 for adults and $8 for children over age 5; children under age 5 are admitted free. A special preview gala takes place Friday, November 2, and Ladies’ Night is Wednesday, November 7. For details, see thefells.org/view-by-date/christmas-at-the-fells.