A Home Meant To Be Theirs

After looking at more than twenty houses for sale in one month, James Aponovich and Elizabeth Johansson found the perfect home whose architectural style evoked that of their beloved Italy.

The focal point of the living room is the carved wood fireplace surround, which is flanked by two of James Aponovich’s portraits—on the left is the 1987 charcoal on paper of his daughter, Portrait of Ana Aponovich, and on the right is his 1986 pencil on paper Portrait of Elizabeth Johansson, his wife. Above the mantel is Carl Austin Hyatt’s photograph Eastport, Maine. The metal sconces behind the couch were custom made in Pienza, Italy, for Johansson and Aponovich, seen in the portrait (below, left) seated in the garden just outside the living room window.
Interior Photography by Morgan Karanasios

Moving is a lot of work, but doable when you can take time to carefully scrutinize homes on the market, plan your move, and then sort through furnishings and other belongings before packing. But when someone makes you an offer you can’t refuse and you have one month to find a new house and move? Now that’s what this writer calls a very scary deadline.

But that’s what confronted artists James Aponovich and Elizabeth Johansson in February 2013. Thanks to help from Realtor Andy Peterson, of The Petersons, Inc. in Peterborough, the following month they became the new owners of a home that looks and feels like it was custom built for them.

Knowing the perfect home when you see it 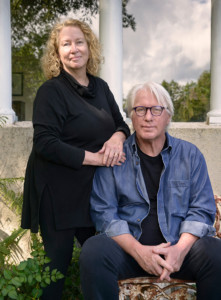 Since 2007, Aponovich and Johansson have spent several months a year—sometimes more—in a small town called Panicale, in the Italian region of Umbria. They discovered Panicale thanks to Kurt Sundstrom, senior curator at The Currier Museum of Art in Manchester, who knew about a fresco there by Italian Renaissance painter Pietro Perugino. His most famous student was Raphael; Perugino’s exquisite fresco called Martyrdom of San Sebastiano was painted in 1505 in Panicale’s San Sebastiano Church.

After enjoying a weekend dance festival and winetasting in Panicale more than a decade ago, Aponovich and Johansson were smitten with the medieval, walled town that dates back to Etruscan times. “We now go every year, and it’s become a second home,” Johansson says.

“There’s a community of people from all over the world who return each year,” Aponovich adds. “The beauty, the warmth, the food and everything wonderful about the Italian culture are all in Panicale. And Siena, Florence and Rome are easy to get to.”

This love of Italy entered Aponovich and Johansson’s stateside lives when the couple received the offer on their Hancock home with the stipulation that they move out a month later. So, they immediately began looking for another home. “We looked at twenty-five houses near Peterborough as well as on the Seacoast where our daughter lives,” Johansson says. 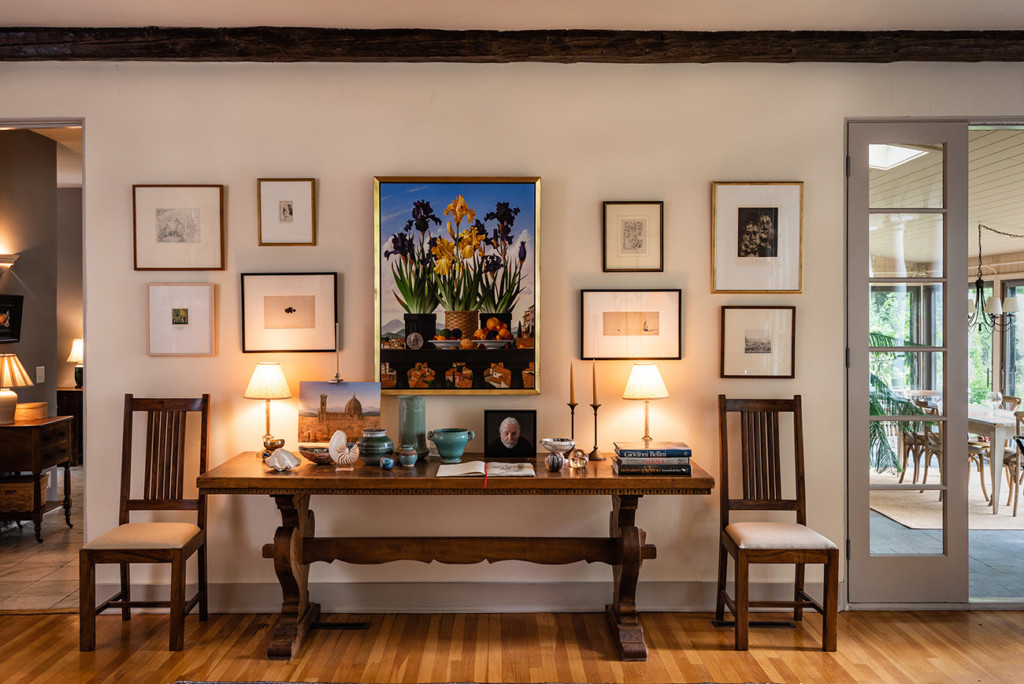 The Provençal trestle table in the living room anchors a display of James Aponovich’s drawings and paintings (Three Pots of Iris: Tuscany, an oil on canvas, was painted in 2008; the bearded irises were grown in Aponovich and Johansson’s garden, and the landscape is Barga in Tuscany) as well as other sketches, prints, small paintings and ceramics the couple has collected. Aponovich also painted View of Florence and Portrait of Peter, both oils on the table.

Peterson told the couple that he had “a nice Mediterranean” to show them in Peterborough. The home included nearly fourteen acres, and from its terrace, one can see the Pack Monadnock range in the east with a peek-a-boo view of Mount Monadnock. What made the home unusual was its Tuscan-inspired architectural design—“you don’t see many of these in New England,” Peterson says.

The home was built in 1953 by Carl and Marian Keller from Boston; Carl was a Harvard College graduate and accountant who collected rare editions of Miguel de Cervantes’s Don Quixote. After his death in 1955, the home was sold to Virginia Baker; her family had founded Baker’s Chocolate. According to Peterson, Baker updated the house with additional Tuscan touches. The single-story home features a stucco exterior, Palladian windows, marble floors, interior archways and columns, a large living room fireplace and ten-foot ceilings. “The rooms’ sizes are out of the ordinary,” Peterson says. “You typically don’t see such large spaces as the nearly six-hundred-square-foot living room and the even larger sunroom. The home has more than four thousand square feet on one floor.”

Peterson says this home “is a singular property perfect for two of the finest artists in our state. It’s great that James and Elizabeth found a home that suits their lifestyle and interests in Peterborough.”

Howard Mansfield, a friend and author who lives nearby in Hancock, adds, “James and Elizabeth’s finding this house is a lucky instance, like a happy marriage or a lifelong friendship. It’s a perfect fit.”

Making themselves at home

As soon as he saw this house, Aponovich felt at home. “The light, the scale and layout of rooms, and the height of the ceiling all felt familiar to us.” The chestnut beams were brought back from Europe, as was the fireplace surround. The home was solidly built, and its construction was top-notch. Each room had buzzers, and there was a maid’s quarter in the lower level.

Being the extraordinary gardeners they are—the couple’s Hancock garden had been featured in magazine articles and books as well as on garden tours, and the colorful, luscious flowers they grow appear in both artists’ work—the first order of business was to renovate the gardens. “One was a white moonlight garden,” Johansson says. “It was overgrown, and its soil needed to be invigorated.”

The hemlock trees, which had gotten so big they covered the side of the house, were cut way up and a shade garden was put in beneath them. The couple edited, divided and added to the perennial border at the back of the house. Out back, Aponovich and Johansson pulled out four hundred burning bushes—more than six truckloads. And they restored the great lawn with its European beech, honey locust and painted shag-bark hickory trees planted in the 1950s. “The pin oaks at the house’s four corners remind me of Maxfield Parrish’s home in Cornish called The Oaks,” Aponovich says. 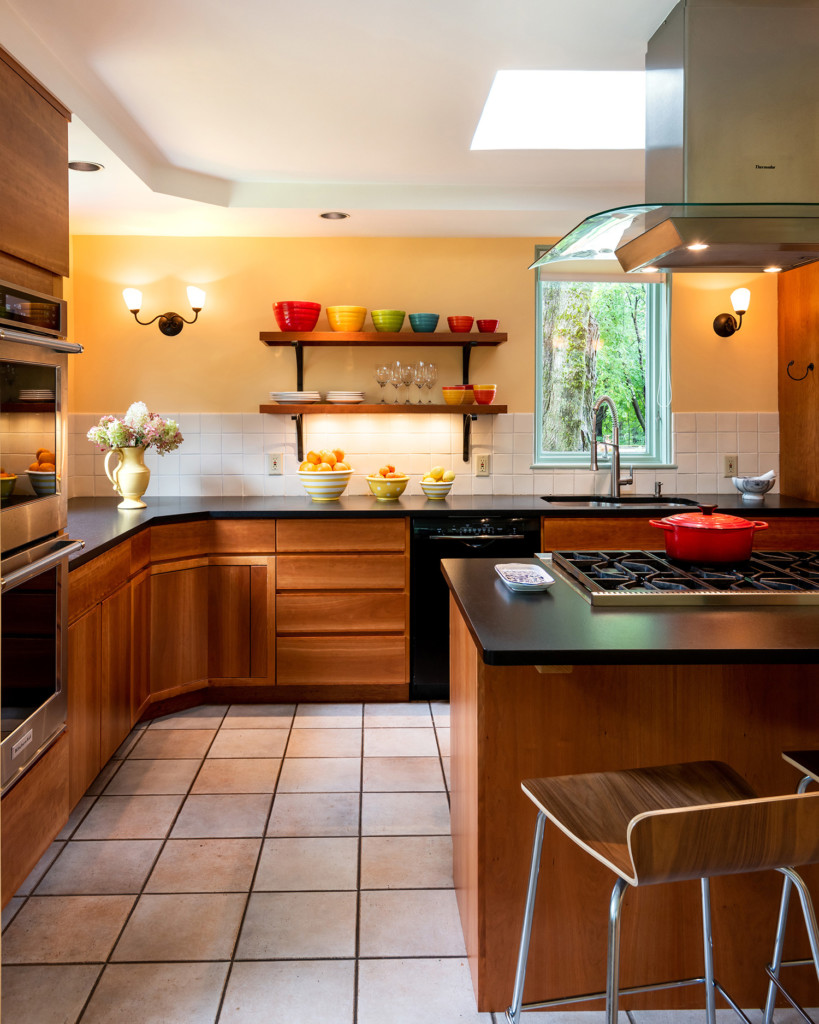 The couple renovated the kitchen in 2016. The cherry cabinets were repurposed, and a peninsula counter with a cooktop and hood was added.

The view out the large living room window, which has a colonnade similar to that of an Italian loggia, is reminiscent of what the couple had seen in a Tuscan palazzo in Pienza built by Pope Pius II, where the distant landscape was part of the view from the garden. “Here we have our garden and yard, with the longer-range view of Pack Monadnock,” Aponovich says. “This home is so well sited.” The master bedroom, library, living room and breakfast room all get morning sun, while the couple enjoys afternoon sun in their studios.

After Aponovich and Johansson rebuilt the gardens, the couple began renovating the home’s interior, including the electrical system, and had central air conditioning installed to provide climate control for their paintings. In 2016, they renovated the kitchen, with help from architectural designer and cabinetmaker David Dubois, of D.A. Dubois Woodworking and Design in Antrim. In 2018, the master bathroom was redone.

Both rooms had last been renovated in the 1980s. The kitchen only had one working burner on the cooktop and replacement parts were unavailable. Aponovich and Johansson repurposed the cherry cabinets, and kept the framework of the galley kitchen and breakfast nook. A pantry was added, as well as a peninsula counter with a cooktop
and hood.

Since both Aponovich and Johansson are enthusiastic and accomplished cooks, they had a wood board crafted on which to make pasta. “A smooth surface like marble works for making pastry, but pasta needs a surface it can grip,” Johansson says, remembering what she learned at a cooking school in Cortona, Italy. When the couple makes ravioli, they like to use ricotta from Maple Brook Farm in Bennington, Vermont—“it’s the closest in taste to Italian ricotta,” Aponovich says. They also enjoy cheeses from Angela’s Pasta and Cheese Shop in Manchester. “We shop the same way in Peterborough as we do every day in Italy,” Johansson says. “Fortunately, we can get high-quality local foods, meats and fish nearby.”

In 2018, the couple renovated the master bathroom. First they gutted the five-foot-by-seven-foot room, since the floor under the shower was rotted. Then they “borrowed” space from the library to increase the bathroom to eight feet by ten feet. “We wanted a bathroom that was both functional and elegant,” Johansson says. “In keeping with the Tuscan style of the house, we selected Carrara marble for the vanity top and commissioned sconces from an ironworks in Pienza that are in a typical Italian style.”

Johansson says the sunrise in the living room is gorgeous, and at sunset, “the trees are illuminated and beautiful.” While the house is great for entertaining, it’s also a perfect place to work, affording privacy and quiet while still being only a twenty-minute walk to downtown Peterborough—a perfect blend of Italy and New Hampshire, and the best of both worlds. 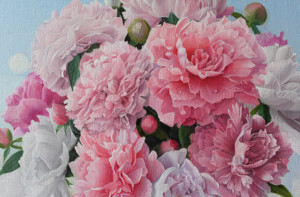 A close up of Still Life with Peonies, a 2018 oil on canvas by James Aponovich. “Peonies are one of my most loved flowers,” he says, “so I find myself doing a peony painting each year when they are in bloom in our garden.”

James Aponovich is an internationally renowned painter who was born in Nashua and served as New Hampshire’s artist laureate from 2006 to 2010; he is known for his elaborate still-life compositions and his paintings are part of the collections at The Currier Museum of Art, the DeCordova Museum and the Museum of Fine Arts in Boston, among others.

In 2011, Aponovich challenged himself to an unprecedented marathon: to create one painting every week for a year. The resulting fifty-two paintings were shown at the Clark Gallery in Lincoln, Massachusetts, in 2012. He also blogged about his process, techniques and philosophy at Aponovich 52 (aponovich52.blogspot.com), which was also the name of his show.

You can see some of Aponovich’s new work in June at Kelley Stelling Contemporary in Manchester. Called James Aponovich: Out of the Studio; Recent Drawings and Paintings, the show features still lifes, landscapes and his newest figure paintings from his Parable and Portraits series and opens Thursday, June 6, with a reception at 5:30 p.m. Since Aponovich’s work is part of the Currier’s collection, Kelley Stelling Contemporary will donate 5 percent of all sales to the museum’s art programs. 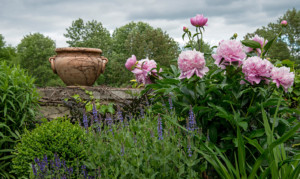 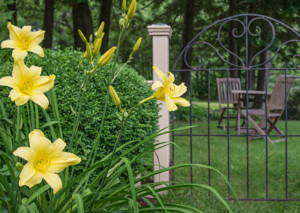 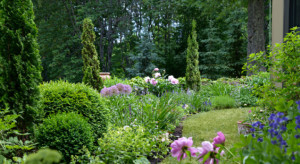 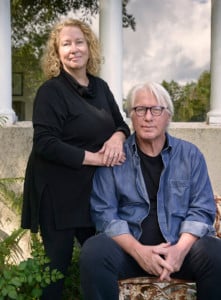 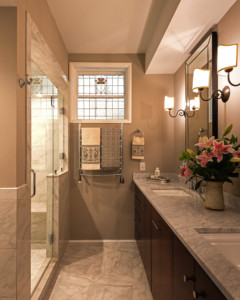 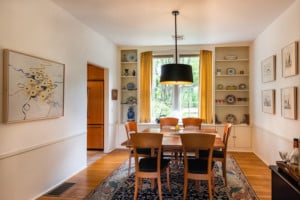 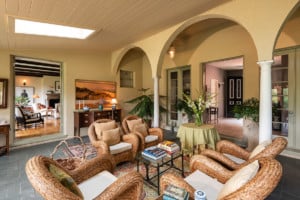 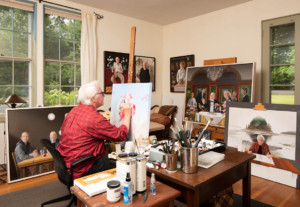