The focal point of Ann Marie and Bill McCarron’s light-filled, first-floor living area is hard to miss: a spectacular waterfront view of several small, rocky islands in the Piscataqua River separating New Castle from Portsmouth. The house, which is the Massachusetts couple’s summer home, is oriented toward the water. “Our goal was to bring the outside in,” Ann Marie says. “The kitchen flows into the dining and living spaces, and the back of the house is all glass.”

Featured on this year’s twenty-ninth annual Kitchen Tour, presented by the Music Hall in Portsmouth (see sidebar on page 81), the McCarrons’ New Castle home was built in 2012. The couple replaced the original small home on the property because zoning constraints and proximity to a tidal buffer made renovations to the existing structures difficult. The design by architect Jeff Demers, of Jeff Demers Design in Portsmouth, accommodates the home’s narrow, linear lot by organizing downstairs living spaces off a central hallway, accentuated by a vaulted, barrel ceiling; the hallway extends from a front foyer to double doors leading out to the back yard.

“Visitors come in the front entry, then turn right and see the water,” Demers says. “You change elevation from the entry to the first-floor living spaces. It is a procession dictated by the linear lot, and allowed us to get as close to grade and the water as possible.”

The progression also creates higher ceilings, opening up the space. Elements of Demers’s design were inspired by historical Portsmouth landmarks: the barrel ceiling, evoking the wooden hull of a boat, is similar to one at the nearby Wentworth by the Sea Hotel; the arches framing the kitchen and banquette areas are a nod to the historic John Paul Jones House, an eighteenth-century Portsmouth landmark.

Focusing on the kitchen’s function as “command central” of the first-floor living spaces, Demers designed features including a spacious, walk-in pantry directly off the kitchen as well as a wet bar and small office just across the hallway. The family-friendly banquette, built around a circular walnut table, provides comfortable seating just steps from the kitchen. “I like designing a banquette for a kitchen area because that’s where people hang out,” Demers says. “It’s a softer option for seating and gets used a lot.”

The casual dining area is a favorite of the McCarrons and their twin sons. “It’s a great area to eat breakfast,” Ann Marie says. “We can seat at least six.”

Mari Woods, of Mari Woods Kitchen Bath Home in Portsmouth, and Don Cook, of D.D. Cook Builders, Inc. in Greenland, rounded out the McCarrons’ design and construction team. Woods created the kitchen’s classic look. “They wanted a comfortable space that took advantage of being close to the water,” she says. Understated elegance was key—as was integrating the color white, Ann Marie’s preference (the kitchen walls, Farrow & Ball’s Borrowed Light, are a soft blue). “They have beautiful water views and unique artwork,” Woods says. “They’ve introduced a beach theme that dresses the spaces up without too much visual clutter.”

An open concept that encourages cooking and conversation

Woods and Demers collaborated on the open-concept kitchen; its U-shape encourages cooking and conversation across the first-floor spaces. A peninsula on the far side of the room, containing the cooktop and stove hood, faces the water and overlooks an adjacent, formal dining room (the dining-room side of the peninsula contains shelving and extra storage).

The kitchen is built for convenience. A large, walnut-topped island—constructed by Traditional Wood Works of Berwick, Maine—anchors the space with seating for four. The island also maximizes storage, containing two beverage drawers as well as a microwave, recycling bins and shelves with handy, pull-out baskets for storing vegetables or kitchen necessities.

Across from the island, a porcelain apron-front farmers’ sink is positioned to easily access the dishwasher and counter prep areas. An open, plate rack to the left of the stove is built with removable dowels for easy cleaning. Statuario marble countertops ring the space, adding visual contrast. Appliances, including the Sub-Zero refrigerator and freezer, are tucked behind the built-in custom cabinetry by Levant Kitchen Furniture, in Millersburg, Ohio.

Hanging from the ceiling, just off the kitchen is a recent addition to the McCarrons’ growing art collection: an ethereal, stainless-steel sculpture called “Peter Pan” by Rainer Lagemann. Representing a figure diving, the sculpture is positioned toward the water, another reminder of what makes the home so special.

Bill says the family “virtually lives” in the kitchen. “From anywhere on the first floor, you can see out to the water,” he says. “That’s what we enjoy the most.”

The twenty-ninth annual Kitchen Tour, presented by the Music Hall, takes visitors on a tour through nine kitchens in historic New Castle. The self-guided, walkable tour offers a glimpse into a wide range of culinary gems. “This year, there’s lots of variety in the homes we’re featuring,” says Ashleigh Tucker Pollock, special events manager for the Music Hall. “They range from 1660 to 2012, with kitchens that are cozy charmers, ultra-modern showstoppers and everything in between.” The architects, designers, craftsmen and artisans who’ve created the spaces will be at each location to answer questions. 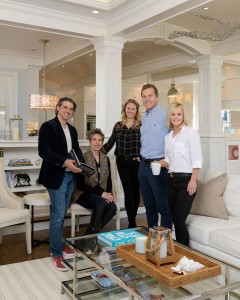 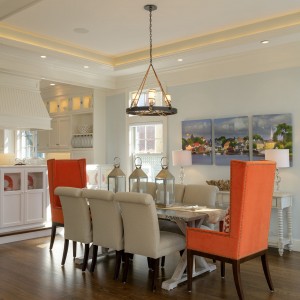 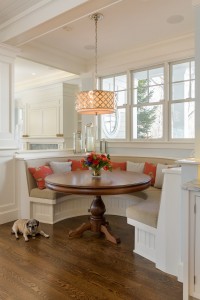 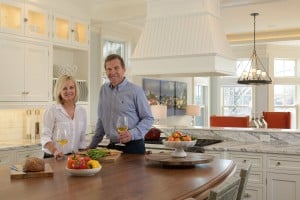 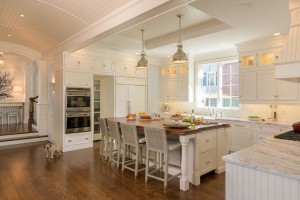 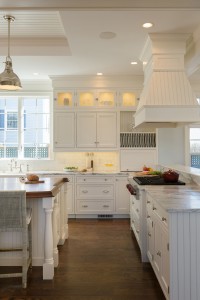 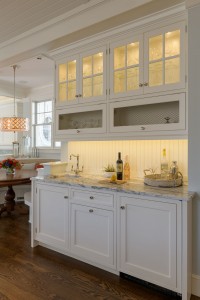 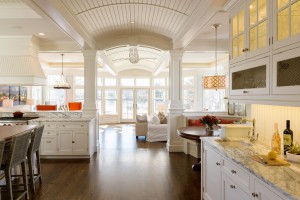 Garden Inspiration for Everyone