A Home With Many Fabulous Kitchens

A Windham couple created a house to reflect their love of contemporary design—and accommodate a family getting bigger.

After twenty years in one house, Rachelle and Mark (who prefer their last names not be used) had a few ideas for what they wanted in the next one: for it to be centered around family, designed in part for their three grown children and grandchildren, and for there to be plenty of space to celebrate Thanksgiving.

Achieving these goals—and more—took a lot of talent, but Rachelle and Mark’s house is a reflection of where they’ve been and where they are going.

When Mark and Rachelle first bought a lot in a small development in Windham in 2009, they were working with a clean slate. To help them turn ideas into reality, they began building a team that included Dream Kitchens’ Nina Hackel, owner, and Donald Smith, an associate kitchen and bath designer certified by the National Kitchen and Bath Association (NKBA); Diane Dubberly, owner of Artistic Tile LLC; and Ken Walsh of Ken Walsh Design Build.

“Rachelle and Mark like very contemporary design,” Dubberly says. “And they wanted to combine that with a house that wouldn’t be out of style in a few years, but would still have a welcoming feeling—the feeling you get at a really nice hotel.”

So, Rachelle and Mark got started by doing their homework. They would drive around, looking for homes they liked and then research who built them. “Ken Walsh is the only builder we found who truly enjoyed contemporary homes,” Rachelle says. “When we went out and I showed him my favorite house in town, it was his house.”

For the home’s interior, Rachelle and Mark laid out their specific needs, which centered around the kitchen—or to be more accurate, kitchens. Rachelle says she loves to cook and wanted a kitchen designed for easy entertaining. One of their sons keeps kosher, and so his parents wanted a kosher kitchen for him. And then, there was the lower level of the house, near the media center and patio area, and where Rachelle envisioned plenty of parties while watching sporting events.

Thanks to a growing family, all that cooking space gets put to use. “The whole family comes here every fall,” says Rachelle. “I asked the boys, ‘Tell your wives, you’ll go there for all the holidays. Except Thanksgiving—that’s here.’”

For the main kitchen, says Smith, “we tried several designs before we settled on a circular setup. We had two rectangular islands going one way, and then another. But eventually the circle made the most sense.”

This design allows Rachelle and Mark unobstructed views of the main living area (particularly helpful when their one-year-old grandson, who lives in the home’s lower apartment with his parents, comes upstairs to visit) and out to a pond, over the family’s outdoor living area and cascading waterfall. Smith suggested clipping off a wall’s 90-degree corner, creating a flat wall with a window.

The back “wall” of the kitchen is made of quarter-figured maple. “Because ‘modern’ can often be cold,” Hackel says, “we used wood in the kitchen to help create a warm house.” The wall houses four ovens (“at Thanksgiving, they’re all going,” says Rachelle), four freezers, an appliance pantry and plenty of storage space.

“Our kitchens are designed to be user-friendly,” Hackel says. To make it that way, everything has its place. With drawers and cabinets for storage in all possible spots, the kitchen remains clutter-free.

“This is my favorite,” says Rachelle, opening the appliance cabinet. “All the appliances stay in here—the blender, toaster, Keurig. There are plugs in here and the shelf is metal to keep it from getting hot. It’s fabulous.”

The circular island—made of stiletto glass tile with an elevated glass bar around the top—anchors the main kitchen and determined the room’s dimensions. “This was the largest piece of glass we could get in one piece,” Smith says.

The island helped launch the design elements throughout the home. Across the room is a circular bar area; on the other side of the wall of the bar is a circular staircase; behind the kitchen is a circular dining room table. The kitchen’s main eating area has a square table to offset, but its modern chairs and bench (which Rachelle says she’s always wanted) have a rounded feel. The ceiling above the island has a recessed circle—one of the many touches Mark designed and oversaw.

But it’s the accent pieces throughout that truly convey the couple’s sense of style and family. “Everywhere you look, there’s a ‘wow’ piece,” says Hackel. “It’s not just a big, open space. There are a lot of things that attract your attention—the tile, the under-bar lighting, the ceiling, the artwork.”

These big pieces work in harmony with signs of everyday living: a collage of wedding photos, grandchildren’s names and pictures, portraits of children through the years—and in the kitchen, a custom-made sculpture designed to showcase the family tree through the use of circles and rods. 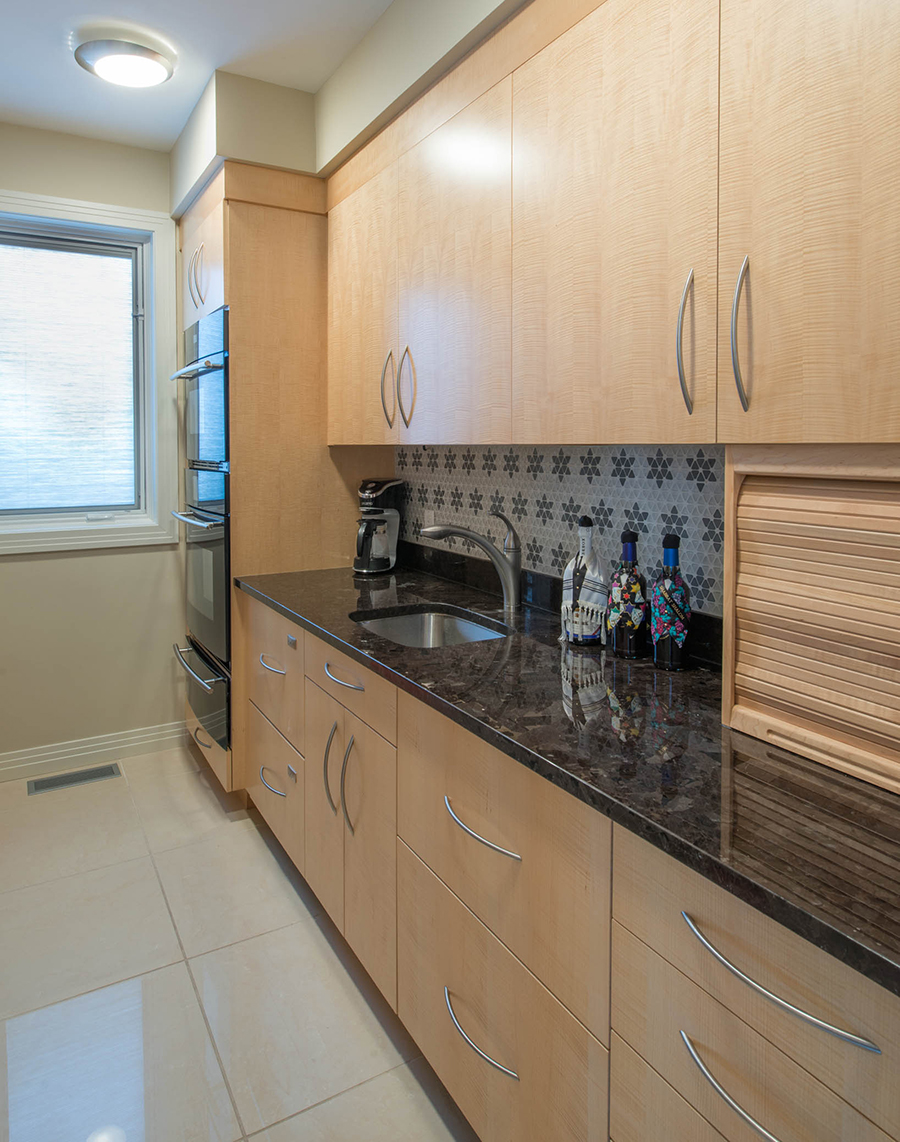 For the kosher kitchen on the main level, the six-pointed-star tile design on the backsplash nods to the reason for the room’s creation.

Behind the main kitchen is the galley-style kosher kitchen, complete with its own refrigerator, dishwasher, stove and tableware.

The third kitchen in the home also has its own distinct look. “It’s modeled after one I saw in a showroom,” Rachelle says. “There were plenty of colonial and traditional kitchens, and then there was one modern kitchen. I brought the team to the store and said, ‘I want something like this.’”

The actual design of the lower kitchen had to get fast-tracked, Smith says. “We weren’t quite done when Mark said the concrete’s being poured in a couple of days,” Smith says. “We had to hurry up and figure out what’s going where to get the conduit laid properly. It was a long few nights.”

This kitchen is where the parties take place. The lower kitchen—defined by its quarter-sawn oak and whimsical crocodile tile floor—looks out on the patio, pond area and waterfall to the right, and to the five televisions feeding from six satellites in the media area on the left. The kitchen features a built-in grill and steamer, and plenty of storage.

“This house is absolutely Rachelle’s dream house. I wanted her to be able to walk into every room and be happy,” Dubberly says. “As a team, our roles were to help her get there.”

And that’s just what happened. “We love it here,” Mark says. “We’re not going anywhere.”