A House at Home on the Lake

The 2016 winner of the New Hampshire chapter of the American Institute of Architects People’s Choice Award, along with an honorable mention for New Hampshire Home 2016 Design Awards Home of the Year, is the result of inspired collaboration 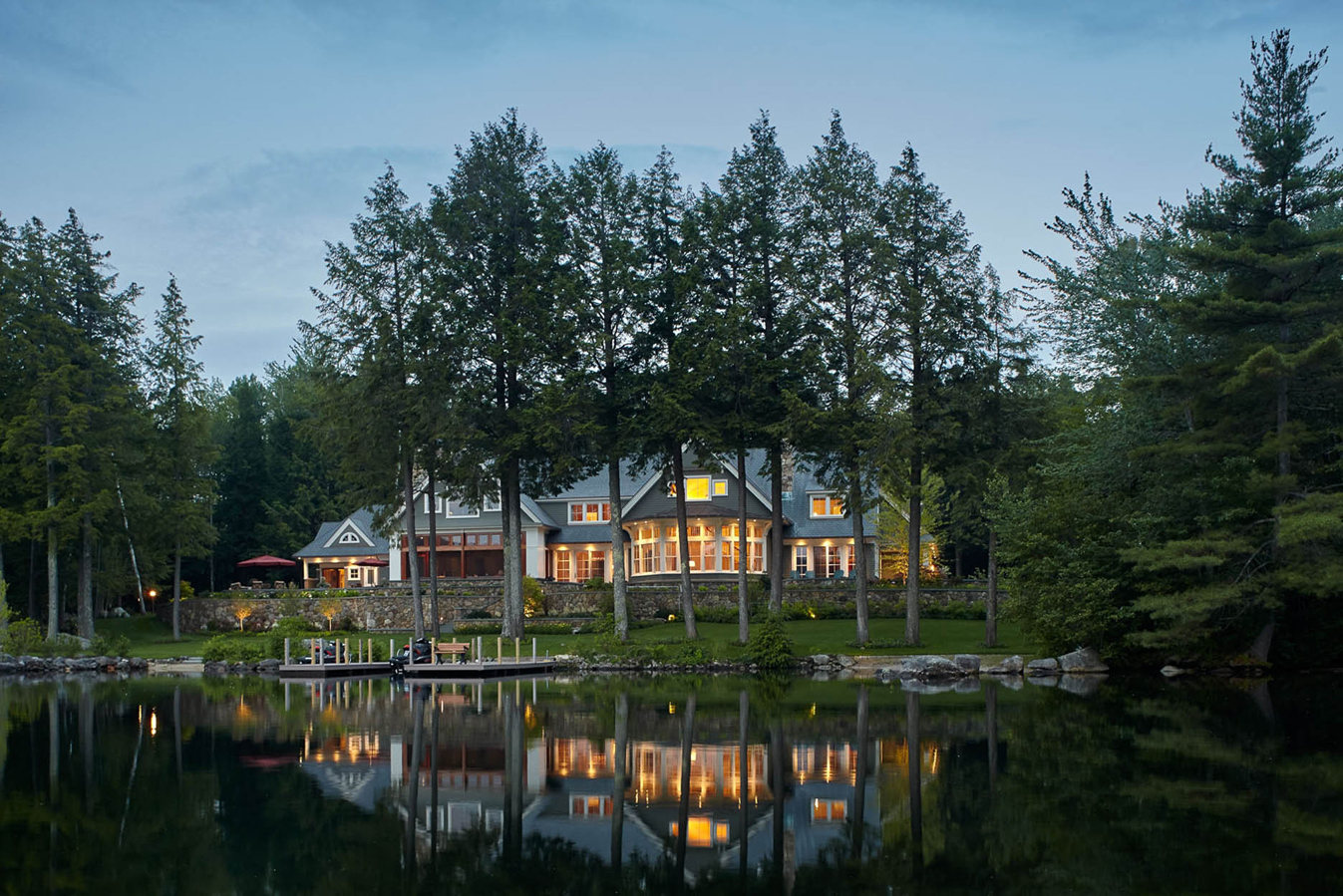 The 2016 winner of the NEW HAMPSHIRE CHAPTER OF THE AMERICAN INSTITUTE OF ARCHITECTS People's Choice Award, along with an honorable mention for NEW HAMPSHIRE HOME 2016 Design Awards Home of the Year, is the result of inspired collaboration.

For generations, Lake Winnipesauke has been a destination for those who want to be rejuvenated and restored. Around the lake, the light is extra bright, and on sunny days, the water sparkles. Often on summer afternoons, a breeze kicks up little white caps that curl and break down the lake’s middle expanse.

One homeowner had that picture in mind when a real estate agent told him about a house for sale in a cove. The homeowner acted promptly, bought the house and then the adjacent house as well. 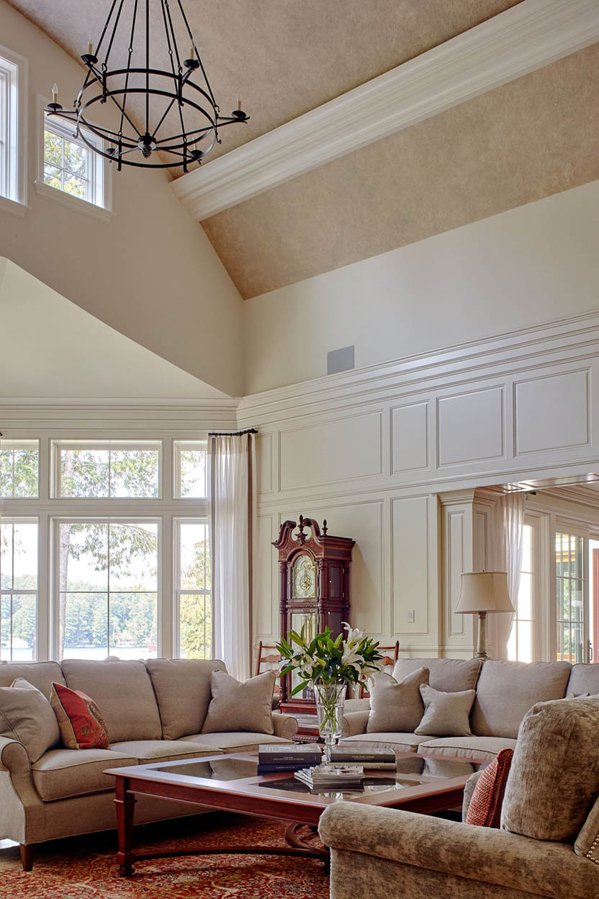 Elegant paneling and a curved, vaulted
ceiling painted in a warm buff shade give
the great room its airy feel. The grandfather
clock sets a comfortable human scale for
the conversational seating area.

But the big decision was not just the house site. The homeowner liked the tennis club in Wolfeboro as well as the downtown with its shops and restaurants. Nearby he’d found trails to hike and bike, and he enjoyed exploring the lake by boat. During his vacation stays, he’d met a great group of people. The community was welcoming, and he felt at home. Wolfeboro was right for him.

Building a new house presented him with a creative challenge, and it was one he embraced. A self described “lake guy,” the homeowner had a vision. “For example, I knew I wanted the bedroom on the east side, to wake up with the sun. In the summer, it makes sense for a house to face north. It’s cooler. I wanted a house that was livable on a small scale, but also one that could comfortably accommodate friends and family. New Hampshire summers have great days when you can open up the windows. I like to grill outside. Still I wanted the option of protection. So, some version of a screened-in porch was what I had in mind.”

When his real estate agent recommended builder Jon Lovering of Jonathan R. Lovering & Sons in Wolfeboro, one of the premier builders on the lake, the homeowner trusted her. The homeowner also wanted an architect who was highly collaborative. Lovering recommended Lisa DeStefano of DeStefano Architects in Portsmouth. After just one meeting, the homeowner was on board. Then DeStefano recommended landscape architect Rob Hoover of HBLA Inc. in Portsmouth and interior designer Tracy Davis of Urban Dwellings in Portland, Maine. This stellar group became the homeowner’s core team along with Lovering’s highly skilled subcontractors.

“I met the homeowner in December 2013,” DeStefano says. “The next time we met, I was presenting a plan. Ninety percent of the time, we worked remotely. It was a tight schedule because the homeowner wanted to begin work that spring. But everyone on the team was totally vested in making it happen. The great thing about the homeowner was his focus on the project. He was excited for the calls, and responded with thoughtful and concise questions.”

The result is a nine-thousand-square-foot house, which looks traditional from its street entrance. A large, curved copper arch over the door, topped by a shingled peak centered with a small porthole window, is pleasantly symmetrical. Decorative brackets and quoins create further visual interest, and the two wings have two matching dormers. Two low stone walls define the entry garden. Yet walking in the front door, the house feels intimate and surprisingly informal. “That’s right,” DeStefano says with a laugh. “It’s a lake house.”

Straight ahead, in the two-story great room with bay windows is an exhilarating view of the lake. Anchoring this view are two massive, parallel fieldstone fireplaces. The house is high enough to see a far distance, but it’s just a short stroll down to the water.

Hoover created the site plan. “I worked on everything from the foundation outward,” he says. “First, we really wanted to nestle the house into the landscape. But the big challenge was the steep change of grade, about twelve feet or so, over a very short space. How do you make up that change of grade, yet make it very personal and have it feel comfortable?”

Retaining walls were in order. To harmonize them with the site, Hoover played on a very simple metaphor—how water moves when you drop a pebble in it. The result was three sinuous walls capped with bluestone that undulate around the house. Each level has its own plantings, and a curved stair connects the wide patio, which wraps around the house, to lake level.

“I provided the design, and drafted and redrafted until we got it,” Hoover says. “Then I turned the plans over to the homeowner and builder to further refine the design as it was built.” 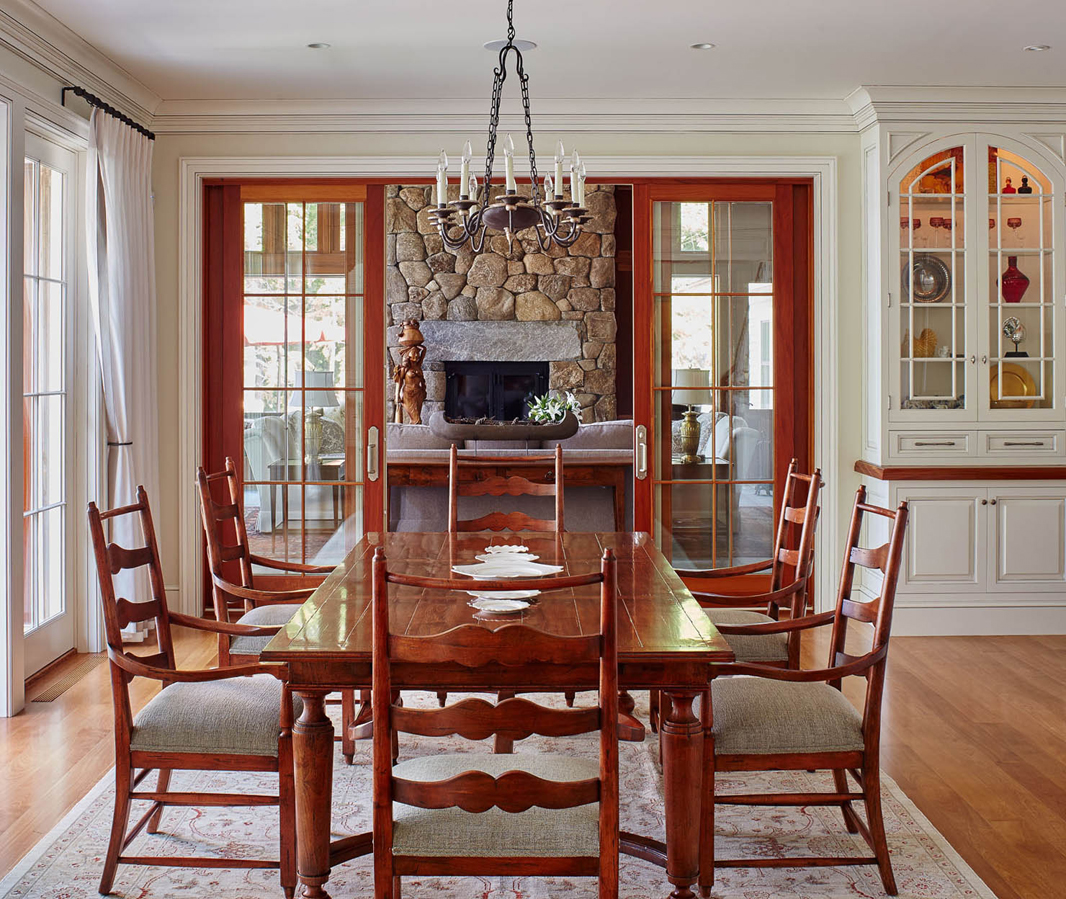 From the dining room, two fireplaces can be seen along one axis, one to the east in the
summer room (shown here), and one to the west in the great room.

Seeing inside and outside

“Lisa provided us with great bones,” says interior designer Davis. “She had a vision for the great room and, most important, how that room should feel emotionally.”

Pulling from the seasonal tapestry of the lake, surrounding woods and mountains, Davis developed an understated color palette. She used these colors throughout, varying the textures, materials, prints and paints. For example, the soft gray used to glaze the white paneling throughout the house is present in furniture fabrics, the summer room’s granite floor tiles and a plush bedroom rug; the same color is applied dramatically as a gray border on the sheer curtains in the great room. “Oh that,” Davis says. “I wanted to echo the gray tree trunks just outside of those windows.”

The team would often gather to discuss decisions and met with mason Michael DelSesto of Hayden Hillsgrove Stone Masonry, Inc. in Moultonborough to handpick fieldstones for the chimneys, choosing warm buff and gray shades. The team chose red birch for the flooring and walnut for an inlay border in the great room. Mahogany was stipulated for the banister and its hand-carved newel post, adding a traditional and elegant focal point.

DeStefano designed the summer room to meet and exceed the homeowner’s expectations. In that room, a custom window system can be slid to fold up accordion-style and fit into wall pockets. The window screens are motorized, and a recessed all-weather TV screen can be accessed with the touch of a button. There’s a fireplace and a grill.

Davis’s palette in the summer room reflects that of old-time lake camps. The green walls, rich natural wood, granite tiles and fieldstone fireplace almost complete the look. But it’s the vivid carpet that grounds the space.

Leading out to the patio is a small spa area, which includes a hot tub and access to an outdoor/indoor shower adjacent to the master bedroom suite. Tucked into the suite is a small master den near the summer room with close access to the kitchen, realizing the homeowner’s vision of a house that can “get small.”

The home’s west wing features a cozy media room and an upstairs guest suite that can accommodate a whole family.

Lovering’s cell phone rings just like an old-fashioned black rotary dial phone. And, it rings often. Lovering takes it all in stride and never loses focus as he describes various features. “It’s the details that make the difference,” he says.

For example: In the entrance, he points out the curve of the roof dormers and the uptick on the house’s corners above the stone foundation. In the great room, he draws attention to the glazing and curved, vaulted ceiling. The kitchen cabinetry curves as well, and the marble counters are double thick with a profiled edge. A floral mosaic in a guest bathroom is an unexpected delight. In the basement, Lovering explains how the geothermal system works, along with the radiant flooring and soundproofing. As one of his subcontractors said: “Jon is a great builder to work for. He really orchestrates the whole project so that every step is timed appropriately. He expects quality work.”

Behind the scenes, Lovering’s wife, Pat, runs the office, following up on schedules and everything else. “Pat is Jon’s left hand and his right hand,” DeStefano says. Lovering smiles and agrees.

As the homeowner reflects on his new house, he clearly has tremendous enthusiasm. As envisioned, his lake house harmonizes with the cove. With its thoughtfully designed spaces, he can share his home with friends and family, and he can also choose to live more quietly, all in tune with the seasons. 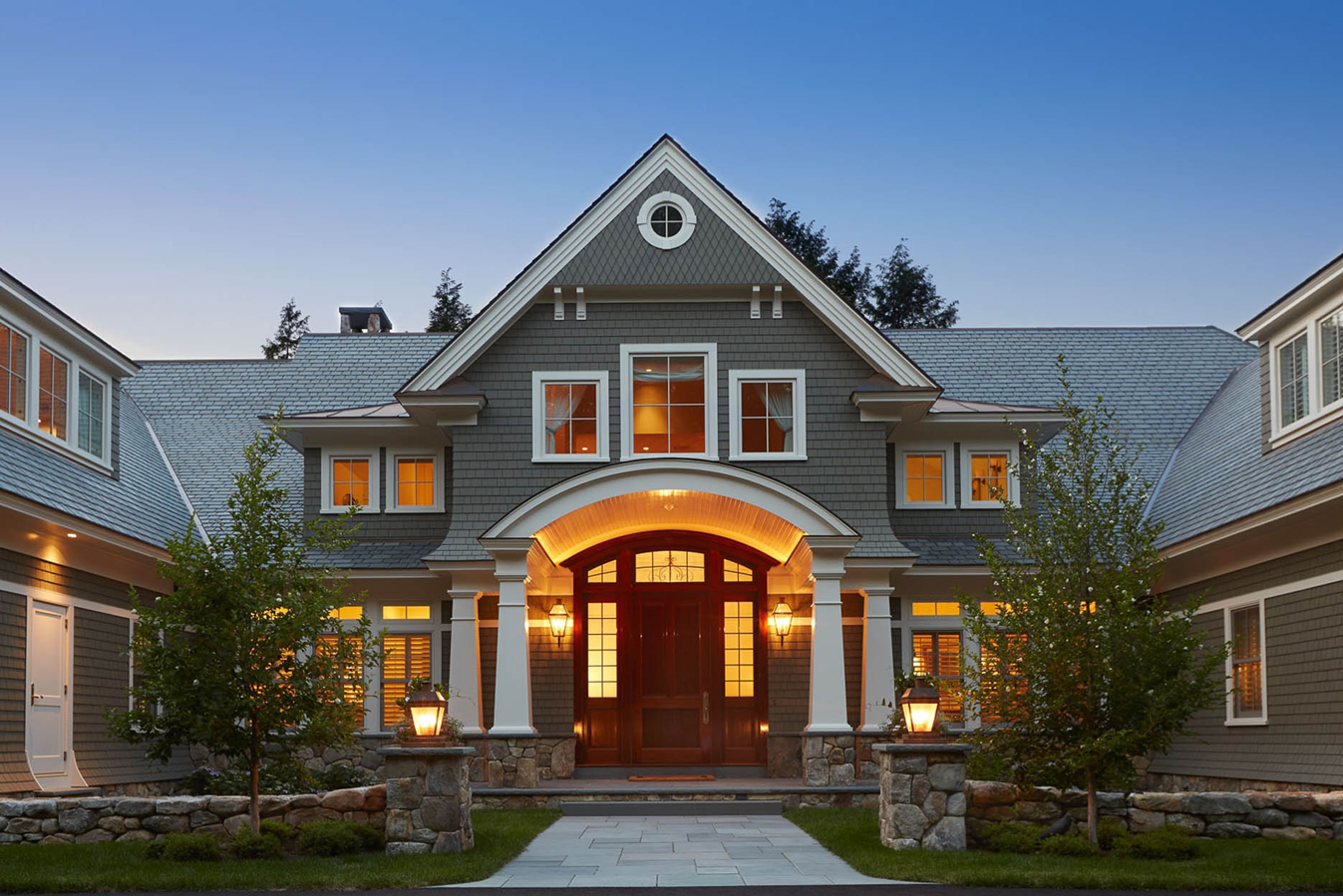 The entryway's curved copper roof is dramatic, while two low stone walls open up to an intimate garden entry. 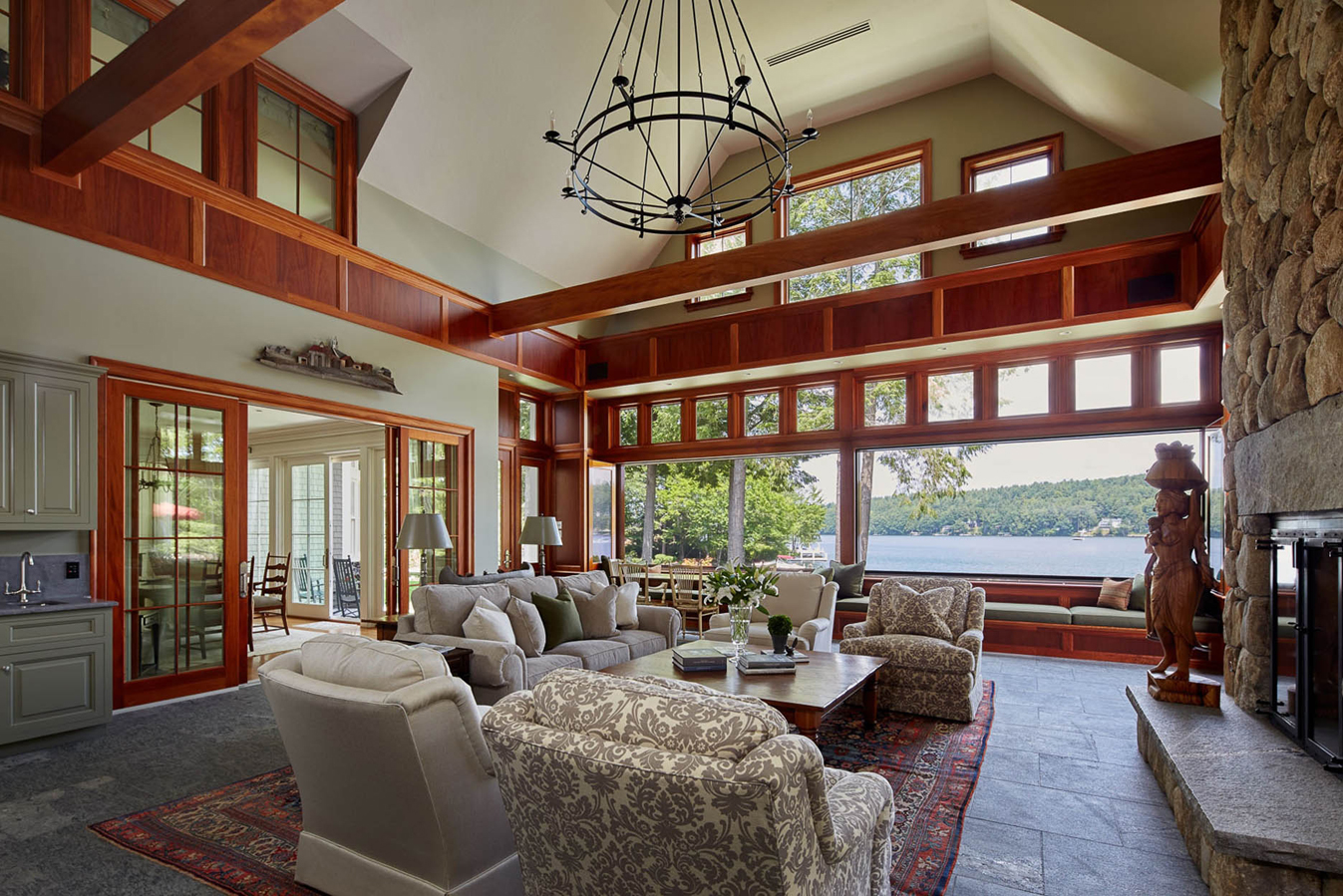 With no screens to cloud the view or impede a breeze, the summer room's custom windows can be manually folded up to fit, accordion-style, into a pocket. If the bugs do come out, the window screens are motorized. 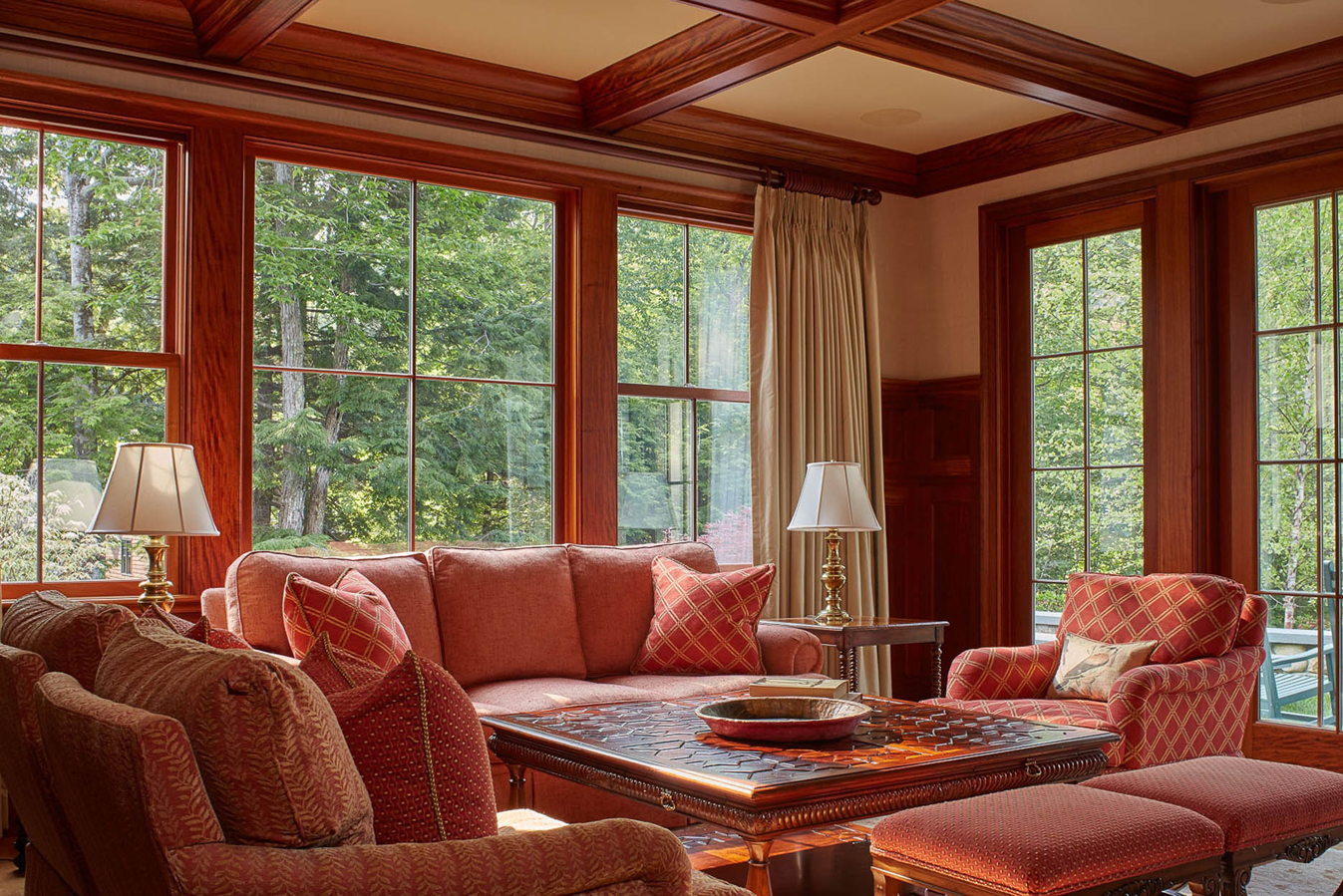 This comfy room is perfect for a movie night or just socializing with friends and family. Here are new variations on styles seen throughout the house: the big four-paned windows, warm earth tones and a paneling design. 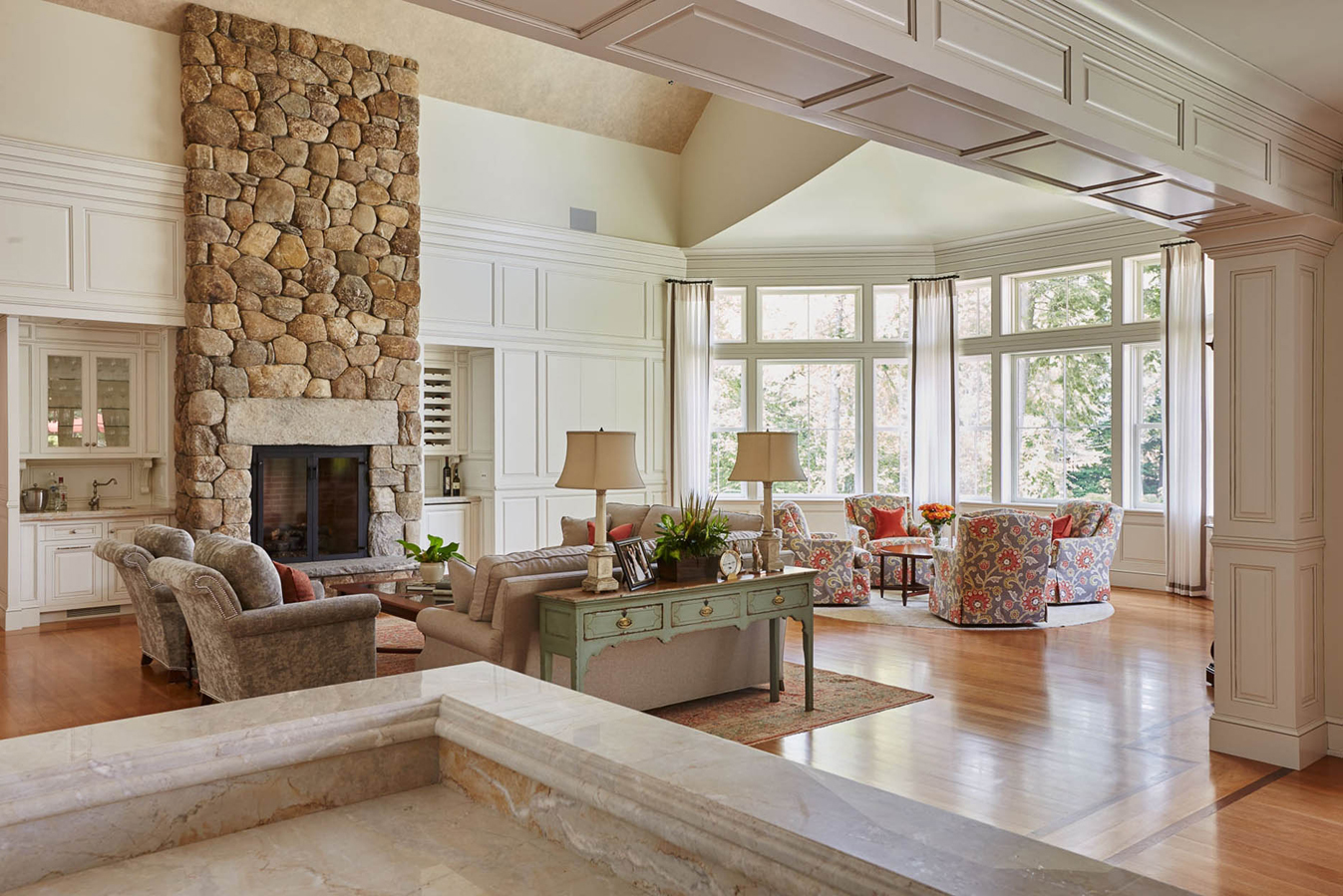 The team—home-owner, architect, builder, interior designer and mason—met often to choose just the right stones for this fireplace in the great room. The colors of these stones are seen throughout the house. 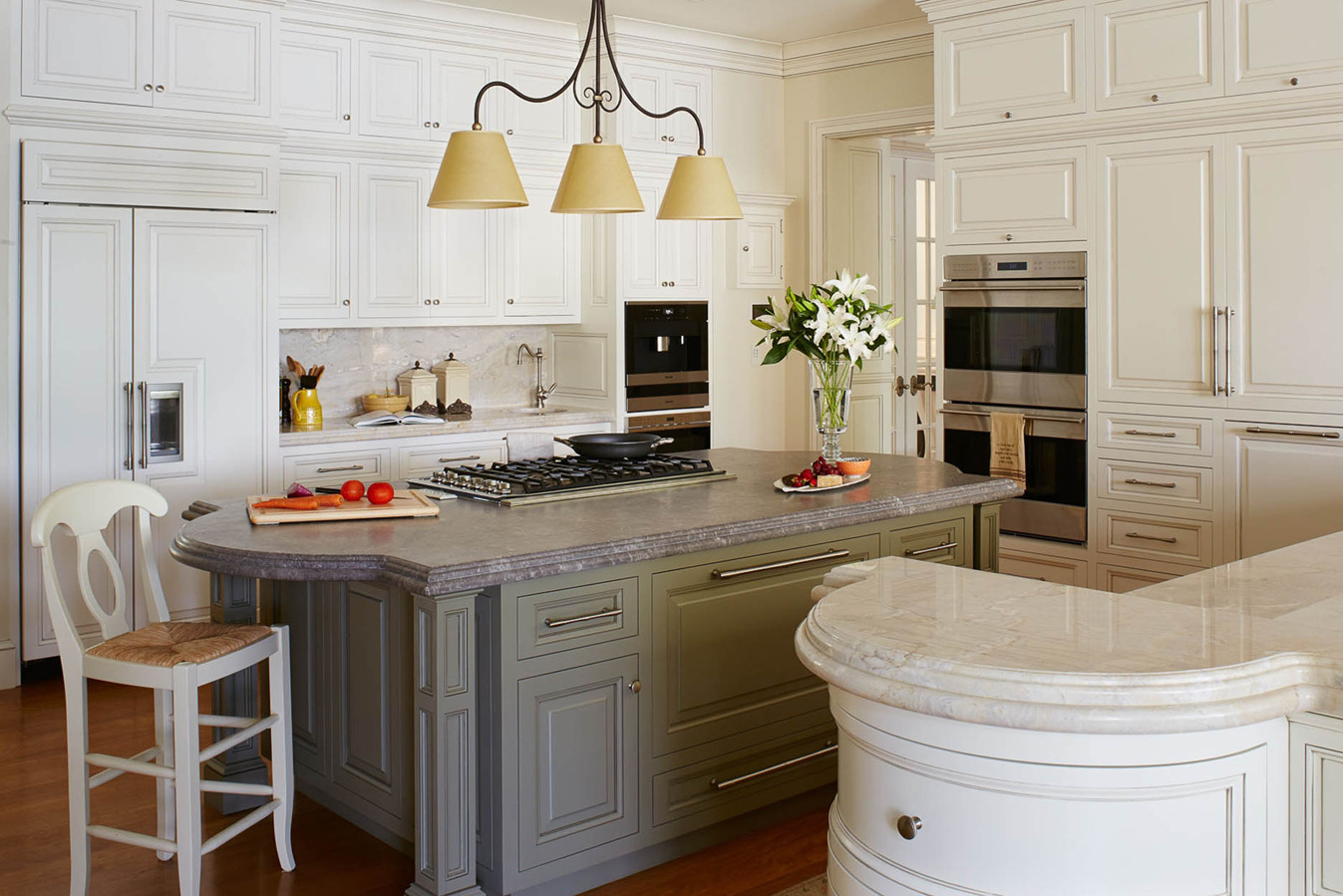 A curved marble counter with a beautifully crafted curved cabinet defines the kitchen in a space that's open to the great room and the dining room. 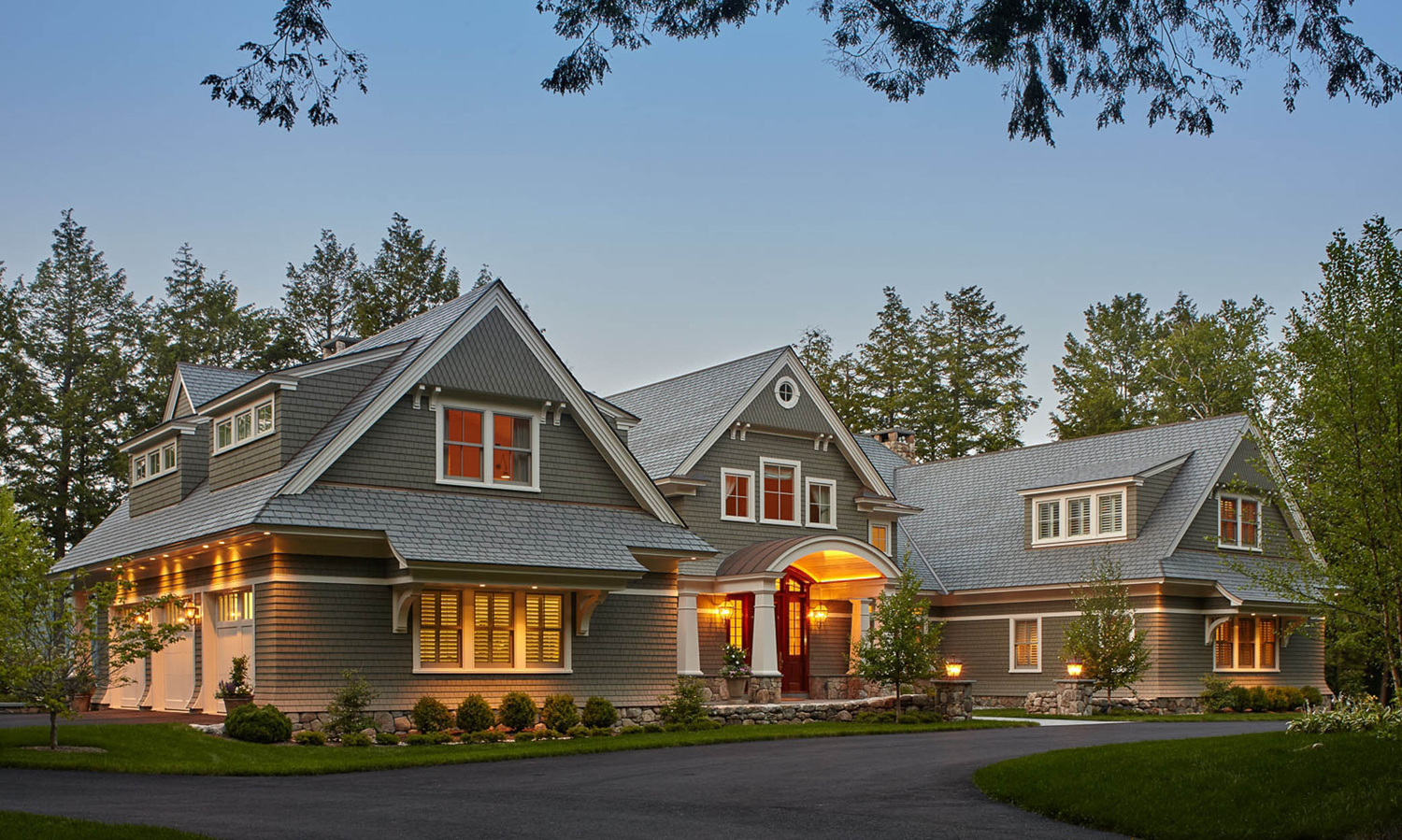 Anchored by stonework along the foundation, the house, as seem from the street, is pleasantly formal. Slight upward curves over windows and at the base of each corner balance the steep rooflines. Dormers and decorative details—from siding, to roof brackets, to quoins—create further visual interest.
Categories: Architecture and Interiors