A House Built for Two

This well-crafted, net-zero home will shelter its owners well into the future with low-cost energy and thoughtful design. 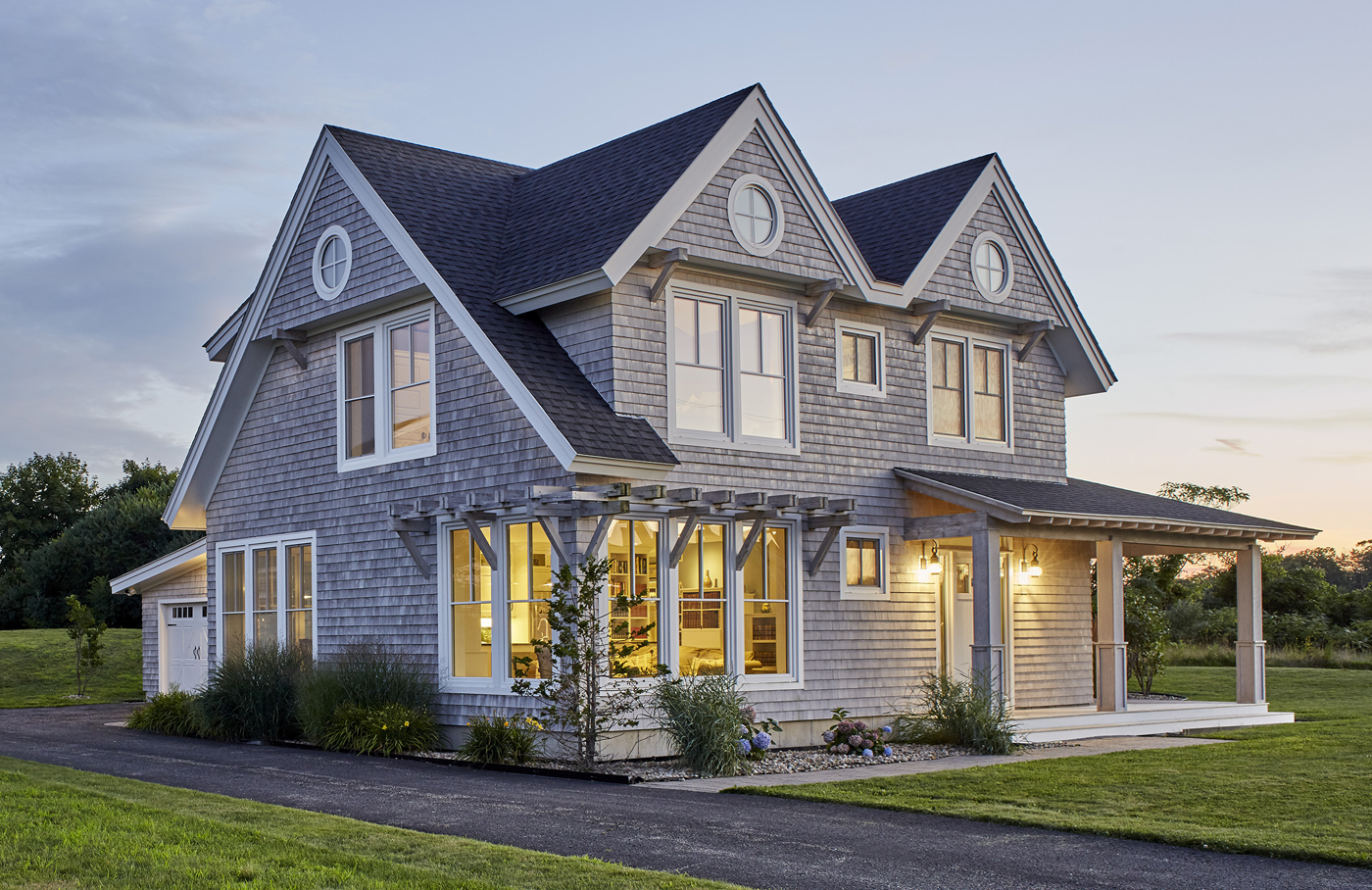 This new, net-zero home on the Atlantic coast—designed by Phil Kaplan, of Kaplan Thompson Architects in Portland, Maine—is at ease in an old neighborhood, basking in the soft light of a summer sunset.

The house sits squarely on a sunny lot next to the marsh, across the road from the harbor, and looks out to sea. The surrounding neighborhood has variations on coastal cottages, and this new house—with its clean, tailored look—is a part of that constellation, both by regulation and preference.

Upon entering this home, its interior is open and full of light. The feeling is warm—even though the predominant colors are cool, neutral shades of blue, white, gray and beige. High ceilings give the main room a sense of spaciousness without losing its essential cottage feel. The home is two thousand square feet.

“We wanted to build a house that was like a 1920s seaside cottage,” homeowner Diana Kelley says. “The layout is one hundred percent our life—functionally dysfunctional. We travel a lot, and when we’re home, Ed and I like to be together. When we entertain, it’s usually for just a few close friends.” 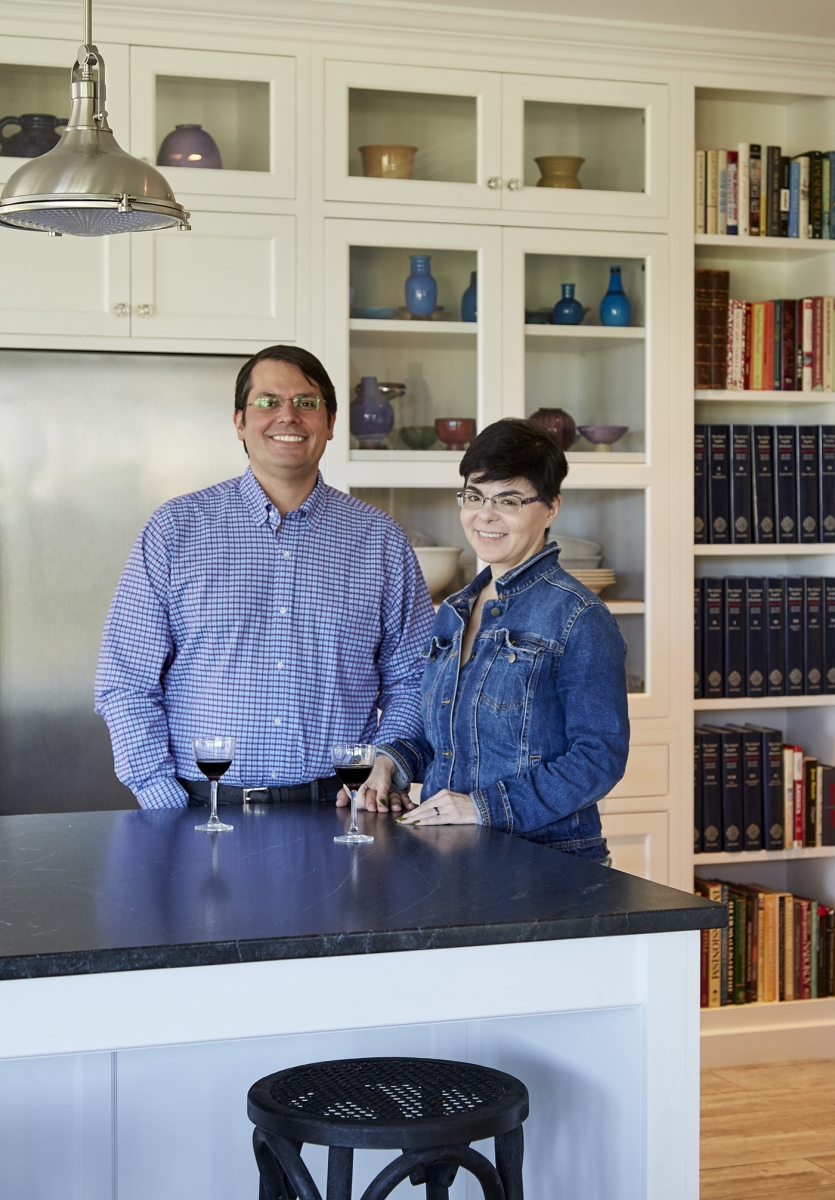 Homeowners and husband and wife, Ed Moyle and Diana Kelley.

A large couch faces the east wall that is banked with windows and an entertainment center with a central set of doors. Those doors open to a reveal a large-screen television. “We had to hide that black screen,” says homeowner Ed Moyle.

Together, Kelley and Moyle designed and chose detail after detail to create a home they could live in for a long time. For example, the downstairs flooring is textured “wood” ceramic tile. The tile is just the right shade of gray, and its texture provides traction for their two dogs and two cats.

“This took some trial and error,” Kelley says, “because stores wouldn’t let us borrow tiles to lay out and assess at home.”

“We bought boxes of the stuff,” Moyle says, “and donated what didn’t work to Habitat for Humanity.”

“Let me show you how the windows work,” Kelley says. She turns a latch, and one of the large windows easily pulls out from its frame and tips open at the top. These tilt-and-turn-style windows can also swing open like a door. Since the windows are set into a deep wall, there was ample room to install automated shades. The shades work with silent efficiency. Cindy Milne, of The Lighting Center at Rockingham Electric in Newington, designed the lighting. She achieved this bright, warm look using energy-efficient LED lights.

“Our architect and builder were amazing,” Kelley says. “We wanted to build a net-zero house, and they were both experienced in that kind of construction.”

“Generally, we pay $12.95 a month for our electrical connection,” Moyle says. “In the warmer months, we pay into the grid; and then in the winter, we use our credits. It all balances out. Truly.”

“At first, we thought we should have heated floors,” Kelley says. “But it’s not necessary. The house is always the same temperature.”

Kaplan Thompson Architects, in Portland, Maine, and Jesse Ware, formerly of Futuro Construction in Portsmouth and now with Placetailor, a passive-house builder in Boston, teamed up to design and build the Kelley-Moyle home. Both companies are committed to net-zero building, and as like-minded building pioneers in New England, they had already worked together on other projects.

“With proper construction, a net- zero house can be built for just about any style house,” says Phil Kaplan, a principal of Kaplan Thompson and the project architect on Kelley and Moyle’s house. “Our three main assembly features are super-insulation, high-performance windows and doors, and airtight construction with ventilation. The walls are one-foot thick and filled with dense-pack cellulose with borate so they won’t burn. The high-performance windows are triple glazed and have argon gas in between the layers so there’s no condensation. They’re rated R-6. The brand name is Intus.” 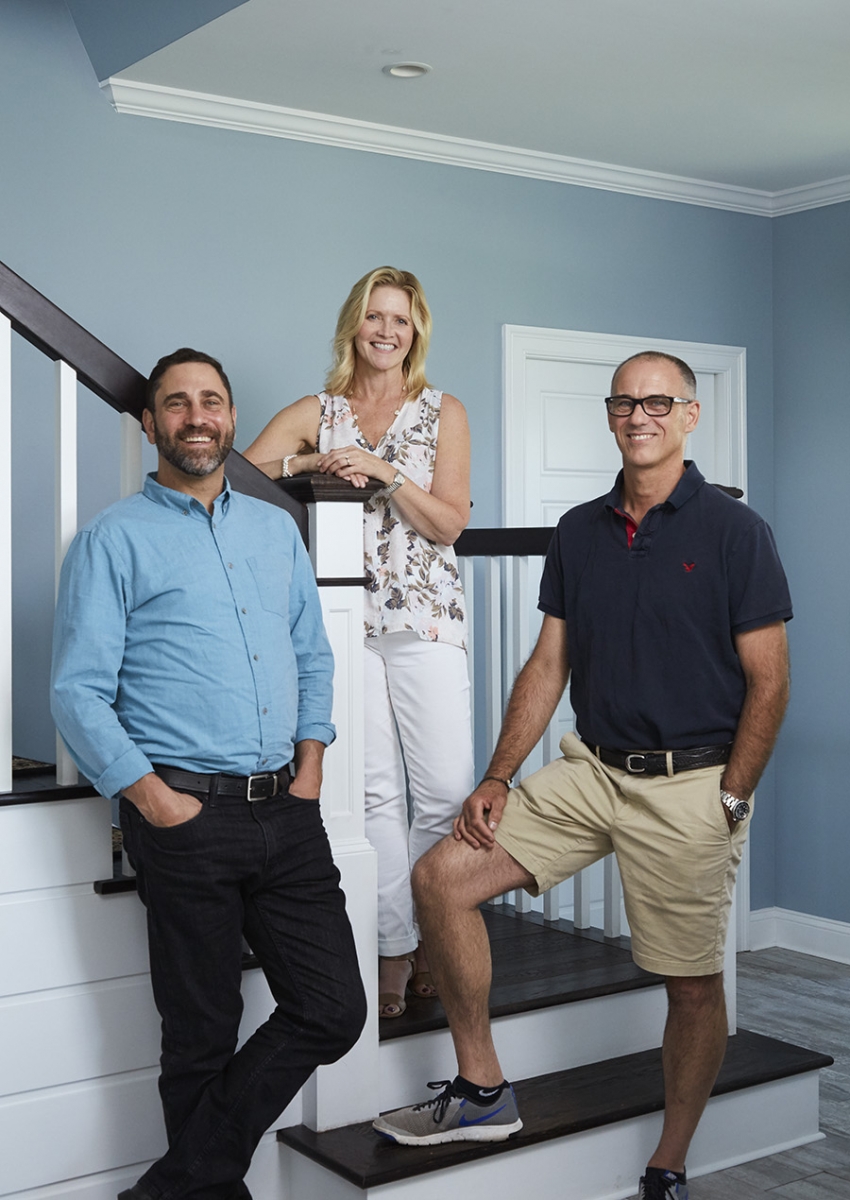 Members of the design team include Phil Kaplan (left), a principal of Kaplan Thompson Architects in Portland, Maine; Cindy Milne, lighting designer at The Lighting Center at Rockingham Electric in Newington; and Jesse Ware, now project manager at Placetailor.

Kaplan Thompson did all of the energy modeling for the bank of solar panels installed on the south-facing part of the house where Kelley and Moyle have their joint office. Gazing out the window, the panels are unobtrusive. It’s all about seeing the marsh.

Kaplan Thompson’s project manager, Jamie Broadbent, refined the early sketches and turned them into construction drawings for Kelley and Moyle.

Ware senses some confusion. He tries a metaphor.

“Think of the insulation like a mitten,” he begins. “Your hand doesn’t get cold as quickly in a mitten. A slab that’s insulated all around, including the edge of the slab, doesn’t get cold that easily. Directly underneath the slab is plastic, and everywhere else we use building membranes.”

Additionally, Ware uses elegant, tough European tapes—instead of staples, nails or glue—to seal the plastic and building membranes to create a tight envelope. “Many of the materials we use are from Europe,” Ware says. “The U.S. is just now beginning to catch up.”

Given the tight envelope of a net- zero house, ventilation is critical. First, it’s important not to add any off- gassing elements during the construction. Ware notes that the house is essentially free of volatile organic materials (VOCs). The plywood for the flooring and cabinets was all made with low-volatile organic materials. “And, we used paints that have zero VOC, and some low- or zero-VOC sealants,” Ware says. “It all makes a difference.”

One of the major components of the house is a fresh air ventilation system. The energy recovery ventilator (ERV) actively exchanges the air in the house three times an hour, Ware says. It cools, heats and manages moisture. In the warmer seasons, it cools and dehumidifies the air. In cooler seasons, the ERV warms and humidifies air. But mainly the ERV keeps the temperature and humidity constant.

To fulfill the aesthetic wish of the owners, both Kaplan Thompson and Ware worked the details to create the look of a 1920s cottage. Often, a modern cottage is a bit oversized and has myriad touches. Here, Kaplan Thompson designed a look that is simple and proportionate. The house sports traditional roof brace details, and the front porch has exposed rafters. There are built-in solar shades constructed with wooden slats. These work much like Venetian blinds. Up on the gable, porthole windows lighten the interior and give the house its own long views of sea and marsh.

For Kelley and Moyle, their home is about their lives now as well as their commitment to a sustainable future for others. 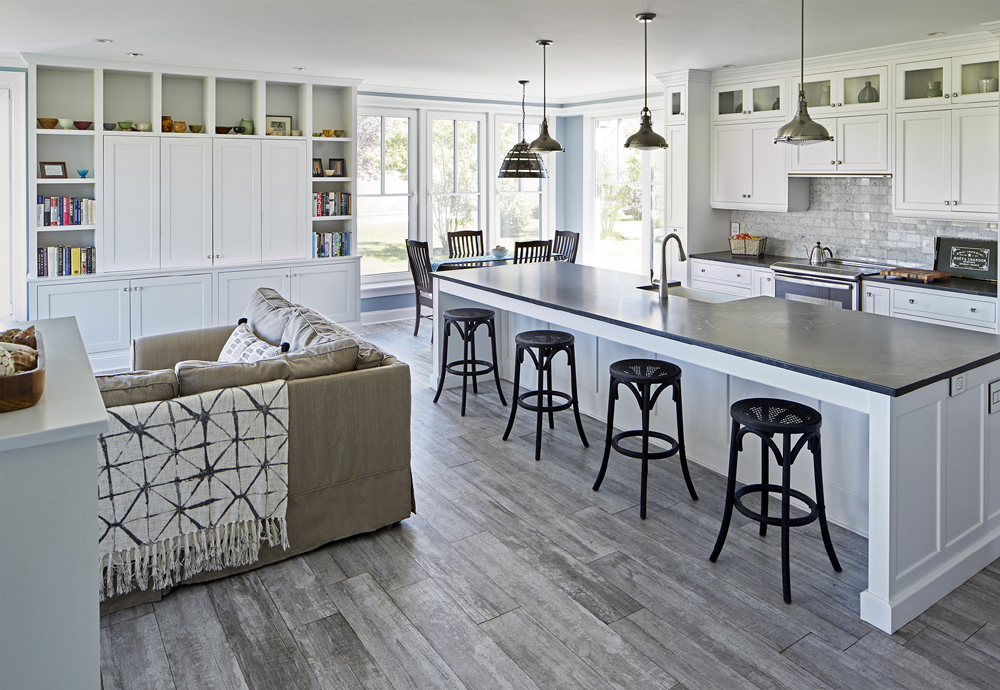 The kitchen and living room, in white and gray with beige and black accents, creates a light but defined living space. The long kitchen island with its soapstone counter is used for everything from food prep and casual entertaining to crafts projects.

Left: Western light and crisp building angles from the roof to the steps make this porch scene simple and classic.

Right: The energy modeling for these solar panels was done by Kaplan Thompson Architects. Tucked in behind the house on a south-facing slanted roof, the panels are surprisingly inconspicuous.

Left: A relative was an accomplished ceramicist, and his work is displayed on shelves and in shadow-box frames throughout the home.

Right: The overall effect of the Shaker cabinets, with their white woodwork and shades of blue accents, is calm and pleasing.

Left: Both homeowners are bibliophiles; their books, clustered by subject, line the walls in well-planned bookcases.