A house outside of time

The Horatio Colony House Museum provides a rare glimpse into the everyday life of one of Keene’s historic families.

If any of us could somehow arrange to have our home maintained exactly as it was at the time of our death, with all the furnishings and artwork left in place, our common everyday surroundings would become uncommon and quite interesting as the years went by. The Horatio Colony House Museum in Keene is just such an example: a house continuously occupied by the same family for 130 years and left intact with its furnishings when its last occupant, Horatio Colony II, died in 1977.

The Horatio Colony House Museum stands on Main Street in Keene in the vicinity of Keene State College and also near the city’s historic Wyman Tavern, built in 1762 and now home to the Historical Society of Cheshire County. The Horatio Colony House, with its yellow-painted clapboard and black shutters, belongs to the New Hampshire State Register of Historic Places.

The house was built in 1806 in the Federal style; but inside, the décor adheres to no one era but rather to the personal tastes of the family that occupied the house from 1847 to 1977. There are tin ceilings, family portraits (including those painted by family members themselves), antique light fixtures, toys, books and much more. Also on display are the extensive collections accumulated by Horatio Colony II during his lifetime—items ranging from paperweights to Eastern religious icons to transfer ware to
cribbage boards.

When he died, Colony left the house and an additional 415 acres of wilderness just to the west of Keene (the Horatio Colony Nature Preserve) to be used as public resources, with oversight by a nonprofit trust. His instructions accounted for the ongoing operation and care of the house and its belongings, with as many items as possible to be left in place. “Most furniture is still exactly where it was,” says the museum’s Executive Director Anita Weldon. These stipulations plus extensive records—“the house is highly documented,” Weldon says—offer visitors and researchers a rare look at what life was like for one of Keene’s most important families during the nineteenth and twentieth centuries. “I like to look at the house as a big, living scrapbook,” Weldon says. 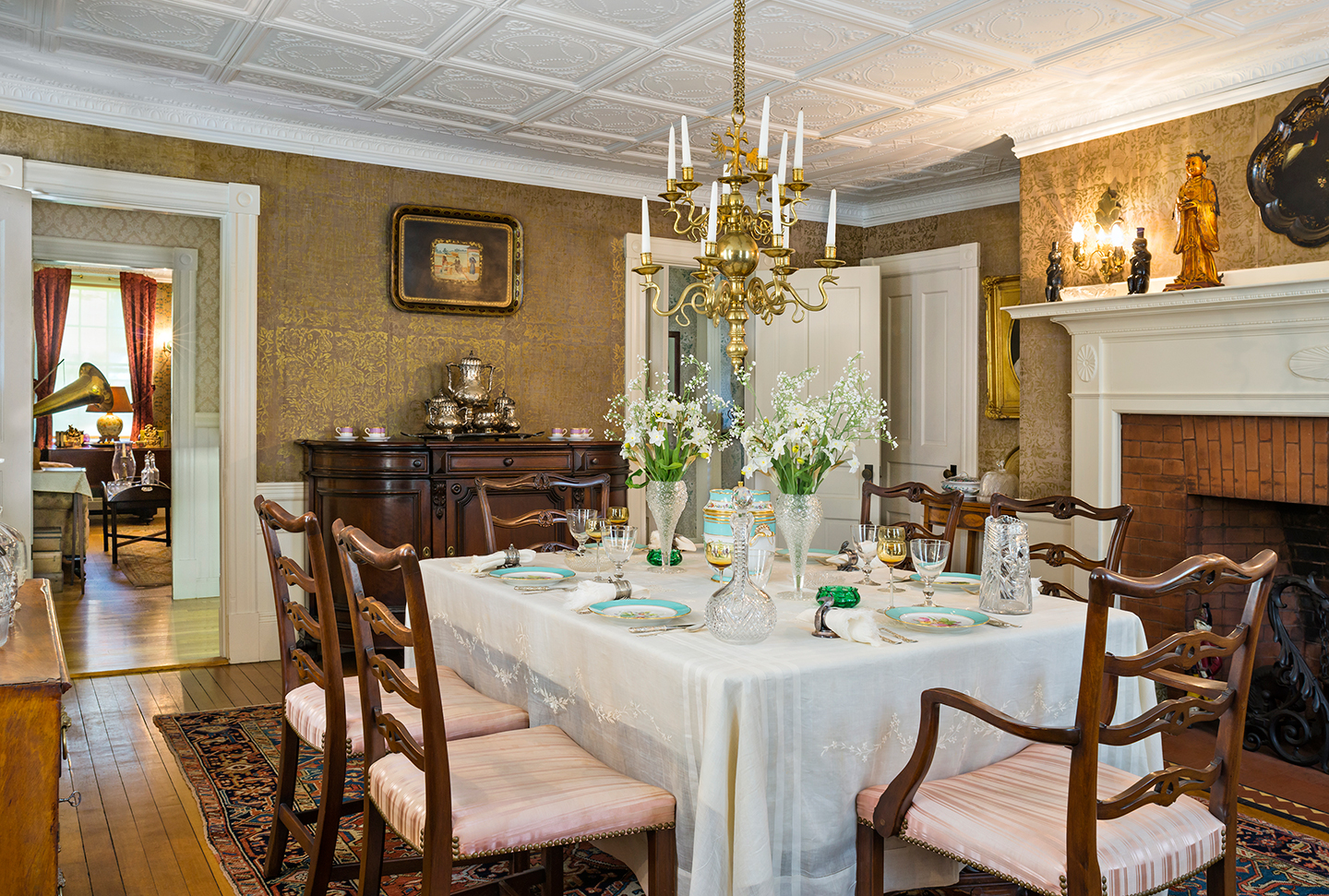 The original kitchen became the dining room during renovations in 1898, at which point a tin ceiling was added.  The extra-large fireplace on the right hints at the room’s former role.

A piece of New Hampshire history

Even if Horatio Colony had not preserved his home as a one-of-a-kind museum, the property would still be an interesting part of New Hampshire history. The Colonys were a prominent family in Keene, arriving in the area prior to the Revolutionary War.

Josiah Colony co-founded the Faulkner and Colony Woolen Mill in 1815. This was a highly successful business that went on to become one of the longest-running family-owned textile mills in the United States, serving the military through World Wars I and II before following the downward path of most of New England’s textile mills: the mill went into receivership in 1953. Keene’s Colony Mill Marketplace now occupies the site. 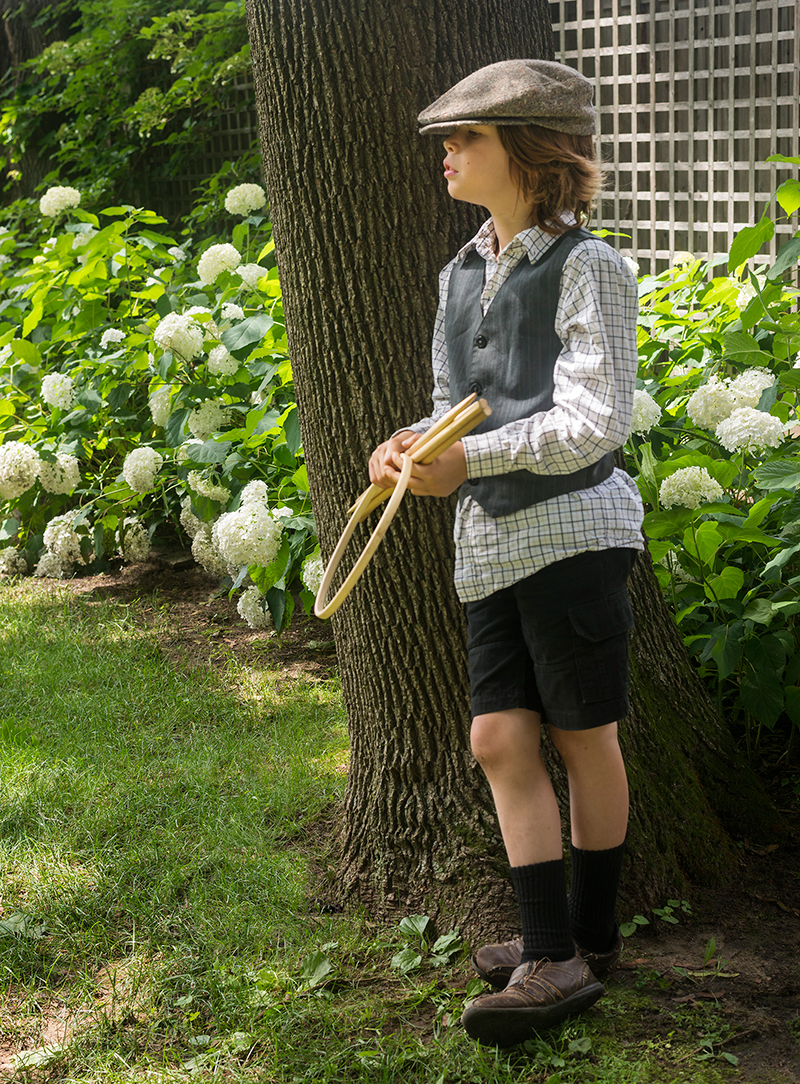 Many activities take place in the museum’s garden when weather permits, including classic children’s games.

The parcel of land where the Horatio Colony House now stands was sold by Nathan Blake, one of Keene’s original settlers of European descent, to his son Abel Blake for $1. Abel built the house in 1806. In 1847, area blacksmith Elias Joslin bought it, eventually leaving the house to his daughter Emeline. Emeline married Horatio Colony I, a Keene businessman who had trained as a lawyer but ended up working in the family mill business. Their son, Charles Taylor Colony, who also worked in the mill business, received the house as a wedding present upon marrying Ellen Warren of Keene. Their son, Horatio Colony II, remained in the house until his death in 1977.

A man of letters

Horatio Colony II was born in 1900. He was raised in Keene and educated at Phillips Exeter Academy and Harvard, spending time traveling abroad before returning to work in the family business. His life had aspects outside the mill; he was also an avid collector and world traveler, visiting thirty-six countries in his lifetime. At the age of forty-six, he married Mary Curtis from Concord, Massachusetts, and they traveled extensively together.

Colony was also an accomplished writer. His novel Free Forester, about frontier life in Kentucky, was published by Little, Brown and Company in 1935. He also published several volumes of verse and two plays.

And he had a great appreciation for nature—both tamed, as in the gardens surrounding his house, and untamed, as evidenced by the Horatio Colony Nature Preserve just outside Keene. The preserve, once a sheep pasture that Colony inherited and allowed to return to forest, now includes 645 acres of woodlands, streams and wetlands, as well as five miles of trails.

A house for the ages

The Colony House’s graceful Federal exterior belies the more eclectic mix within. Victoriana and more recent furnishings share space with antiques, both purchased and handed down. The effect is harmonious and comfortable, more similar to a real home than a museum. A renovation in 1898 included the addition of tin ceilings in some rooms, new oak floorboards and decorative tiles around the fireplaces. Desks in nearly every room are reminders of a time when written correspondence was a daily chore necessary for doing business, paying bills, and keeping up with friends and family.

The formal dining room is one of the most striking rooms in the house, and also one transformed by the 1898 renovation (it was the house’s original kitchen). A clue to the room’s former role is its large fireplace, reworked from a massive kitchen hearth to a smaller but still sizeable incarnation. The table is always set with a collection of American crystal and examples of the family dinnerware. One table setting sometimes on display is a Staffordshire pattern called “Peking” from around 1876. Weldon notes that these dinnerware collections tend to include hundreds of pieces, including ones from the days of grand dining that would not be considered necessities today—a celery vase is one example. The wallpaper in the dining room, as well as in several other rooms in the house, is from the 1950s but harmonizes with the older pieces that predominate the décor.

Next to the dining room is the music room, where the house’s occupants could amuse themselves with instruments such as the mandolin, which Colony played. The music room also has an excellent example of a Graphophone, an improved version of the earlier phonograph, which played music recorded on wax cylinders.

In the comfortable parlor, the fireplace is framed by Delft tiles. A centerpiece of this room is a mahogany Chippendale chest that Colony inherited from his grandfather. Also in the parlor are some of the items that make the Colony House so interesting on a personal level: wall sconces that have electric lights on the bottom and gas lights on the top. These “combination” fixtures are a reminder that once upon a time, the ubiquitousness of electricity was not a given, and sometimes people hedged their bets by having both electric and gas lighting on hand. The combination of gas and electricity in the same device proved to be unstable and dangerous, however; surviving examples of these types of fixtures are rare, Weldon says.

One of the four bedrooms upstairs was used by Colony’s mother, Ellen. It features a canopy “plantation-style” bed from Jamaica, hand-carved in solid mahogany. The coverlet is a fine example of candlewicking, a white-on-white motif in which embroidery thread is knotted on a bed cover in decorative fashion. This room also contains an antique baby carriage Colony used as an infant. 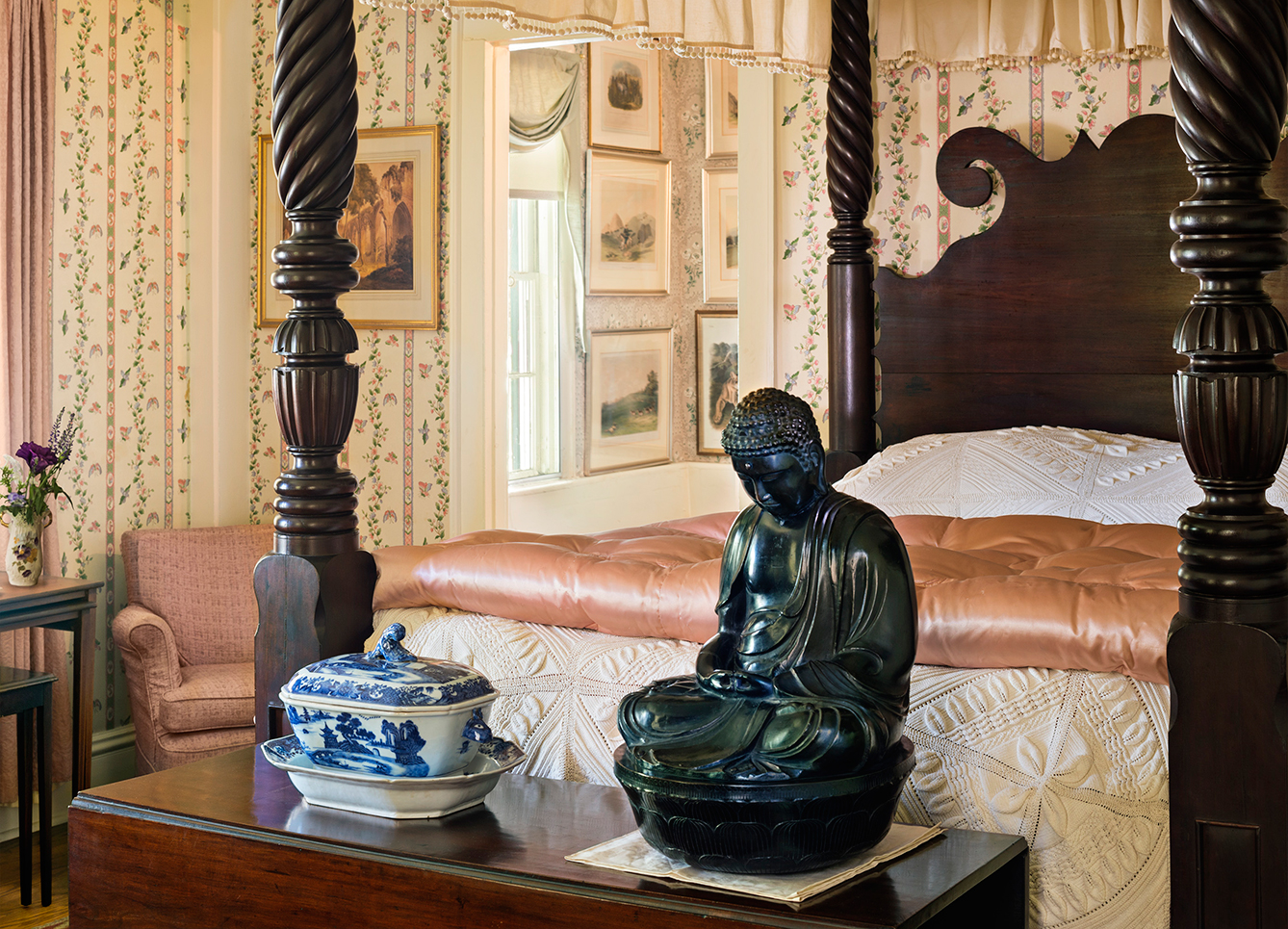 Horatio Colony’s wife Mary’s room features a hand-carved bed and a statue of Buddha, one of many in Horatio’s collection.

Other upstairs rooms include a guest room with tiger maple furnishings and Colony’s room, with a bed made in 1876 to commemorate the United States’ centennial. This room also includes some favorite teddy bears from Colony’s collection.

Of particular interest to him, as evidenced by the many examples around the house, were sacred images from Eastern religions. Colony was fascinated by these religions and particularly the artistic impressions based on them. Weldon says, as far as can be determined by journals and other paperwork, his interest was more scholarly than participatory.

At any given time, examples of Colony’s collections can be viewed in the house, either as decorative elements in the various rooms or as part of rotating displays.

Before the 1960s, when some of the land was acquired by Keene State College, Horatio Colony’s property extended back almost to the next block. The garden included fifty-two lilacs and numerous formal perennial beds.

Today, the three-quarter-acre site includes Norway maples (planted after the Hurricane of 1938), mock orange bushes and a ring of ferns around the house that were originally planted by Colony, an avid gardener. The museum has also since planted heirloom varieties of roses, hydrangeas, honeysuckles and peonies that would be in keeping with those that might have been planted in Colony’s time.

The garden is the site of many warm-weather activities, including old-fashioned children’s games, candlelight croquet, gardening workshops, weddings and other events. The garden and museum are open Wednesday through Sunday, May 1 through October 15, and by appointment at other times. The Nature Preserve is open year-round, dawn to dusk. Both museum and nature preserve are free of charge, thanks to a very special man who left to the city of Keene, and New Hampshire as a whole, a special look at times gone by.