A house that blends old and new

A Bedford couple redesigned a house to suit their needs while retaining its original spirit. 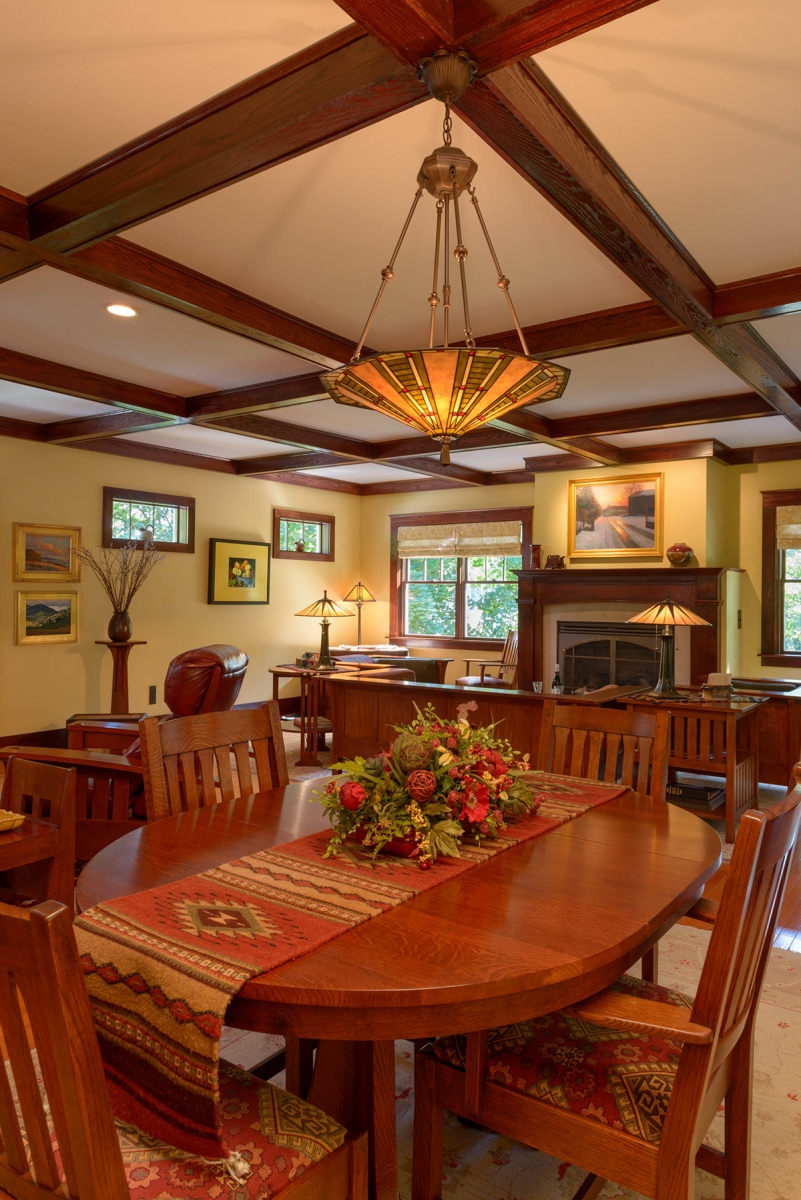 The family room, added in 2005, has an Arts-and-Crafts sensibility that blends with the rest of the house. Cynthia Shreve of Cynthia Shreve Interiors in Derry helped with interior design.

Some new homeowners tackle redesigns at a gallop: they move in and put their own stamp on the house immediately. Not so Richard and Paula Pease. In 2001, the couple moved into a 1930s Colonial-type farmhouse in Bedford, and began slowly and steadily to make changes, one room at a time.

During the last fourteen years, Paula estimates that each of the rooms in the house has been redone at least once. In 2005, the couple made an addition—a new family room—to the structure. “We’re very mindful of the legacy of the house,” Paula says, “while, at the same time, we want it to fit our needs.”

Chief among those needs was a place where family and friends could gather, and that could scale to accommodate big parties or very intimate ones: “We seem to have two people over or very large gatherings,” Paula says. “We also wanted a kind of sanctuary for ourselves.”

In addition, the Peases had some very specific design needs based on their collections, which range from art to military hero memorabilia to signed cookbooks. Many of the collectibles are from the thirty-nine countries Richard and Paula have visited so far.

The eight-room farmhouse the Peases moved into fourteen years ago was originally owned by Freeman and Babe Shaw, who grew up in the house across the street. Freeman’s mother gave him the land in the 1930s; in part because he remembered it fondly as the site of a church tent revival. (Around 2005, the Peases invited the Shaws, then in their nineties, to visit the house. It was the first time they had been back in the home for many years.)

The house is 2,700 square feet (including the newer addition) and sits on approximately five acres, including an orchard and protected wetlands. A special feature of the property is its outdoor living amenities—a pool, a patio, an outdoor kitchen, a hot tub, seating areas and a gas fire pit. Landscaping and container gardens help blend the elements with their surroundings.

Something Paula noticed early on was that the Queen Anne– and Chippendale-style furniture that had worked well in their former home didn’t seem to fit the new one—or their lifestyle—in the same way. She and Richard wanted something easier, less formal. And they wanted furnishings that looked at home in the house.

Helping out in that regard was Cynthia Shreve of Cynthia Shreve Interiors in Derry. Her first project with the Peases was the library: an L-shaped room they reconfigured and furnished with bookcases at the time the family room was added on (the non-library part of the L is a living area with a piano). 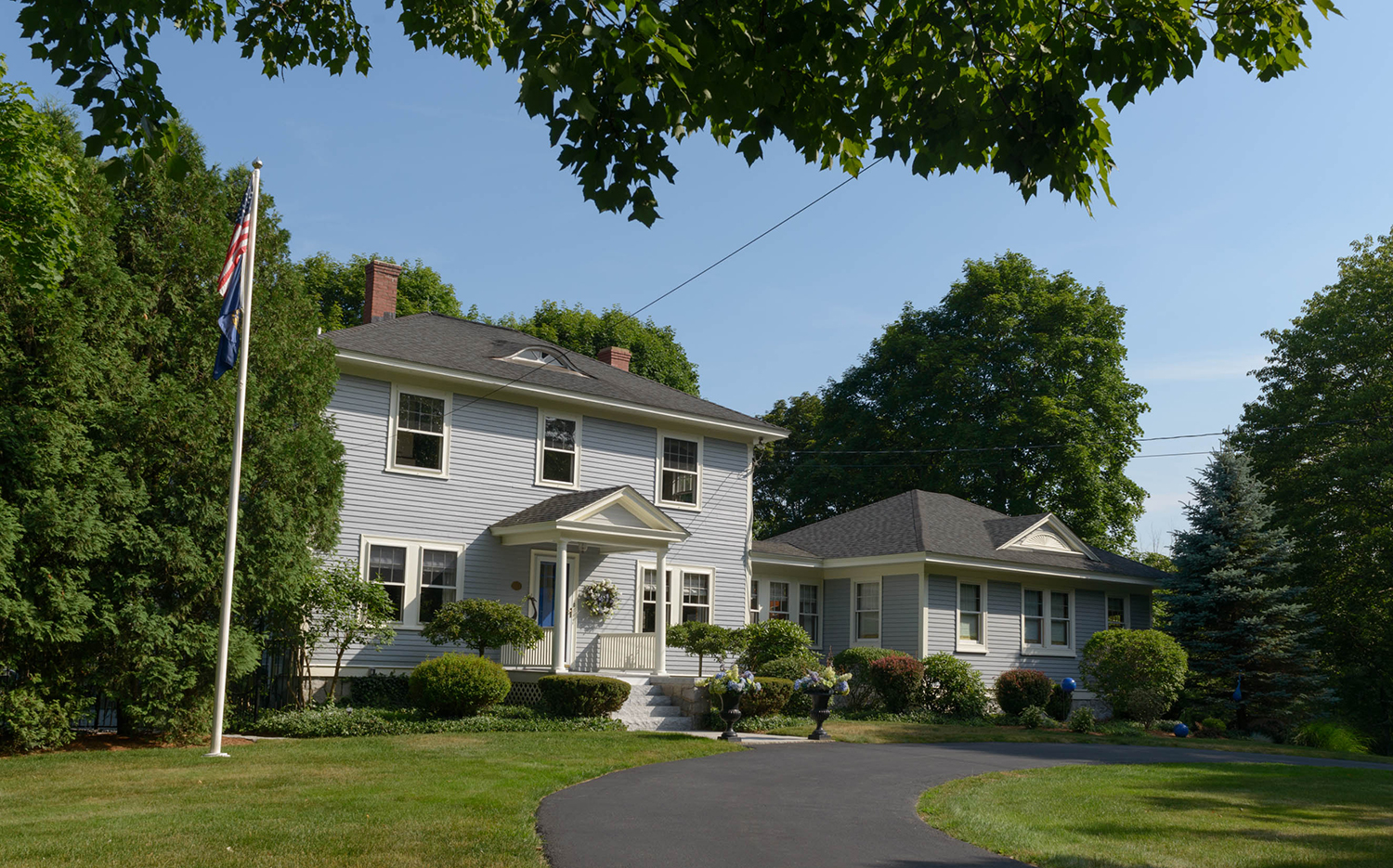 The Peases’ 1930s home has an addition (at right) with lines that harmonize with those of the original.

The focal points of the library, of course, were the books and memorabilia, but Shreve added two red, leather chairs on an oval rug to give the room warmth and a bit of color. She believes the library is somewhat Victorian in design and feel. “I do love the ambiance of the library,” Shreve says. “I like the color and feel of it, and I think it reflects the owners’ passion for collecting.”

In that room are Richard’s collected autographs of all the U.S. presidents as well as Paula’s collection of cookbooks signed by their authors, including Julia Child and Ina Garten, who’s also known as the Barefoot Contessa.

The large family room (twenty-four feet by twenty-six feet) the Peases added in 2005 is beautiful and gracious, with dark oak trim, a ceiling coffered in oak and walls painted a warm yellow. In adding this room, the couple strove to create a space in keeping with the rest of the house—comfortable and elegant, but not fussy.

The couple also had to cooperate with each other. “We were challenged by the style because it was going to be a merger of our tastes,” Paula says. “I leaned toward the more traditional and formal. Richard’s tastes were more casual.” They found common ground in the work of architect Frank Lloyd Wright. Richard had always loved the Wright room at the Metropolitan Museum of Art (a living room from a prairie-style house in Minnesota), and that served as a reference point they could agree on. So they arrived at an Arts and Crafts–influenced style for the room, with Stickley furniture as well as upholstery and accents that lean to the geometric rather than the floral or frilly.

Another requirement for this room was that it provide flexibility in terms of entertaining. The Peases wanted a space that two people could enjoy without feeling lost but that would expand to include larger numbers. The result is a room that includes a cozy spot in front of the fireplace that is just right for a small group, but is large and open enough when combined with the library area to accommodate up to forty people, with some of the furniture moved out of the way.

There is also a dining area in the family room (and the house has a separate dining room). Another example of cooperation between Richard and Paula is a custom-designed wooden television cabinet in the family room that functions as an attractive piece of furniture on its own. (He is fond of TV, but she didn’t want it to be visible at all times.)

This Arts and Crafts–influenced family room attaches to the piano room and Victorian-influenced library, but it all works together beautifully. “The design is eclectic,” Shreve says. “But through the use of material and colors in the house, we have pulled it all together.” 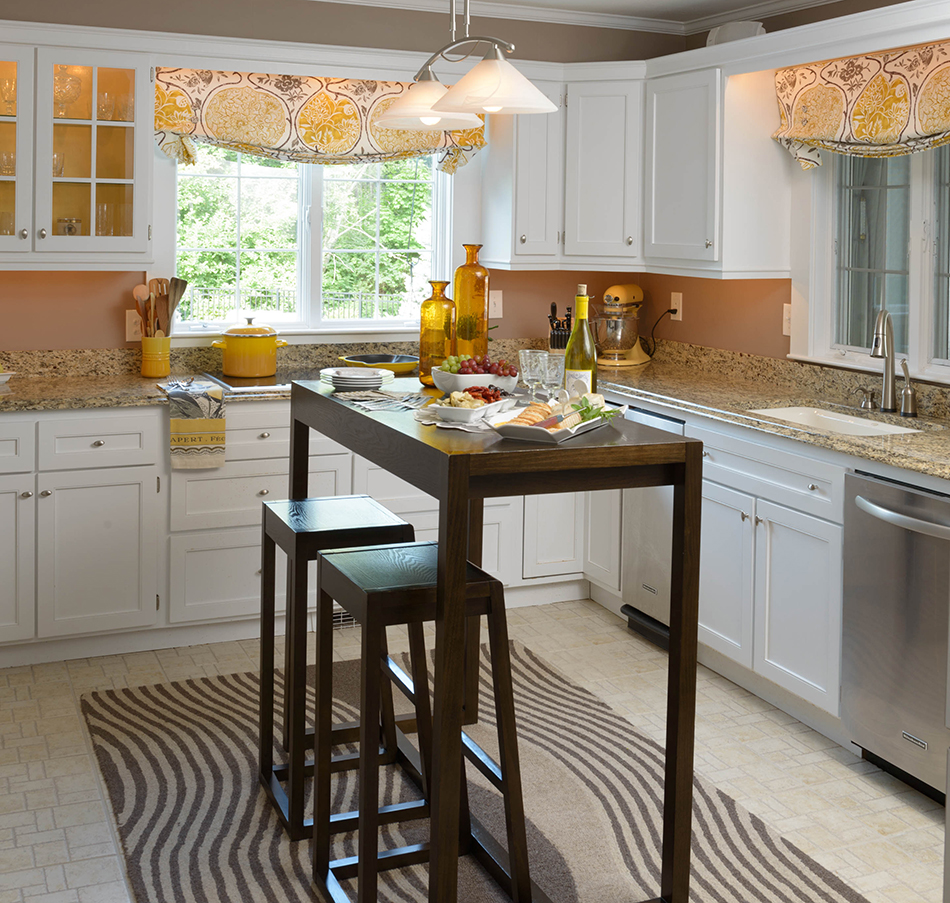 The airy kitchen has a center table for in-room dining or additional workspace.

Another unifying element is the oak flooring, restored and refinished in the original parts of the house, and stained to match in the new.

Shreve also helped reconfigure and redesign the couple’s master suite upstairs. The gray and white room is decorated with red accents in colder seasons and periwinkle blue in warmer ones. For summer, Shreve designed a white linen slipcover with black piping for the wingback chair in the bedroom; it’s covered in red velvet in winter. The bedding gets changed out with the seasons as well.

The large master bath area, which includes a walk-in closet and a steam shower with lights and music, is tiled and painted in neutral shades of beige and gray. It’s a serene space, and Paula is particularly satisfied with the way Shreve streamlined a space that was broken up and less aesthetically pleasing before.

Upstairs is also what the family has dubbed “the War Room”—not a place where they plan to conquer the world, but a home for Richard’s one-of-a-kind collection of world-leader and war-hero memorabilia. Shreve and cabinet maker Denis Lamy of Innovative Woodworking in Manchester collaborated to design this special space. The walls are covered with autographs and other ephemera from great leaders of both World Wars, even some from Napoleon, Wellington and Nelson.

With a collection this extensive, it can be hard to decide what to display, and to that end, Lamy (who did all the woodwork in the room) created an ingenious series of pull-out wooden panels that display pieces of the collection. The vertical panels, which are designed along the same basic principles as barn doors, slide in and out of the walls at either side of the room’s window seat. Each vertical panel encases a metal plate between two pieces of wood. Richard can then attach pieces of his collection with magnets, which gives him freedom to rearrange what he has on display and how it’s displayed. Drawers and shelves elsewhere in the room make it a dream space for a collector.

Downstairs, at the other end of the house from the family room and library (and a small sun room off the library), there is a sunny kitchen painted white, with accents of taupe and yellow. A tall center table with stools provides a workspace as well as a spot to have a meal. The kitchen looks out to the pool—an ideal setup, Paula says, for keeping an eye on grandkids when they became old enough to swim without direct supervision. 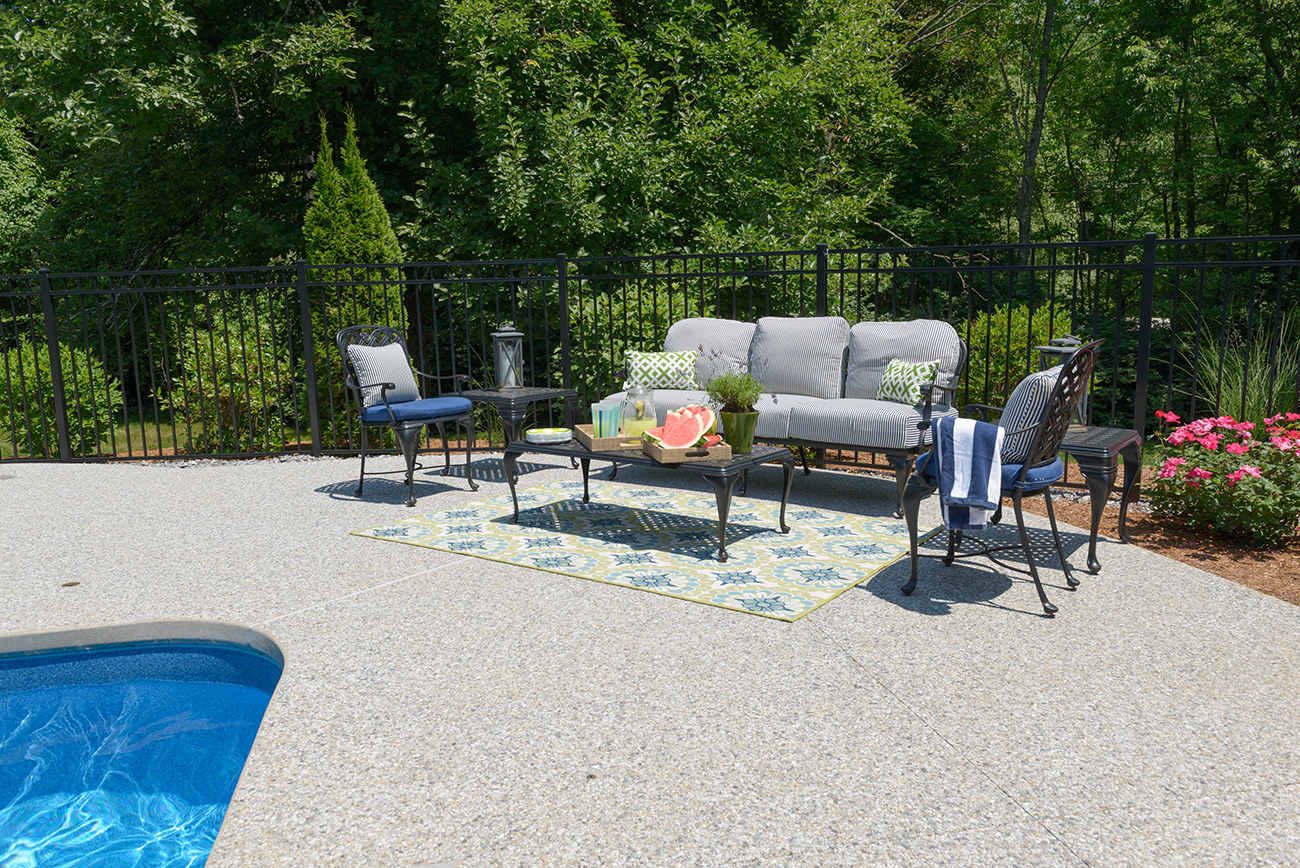 Outdoor seating by the pool adds additional living space for the Peases when the weather is warm.

The pool area is an important part of family life in the summer: “I think of it as another addition,” Paula says. The pool was built by Blue Dolphin Pools & Spas of Bedford, and the hardscaping was designed and installed by Triad Associates of Haverhill, Massachusetts. Bedford Fields Garden Center, with a location near the Pease home in Bedford, was the source for the container gardens, all the outdoor furniture and the grill.

The numerous container plantings soften the hardscaping around the pool and complete the sense of a retreat.

Paula and Richard planted two three-by-eight-foot garden beds, and much additional landscaping was done by Joe Gauci Landscaping of Bedford. Joe Gauci created an herb garden and a fairy garden for the Peases, and installed various other plantings. He says he tried to use low-maintenance varieties that would provide maximum visual impact, including arborvitae along the fences and Colorado blue spruce. He planted Korean spice viburnum, which he is particularly fond of because it provides a strong floral scent that can be enjoyed when people spend time outdoors, as the Peases do. He also planted fragrant Korean dwarf lilacs. “I try to use flowering bushes and shrubs with a lot of fragrance,” he says. “Sometimes you can smell them one hundred feet away.” He also planted knock-out roses, which he likes for their low maintenance and generous blooming. “They keep flowering for a long time,” he says. “Sometime they even have a second flowering.”

Today, although the Pease house sports a pool and an addition, it doesn’t look drastically different from the New England farmhouse that it began as, thanks to Paula and Richard’s thoughtful, one-room-at-a-time approach.

And work is ongoing. Just last winter, the dining room was redesigned from a formal look to a simpler one now, including two beautiful paintings based on family photographs by South Boston artist Beth Dacey.

It’s all a work in progress. “It takes a while to find the right solution,” Paula says. “We had to live in this space a while, and figure out what we wanted and how to do it while still honoring the history and personality of the house.”