A House with Secrets

Although it helped provide inspiration for a classic murder-mystery game, the “Clue House” in Peterborough is bright, spacious and welcoming. 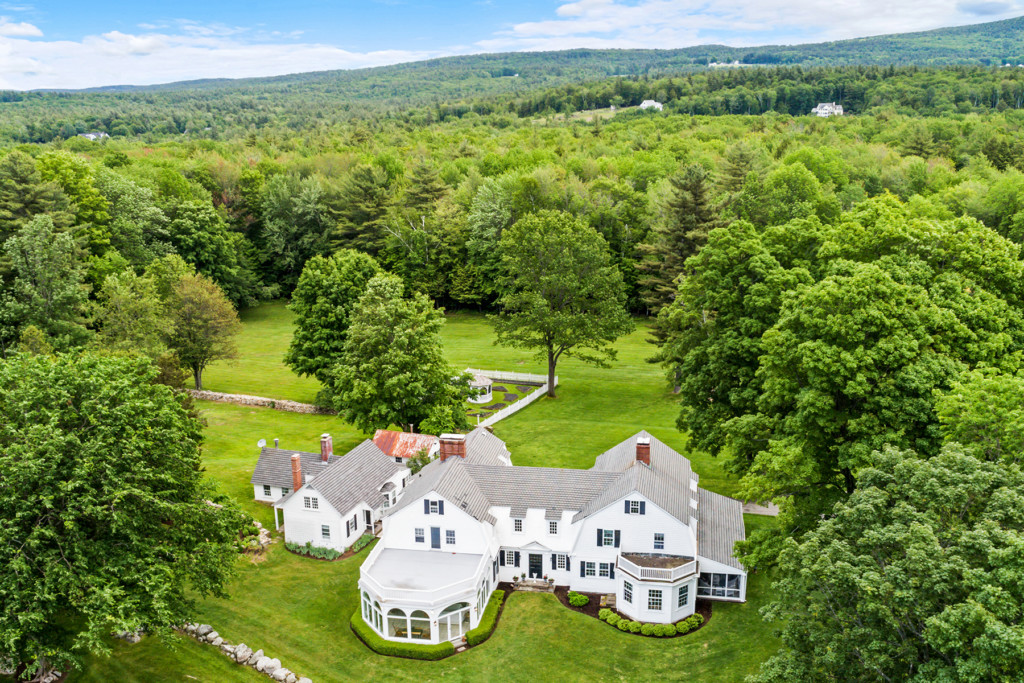 Peterborough’s “Clue House” is a Dutch Colonial with incredible views and ties to the famous Parker Brothers game company.

The Peterborough property where Jim and Maryann Walsh live is a stunner at first glance. The house—a gracious, two-story Dutch Colonial—stands on 19.1 acres of forest, lawn and gardens, with spectacular views of the surrounding Monadnock Region. But there’s even more than meets the eye. To begin with, the house combines a Cape built on the property in 1790 with interior architectural woodwork brought north from an even-older sea-captain’s home in Salem, Massachusetts. Next, the house was formerly owned by George Parker, of the Parker Brothers game company, and provided inspiration for the American version of the classic board game Clue. (George and his wife Grace rescued the woodwork from the sea-captain’s quarters, which had been the Parker family home.) Last but not least, there are secret passageways!

Given the association with a murder mystery board game (“Colonel Mustard did it in the library with the candlestick”), you might expect the 5,900-square-foot house (plus guest house) to be gloomy and mysterious—but, in fact, it is cheerful and generously illuminated with natural light. Its twelve rooms even include a tile-floored solarium with windows on three sides that the Walshes call “the Mountain Room” because of its spectacular view of Mount Monadnock. 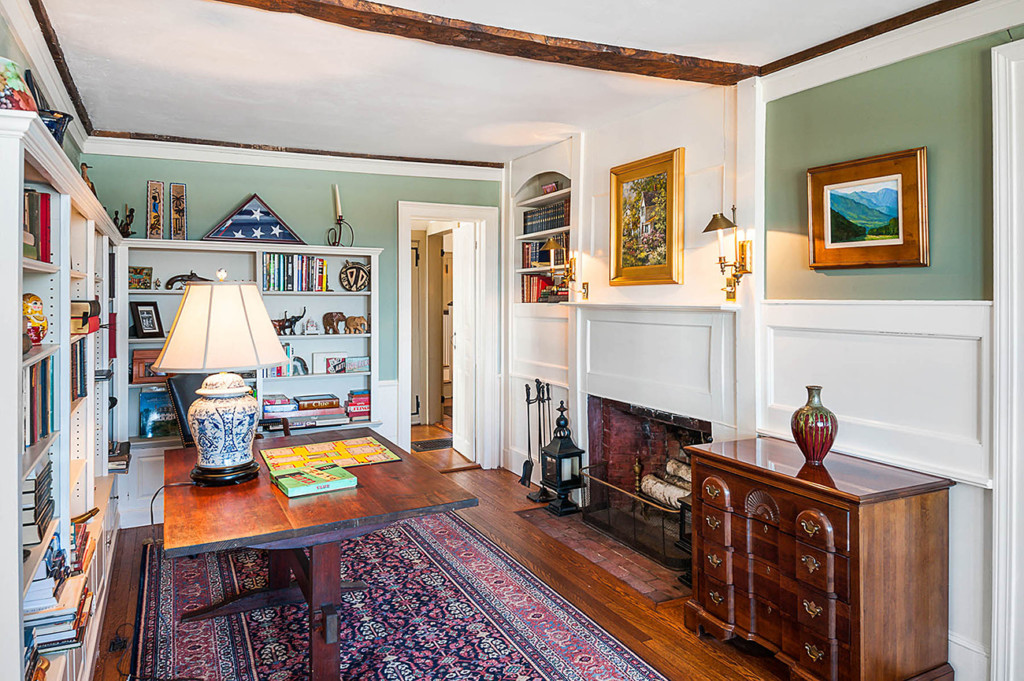 The table belonged to George Parker.

In 1925, George Parker—who founded his highly successful game company in Massachusetts—bought the property on top of a hill in Peterborough and enhanced the existing house using the fine interior woodwork from his family home in Salem, the 1700s Watson-Parker house. This historic house was torn down to make room for the parking lot of the Hawthorne Hotel, which is still operating. A highlight of that transferred woodwork is the house’s beautifully fluid 1769 carved wooden staircase, made by Salem’s Samuel McIntire, a renowned master carpenter.

George and Grace lived in Peterborough for approximately three decades, during which time the local children enjoyed some Parker Brothers largesse. “George Parker was a neighbor of ours when I was growing up,” says Peterborough realtor Andy Peterson, “and we used to get games from him, with rubber bands around them.” In fact a number of local children received games from Parker around Christmastime. “You’ll still find a number of old Parker Brothers games at local yard sales,” Maryann says.

It was while Parker was living in Peterborough that his company acquired the U.S. license for Cluedo, a murder-mystery game designed in England. The North American version of the game, launched as Clue in 1949, featured a gameboard inspired in part by the Peterborough estate where Parker was living. While the “floor plan” of the game doesn’t follow that of the house (it has to function as a gameboard, after all), the details of the rooms—such as the bumped-out library windows, the chandelier over the dining room table and especially the secret passageways— link the game to the house. 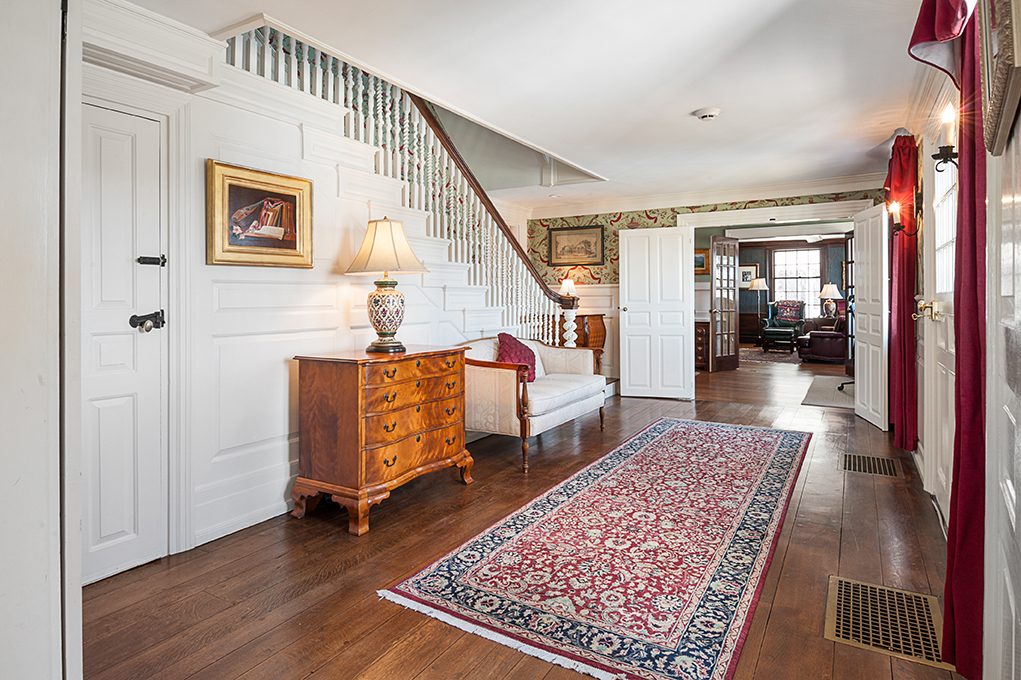 Fine 1700s woodwork from Salem, Massachusetts, gives the interior of the house a feeling of grace and refinement.

The Parkers lived in the house until the early 1960s, after which it had several owners. In 1991, Jim, a businessman from Ohio, bought the property. The initial draws for him were the amazing views and the unique history. He was intrigued by the house’s storied former occupant and its association with the Clue game. He learned more when he was lucky enough to make the acquaintance of the Parkers’ former caretaker, Warren Craig. Craig, who has since passed away, shared many stories about the Parkers and the property. Jim was especially impressed when Craig was able to solve the mystery of how the property’s numerous outdoor spigots and fountains could be turned on and controlled. Craig told him there was a junction box buried in a certain location on the grounds. The family began digging with some dubiousness—until the shovel made contact. Having located the box, they were able to call in a plumber and get the whole system working again. Without Craig’s memory and guidance, they never would have found that junction box, says Jim, noting that there were many other aspects of the property that Craig was able to explain. “His contributions were huge,” says Jim.

Craig also gave the Walshes some very special mementoes—an original architect’s rendering of the house from the 1920s and a small drafting table that Parker used to sit at when he worked on his games. That table stands in the parlor; on it is one of the original Clue boards, obtained by Maryann, who also shares Jim’s fascination with the house’s history. She has collected old versions of Clue and other classic Parker Brothers games (such as Monopoly), both locally and via the Internet.

After moving in, Jim redid virtually all the flooring, removing the existing wall-to-wall carpet to reveal the original quarter-sawn floorboards. Over time, he also painted and restored the interiors, while preserving details of the old house—not only the fine woodwork, but the exposed beams and the horsehair plaster ceiling in the billiard room.

The main floor holds a living room; a library; a billiard room (Jim added the table because it was only fitting that the house, like the game, have a billiard room); an exercise room; a parlor; a kitchen with dining alcove; a pantry the Walshes like to call “the butler’s pantry,” after one of the murder suspects in the game; a screened-in front porch; a solarium (which, though added in the 1980s, could be considered “the conservatory,” with all its windows); and a spacious dining room. The dining room is particularly impressive, with cream-painted Salem woodwork, including windows with pocket shutters. The center hall has the original, massive wooden front door from the Salem house.

Upstairs, there are six bedrooms, including a master with a deck that has a view of Mount Monadnock and another with a sleeping porch. The guesthouse has an additional four bedrooms.

Both Walshes have their favorite parts of the house. Maryann says hers are the library, especially in winter when the fireplace is lit, and the Mountain Room. This octagonal room was added in 1985 by a previous owner and includes a bar, tile floor and windows to spare, providing the feeling of being outdoors while inside. “Especially in cold, dark New Hampshire winters, it’s a kind of ‘therapy’ room, because it’s just so bright,” Jim says. His favorite room is the screened-in porch, where he likes to relax and watch nature. 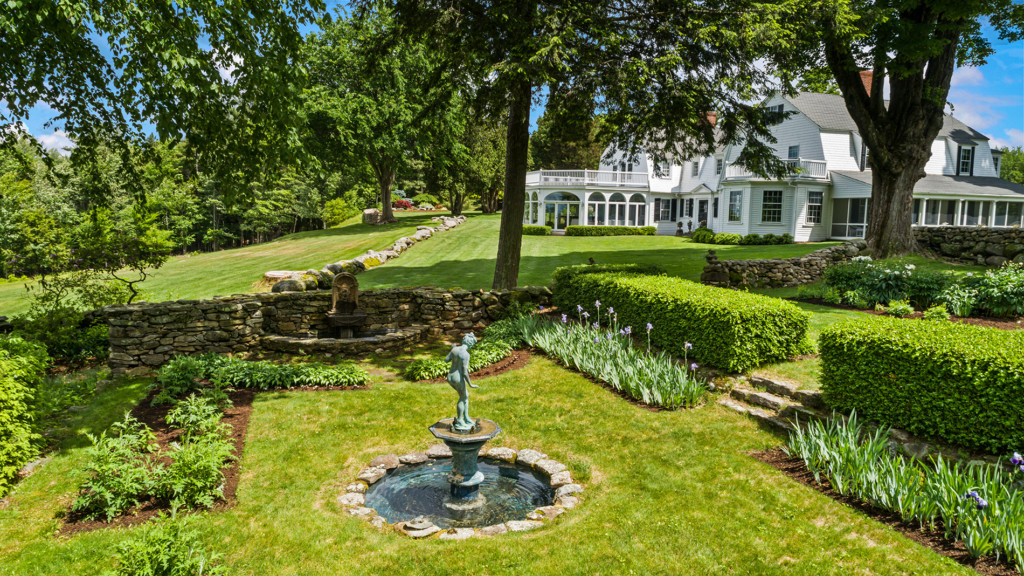 Many of the gardens, including fountains and statues, date back to when George and Grace Parker owned the property.

The house is beautifully designed for entertaining, the Walshes say. “There’s enough room for everyone to have their own separate space,” Maryann says. The outdoor setting—spacious lawns surrounded by visual elements, such as fountains, statues and gardens—has made it ideal for family weddings over the years.

Now, about those secret passageways. They really do exist under the floors between several of the rooms, and they are big enough for an adult to pass through. When Jim’s children were young, they explored these passageways under the house. Jim is not sure what their purpose was, but they definitely add an additional layer of fun and
mystery to the house.

When Jim bought the house in the early 1990s, he removed a great deal of surrounding overgrowth. “There were hundreds of feet of rock walls that I didn’t even know existed because they were covered in bittersweet,” he says. He incorporated swathes of lawn that are pleasingly punctuated by boulders and rock ledges. Although the rock features look as if they were designed to be there, Jim says it’s more accurate to say they were designed around. In addition to the waterfalls and fountains on the grounds, there is a great deal of statuary dating back to the Parkers, providing visual interest and a sense of history.

Maryann, initially overwhelmed by the sheer number of gardens on the property, eventually did some simplifying. Master gardener Maude Odgers, of The Artful Gardener in Peterborough—who was helping Maryann—suggested that the view should be the focus for the landscaping, allowing Maryann to take a more holistic view of the overall setting and retain just those elements that supported the view. Among the current gardens are a rose garden with bushes dating from the 1930s; a vegetable garden with raised beds of rhubarb, tomatoes, nasturtiums, and other vegetables and flowers; a Japanese-
influenced garden; and an impressive three-terrace installation. Plantings include irises, echinacea, astilbe, globe thistles and impatiens. Wisteria grows on a pergola in the terraced garden.

One of the showpieces of the grounds is a weeping ‘Sargentii’ hemlock—quite large and quite symmetrical. “It was very common for people to plant these trees on estates in the early 1900s,” says Maryann, explaining that since most of these estates have since been developed, their specimen is a rare holdout that has been permitted to expand wonderfully. 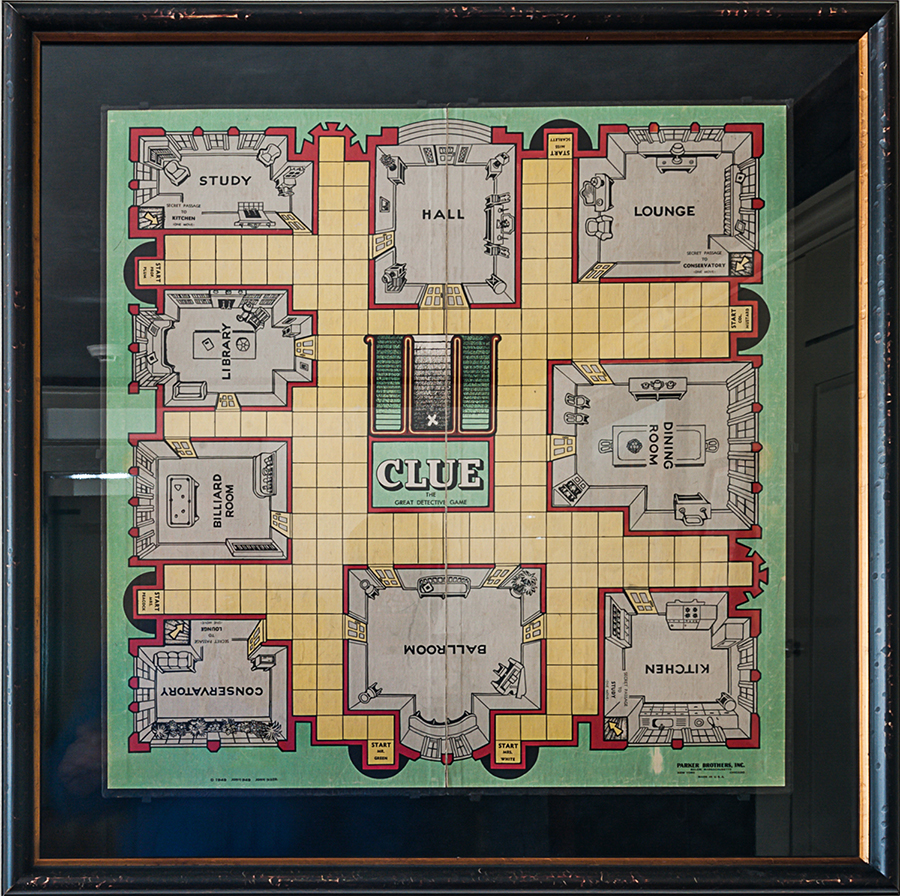 Maryann Walsh has collected examples of original and early-edition Clue games, including this framed game board and the board that sits on the drafting table in the parlor.

Although the view from the property is outstanding—Mount Monadnock, Mount Wachusett and Mount Skatutakee are among the visible peaks, as well as the church steeples from Dublin and Hancock—it is actually less expansive now than when the Parkers lived there. This is because many of the cleared fields in the surrounding region have gone back to forest. “Craig said that back in the ’30s and ’40s, you could see Mount Washington from here,” Jim says.

Games in the house

Peterson thinks the house and its history are a jewel in the crown for the area. “Anywhere in the world, if you mention Monopoly and Clue, and the Parker Brothers, people know what you were talking about,” he says. “This house ennobles Peterborough.” 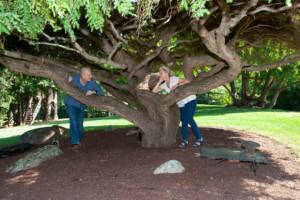 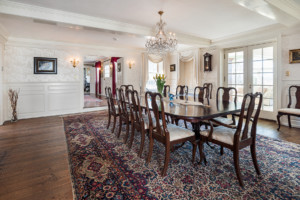 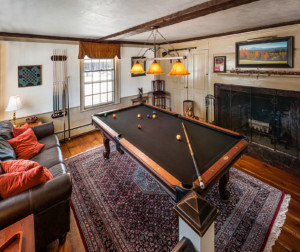 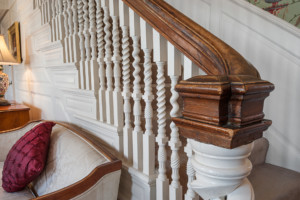