A Jewel of A Small Kitchen

This beautifully crafted room will be featured on The Music Hall’s Kitchen Tour on May 13, 2017. 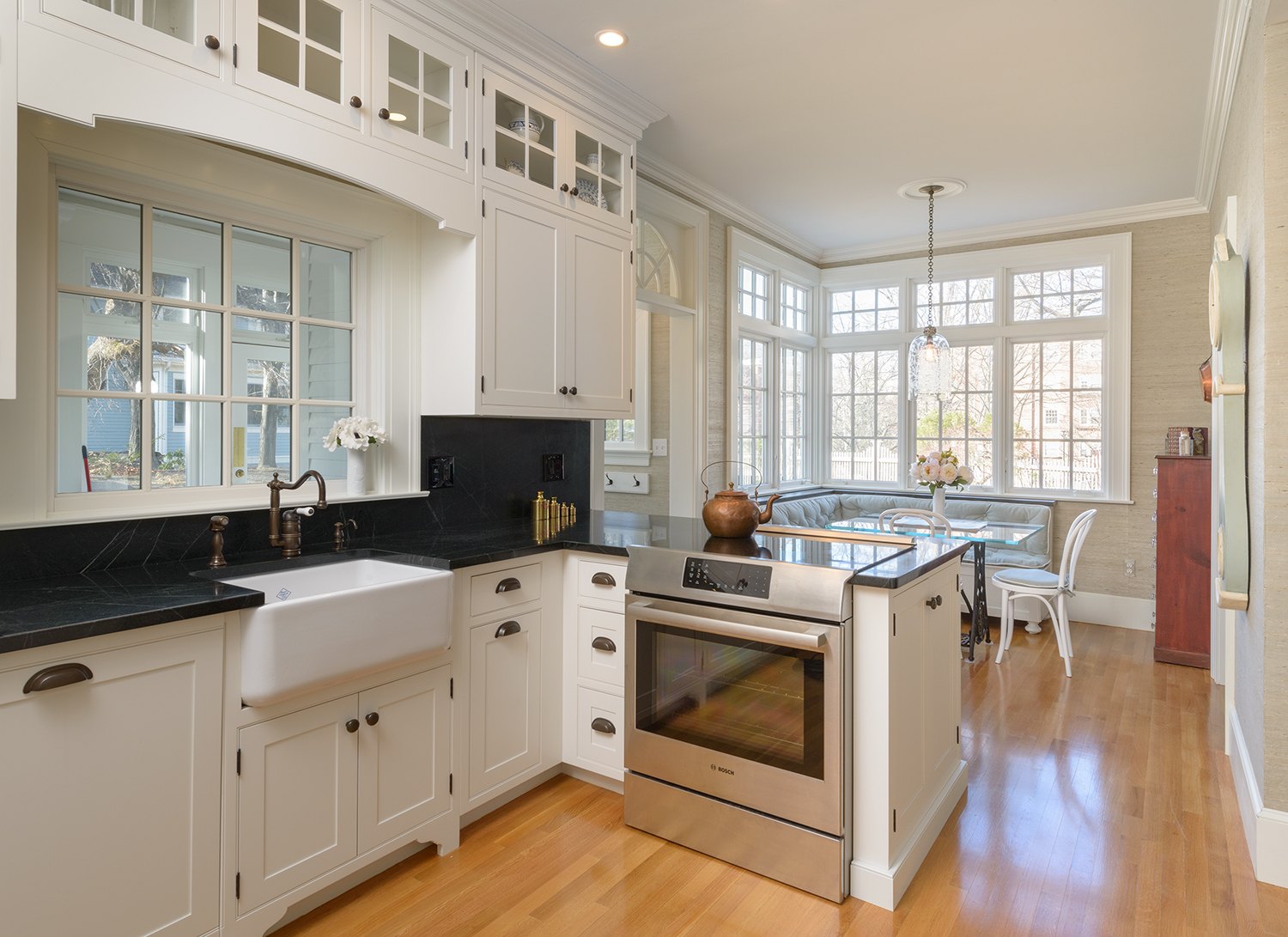 A small kitchen is often a great chef’s secret. Having everything close at hand is efficient and highlights the need for precise organization. But it’s quite a feat to create a small kitchen that feels airy, spacious and cozy while complementing both a Victorian home and an Asian aesthetic.

When homeowners Ann Wissink and Doug Adams moved to Portsmouth three years ago, they took one look at the kitchen in their new home. Having renovated homes before, the couple knew it needed an overhaul. First, they did Internet research. Then while exploring downtown Portsmouth, they saw a sign for Dovetailed Kitchens, Inc. outside the old City Hall on Daniel Street and sauntered into the showroom. Soon, they were chatting with kitchen designer Scott Purswell.

“We liked his work and enjoyed talking with him,” Wissink says. “So we went from there.”

A seasoned kitchen designer, Purswell built a team that included K & S Contracting of Portsmouth (Daryl Kent and Bruce Schlieper); carpenter Matt Pucko of York, Maine; and other trusted companies that Purswell has done business with for years. 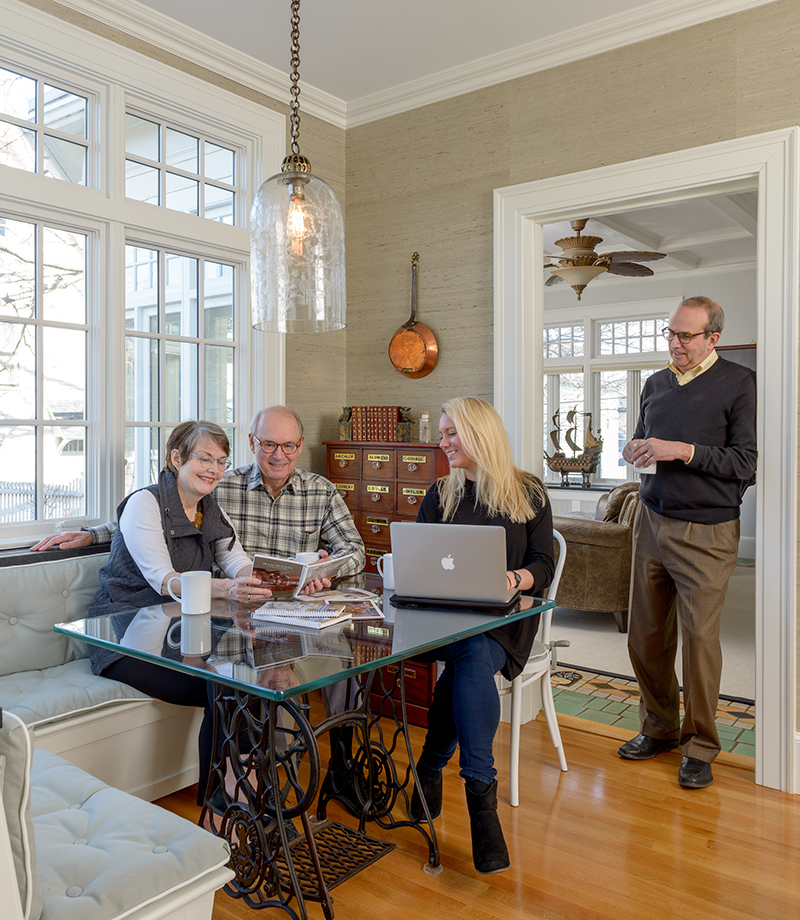 “Sometimes the limitation of space drives the creativity,” Purswell says. “Those challenges can bring out your best work.”

The kitchen was completely gutted. A thick, curved, 1940s decorative lath made of concrete and metal swept around the ceiling’s perimeter. Taking it out was a big undertaking.

Schlieper still marvels at the lath’s staying power. “Over the years, we’ve developed ways of working with that stuff,” he says. “And, in an old house like that, prep work is critical.”

The original house, circa 1875, was built as a single-family home by a successful milliner, a maker of ladies’ hats and fancy goods. A major remodeling took place in 1891 with a local architect. The house went through several owners and families, each adding their improvements: a sun room, porches and additions. During World War II, as Portsmouth’s Naval Shipyard ramped up production and housing was in short supply, the house played a role in solving that problem by becoming an apartment house. For a time in its history, it was known as Miller Apartments.

In 2015, as part of the kitchen renovation, K & S Contracting updated the plumbing and electrical as required. 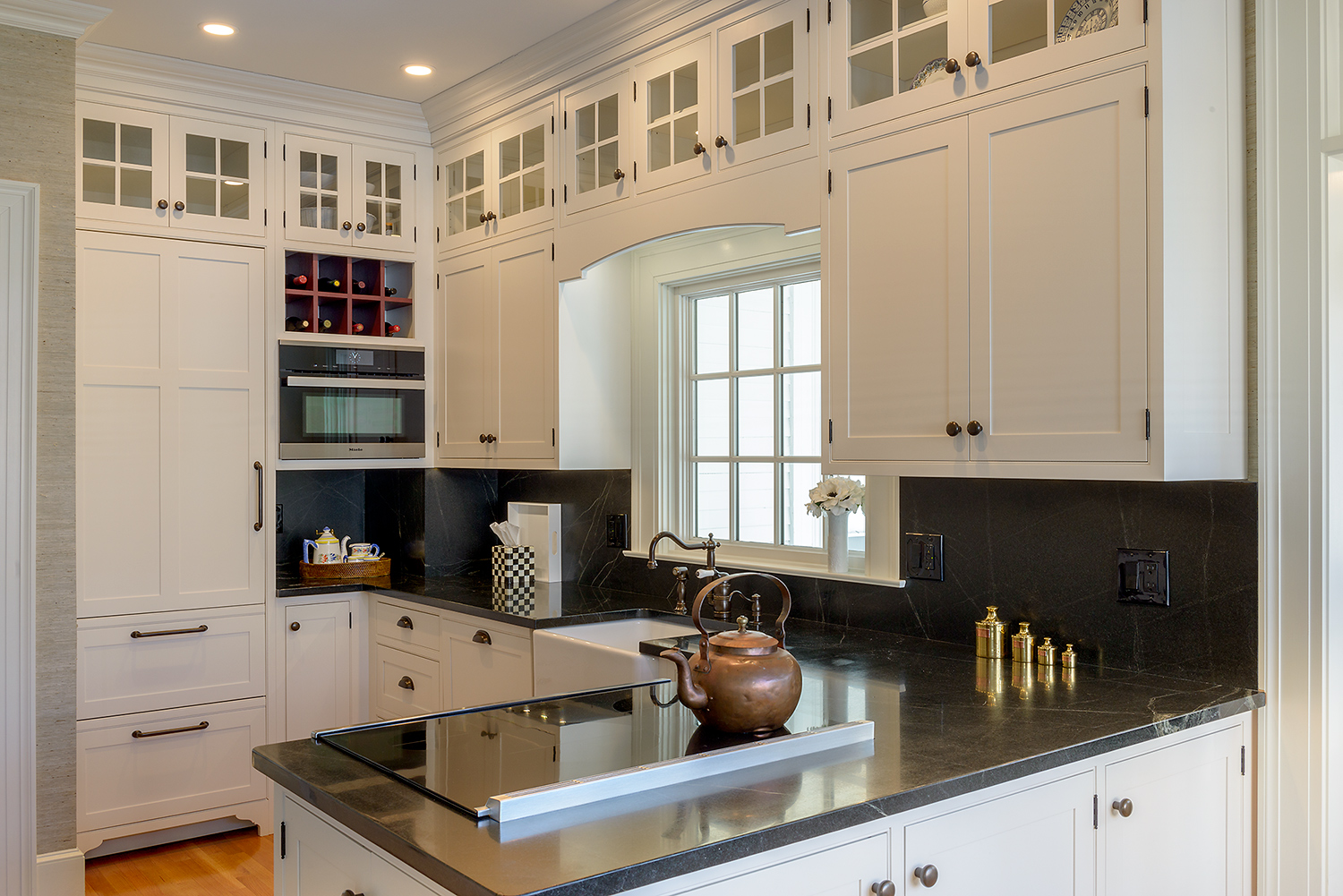 A slim, twenty-seven-inch refrigerator with two freezer drawers below and cabinet fronts creates a seamless look.

The next question was how to gracefully manage three doorways into the kitchen and all those transitions.

As the team—designer, contractors, carpenter and homeowners—puzzled over the space, what evolved was simple and elegant. The team enhanced a doorway with a framed arch. To continue the look in the adjacent sun room, high transom windows were enlarged. The team retained the counter peninsula and added a sleek induction stove.

But a large, essential steam radiator that hunkered against an outside wall posed a conundrum. “We finally arrived at a terrific solution,” Purswell says. “We used slotted soapstone for the top of a radiator enclosure. A bench was crafted to create a nook in the corner.” 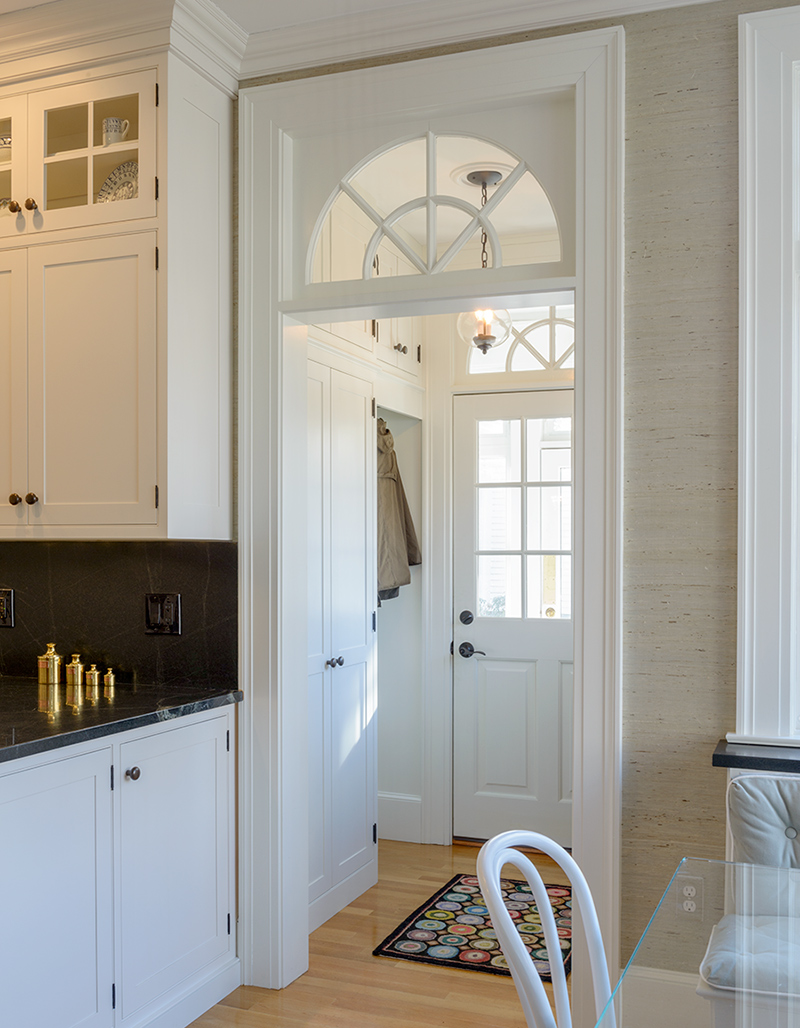 This doorway into the kitchen was enhanced by the addition of a framed arch, a thoughtful detail that makes a huge difference.

Even mid-winter, surrounded by windows, this corner is warm and comfy. To keep an open feeling, a glass-topped table was custom-built and secured to a black, wrought-iron sewing trestle. A pendant light fixture with an old-fashioned cut-glass pattern lights the table and provides a focal point. These two elements were found by Wissink. “She has a wonderful, delicate eye,” Purswell says.

Wissink also chose the teal blue grasscloth wallpaper. Each object in this kitchen—and actually throughout the home—has the pleasing sense of being curated and cherished, from the beautifully shaped copper kettle on the stove to the long-handled copper pot on the wall. Wissink also found the English pharmacy chest that sits in the corner. “My great-grandfather was a physician,” she says, pointing out an old-fashioned medicine bottle of his with a handwritten paper prescription curled inside.

She and Adams chose the oak floors because they knew the room needed to be light and that the warm color would offset the white cabinets. “Scott showed us a lot of cabinet options,” Wissink says. “We liked this design because it was simple and in keeping with a vintage look.”

When asked about the Asian-design influence throughout their home, Wissink explains that her mother collected Asian artifacts. Also she and Adams have traveled extensively in Asia.

To further fine-tune the space, Purswell included touches of mahogany on the breakfront and wine cubby. The room gets a seamless look from an efficient Bosch dishwasher and a slim, twenty-seven-inch Sub-Zero refrigerator with two freezer drawers below and cabinet fronts.

It took between three and four months to do the kitchen. Of course, Wissink and Adams made other improvements. Most notably outside: the couple restored the Victorian urns that were once a part of the Frank Jones estate. The wonderful small lions in the front of the house were also part of the Jones estate. Now, once again, these exterior details showcase a lovely home.

The move to Portsmouth has been a joy for Wissink and Adams. They are close to family and have come to love their new town. “Where we lived before, we had to drive four to five miles just to go to the supermarket,” Wissink says. “Here everything is close by.”

They’ve enjoyed Portsmouth’s restaurants, but most of all the community and the many friends that they’ve made. Inveterate volunteers, the couple has become involved with the library, Strawbery Banke, Discover Portsmouth, Portsmouth Listens West End, Osher Lifelong Learning and, of course, The Music Hall.

The Music Hall’s twenty-sixth annual Kitchen Tour on May 13, 2017 is set in the heart of Portsmouth’s Little Harbor neighborhood. See the latest contemporary and vintage styles created by the Seacoast’s top designers and builders. With coastal influences and historic flourishes, this year’s Kitchen Tour is packed full of diverse kitchens to provide inspiration for anyone looking to renovate his or her kitchen space, to make minor upgrades or simply to appreciate a beautiful kitchen.
Event info: 10 a.m.–4 p.m. Tickets are $27 in advance; $25 in advance for Music Hall members; and $30 day-of. 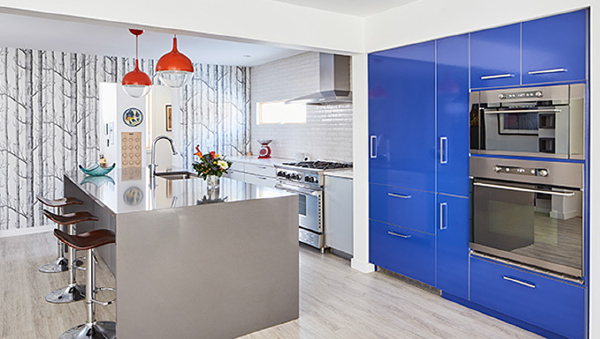