A kitchen near the beach

European style and the surrounding sea influenced the design of a New Castle kitchen. 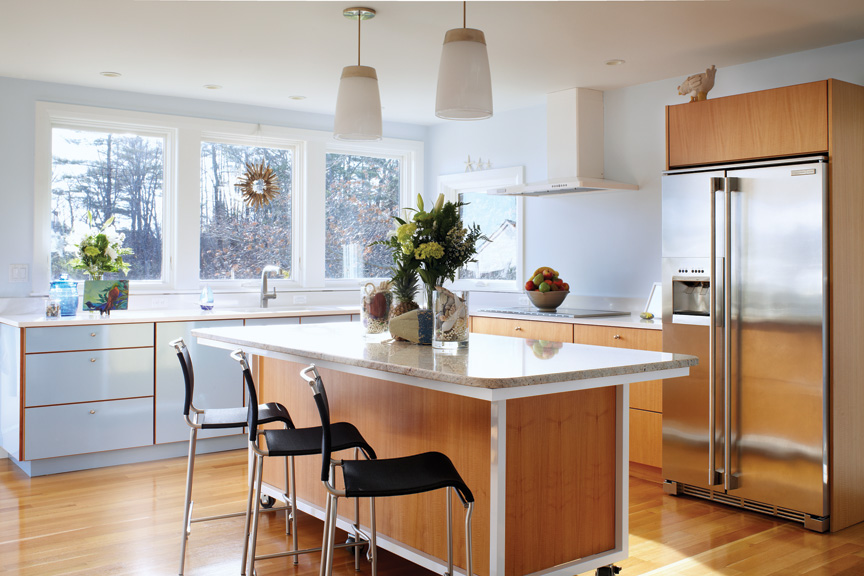 Deedee Hammer likes interiors witha light, airy feel. So for the kitchen of her New Castle Dutch Colonial, she chose smooth surfaces, an open floor plan and a big view.

"I really love Scandinavian clean lines, and I've been strongly influenced by Australian design," says Hammer, whose kitchen is featured in the annual kitchen tour fundraiser for The Music Hall in Portsmouth. "But I really wanted beachy modern."

The house-which dates to 1895-had suffered a lot of water damage when Hammer and her husband moved in three years ago. "There was no exquisite crown molding to save," she says. So they gutted it and "flipped" the rooms around.

The kitchen that once sat in the gloom at the back of the house now faces out. A wide swath of windows overlooks a marshy area toward Wood Island at the mouth of the Piscataqua River. Behind a fringe of trees is Whaleback Light.

"The kitchen is the hub. It's where all the energy takes place. So what was once a living space became our kitchen," Hammer says. "We get the south sun all day long, so it gets warm and toasty in here. And I see the lighthouse every night."

Architectural designer Matt Banow of Rollinsford redesigned the home's exterior and layout. "It was a pretty substantial reorganization of the spaces," Banow says. "The goal was to fit the house to the family's life pat­terns and create an open-concept plan that enhances the wonderful views of the property."

In search of 'luminous'

Banow's work resulted in a kitchen that melts into living and dining rooms with­out any interruption. Uniting the spaces are light colors and a white oak floor.

"I tried to avoid bottlenecks," says Hammer, who is a former manager of 2-D and 3-D projects for the Timberland Company, and has been a design con­sultant for major global brands such as Puma. She is now a project design manager for her husband's construction company, Tom Hammer Construction, LLC, and has other national and global clients.

From floor to ceiling at the back of the kitchen, laminate cupboards form a shimmery blue wall punctuated by stainless-steel ovens.

Like the sea, the wall takes on vari­ous shades of blue throughout the day, Hammer says. Cupboard door handles don't interrupt the flow of the wall. Instead, Hammer uses large moveable rubber "suckers" that look like suc­tion cups. Made by Droog Design, a Scandinavian design group, these can be moved around to open the cup-board doors.

Kitchens in New Castle are the focus of The Music Hall’s twenty-first annual tour. All tour-goers need to do is hop on a trolley that The Music Hall will provide at designated parking lots in New Castle.
“Especially this year, a wide variety of kitchens will be on the tour,” says Kathleen Soldati, The Music Hall’s director of marketing. “We try to plan it so people can see different kitchens in different settings. This year, visitors will be able to experience everything from a kitchen in a historic home to a modern kitchen.”
The tour is scheduled from 10 a.m. to 3 p.m. on Saturday, May 5. Advance tickets are $25 or $23 for Music Hall members. Day-of tickets are $27.
For information and tickets, call 436-2400 or visit themusichall.org. A map of the trolley route and house locations will be available online or at the box office a week before the tour.

"I just wanted it to be luminous," says Hammer.

Along the kitchen's two other walls, smooth white countertops of man-made stone segue to an induction stovetop and wrap under the windows. The stainless-steel sink-where much of the work happens-overlooks the view.

In the center of the kitchen sits a mobile rectangular island with a gran­ite countertop, which is colored a mot­tled light brown that Hammer chose because it reminded her of the beach. Supporting the countertop is a frame on casters, so the island can be moved out of the way. Modern glass pendant lights-recycled from a store that was changing its fixtures hang from the ceil­ing, illuminating the island. "I wanted the island specifically for entertain­ment, so there was mobility and free­dom of movement," Hammer explains.

Bringing the ideas together

Hammer designed her new kitchen with kitchen designer Scott Purswell, owner of Dovetailed Kitchens. Purswell is familiar with Hammer and what she likes, having worked on four kitchens for her in Portsmouth and New Castle.

"The goal is to execute the design she has in her head with materials she gleans from many wonderful sources," Purswell says. "It's a great party of design ideas."

Hammer's taste in décor abounds. Around a white dining-room table of powder-coated natural steel sit pastel- colored 1950s-style chairs with molded bucket seats and "Eiffel" bases. Near the fireplace, a large Arco lamp with a white marble-slab base leans a stain­less-steel arm over a tiny white pedestal table by Eero Saarinen, a twentieth-century Finnish American architect and designer known for his simple sweeping lines.

The woodwork and ceiling are white. The walls are painted a pale blue C2 color called Oxygen. Punctuating one pale blue wall is a black-and-white photo in an ornate white plaster frame.

Where does Hammer find her ideas? "It's fun for me," she says, add­ing that she often peruses the Internet for interesting materials for home and retail environments. "I'm a mom, and I'm in the PTO. Plus, I just happen to love interiors."

In warm weather, visitors can spill out of the kitchen to the wooden deck that wraps the house. Continuing the beach theme, the deck's edge is cut in wavy lines and surrounded with stones rounded by the elements. The deck is built around a fireplace of jumbled rocks inspired by the style of Lew French, a stone crafts­man from Martha's Vineyard.

"I wanted to bring the beach to my house," she said. "I wanted it to be soft, not rigid."