A Kitchen Renovation Gets a Boost

Seeking out a talented designer brought a homeowner's ideas for her new kitchen to life. 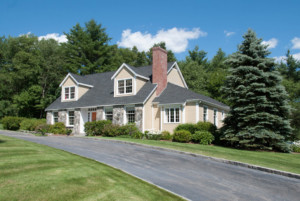 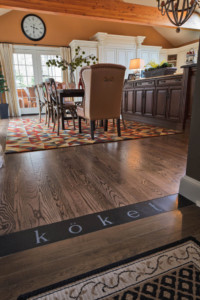 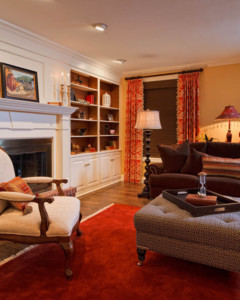 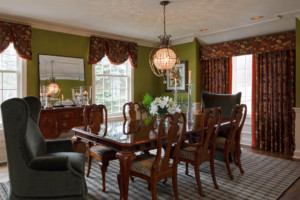 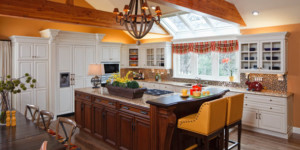 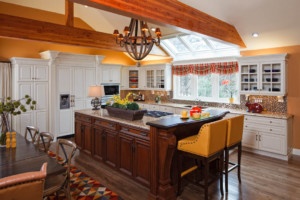 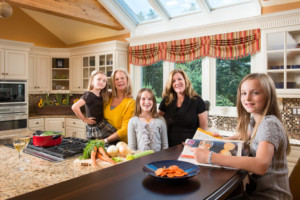 When Amy Vikstrom looked around her family's Bedford kitchen, she saw its circa 1988 style and functionality. But what she wanted to see was her family of five using a redefined space for the years to come.

So, the family decided to take on the renovation. "I knew if we did it now, we would be able to enjoy it for all our kids' teen years," Vikstrom says. She got started the way that many design books recommend-by paging through a tall stack of design magazines and clipping pictures of things she liked. Additionally, she attended the annual Palace Theater Kitchen Tour, a fundraiser for the historic Manchester theater and a great way for those pondering kitchen renovation to see several new, top-notch kitchens in a single day.

Vikstrom made a couple of decisions on her own early on that would influence the route the renovation would take. First, the Vikstrom home, with its vaulted ceiling and exposed beams, lent itself to a casually elegant style. Vikstrom found a white cabinet door style that she liked and brought it to Granite State Cabinetry in Bedford. "They were able to customize a finish to match what I had in mind," she says.

Plus, Vikstrom liked the range on the island and knew "it would be crazy to move the sink from underneath the window," she says. In addition, the family was fortunate to be able to leave all plumbing intact during the renovation.

At that point in the design process, Vikstrom knew much of what she wanted: traditional design elements, modern appliances and a splash of the unexpected. But it was that last wish that seemed difficult to express, and so she turned to a designer for a consultation. "I called Leslie Rifkin (of L. Newman Associates/Paul Mansback, Inc. in Manchester) because I had seen kitchens she'd designed on the kitchen tour, and each one was unique. I knew that without help, I would try to match everything and end up with a very safe, boring kitchen. And when Leslie looked at my plan, she said, 'This is good, but it could be even better.'"

"Plans are in black and white," Rifkin says. "A client can't always feel what the room will be like without an interpreter. Amy's strength was that she knew what she liked and didn't like, but she was most interested in function for her family and lifestyle, as opposed to what it could feel like to be in the room."

To bring the balance Vikstrom wanted, Rifkin got to work on the colors and finishes.

Rifkin's first order of business was to change the color of the island woodwork, darkening it to contrast with the rest of the cabinetry. Her design-with three counter heights and a cherry wood bar at one end-became the focal point. "I wanted the island to feel more like a found piece of furniture than island cabinetry. I also added lamp light to the kitchen to create a warm pool of light on the counter for that cozy warm feeling.

"We spent our time with lighting, fabrics, furniture and counters," Rifkin continues. "Amy
appreciated that I would take her a bit out of her safety zone. That's the sign of not just a good client, but a great client."

The Vikstroms' dining table is a case in point. As a family heirloom of Vikstrom's husband, Anders, the table was made in Sweden and exported sixty years ago. The family wanted to keep it, even though it might not work with the new design. To incorporate the table into the new color palate, Rifkin found a refinisher to give the finish a lift.

"Then she changed the chairs, adding upholstered armchairs at the ends," Vikstrom says. "I never would have thought of that." The vinylized armchairs add a splash of color and whimsy, and they can be cleaned simply with a sponge, which makes them child friendly.

Another touch is the carved stone greeting on the threshold in the hallway. Flush with the floor, the beautiful stone reads "köket" ("our kitchen" in Swedish). Rifkin turned to her contacts and connected with a tombstone engraver to complete the stone. "Leslie knew how and where to get things done," Vikstrom says.

"Working with her made me more creative," Vikstrom said. When Vikstrom found a funky rug at Crate and Barrel, she wanted to incorporate the piece in some way. Rifkin had it made into a custom runner.

In sum, a good designer can help make a big renovation feel more manageable. "Leslie was great at keeping the energy going, to get through it all," Vikstrom says. "The simple changes she made had a big impact."