Robin Kealey enjoys cooking and being with family—so much so that the Moultonborough home she and her husband John share has four kitchens: the primary kitchen; another on the lower level, overlooking Lake Winnipesaukee, that’s perfect for entertaining; a cooking area with a grill on an screened porch; and a small kitchen in an apartment over the garage. But it’s the main kitchen where Robin really feels at home. “I wanted it to be a friendly place to get together,” she says. “Our children are in Boston and visit us frequently with their friends, especially over the holidays.”

Faucets and fixtures from F.W. Webb, with seven showrooms in New Hampshire
www.fwwebb.com

Liam Cargill, of Cargill Construction in Campton, was the contractor/project manager on the Kealey home; Pam Greene, the company’s interior designer, worked with Robin to create a kitchen where she would be comfortable cooking and entertaining. The Kealeys moved to New Hampshire from Virginia; there were features of their Southern home that they wanted incorporated in the new kitchen. “They wanted the kitchen to be the hub of the house,” Greene says. “They’re close-knit, and everyone likes to be in the kitchen. Robin loves to cook.”

The focal point of the rustic but elegant space is the forty-eight-inch, six-burner range—with a custom, copper hood—that’s set into a fieldstone wall along one side of the kitchen. The backsplash, similar to a design the Kealeys had in their Virginia home, is honed stone with an inlaid stone diamond mosaic pattern. The colors are echoed throughout the kitchen, including the hand-hewn wood beams that cross the ceiling.

Greene was diligent about making the area around the range and island workable for Robin. “We placed a left-hinge refrigerator to the left of the range, and the freezer on the opposite side of the island to balance the space,” Greene says, “so Robin can easily reach whatever she needs.”

A large, granite-topped island—containing a prep sink, microwave and under-counter beverage refrigerator—anchors the room. Off-white custom cabinetry along the kitchen perimeter and in the bar area provides storage and lightens the space; there are two dishwashers, one on either side of the primary sink.

Counters along the perimeter are black soapstone, treated with wax. “It’s lustrous,” Greene says, “and you only have to apply the wax once a year, which is more convenient—and less messy—than oiling your countertops.”

The Kealeys have already enjoyed many family celebrations in their kitchen. “I really like the stove area,” Robin says. “The hood, the stone tile—I love the way everything flows.” 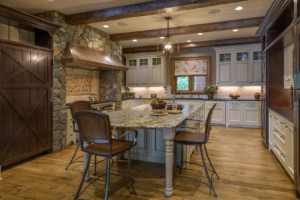 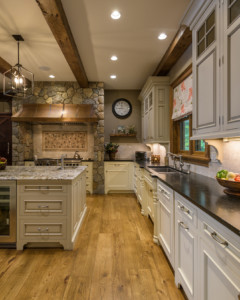 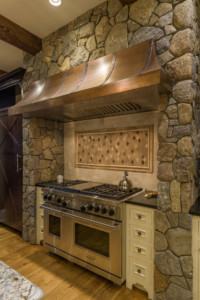 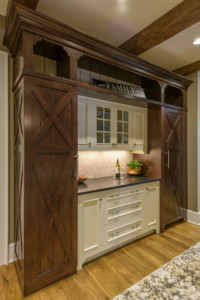 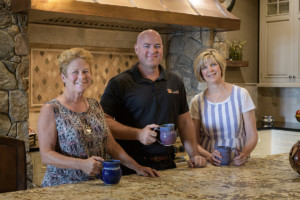