Homeowners take a North Country getaway back to its roots.

While searching for a lakefront property in New Hampshire several years ago, Lou Kaucic came across a one-hundred-year-old house with striking, wide-angle views of Lake Winnisquam. "The first time I walked onto the property, the view gave me goose bumps," he says. "The setting on this point of the lake was fabulous." The house-which has since been dubbed "Goosebumps"-is now the primary home for Kaucic and his partner Billy Merritt, both retired executives now working as executive/life coaches.

Originally built as a two-season lake camp in the early 1900s, the house gained a second floor and other amenities in the 1930s. Its evolution continued over the decades, as it became a year-round property. An interesting chapter in its long history was during the 1930s when it served as the summer retreat for the Shaker community in Canterbury. "We think of the Shakers' classic adage, 'Hands to work, hearts to God,' but even they needed some respite," Kaucic says.

The camp now has three bedrooms and measures about 2,600 square feet. There is also an adjacent guesthouse. When Kaucic and Merritt bought Goosebumps in 2004, it was sunny and pleasant inside. But with its white walls and cabinets, and its overall "'80s suburban feel," the house lacked the "lake" ambiance Kaucic and Merritt were after. The owners were pictur­ing a comfortable, welcoming place that combined aspects of "Adirondack, Ernest Hemingway, New England lake camp and a big hug," as Kaucic puts it. Guests would feel free to kick back and make themselves at home, and dogs would be allowed on the furniture. "We never envisioned it as a museum," Merritt says.

A cozy booth, with a table supported by a tree trunk, is a focal point of the kitchen.

Merritt and Kaucic found the perfect person for the job in interior designer Maria Palance Perron in Bristol. At first, as Merritt and Kaucic conveyed their ideas to her, the concept of "lake" didn't seem enough to proceed with. "Everybody has a different idea of what that is," Perron says. But, says Kaucic, "She asked great questions. She's a good listener and very visual. And once she was on to our vibe, the results were amazing."

That vibe turned out to include stone, natural wood, rugged furniture, and a palette of dark reds and greens. The exterior of the house (formerly a beige/yellow) was repainted in dark red with dark green trim, which made it look more like a classic New England camp. Inside, Perron accented some of the walls with cultured stone, inte­grating it so there's a sense that the stone was uncovered during a renova­tion. The same stone was added to the exterior in random areas. The walls and ceilings of each room were paneled in pine planks, and each room stained in a shade Perron felt appropriate for the furnishings and atmosphere.

Since the house didn't have any stone or much visible wood to begin with, it all had to be added. And every piece of dry wall had to be removed. Mark Phelps, owner of Winni Construction, Inc. in Danbury, was hired for the project. "We ripped it right down to the frame," he says. "It was a camp that had been added on to over the years. You never knew what you were getting into."

"As with any remodeling project," Perron says, "there are many unknowns until one is able to get inside and start opening up walls and ceilings." For example, the house turned out to need a complete rewiring. 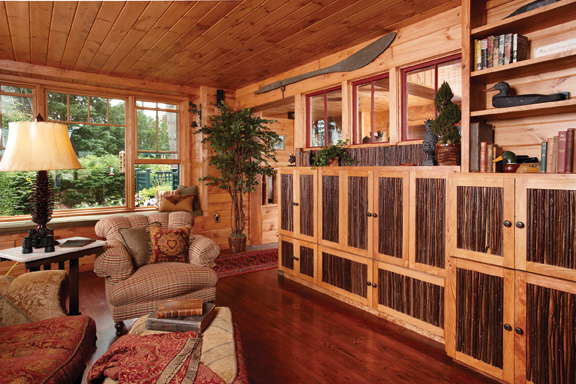 Fabrics chosen for furniture such as this easy chair (top) incorporate different patterns and textures to create a comfortable kind of “eclectic harmony,” according to the homeowners. Above, found sticks and twigs were built into the living room’s cabinet doors.

For furnishings, Perron sought pieces with "a lot of warmth, color and rich­ness." The palette encompassed reds, greens and neutrals to maintain the "camp" ideal, and the patterned, tex­tured fabrics conveyed the comfort the owners wanted. Large and well-upholstered chairs and sofas were cho­sen. "Every sofa was designed for a nap," Merritt says. That includes canine as well as human naps-the resident Welsh Pembroke corgis also like to rest in comfort.

In a nod to the guest-friendly nature of Goosebumps, each of the three bed­rooms has its own bathroom. The bath­rooms incorporate a mixture of natural and man-made materials-wood, stone and tile-which gives the rooms an inside/outside feel. The shower in the first-floor guest bathroom is made of glass on three sides, with a back wall and ceiling made from small rounded stones standing on end that merge asymmetrically with the wood ceiling.

The kitchen-which is one of Merritt's favorite rooms (the other is his office, which looks out onto the lake)-has a cozy booth table where Kaucic often likes to work. The table­top, which is three inches thick, was made by Amish craftspeople in Ohio. It rests on a tree trunk that Kaucic says is similar to one that grew through the front deck of the camp back in its early years. The trunk, stripped of its bark, was made by Kaucic and Merritt's good friend in Ohio, Gary Inkel, who was also responsible for many of the strik­ing hand-forged details in the interior. They include solid wood beam stairs (from the Ohio Amish), stair posts and railings, as well as the found sticks and twigs that accent the cabinetry.

The multitalented Inkel also did the landscaping on the project, and installed the tile walls and floors for all the baths. Inkel and Perron worked closely together throughout the entire project. "They were an amazing com­bination of creativity and hard work," Kaucic says.

Kaucic's favorite place is the front lake-facing room where, he says, "You just feel enveloped by nature and the seasons." Numerous windows offer views to the water, and accents in this room include carved waterfowl decoys as well as lamp bases that resemble pinecones or are made from antlers. Throughout the house, snowshoes, boat paddles, Abanaki replicas and other North Woods emblems adorn the walls.

Wood, stone and tile contribute an indoor/outdoor feel to this bathroom.

When asked for advice for anyone else planning a project of this kind, Kaucic answers, "One of the best things Billy and I did was sit down and share our hopes and dreams about this home." They did this early on, even before they retired and bought the house.

"It wasn't so much about what it would look like," Kaucic says. "It was more of a list of adjectives: warm, com­fortable, welcoming," Merritt says.

The homeowners wanted a place on a body of water, with a house that eas­ ily blended in with the lake and its sur­roundings. And they wanted that house to make family and friends feel welcome. Apparently, they do: Goosebumps aver­ages more than sixty visitors a year.

Since Merritt and Kaucic moved in, Goosebumps has lived up to its name in more ways than one. Its views are still spectacular, of course, but Merritt and some of the visitors to the house have heard singing at odd hours. Spirits of the home's former Shaker visitors? Who knows? But, Merritt says, "We've had guests say, 'Where did that beauti­ful music come from?'"

Perhaps even ghosts need R&R once in a while.