A Lake House for Family and Friends

Unforeseen challenges did not dampen a couple’s enthusiasm to forge ahead with their homebuilding plan, thanks to a team of dedicated and diligent professionals.

Don't let the helicopter landing pad fool you. The newest vacation home on the shores of Lake Winnipesaukee in West Alton is no flight of fancy.

To the contrary, the owners and builders had to surmount severe time con­straints, fickle New Hampshire weather, unforeseen design modifications and the bankruptcy of a key player before bringing things to a harmonious conclusion.

Much of that harmony can be credited to interior designer Jenn Sanborn, ASID, the owner of Sacris Design in Amesbury, Massachusetts.

"There was not an architect for the project because this was an Acorn home, a form of panelized post-and-beam construction from Empyrean International out of Acton, Massachusetts," she says. "And the fact that Empyrean filed for Chapter 11 (bankruptcy protection) during the process was a bit disconcerting."

Clearly, Sanborn has a gift for understatement, but even before the bankruptcy filing, the homeowners and building contractor-Mark Carrier of Mark Carrier Construction, Inc., in Manchester-were wrestling with other issues, many of which required Sanborn's wide range of expertise.

"Before breaking ground," she explains, "[the homeowners] had spent months trying to figure out some things about the inte­rior of the Acorn that just weren't working for them. They didn't want to go ahead, but because of weather and other deadlines, they knew they had to start building, so … " 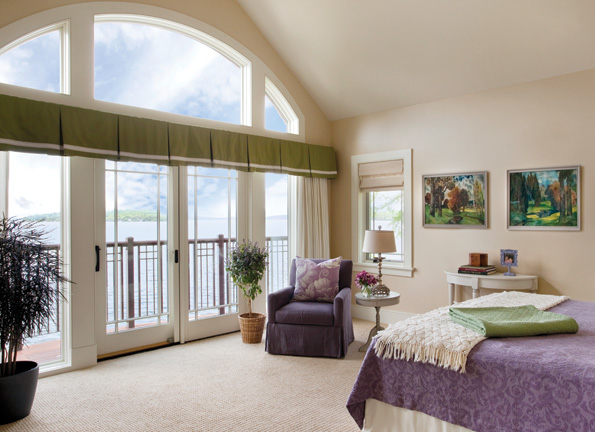 The tri-partite, arched window motif in the master bedroom is repeated throughout the home. (The bedroom’s chair, pillow and coverlet were provided by Red Bird Trading in Newburyport, Massachusetts.) Photo by Eric Roth.

So Sanborn started to modify the layout of the home's interior, even as Carrier's cement trucks began converging on the property.

"This was in the late winter of 2008," Carrier says. "Because of changes to the Shoreline Protection Act, we needed to move and get the foundation in place by April 1. The load limits of the road are posted in regard to vehicle weight, and some of those are dirt roads, so on days when it got above freezing, we couldn't deliver concrete. Plus we hit ledge and had to do some blasting, all the while ad-libbing on the foundation to accommodate Jenn's new design, so I guess you can say it was a bit of a struggle."

Of course, the homeowners could not have envisioned such a scenario when they put a long-awaited plan into place.

"We had a place on the lake over in Laconia," says the hom­eowner, "but we felt we were on the wrong side of the channel. We had good friends here on this cove-five other families- so we had been peeking around for a property. When this became available, we knew it was big enough for my husband to put in his helicopter landing pad and it would also be big enough for that day when the grandchildren arrive." 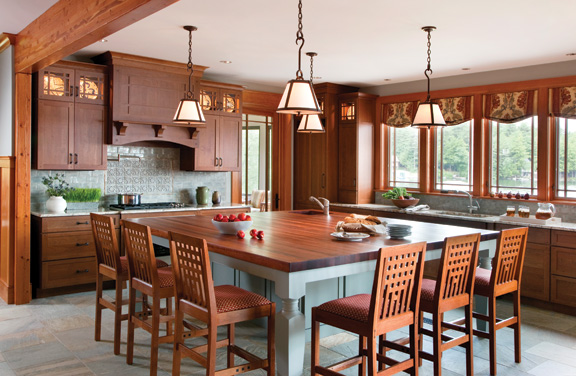 A highlight of the kitchen is an African mahogany slab that anchors the island, which is illuminated by bronze-finish pendants with linen shades by Dana Creath Designs. Plants were provided by Susan’s Interior Plantscaping in Salisbury, Massachusetts. Photo by Eric Roth.

The cement trucks arrived first, however. Then, with the founda­tion in place in accord with the April 1 deadline, it was time to assemble the panelized home, albeit with little input from the financially distressed manufacturers.

All the more pressure, then, on the collaboration between the homeowners, the builders and Sanborn.

"I wound up performing the role of interior architect," Sanborn says, "and the first elements I focused on were the lighting and kitchen design, realigning the front entry and improving the con­nections between the foyer, kitchen and living room.

"As it was originally laid out, it was this grand home with this incredible view, and yet the plan called for a staircase that was kind of shoved in a corner. You would have walked up the stairs straight into a solid wall. What we did was expand the space for the staircase. That allowed us to design in some curved elegance so as you go up to the second floor, you're now directed naturally to a balcony area that overlooks the great room and offers a stun­ning view of Lake Winnipesaukee."

Of course, glitches are to be expected-even with something as reliant upon form and function as a staircase. So it fell to Carrier and his foreman, Steve Danko, to ride to the rescue again. 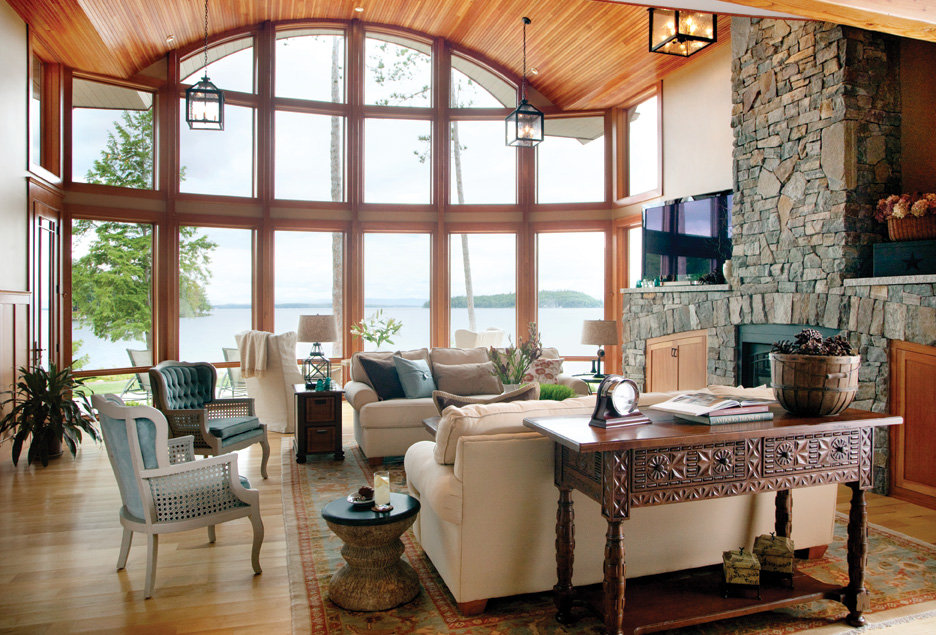 In the living room, the view of Lake Winnipesaukee is almost upstaged by the glorious barrel-vaulted ceiling and the expansive granite fireplace, both of which help to give the room its grand scale. Photo by Eric Roth.

"Not only did the original staircase not meet code," Danko says, "it didn't fit the opening, so we brought in some of our own people to create the staircase, complete with the mid-landing and the curve Jenn wanted."

Designing the kitchen was the next task at hand. In listening to what the homeowners hoped for, it became clear to Sanborn that the original layout did not meet their needs.

"They are active, fun-loving people," Sanborn says. "For them, building a house like this is all about sharing it with family and friends. We needed to create inviting, comfortable spaces that everyone could enjoy."

But in which room will folks most likely gather? Sanborn wanted to make certain that the kitchen and living room offered exquisite options.

"With the kitchen, proportions were probably the greatest chal­lenge we had to deal with," says Patrick McAuliffe, a designer with B&G Cabinet, LLC in Newburyport, Massachusetts. "For instance, the wooden top for the kitchen island that Jenn and I designed is all one piece of African mahogany. It's eight feet square and two-and-a-quarter inches thick, and we had to get it into the house with just three-quarters of an inch of clearance with the front door. There was no room for error in transporting it into the space, which was complicated by the fact that it had an oiled surface and it weighed more than seven hundred pounds."

On that same grand scale, McAuliffe says, "Getting the num­ber of appliances they wanted in the kitchen was also a challenge, so there's a holding oven and a microwave built into the island and a separate stove top built into the counter. When you look at the flanking ends of the kitchen windows, there are two Sub-Zero combination refrigerator/freezers that blend in perfectly with the cabinetry."

Ah, but it is the fine detail of that cabinetry that best demon­strates Sanborn's abiding faith in McAuliffe's abilities.

"We actually used three different cabinet manufacturers in the home," he says, "but the kitchen and the majority of the cabinets are from Cabico in Quebec. With this particular design, a tremen­dous amount of detail went into the kitchen cabinets, so we pro­vided the manufacturer with a floor plan, the varying elevations of the different cabinets and detailed Auto CAD (Computer Assisted Drafting) illustrations, so all the details were the right size, all the way down to the one-by-one-inch pegs on the exhaust hood."

It is the attention to the details that make the house feel so harmo­nious. Sanborn incorporated similar decorative patterns through­out the house: the custom front door, the design of the railing balusters, the exhaust hood in the kitchen and the vast fireplace in the living room.

"The huge barrel-vaulted ceiling in that great room is breath­taking," Sanborn says, again citing the handiwork of Carrier's tradespeople. "And that's part of the inspiration for the expansive, custom fireplace. Originally, the plans called for a six-foot fireplace, but in a room with those proportions, we needed to create a better sense of balance."

The natural colors of the stone are reflected in the other interior finishes. Rust tones are accented in the wood wainscoting, and the gray and green hues are highlighted in the unique quartzite floor­ing, warmed by the radiant heat of an efficient geothermal heating system. Huge Pella® windows with custom trim provide light to the room, which shows the decidedly light decorative touch the homeowner was seeking.

"Jenn really understood my desire for clean lines," the hom­eowner says. "I'm not exactly contemporary, but once she got a sense of my taste, she would show me things that had a little more funk to them, things that were a bit outside the box. The designs she showed me had a little more excitement to them, but they still had a tranquility that I liked."

Tranquility of design is one thing, but a tranquil experience is not what you can expect when you build a six-bedroom, six-bathroom home on one of the most glorious bodies of water in all of New Hampshire. Still, if you ask the participants, they would happily do it all over again.

"All too often you hear complaints about designers or con­struction people," the homeowner says, "but for everything we had to go through, all of Mark's people and Jenn and Patrick were just so easy to work with, and we couldn't have come away happier."