A Lake House That Celebrates Nature

A Lakes Region retreat pays homage to the architectural style of the great camps of the Adirondack region of New York. 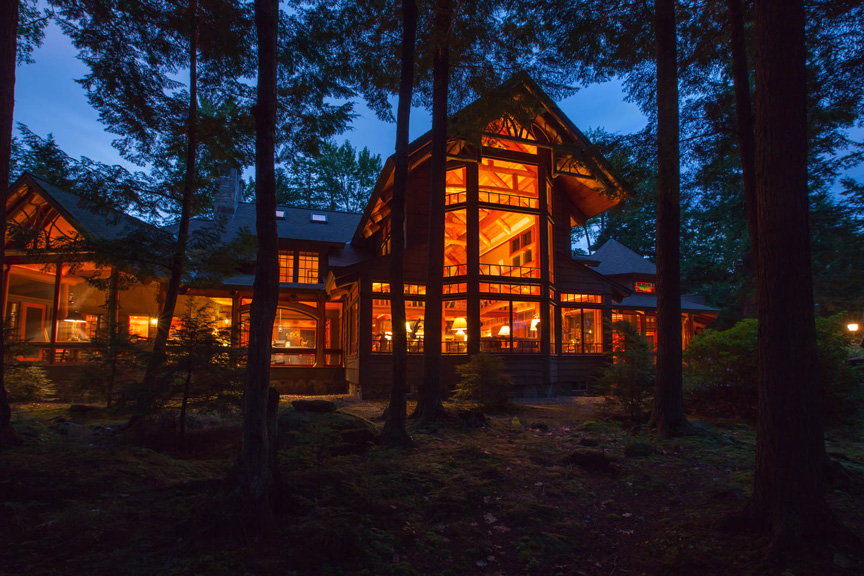 For one couple, their love of the New Hampshire Lakes Region began more than forty years ago. It started off small and grew each year as the family came back for vacations with their young children. But eventually, just visiting for a vacation wasn't enough. Then, the couple bought land on a lake, and built a house and guesthouse that now accommodate all their children and spouses, their grandchildren, and then some! This New Hampshire home, the couple says, has become more of a home to the family than the house where they raised their children.

Homing in on an architect and a design

After purchasing the property, the couple saw a magazine with an Adirondack Style home on the cover and decided that was what they wanted to build. Associated with the Great Camps in the Adirondack Mountain area of New York, the Adirondack architectural style features native building materials, such as whole, split or peeled logs; architectural components made of bark, burls and roots; and fieldstone for fireplaces and chimneys. Logs articulated the buildings' framing, and the buildings (and their interiors) were recognized for their outstanding craftsmanship.

Despite being offered an introduction to famed Rustic Shingle Style architect Robert A. M. Stern, of Robert A. M. Stern Architects in New York City (which designed St. Paul School's Ohrstrom Library in Concord) and current dean of the Yale University School of Architecture, the couple wanted to work with a local architect. Outstanding recommendations led them to Christopher Williams, of Christopher P. Williams Architects, PLLC in Meredith. (Interestingly, Williams's uncle, Vincent Scully, was a beloved and renowned professor of architecture at Yale until he retired in 1991.)

At the time, the homeowners could find only two important books on Adirondack Style architecture and furniture, but that was enough. "Between them, we were able to find both wonderful ideas and concrete examples of what we wanted," say the homeowners. To further help the couple, interior designer Mary Clark-Conley, of Clark Planning and Design in Rumney, was added to the team.

In 1990, the project began with the construction of a boathouse. "We wanted to experiment with how to use the logs before we started on the other buildings," the homeowners explain.

Logs were used for the upper level while a steel frame was built for the lower level. The striking stick work of the boathouse's railing and gable ends was a result of the collaboration between Williams, cabinetmaker Howard Hatch and his business partner at the time, Olof Ekbergh. With the success of the boathouse-"Chris's design for it is wonderful," the homeowners say-next came the guesthouse, quickly followed by the main house.

The details of the homebuilding

Although smaller (3,500 square feet), the guesthouse is a close sibling to the main house (6,800 square feet) as far as design details. Both buildings feature extraordinary timber framing, using logs for the structure of the buildings. Actual tree trunks-roots included-are also part of the structure, rather than being just decorative elements. All fireplaces are made from stone (by Graystone Masonry in Gilford), and many of the cabinets and other architectural details (such as dentil molding) feature handsome stick work. Some electrical outlets are perfectly covered in either lichen or stone.

Hatch, a New Hampshire Furniture Master who now lives in Maine, was inspired by the Victorian Stick Style of architecture and its exposed trusses, which were part of Williams's design for these buildings. So Hatch went looking for and found sticks-filling several pickup trucks, he says-from various locations around Conway, where he was living at the time.

"For visual interest, we chose pin cherry-a small, first-growth tree-for its shiny reddish bark," Hatch says. "We also used some birch, ash and maple." All the sticks were sorted, split and cut to fit the spaces they went in.

In addition to the dentil molding in both houses, there is also stick work on the main house's entry door; on some of the interior doors; and on cabinets in the kitchen and dining room. David Norton, a cabinetmaker who worked with Hatch and Ekbergh, made beautiful pictures in burnt pine that are featured on other interior doors in the main house; Norton also did a striking pictorial representation of all three buildings with very small sticks for a headboard in a guest room.

Along with Hatch and his group, White House Construction used traditional carpentry with conventional square-edge lumber while Smith Timber Framing in Madbury worked just with logs. Apparently, Smith Timber Framing had great connections in the logging industry and was able to find trees that survived a windstorm in northern Maine. These trees were bent over but still alive, and they eventually became the curved trusses in the main house.

Also in the Maine woods, Smith Timber Framing found a tree growing over a rock. Harvested together, both were brought to New Hampshire, and Williams suggested transforming them into a newel post in the main house's entryway. The homeowners say they love the entry, with its soaring space and rustic staircase made of logs, and this bulbous piece of wood at the foot that's wrapped around a rock. Because it is so big, most of the rock is in the cellar, where it sits on a steel column.

Both houses feature remarkable framing (ceilings soar to nineteen feet in the guesthouse and thirty-two feet at the main house), which was done by Smith Timber Framing. The homeowners rented a warehouse where the framework was constructed before being moved on site. "We ended up power-washing the bark off the trees, because we wanted it to look natural with no gouge marks from tools," they explain.

During the site work, trees from the guesthouse footprint were moved to landscape the area around boathouse; then some of the trees from the main house footprint were used to landscape around the guesthouse, while other trees for landscaping were moved to an on-site nursery to use later for landscaping around the main house. "About 90 percent of them survived," Williams says.

The homeowners even dug up moss on the forest floor and moved it back once construction was complete. "We didn't want the site to look disturbed and wanted it as natural looking as possible," they say.

The project was a labor of love by all parties involved, from the homeowners to the designers and the contractors. "Every person working on the design and on-site really enjoyed the project and was totally committed to making it the best they could," Williams says. "The positive attitude was contagious, and the results are evident in the finished building complex."

The homeowners-who love being able to enjoy the outdoors all summer-use all the rooms of their house, all the time. "There are no idle rooms," they say. "We love being able to group tables in many conformations to accommodate large or small groups. For us, this is a gentle, serene lake home that's totally open to nature. Family and friends are always coming and going."