A Lakes Region collector fills his home with White Mountain School paintings, which remind him of the countryside dear to his heart

New Hampshire's White Mountains have long been a magnet for tourists, sports enthusiasts and artists who are taken with the area's unspoiled natural beauty. For more than two hundred years, many of the country's most talented artists have worked here, and one Lakes Region aficionado has built an impressive collection of their work.

Robert Cram says his father always urged him to "stop and smell the roses" and appreciate nature. For getaways from their Wilmington, Massachusetts, home, the family would venture to New Hampshire; one place they'd go swimming is Emerald Pool in Chatham, "where the sparkling water is really emerald green in color," Cram says. (Albert Bierstadt's lovely 1870 oil on canvas that was inspired in Chatham, The Emerald Pool, is on display at the Chrysler Museum of Art in Norfolk, Virginia.)

The Cram family would later purchase a camp in Gilford, and Robert has lived in the Lakes Region full-time since he graduated from high school. At what was then Plymouth State College (now Plymouth State University), Cram studied art along with his regular coursework; when he graduated in 1985, he became a counselor for disabled students. He worked in Berlin, Colebrook and Wolfeboro, and was always on the road to see clients. "Driving along, I'd see the Israel River in Jefferson or the Swift River in Conway, and it was impossible not to admire those views," Cram says. He was also curious about what was down the side roads and enjoyed taking time to explore those places. 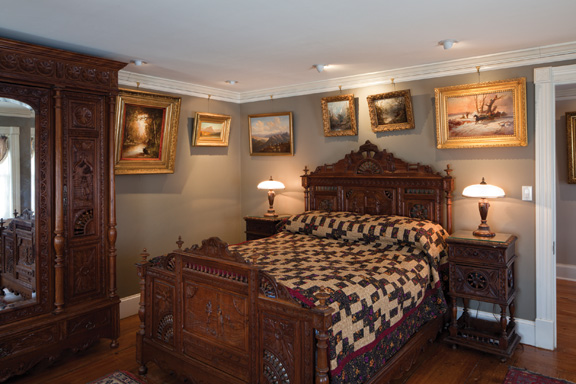 This bedroom in Robert Cram and Michael Mooney’s home is furnished with a seventeenth-century French Breton bed, and matching armoire and
three side tables. To the right of the bed is Thomas Hill’s Sleigh Scene. Two paintings by William Louis Sonntag hang directly over the bed and to their left is a Thomas Birch that shows a picnic on Mount Washington.

Cram and his partner-Michael Mooney, a businessman who grew up in Berlin-bought their first New Hampshire landscape painting about twenty years ago. "This type of art called out to us," Cram says, "since we knew where all these places were." This first piece was an unsigned woodland scene from a tag sale in New London for less than $200. "We had no idea whose work this was, but the painting reminded me of a walk in the mountains on a sunny day and taking in everything that was around you." Mooney and Cram wound up selling this painting in order to acquire other works, and later found out it was by John Joseph Enneking. He had studied with Charles-Francois Daubigny in Paris and later opened a studio in Boston; Enneking's work is now in the Boston Museum of Fine Arts' collection. "We kick ourselves about that," Cram says, "and now sell very few paintings."

Cram says discovering good paintings requires having done one's homework. "You can still find paintings for $200, but you have to know a lot," he says.

He attributes his success in building his collection to immersing himself in New Hampshire history. "When I had time off, I'd go to the library at Plymouth State College and bury myself in reference materials," he remembers. He'd read books on the grand hotels of New Hampshire, many of which had resident painters each summer during the nineteenth century. "If you got a painting of the Profile House in Franconia Notch and knew your history," he says, "you could easily tell who the artist is."

Cram says other valuable references are Thomas Starr King's book The White Hills: Their Legends, Landscapes and Poetry, published in 1860. (Cram uses bookfinder.com to locate copies of older books.) He refers to the Appalachian Mountain Club's White Mountain Guide to pinpoint that same location today. "It's a lot of fun to compare how these places look now to how they looked back then," he says.

Meeting the late Robert Goldberg, a collector in North Conway, is an event that Cram attributes to helping educate him about White Mountain landscapes. "Robert acquired Benjamin Champney's collection when it was broken up and sold us one of his paintings [Artist Brook]," Cram remembers. "He wanted $2,000, which seemed like a lot of money at the time, but he told us to bring the painting home and live with it. We fell in love with the painting, and it hangs in my office."

Cram and Mooney's collection has since grown to eighty paintings, and includes works by Edward Hill, Samuel L. Gerry, Thomas Cole, Samuel Coleman, William Louis Sonntag, Thomas Hill and Thomas Birch. These paintings surround Cram and Mooney in the charming 1840 home they bought seven years ago in Melvin Village and restored over a three-year period. "The house looked like a teardown when we bought it, but the wraparound porch that gives the house a Victorian look was a selling point for me," Cram says.

Cram retired from counseling in 2007, and has since devoted himself full-time to researching and collecting White Mountain paintings. "I take time to look into old records and talk with other collectors," he says. "For me, this gets back to my father's wonderful advice about smelling those roses."