A couple build a retreat where they can enjoy views of Lake Winnipesaukee and comfortably accommodate their large family, which includes ten grandchildren. 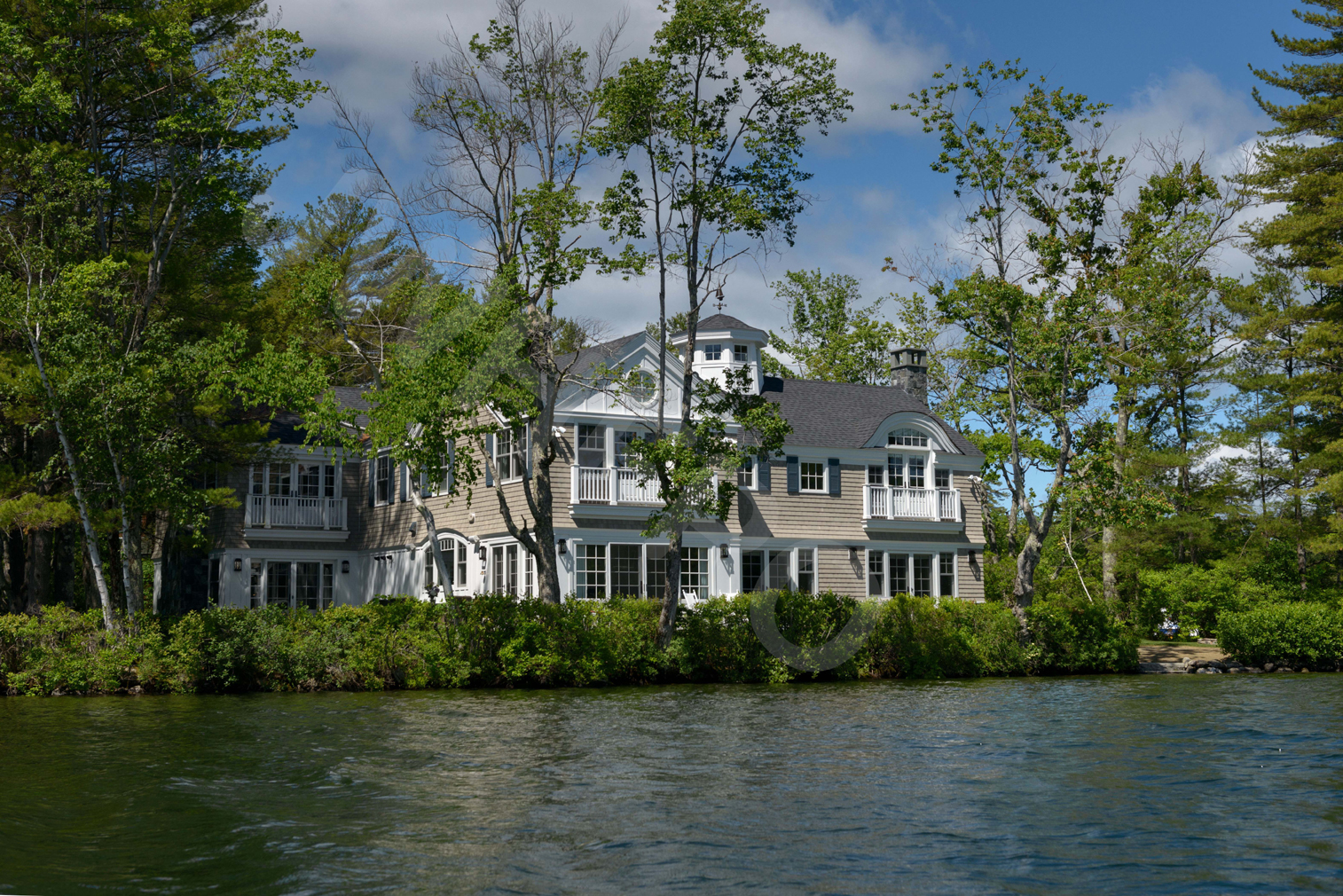 Surrounded by water on three sides, the house has lake views from most of its thirteen rooms. A notable architectural feature included by Mark Hall and Tom Samyn, of Samyn-D’Elia Architects of Ashland, is the Federalist eyebrow arch that frames some of the windows.

The canvas is a crisp white. The palette, the blues of lake water on a sunny summer day. “They are colors that really suit our eye,” says the owner of the recently built “point” house that sits on one of Lake Winnipesaukee’s protected coves.

That blue-and-white palette is part of the “beach cottage” look that the homeowner and his wife had wanted for their summer home. They also wanted the comfort and informality a beach cottage offers. “We live in a pretty formal house in the Washington, D.C., area, where everything is so fast-paced,” he says. “It’s a nice change from living there.”

Another must-have: lake views, as many as possible. Because the property is on a point, surrounded by water on three sides, most of the rooms face the lake. And the lake is close—just twenty feet away, thanks to the grandfathered setback of the original house. Windowed walls (there are forty-six windows in all) provide unobstructed views. 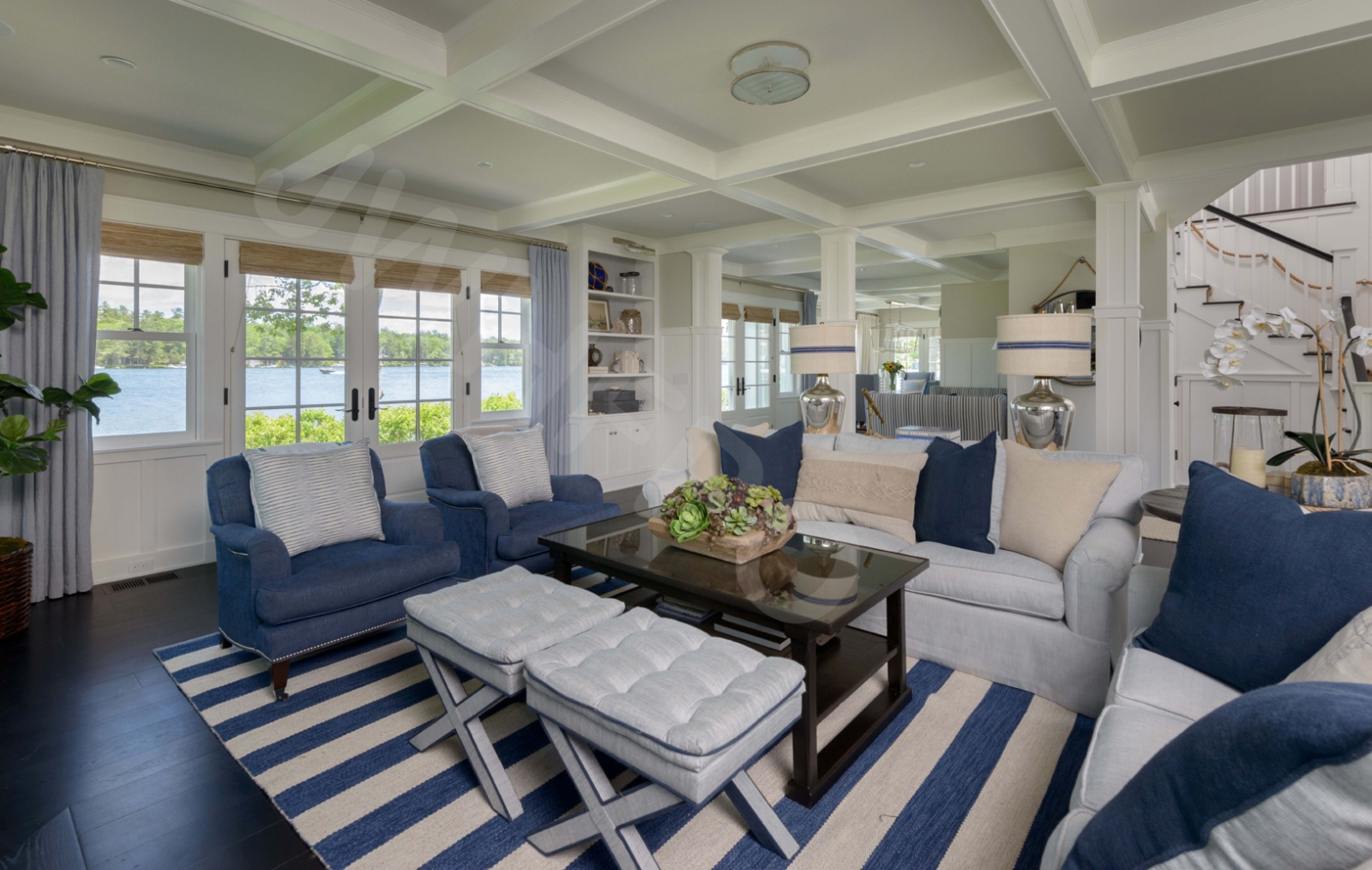 The biggest design challenge was to comfortably accommodate the large family. In the living room, two sofas, armchairs and ottomans provide ample seating. There are also two loveseats in a nearby alcove. The extensive woodworking— including a box beam ceiling—was built in place. 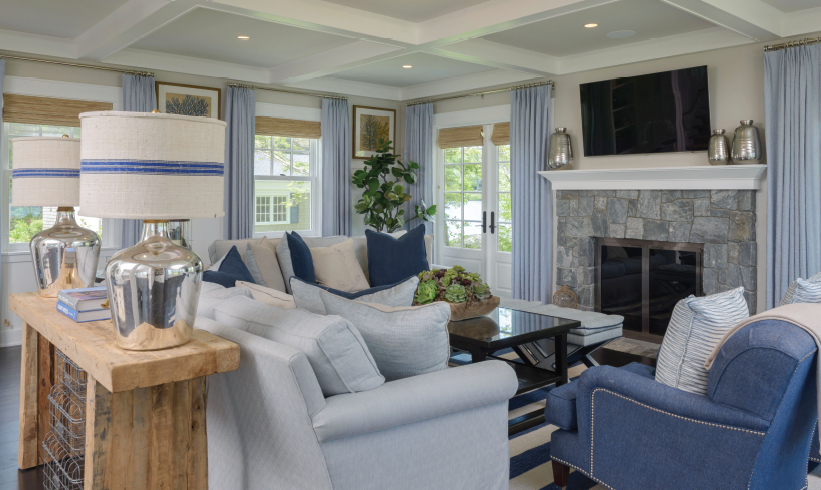 “We wanted just enough windows to bring the outside in, but not so many that the exterior gets too busy and overdone,” says the homeowner, who is a real estate developer. “We were looking for architectural balance in both form and function.”

One of those functions was to accommodate the couple’s large family, which includes ten grandchildren. For the architects, Mark Hall and Tom Samyn, of Samyn-D’Elia Architects of Ashland, the size of the family was the biggest design challenge.

Samyn says their work to “create an elegant house with a sufficient number of bedrooms for the good-sized family with a living and dining area, too,” was constrained by a New Hampshire law that requires the new house to fit in the exact footprint of the house that had been torn down.

The solution is a 4,400-square-foot, thirteen-room home that has a large bunk room for the grandchildren.

“The bunk room was designed to be fun, whimsical and gender-neutral, and to sleep a large number of children comfortably,” says Brooke Wagner, the California-based interior designer who worked on the project. Its nautical theme (note the porthole-like windows in the photo on page 68) is continued in the bunk bathroom, white with accents in navy and red, and towels that are monogrammed with anchors, sailboats or life preservers.

Elsewhere upstairs are junior master-bedroom suites for the homeowners’ adult children. Wagner says the blue-and-white striped bedding of both those bedrooms and the bunk room is meant to bring inside the “cool and calming vibe” of the outdoors.

The master suite is on the first floor, its ledgestone-faced fireplace providing warmth for cool summer nights. The bedroom’s high paneled walls, an element repeated in various forms throughout the house, complement the intricate box beam ceiling. “It was all built in place,” says the project’s builder, Kevin Beland, of Wood & Clay, Inc. in Gilford. 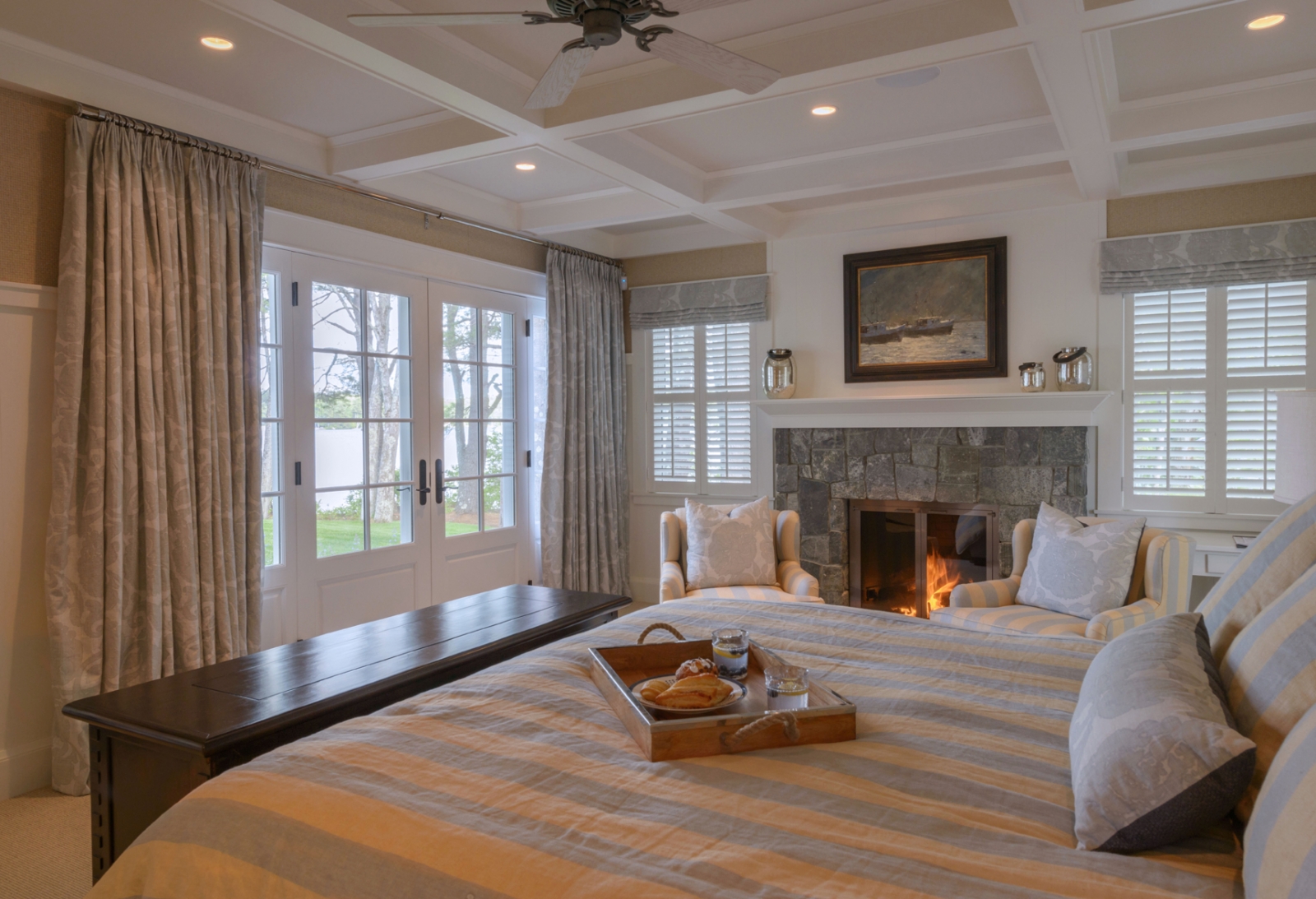 The first-floor master bedroom has stunning views of the lake, which is just twenty feet away.

Ditto for the woodworking in the great room. There, artwork is hung high to accommodate the height of the paneling. Two sofas upholstered in a Rose Tarlow blue-and-white herringbone indoor/outdoor fabric, two armchairs in deep navy, two ottomans in a micro stripe and the bold, wide-stripe carpet accomplish Wagner’s design goal of making the open-concept room “welcoming, comfortable and livable for a large family—the opposite of stuffy and pretentious.”

In a nearby alcove, the striped pattern repeats on two loveseats, which offer a cozy, out-of-the-way place to read a book or play a game.

The dining area has a large antique oak farm table with chairs in a French blue linen. “The linen has been laminated to preserve the material in a high kid-traffic area,” Wagner says. The lighting is a modern take on a classic lantern.

The French blue appears again on the kitchen’s center island cabinets—a contrast to the bright white of the other cabinets, including the one that conceals the refrigerator. The counters are topped with a honed Calcutta gold marble; the backsplash is the same marble in a herringbone pattern. The pendant lighting is a polished nickel with a white enamel shade. 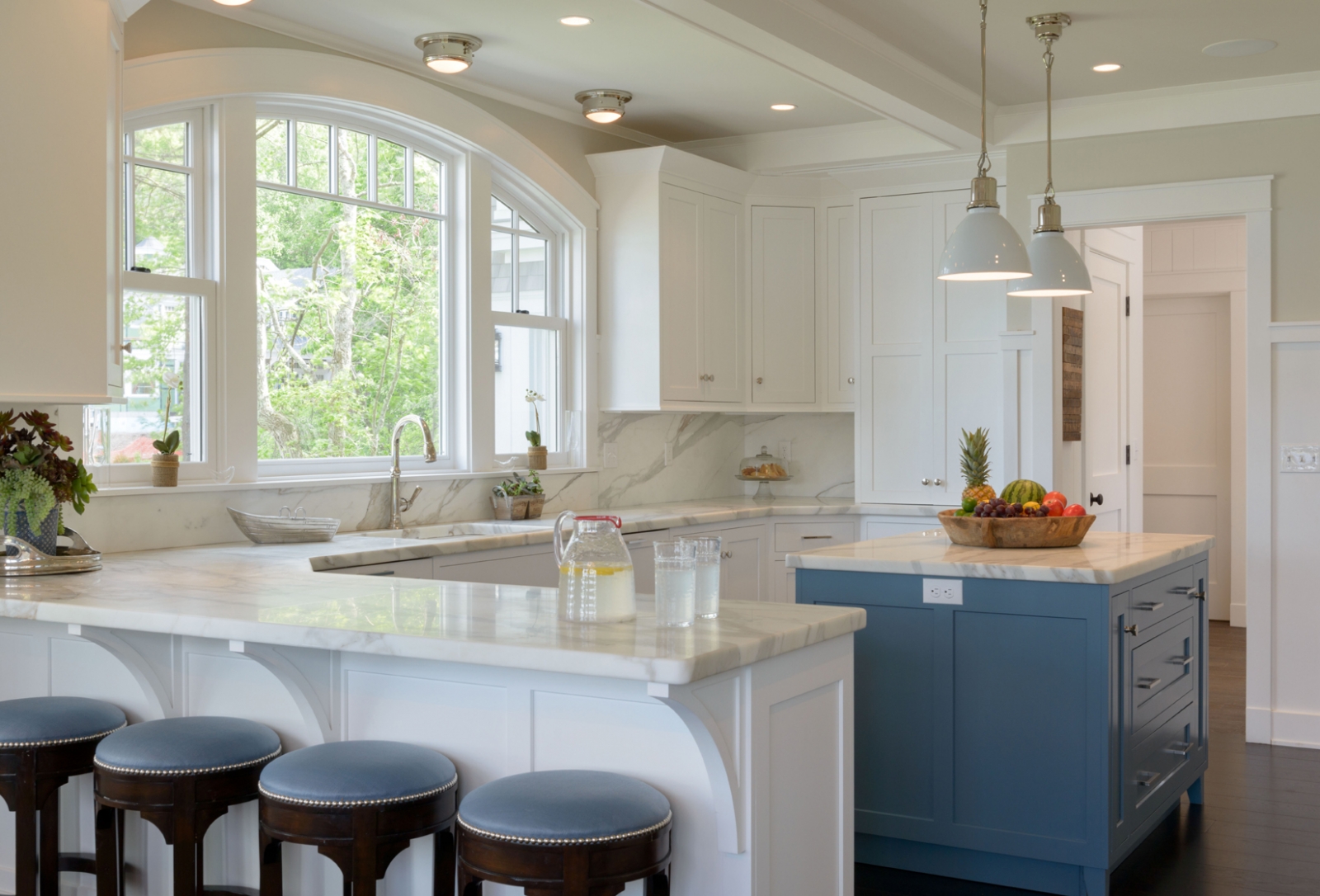 An eyebrow arch window is the focal point of the kitchen, which was designed by Philip Hunter, of Fred Varney Company in Wolfeboro. “This kitchen design needed to handle multiple young families at the same time,” he says. The French blue of the stools and center island accents the white cabinets and countertops. 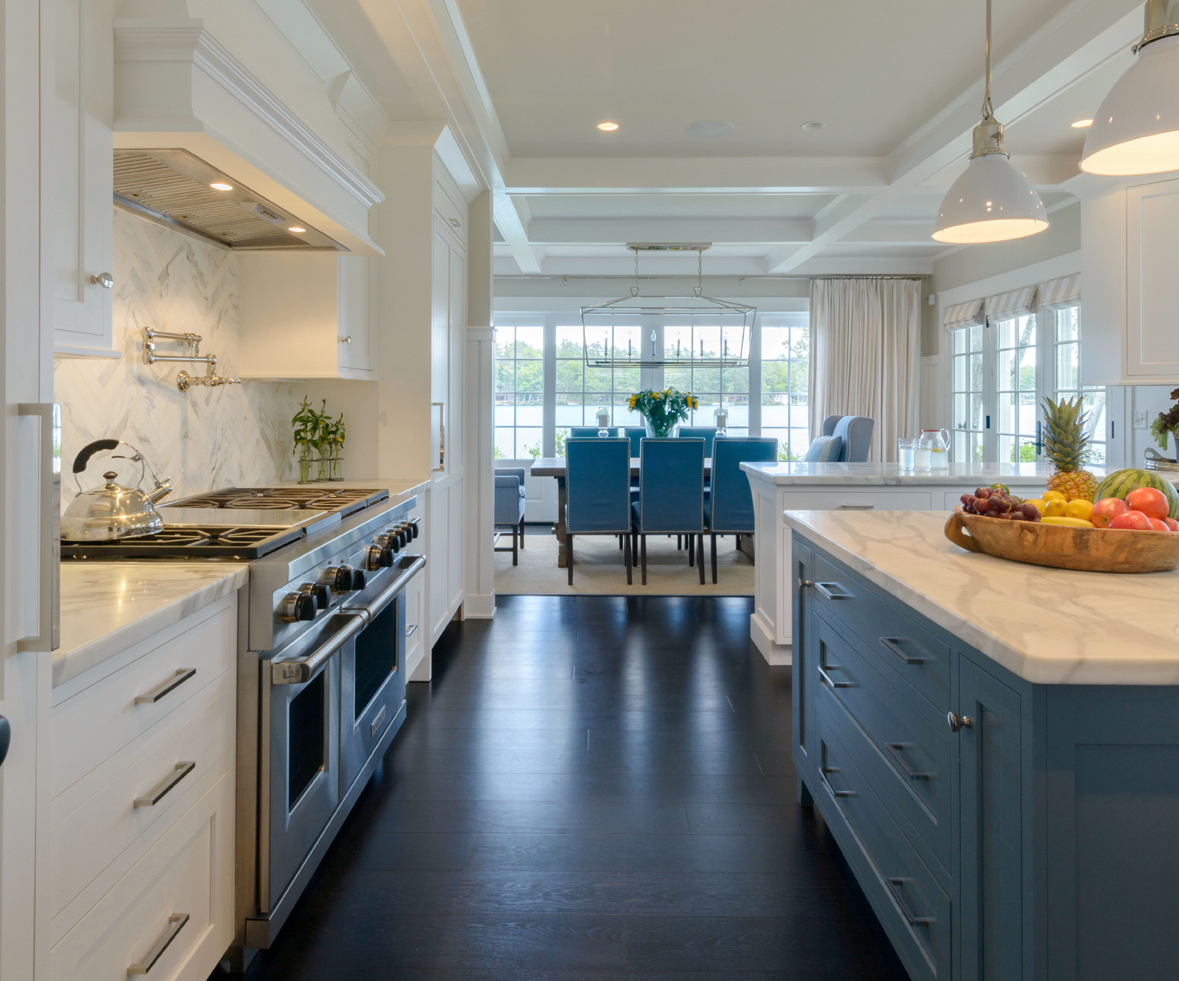 Throughout the downstairs are wideplank, white oak floors, which were stained black to set off the lightness of the décor. But it’s not a solid black. “There is beauty in the stain’s subtlety,” Beland says. “It allows the honey brown grain to come through.”

The architectural feature that Beland feels is “very center stage, very noticeable” in the house is the eyebrow dormer. It’s used above the front door in the entryway to great effect, he says: “It really gives the stairwell a different look. It’s pretty stunning.”

The eyebrow dormer in the entryway is mirrored by an arch on the exterior. Two adjacent windows also have the arch. “The arches were originated by Federalist builders during the 1800s,” Samyn says.

Federalist is just one of the architectural styles used in the design of the house. “The ‘style,’” Samyn says, “is a combination of New England styles, which are known as Victorian, including the curves and arches at the windows, an octagon-shaped cupola, and many porches.” He adds that there are also Georgian and Greek Revival elements in the design.

Whatever the element, it is maintenance-free. The Marvin windows are aluminum-clad, and the surrounds are a PVC synthetic wood made by Azek. The exterior trim and the white boards that side the lower floor of the ell are also Azek. The siding is NuCedar, which is also made from PVC resin.

“It’s as close to maintenance-free as you can get, but it doesn’t look that way,” Beland says. “There’s great variation in color; it looks like beautiful stained cedar. But, it doesn’t rot.”

One of the biggest challenges that Beland and Wood & Clay founder John Robinson faced in building the point house was storm-water management. The flat ground around the house couldn’t be graded to provide drainage because the house was too close to the lake. Complicating the situation was a high water table. 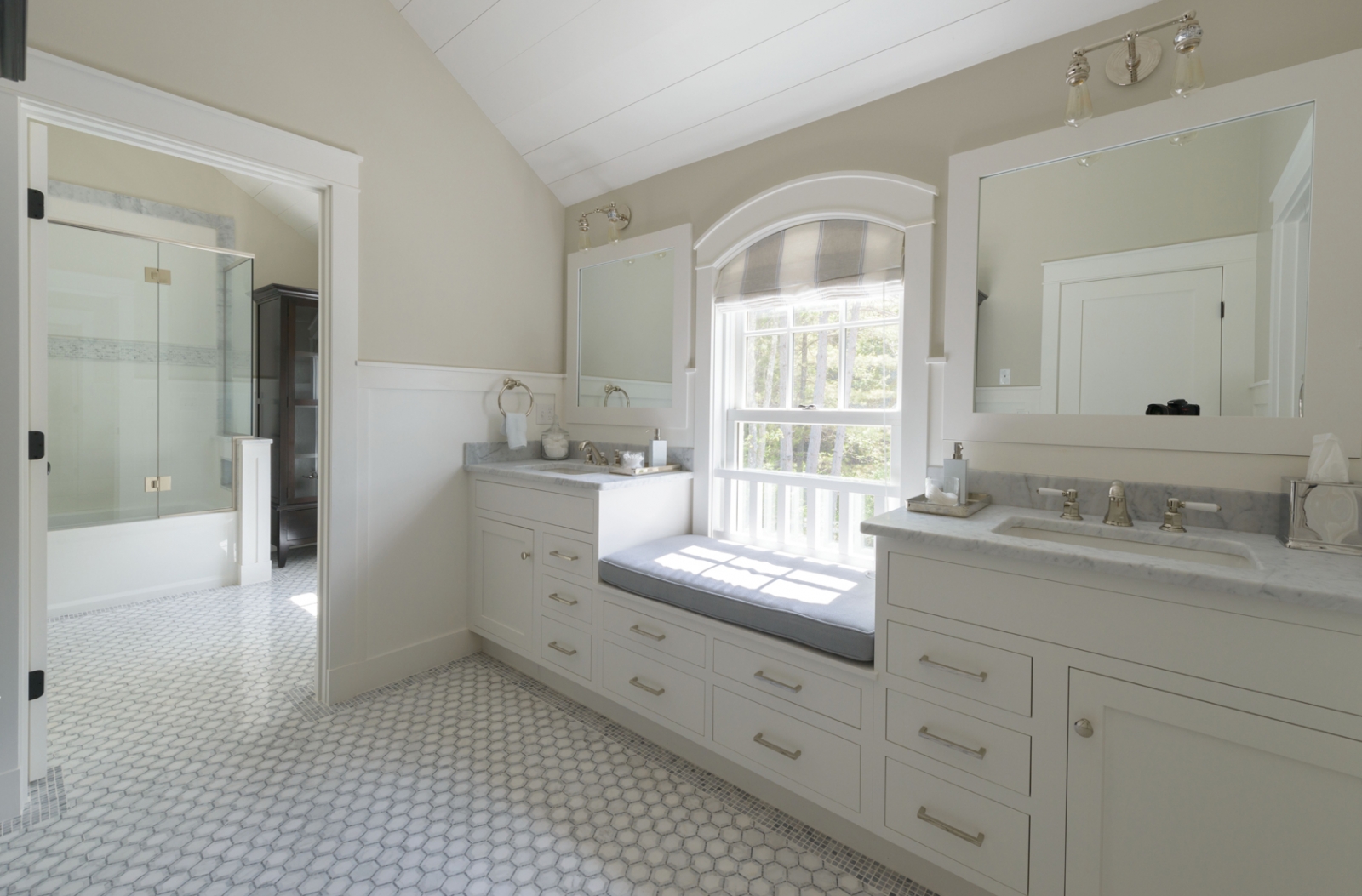 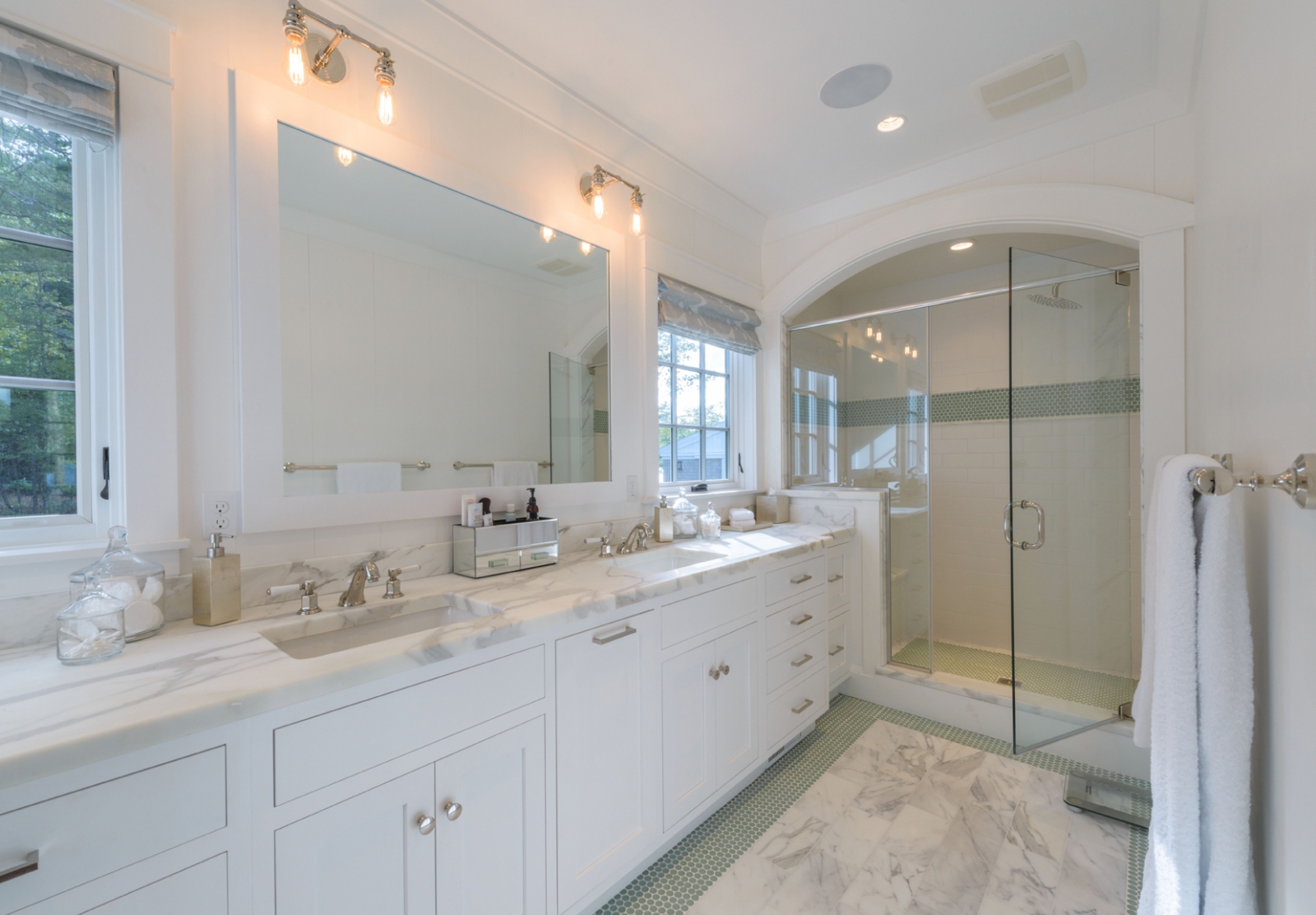 The team created a three-foot-high concrete crawl space beneath the house to provide a place for a waterproof tank where storm water can drain. From the tank, it gets pumped into an uphill filtration field. During seasonal high water, Robinson says, “the water is running into the tank all the time.”

The crawl space also contains the mechanics of the house—heating system, hot-water tank and so on. In such a small space, compact equipment is needed. Much of what was used is “made to lay on its side,” Robinson says. “The boiler is the size of a carry-on suitcase.”

Construction didn’t stop at the house—the boathouse was replaced as well. Beland says the foundation was strengthened and stabilized by pouring concrete into forms placed on the inside of the existing boulder foundation. “We built up from there,” he says.

It was up to Eric Buck, the principal landscape architect and owner of Terrain Planning & Design LLC of Bedford, to put the finishing touches on what he calls “the outdoor living environment.” Starting on the perimeter, Buck planted groves of blueberries and elderberries to integrate the house into the wooded area.

A narrow perimeter lawn stretches into a substantial lakeside yard next to the great room. There, Buck created an “outdoor room” with a bluestone patio and nearby fire pit. The patio’s zero-step clearance to the lawn makes it “more user-friendly for younger and older folks,”Buck says.

The surrounding shrubbery is native—much of it low bush blueberries, dogwood and sheep laurel. And, because the homeowners enjoy gardening, Buck used ornamental plants—such as daylilies, hydrangeas and beach roses—to give pops of color throughout the property.

Buck also used an ornamental palette around the bluestone pathway that goes to the front door. “The homeowners wanted things in bloom when they were there in the summer,” Buck says. To span the season, he planted perennials, flowering deciduous shrubs and ornamental trees.

All the design elements of the house came together in a way that pleases the homeowner. “We love it, absolutely love it,” he says. “It was a great team, very collaborative.”

Now, he says, the grandchildren can enjoy the special experiences he remembers from his visits to the lake as a child.

“It is a wonderful, fabulous, beautiful place,” he says. “We’re happy campers up there.” 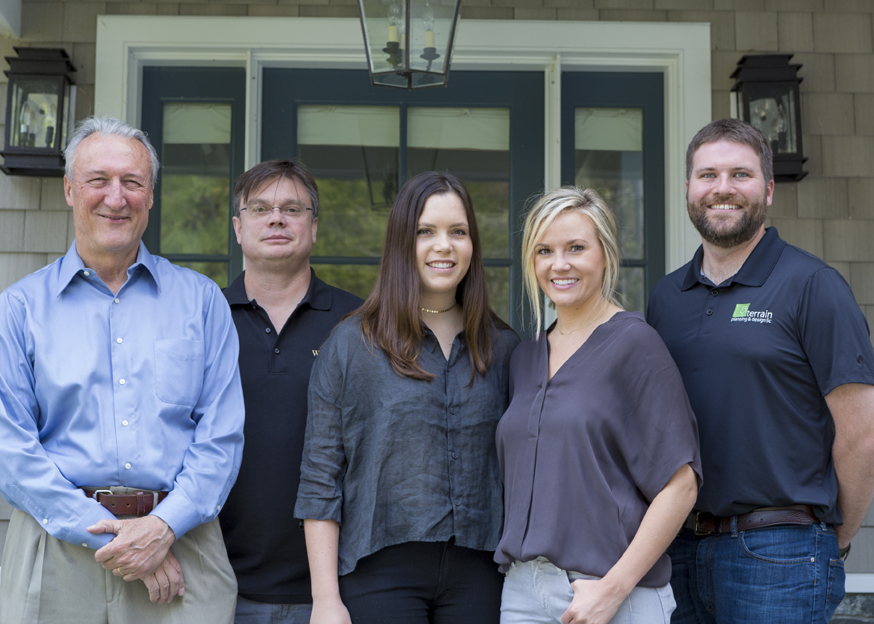 Members of the design team include, from left, Tom Samyn, of Samyn-D’Elia Architects in Ashland; Kevin Beland, of Wood & Clay, Inc. in Gilford; Elise Schroeder and Marika Olson, both of Brooke Wagner Design in Corona del Mar, California; and Eric Buck, of Terrain Planning & Design LLC in Bedford. 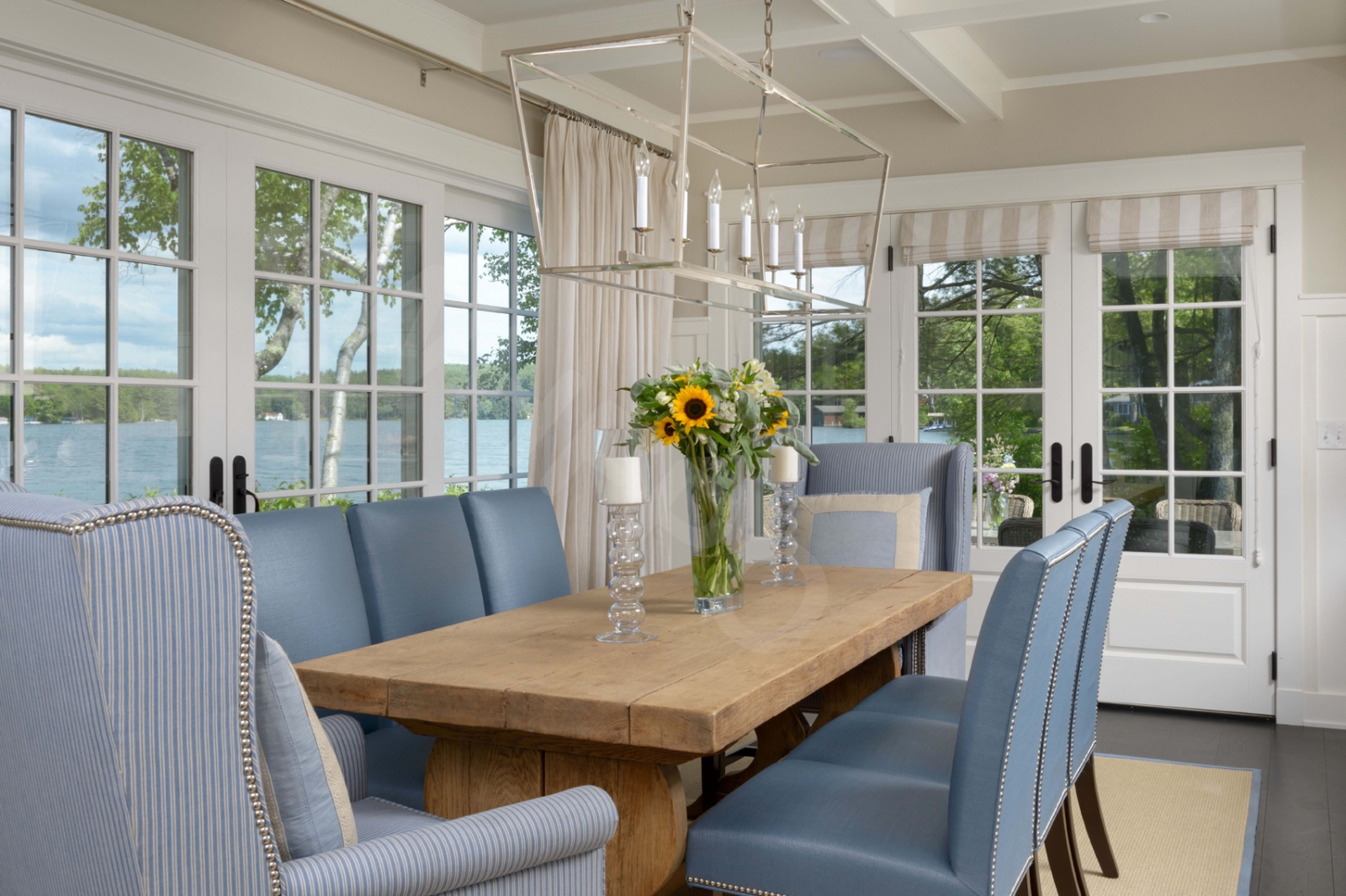 In the adjacent dining room, the chairs at the antique oak farm table are covered in French blue linen. The lighting is a modern take on a classic lantern. 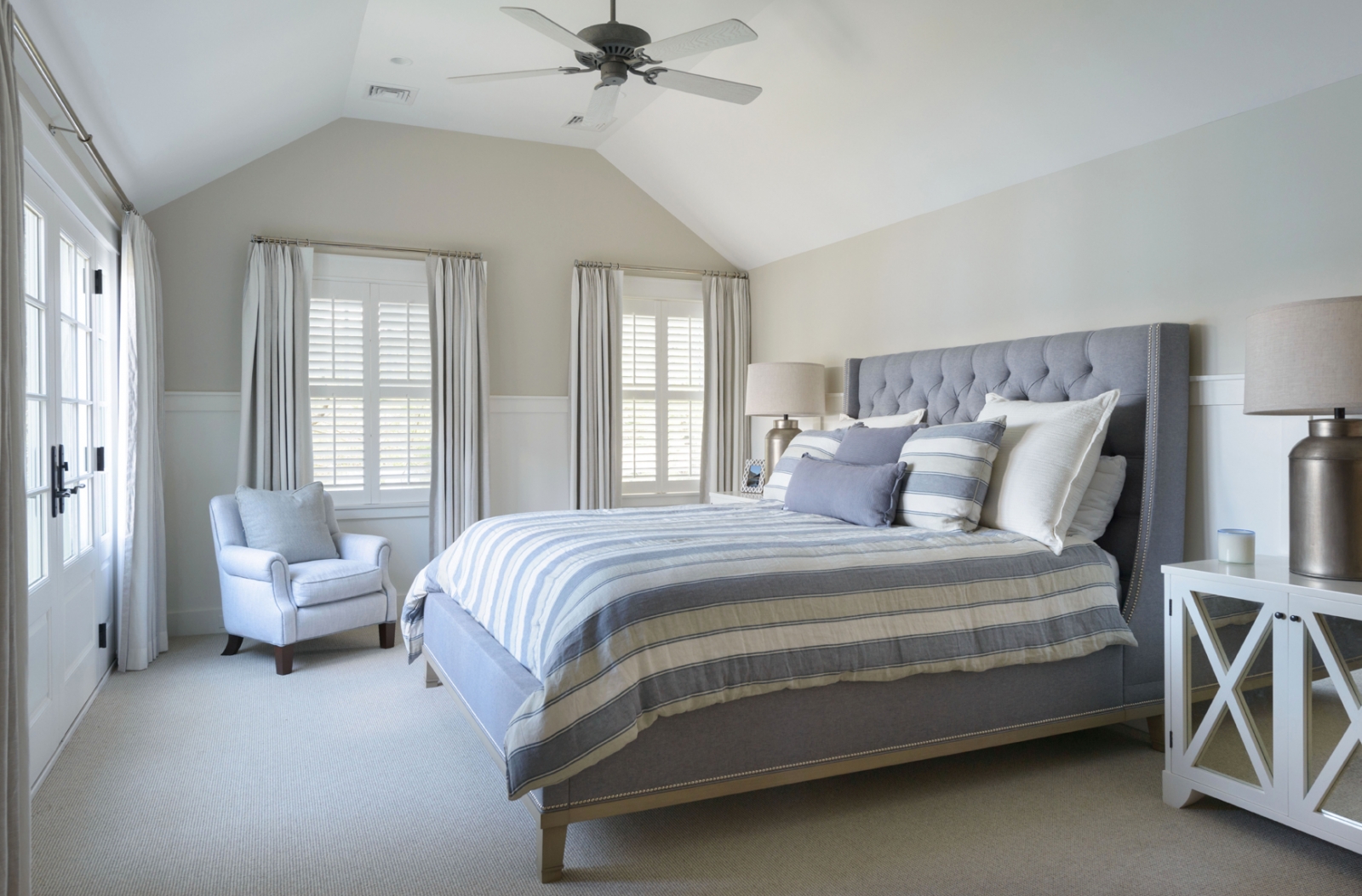 Blue-and-white striped bedding provides a soft contrast to the neutral walls and draperies in the junior master bedroom. 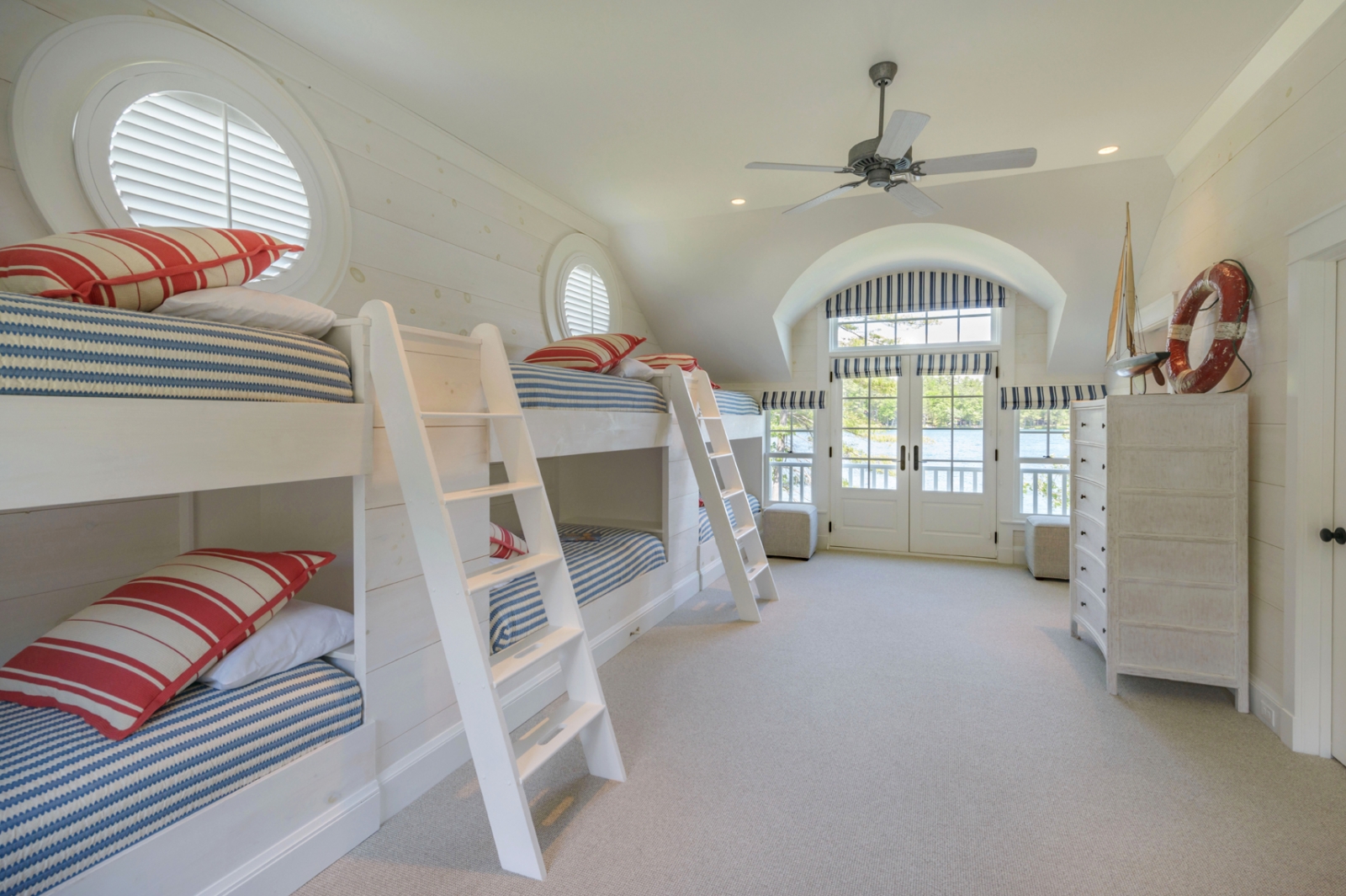 A large bunk room helps to accommodate the ten grandchildren. 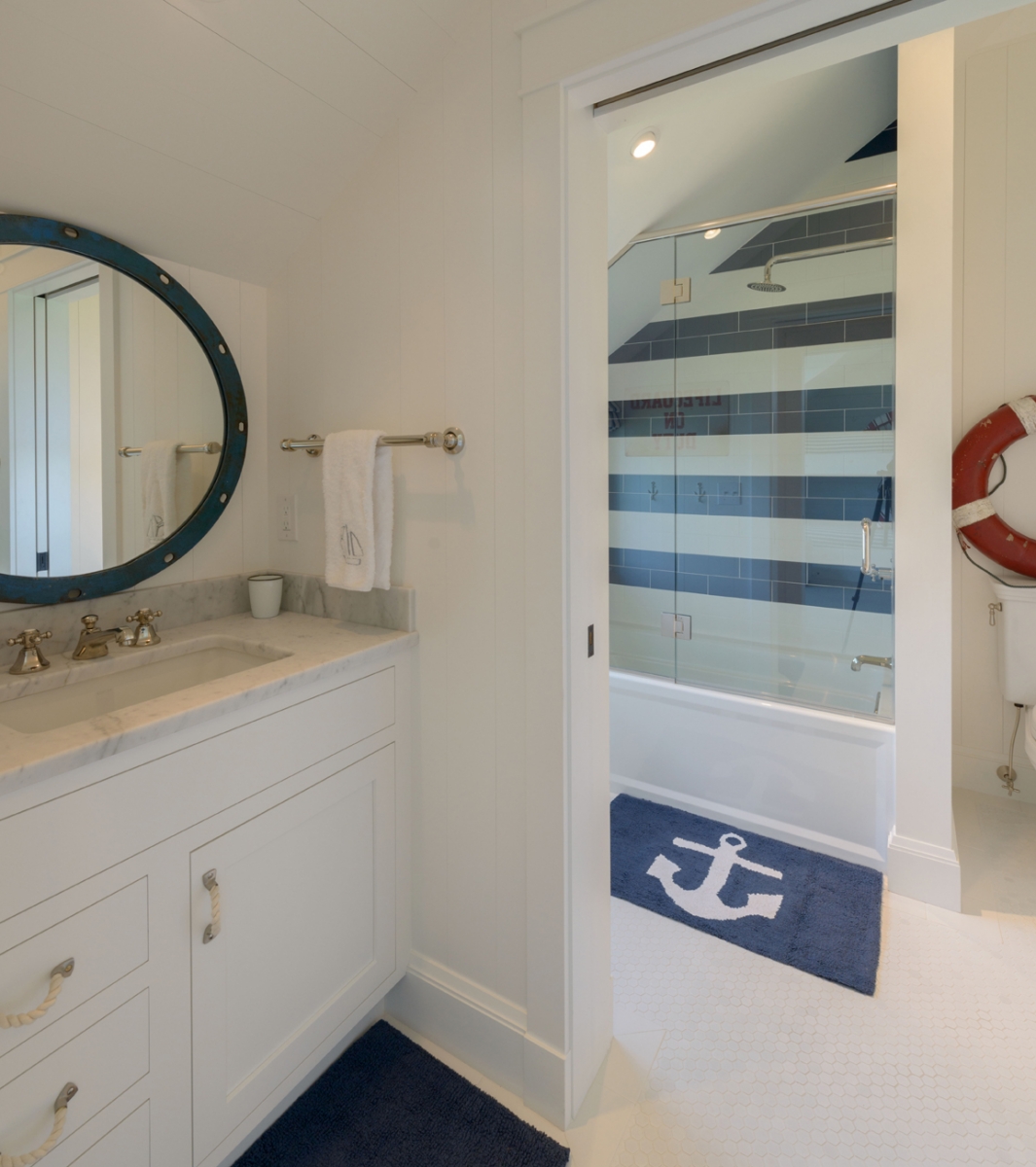 The bunk room's nautical theme is repeated in the bathroom with towels monogrammed with anchors, sailboats or life preservers. 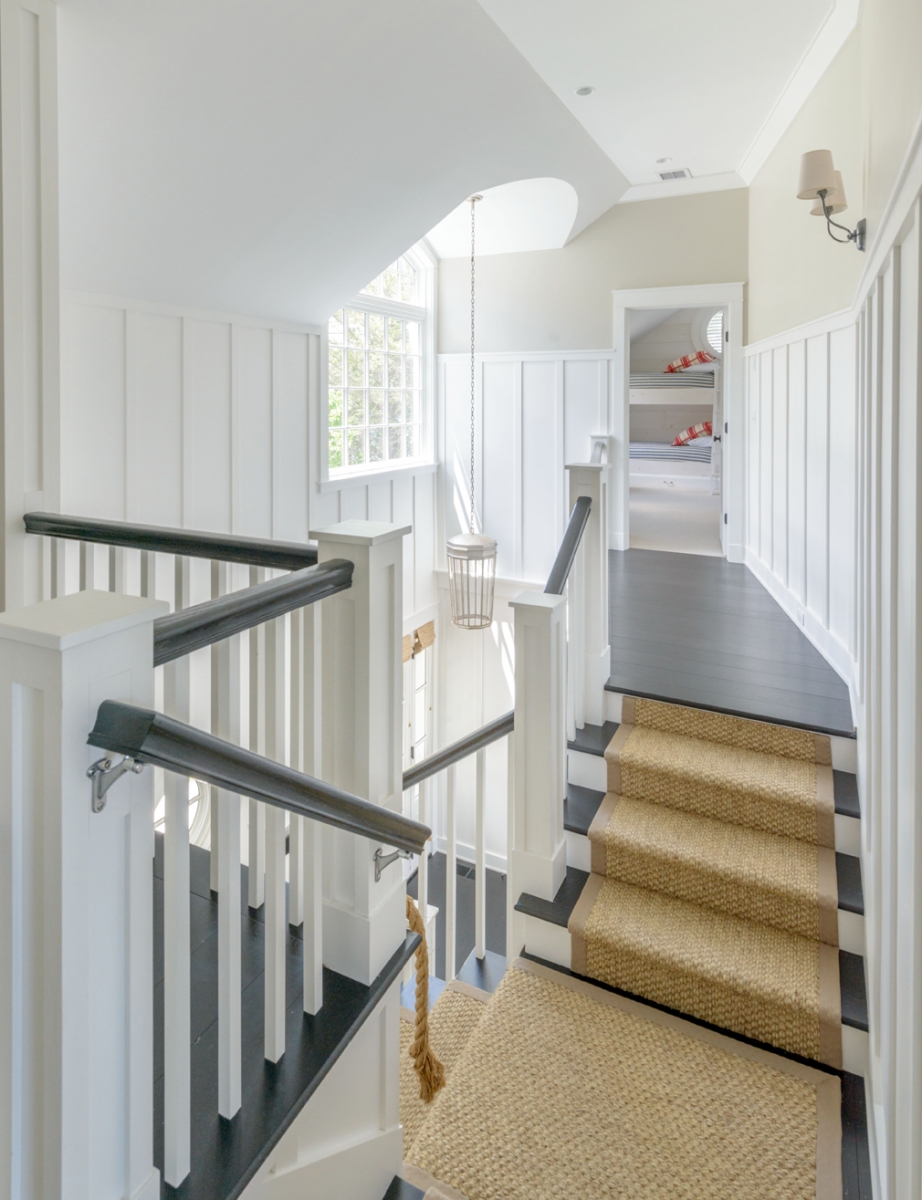 An eyebrow arch dormer in both the bunk room and over the staircase in the entryway add architectural interest. 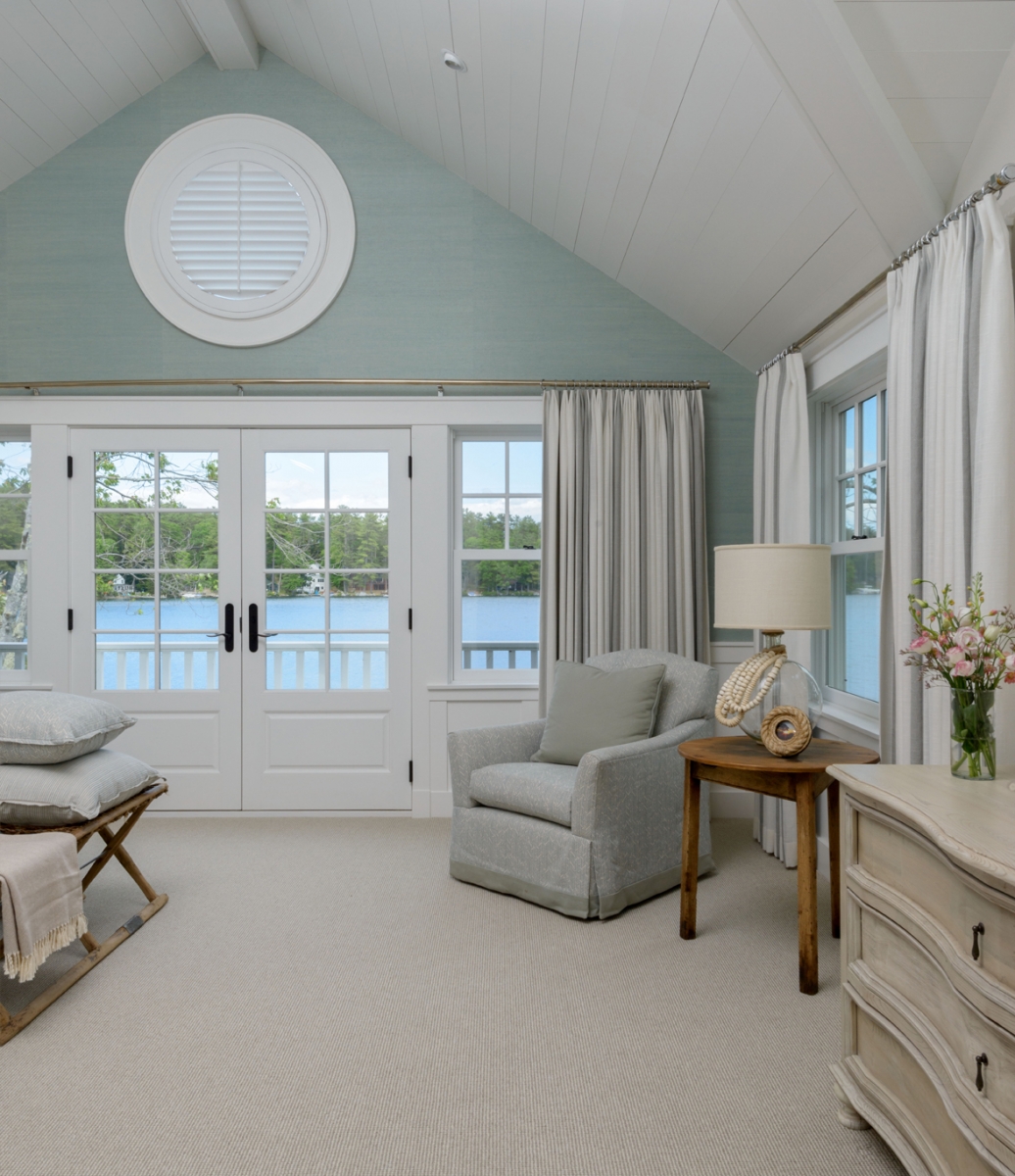 A neutral palette allows the focus to be on the blue of the lake. A porthole-like element above the French doors carries on the nautical theme.
Categories: Architecture and Interiors