A library designed by artists, for artists

Renowned architects help connect an historic library to the future 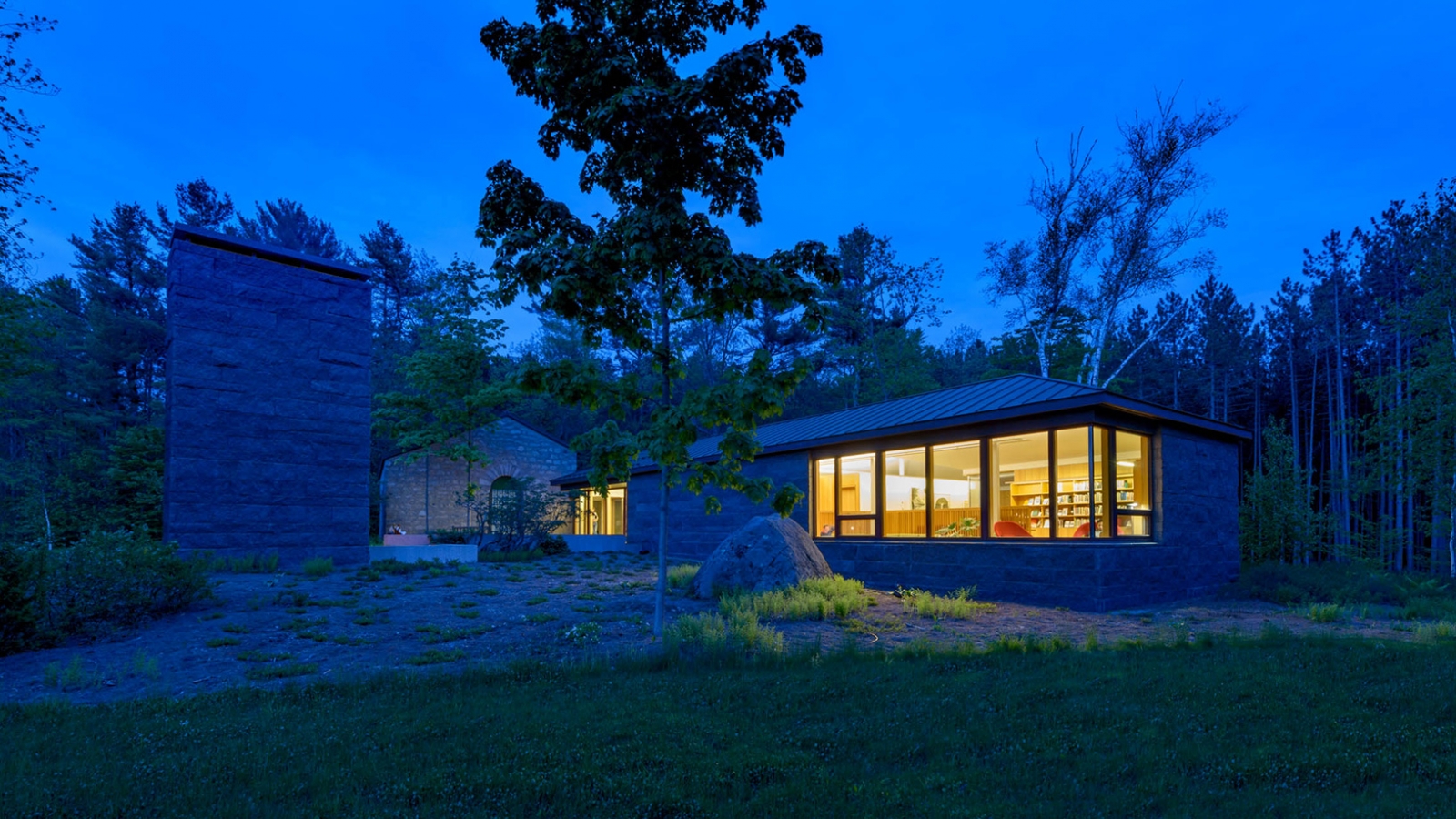 The new fireplace, on the left, and the addition with its large windows flank the historic Savidge Library (in the center) at the MacDowell Colony in Peterborough. Architect Billie Tsien of Tod Williams Billie Tsien Architects/Partners in New York City says that “the new outdoor fireplace makes this place of communal gathering a symbol for what happens inside.”

Technology has changed the way we communicate and learn new things—as well as the spaces in which we live and work. And that is the short answer to why the MacDowell Colony in Peterborough decided to build an addition to its historic Eugene Coleman Savidge Library. As this country’s premier residency program for artists, MacDowell’s goals for the project were to accommodate artists’ needs in the digital age as well as have the library become more than just a space to read and store books.

And because of its deep commitment to the arts, MacDowell treated this endeavor the same way it chooses its resident artists: with thorough research and lots of discussion. “Because architecture is one of our disciplines at MacDowell,” says Executive Director Cheryl Young, “we wanted our fellows to feel the presence of good design in this building.”

After reviewing the work of eight award-winning architectural firms, MacDowell commissioned the New York City-based firm of Tod Williams Billie Tsien Architects/Partners. Headed by husband-and-wife architects, the firm has won international recognition for its work, and Williams and Tsien have each won National Medals of Arts here at home. Among their projects are The Barnes Foundation in Philadelphia (2012), the First Congregational United Church of Christ in Washington, D.C. (2011); and the atrium at Lincoln Center (2009) and the American Folk Art Museum (2001), both in New York City. Here in New Hampshire, the firm is currently working on the Center for Theater and Dance at Phillips Exeter Academy, scheduled to be completed in 2018, and an expansion of the Hood Museum of Art at Dartmouth for 2019.

More important, Young says, is that Williams and Tsien “got MacDowell.” They understood how the addition should be distinct from, yet connected to, the old library and other buildings at MacDowell. They also knew that an architectural work of art would fit right in at the colony.

Built in 1928 from granite quarried on the Peterborough property, the historic Savidge Library functioned as a reading room and space for presentations. Although it had bookshelves and some easy chairs for reading, it didn’t have a way to archive visual or performance art. Most of the time, the space worked fine for presentations, but with the main door located in the center of the building façade, gusts of cold air, rain or snow could blow in to the room if someone arrived late.

Young and the design committee wanted the new building to provide both community and solitude as well as beauty and functionality. A conversation area would allow artists to talk with others while there. Private areas would allow artists to read or work. And finally, a library for more than just the written word would function as a repository for all the colonists’ work.

So Williams and Tsien set about renovating the old Savidge Library and designing a 2,900-square-foot addition to it, which was completed in 2013. In the old building, Williams and Tsien installed new white oak floors, added an audio-visual system and removed the front door. The entrance to the library would be located in the addition, where people can take their coats off, talk and not disrupt a presentation. “This makes a huge difference to the flow of people in the space,” Young says.

Tsien says she and Williams “wanted to design an addition to Savidge that felt warm and inviting, and had places where one could be alone and places to be with others.” Williams and Tsien sited the addition back from the older stone building, as to not overwhelm it. Large windows frame views of the landscape and supply lots of natural light.

Although not big in square footage, the new building makes tremendous use of its space. It provides an additional 700 feet of linear shelving for the library’s collection; eight desks and several other areas provide places for reading, writing or conversation; a comfortable couch and lightproof curtain create a screening area; two soundproof rooms let artists do audio work, listen to music or watch films; and the hallway doubles as a gallery for fellows’ work. Plus, unlike the studios where there aren’t any Internet connections (although some have cell service), artists can plug in to the Internet any time in the new building.

Today, artists from all disciplines contribute works to the library’s collection. “It was hard to represent our fellows’ work with just books,” Young says. “Now the library has work by composers, photographers, filmmakers, visual artists and performance artists, and all that work is accessible to the artists here at MacDowell.”

But the story doesn’t end with marvelous changes to the interior space. Williams and Tsien also created a wonderful place for artists to get together outside the addition. Because the fireplace in the old building was no longer being used due to conservation issues, the architects designed a new, larger outdoor fireplace off the entry to the new building. The thirty-foot-tall, freestanding chimney is made from the same Boreal Green split-face granite as the addition, which, like the stone for the old building, was quarried nearby. “This new, large outdoor ‘fireplace’ makes this place of communal gathering a symbol for what happens inside,” Tsien says. 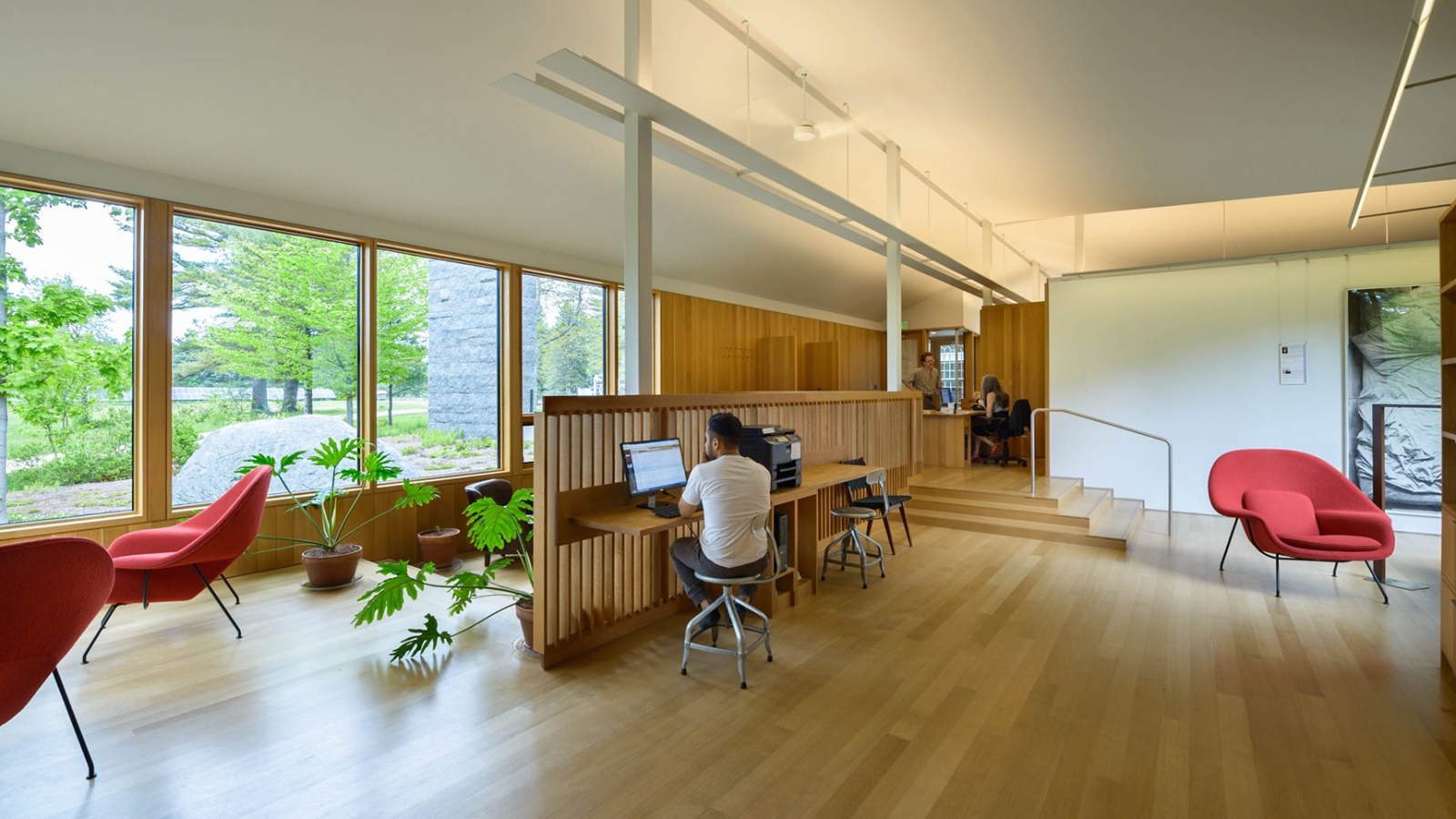 Once every year, in mid-August, the MacDowell Colony invites the public to attend Medal Day, an annual event held since 1960 that recognizes an artist for outstanding contribution to his/her field. Among winners in past years were Leonard Bernstein, John Updike, Georgia O’Keeffe, I.M. Pei and Merce Cunningham. The presentation takes place at 12:15 p.m., and after a picnic lunch (visitors may bring their own or order a picnic basket from MacDowell, like the ones served to colony residents), guests are invited to drop in on any of the thirty-two artists in their studios. The event is free and open to the public. 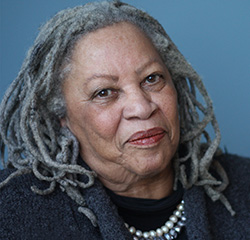 On Sunday, August 14, author Toni Morrison will be celebrated as this year’s medalist. Morrison won a Pulitzer Prize in 1988 for her novel Beloved and was the first African American woman to receive a Nobel Prize in Literature, which she won in 1993. Now in her eighties, she is professor emeritus at Princeton University and continues to be one of literature’s great storytellers. Her most recent novel, God Help the Child, was published in 2015.