A look at the home of NH architect Dan Scully

To design his own home, Dan Scully—one of the state’s great architects—was inspired by his love of classical architecture and classic cars. 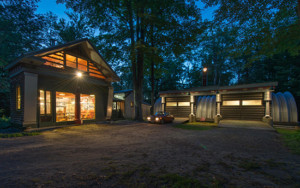 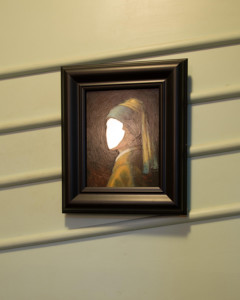 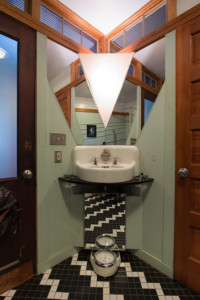 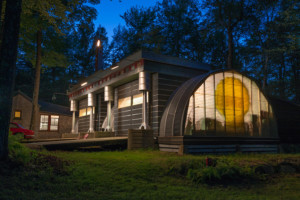 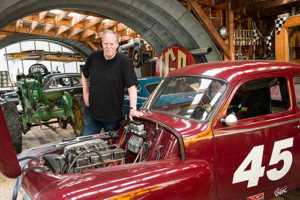 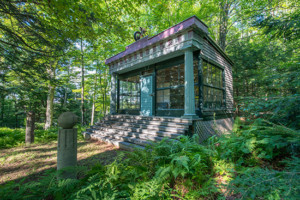 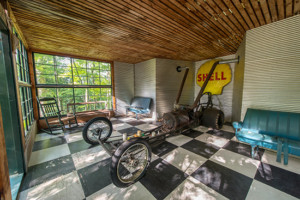 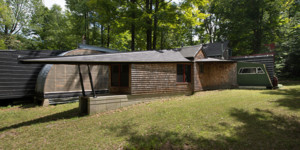 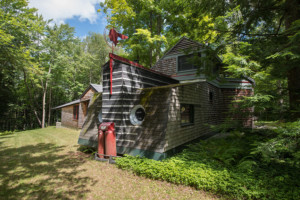 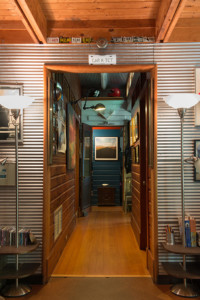 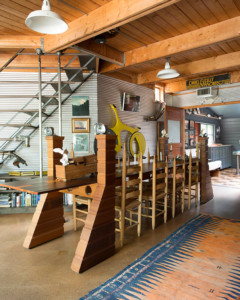 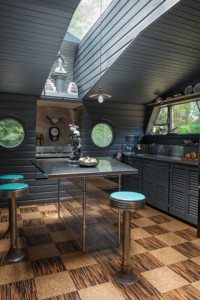 When Dan Scully was eight years old, his family sailed to Europe on one of the last great ocean liners, the Ile de France. His father, the beloved Yale professor of architectural history, Vincent Scully, had a Fulbright fellowship to study in Florence, Italy, for a year.

You might say that architecture is the family business, but the family business is really about noticing—observing and celebrating the world. Vincent is a great noticer. What he sees in Shingle Style houses, for example, has animated his lectures and books.

At age eight, Dan was already in the family business. He’d go down to the engine bay of the Ile de France to watch the huge pistons and connecting rods go up and down. Early on, Dan had an eye for machines and motion. This would blossom into an understanding of America’s secular faith: the romance with cars and roads, and before that, railroads and canals—anything that would “annihilate the distance” as they said in the late nineteenth century.

The ship’s towering engine was the inspiration for the four, large piston-and-connecting-rod columns on Dan’s garage. “It’s the one column Vitruvius forgot,” Dan, now sixty-nine and one of the state’s leading architects, jokes about the Roman author who set down the principles of classical architecture. In that joke is the seed of Dan’s home. His house and grounds is an essay about the American road as it collides with the old classical order.

The garage is built as a temple with the proper Doric entablature. On the frieze where the sculptural story would be—think of the procession of horses and men who once graced the Parthenon—Dan has lined up license plates, moving east to west. An art deco gas pump tops the temple, taking the place of a statue of Winged Victory. The ramps leading from the garage also go back to that childhood year in Italy.

He saw the Mille Miglia, the famous one-thousand-mile-long auto race around Italy. “I saw it go through Florence. And as a kid, if you don’t catch the fever from the Italians, you’re not going to catch it,” Dan says. “The cars that start in the Mille Miglia start on a ramp individually. The ramps coming out of the garage are similar. So, I had images of my son and me racing off in the morning.” His son, Michael, also caught the fever; he is the creative director of DesignWorksUSA, BMW’s California-based design group.

Dan’s visitors usually begin their tour at another temple on his land—a temple to the Gods of Speed. A walk down a classical allée lined with white birches leads to a small shrine with Doric columns. Open the door, and a dragster is coming right at you. “It’s the most American of vehicles, the quarter-mile drag-race dragster,” Dan says. It’s a showdown race, “two gunfighters on Main Street. And it’s facing due west. A complete contradiction of terms: the stable and the dynamic. The classic temple with a burst of energy of moving west in your vehicle.” The allée turns out to be a drag strip. 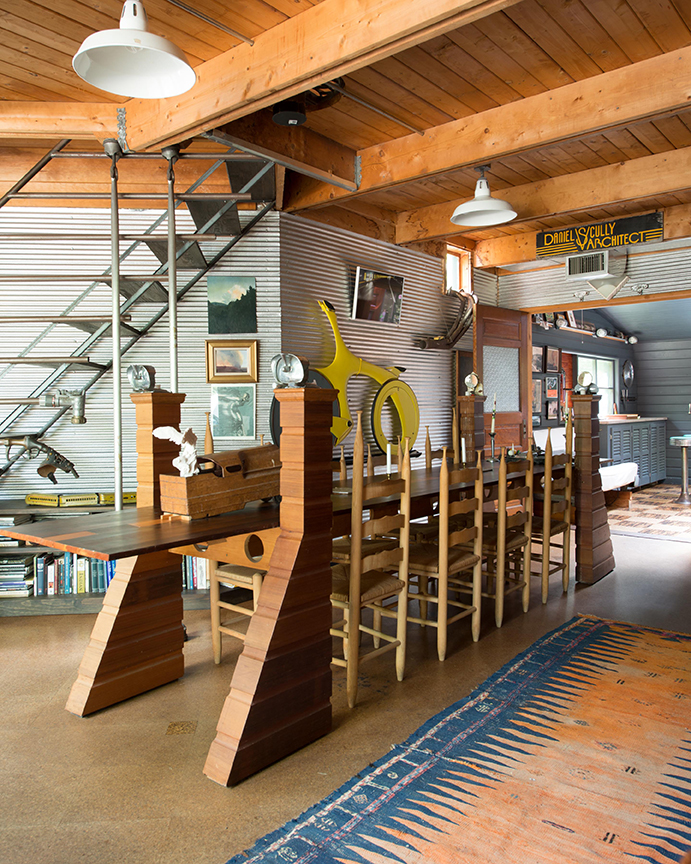 Dan Scully designed this “bridge table.” The table is the road and the chair backs follow the catenary curve of a suspension bridge’s cables. Scully built the table with carpenters Franklin Burnham and Richard Pisciotta.

At the other end of that allée/drag strip, visitors catch up with his house—or try to. It’s racing away from them. “The west end of this house looks like it pulled away from that temple,” Dan says. “The temple was the mold for it. The antithesis of the columns is still here. And the classic gable end, and the triglyphs and metopes are all there. And this house takes all that—and the vertical windows—and, like a kid’s toy, transforms itself over its length to a speeding vehicle now roaring west with the Pontiac hood ornament leading the way.” The classical order is stripped off; the windows are horizontal with some tail-fin trim. The front of the house has a grill like a 1940s LaSalle.

“If Ferraris look fast just standing still, why not architecture as well?” Dan asks. “I like both, the combined juxtaposition of the classical and the vehicular.” In that juxtaposition lies the story of how we have settled and unsettled this country. “America is a fast, hard and restless place carved out of the wilderness, where the European notion of social places as a fixed piazza has been redefined into moving along Main Street,” Scully has written in a Japanese architecture magazine. “Cruising Main Street is the American notion of ‘place.’”

In the nineteenth century, that street was often a string of borrowed classical temple fronts used “to prop up an image of stability for an infant nation,” Dan says. At his house, he’s mixed the two: the backdrop that annexed antiquity and the love of leaving, the nation of immigrants always on the road.

To call the house an “essay” may be too formal. It’s more like an architect riffing, thinking aloud. It’s serious play. Some of the rooms made use of what was on hand, such as his recently added bedroom, which was designed around windows left over from designing a client’s house.

The house itself began as a garage. He had wanted to build a house, but life had other plans, and after his wife left to take a job elsewhere, he moved into the garage. There was no heat or plumbing. He’d break the ice in a bucket sitting on a table saw to wash his face in the morning. The next year, he built a small kitchen and bathroom. When Michael moved in two years later, Dan built his son a bedroom and later finished it off with a bathroom. By then he’d lost his garage, so in 1990, Dan built the garage/temple and racing took his and Michael’s time. Think of it as an architect’s theater improv. “So much of the house is designed and built around things I had, I’d collected, or had fallen into my life one way or another,” Dan says. When he talks, he’s always sketching on whatever’s available. He’s never far from designing and building. It’s what architects do, and without a client to shelter, they like to experiment.

This is not at all what Dan has designed for his clients in more than one hundred houses, and fifty commercial and institutional buildings in the thirty-two years that he’s run his own office. The many awards that Daniel V. Scully/Architects of Keene has won speak to the sensitivity of the design to a client’s site, the great care to set the new in the context of the old, and the dedication to apply the latest techniques for energy efficiency. Dan has “consistently endeavored to produce high-quality work that is environmentally responsive,” the New Hampshire chapter of the American Institute of Architects said in 2009 when honoring him with the organization’s highest award, the Clinton Sheerr Award for Excellence in New Hampshire Architecture.

For the twenty-five years I’ve known Dan, many of the houses he’s designed have a sense of movement, that bit of American restlessness that plays off a sense of arrival. There are wide porches facing lakes, houses courting mountain views, a fresh use of the Shingle Style and not a piston-and-connecting-rod column in sight. But on the weekends, you’ll often find this green architect at the track, racing his maroon 1959 Volvo, going like hell.

More photos from this article