A magnificent home in a majestic setting

A couple who appreciate comfort and style build their dream house from the ground up with creativity and collaboration. 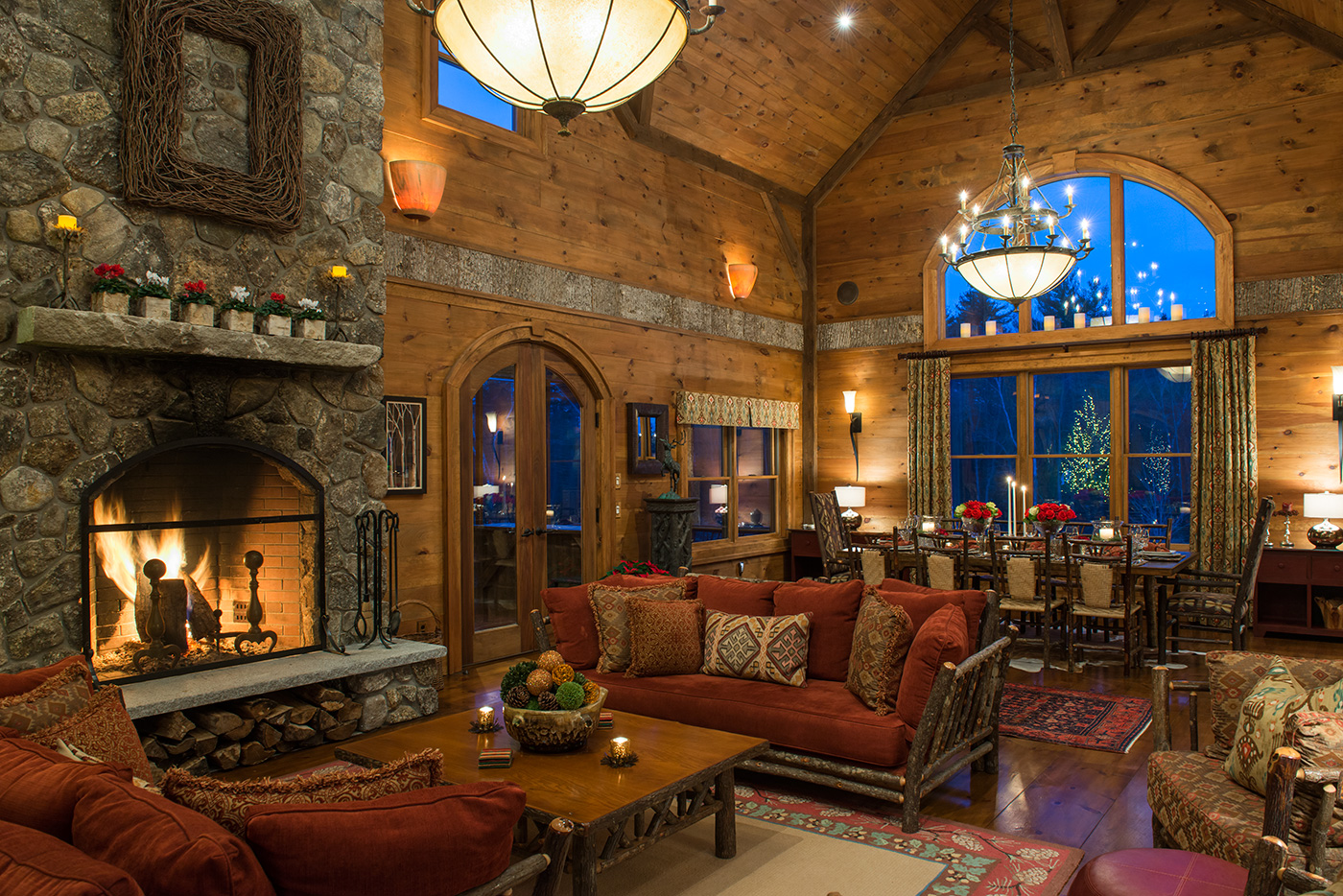 Red and white cyclamens and roses signal the season. Outside, a holiday tree sparkles. Inside, softer lights create a warm glow from the turned wooden wall sconces by Peter Bloch as well as the chandeliers, candles and ceiling lights. With a raised hearth, the fireplace can be seen throughout the room.

Built with wood and stone from the Lakes Region, the house seems to be a part of the ridge itself. A massive chimney and square tower anchor the home, yet both lead one’s gaze up to the mountain sky.

A curved roof over wide stone steps welcomes guests to the shelter of an open porch. Inside a series of generous, well-defined open spaces make socializing easy.

For the holidays, David Cleveland and Robert Jensen have kept it simple. “The house speaks for itself,” Cleveland says. Inside, in the corner, a small grove of lighted trees mirrors the snowy scene just outside the window. The effect is magical and fun, like a small stage set. “The cut evergreens are from the property,” Jensen says. “As are the central birches. Plus we added a couple of lighted ones from Restoration Hardware to give it a little sparkle.”

“We’ve had big decorated trees in the past,” Cleveland says. “In the words of Elsa from Frozen, ‘Let it go!’”

“This is a relaxed way of going about the holidays,” Jensen says. “A warm fire, a pretty lit tree outside, fresh flowers, candles, great music and good food are all you need. At this stage in our lives, it’s about gathering with family and friends.” 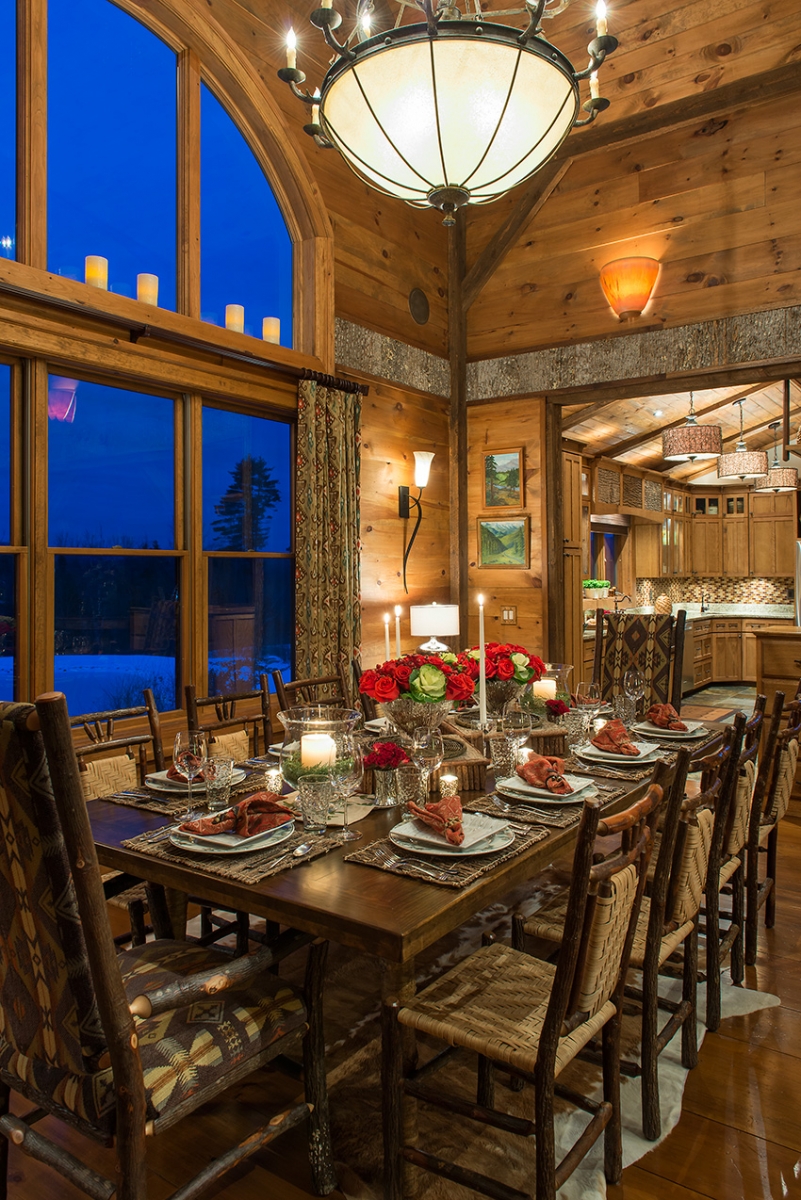 The scene is set. Time to relax, be with friends and family, sit by the fire and share great food together.

Cleveland and Jensen have been together for twenty-six years. In August 2013, they got married at home just two years after the house was completed.

Both had decades-long, successful acting careers in New York theater. Cleveland appeared on Broadway in Andrew Lloyd Webber’s Phantom of the Opera. For ten years, he performed all the male roles in all four productions of Phantom in North America. Jensen’s career took off with roles in Secret Garden, Kiss of the Spider Woman with Chita Rivera, Jekyll and Hyde, and Red Shoes.

In the early 2000s, the couple began to consider their next moves. Cleveland and Jensen had already restored an old house in the Hudson Valley. For a time, Jensen ran an antiques business in the Berkshires where his home styling was featured in This Old House Magazine.

They scouted several locations, before walking land in Wilmot that belonged to Cleveland’s family. Cleveland—who grew up in New London—is the son of the late Jim Cleveland, who for twenty years was the U.S. representative for New Hampshire’s Second Congressional District. His family’s roots run deep here.

There was an old road on the property, so they hired a logger to do a little cut through and rented a cherry picker. “We thought we would be able to see Kearsarge but not much else,” Cleveland says. As it turned out, there were views of Mount Kearsarge, Ragged Mountain, Mount Sunapee and Cardigan Mountain.

In 2009, Cleveland and Jensen broke ground and began to build. “We wanted the house to be New Hampshire made,” Cleveland says. “And we were ready to put in a lot of sweat equity.”

The garage came first and proved to be a successful venture for their builder, Benedict Brothers Construction of Bradford.

As owner Dan Benedict says: “We passed the garage with flying colors and landed the job to work on the house for the following summer. It was a huge leap for me to do a job like this from start to finish. I’d been working for other contractors for years since high school. But I knew it was going to go well, because we were working with Dave and Robert.” 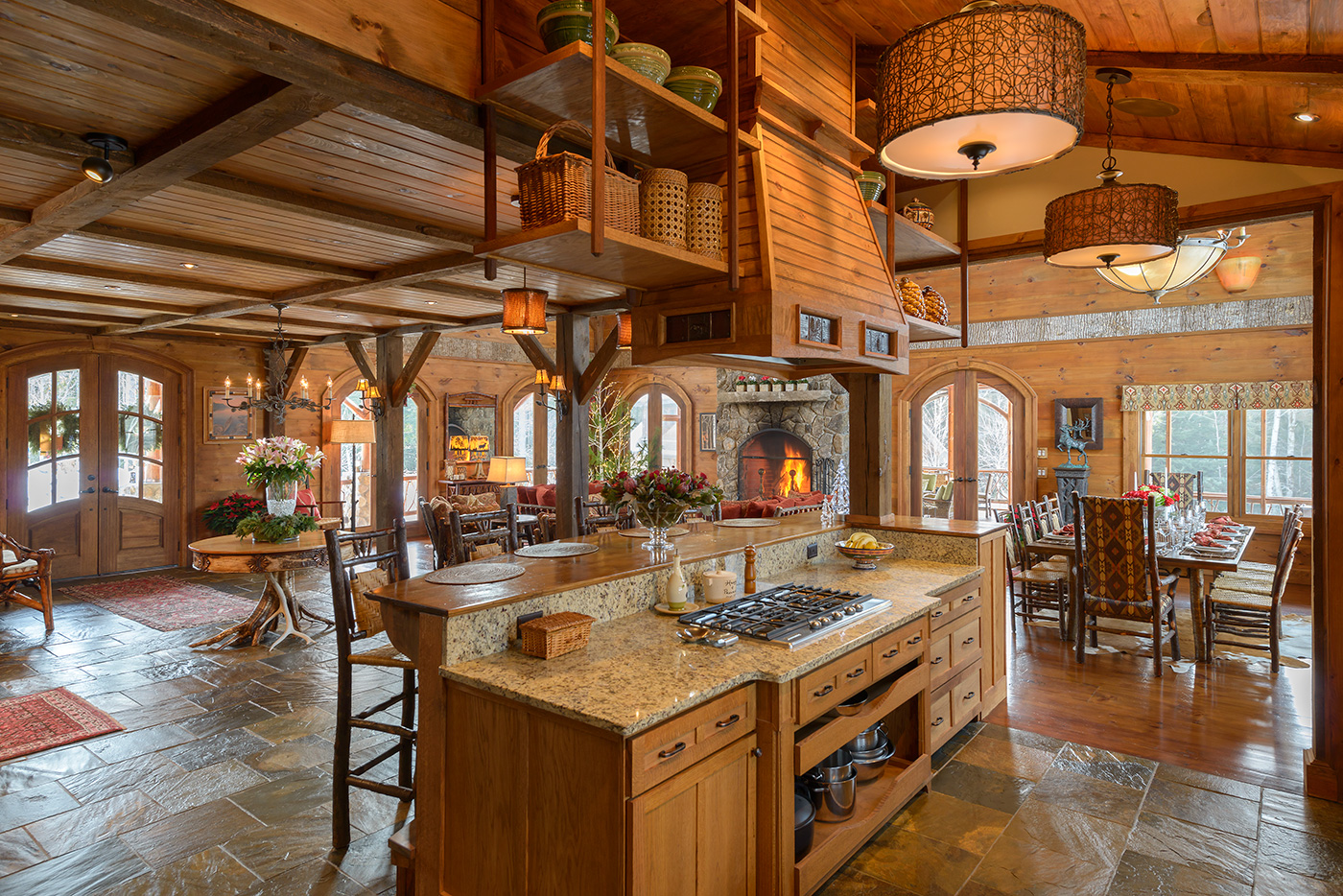 The dining room, to the right, is just steps away from both the living room and kitchen; the entry, to the left, allows busy hosts to note new arrivals while cooking and chatting with company. This open layout is spacious, welcoming and highly efficient.

The initial house plan was rough. To fully develop it, Benedict, Cleveland and Jensen collaborated—together with the full crew—formally and informally every day. The project lasted nine months with a two-week break after the framing. On workdays, Cleveland and Jensen fixed lunch, and every other week they fixed a breakfast as well. “There was always lots of coffee,” Benedict says, “and we’d have really good discussions about the work.”

Big decisions could happen in just a morning. “Dan convinced us to do the half-barrel roof for the entryway, because ‘it would be much more beautiful,’” Cleveland recalls. “Robert really wanted to do it. I thought it would be too expensive. Then they finished it, as promised, in less than two days.” That gentle arch became a theme throughout the house, manifesting in doorways, windows and fireplaces.

Joel Ansart, one of Benedict’s crew members and a friend of Benedict’s since elementary school, took on the kitchen. It was his first big kitchen project to fully manage. Jensen had him build a plywood mockup. “I’m visual,” Jensen says. “I’m the cook, and I really needed to see the layout before it became final.”

Then there was chandelier day. “We knew we wanted big chandeliers,” Cleveland says. “Robert found some online and made cardboard mockups of them.” As Benedict recalls: “They really wanted a ‘wow’ factor. Robert has the magic eye for decoration and placement. So we made a day of it and eventually got the chandelier placement just right.”

“Getting it right” was always critical whether it was a view from a window, a seat at the table or a chair on the porch. Keeping that a fun challenge is a testament to Cleveland and Jensen’s managerial abilities. 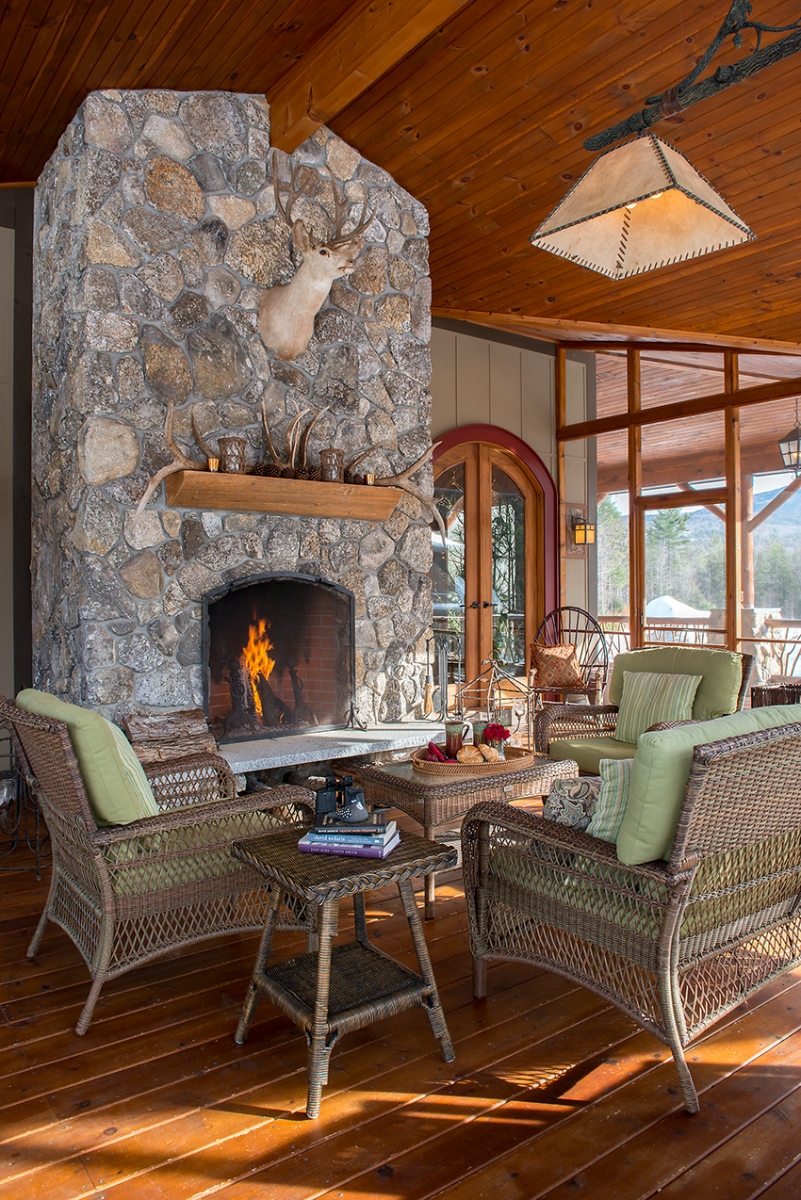 Providing a bit of heat, the fireplace extends entertaining on this screened-in porch
into early December.

To manufacture New Hampshire white pine floorboards, the team enlisted Christopher Mock, who operates a sawmill, circa 1925–1930, on his farm in Bradford. Mock learned about antique structures and horse logging from his grandfather; his father operated the sawmill. “I don’t send my lumber out to a kiln,” Mock says. “I put it on sticks and under cover. After it’s dry, the floor goes down in the wintertime. In the summer, it’s too humid. We stack the boards in the house with sticks and a fan going to let them acclimate. When the floor finally goes down, it won’t move a bit. It’s all a step-by-step progression. And, radiant-floor heat is fine with it.”

For four months, mason Josh Judkins, of Judkins Masonry, Engineering/Construction in Wilmot, built the chimney, using fieldstone from the property. Also a friend of Benedict’s, Judkins got his big break with this project, going out on his own after a long apprenticeship. “Josh had to go from bottom to top twice, laying the cinderblocks for a three-flue chimney and then doing the stone face,” Cleveland says. “When guests came, we’d all go down to the field and carry back a stone.”

Judkins works with stone the old-fashioned way; no saws were involved. “I just chisel them a little bit for the corner pieces,” Judkins says. “I look for a nice flat face and work with that.”

Since Cleveland and Jensen wanted a visual of the fireplaces in both the great room and on the porch from any vantage point, Judkins created raised hearths with wood boxes underneath. To incorporate the arch, Judkins made the keystones a bit heavier.

The fire screens were custom made to accommodate the arches. G.K. Stetson, of G.K. Stetson Blacksmiths in Newport, drew up designs to specs provided by Judkins. When Cleveland and Jensen reviewed his careful, detailed sketches, they did not hesitate to agree to his design. Stetson rivets the screening between two frames, which allows the screens to be repaired. “I just repaired a screen my dad made sixty years ago for a family on the lake,” Stetson says. “That was a delight. There’s something attractive about those rivets.”

It wasn’t all about the house. As that project unfolded, Cleveland and Jensen reinvented their careers. Cleveland is now a Realtor with Country Houses Real Estate. Jensen, with his friend Carmen Yurich, runs Jensen & Yurich Home, a home design store in New London.

Meanwhile, as planned, Cleveland and Jensen’s home is full of family and friends. All good.

But, says Cleveland, “Suddenly we are morning people.” He sounds almost aghast as would befit a former phantom, who sang “The Music of the Night,” a song that includes the lyric, “when night unfurls its splendor.”

“I love sunrises,” he adds.

And then Jensen chimes in with “morning is my favorite time of day.” 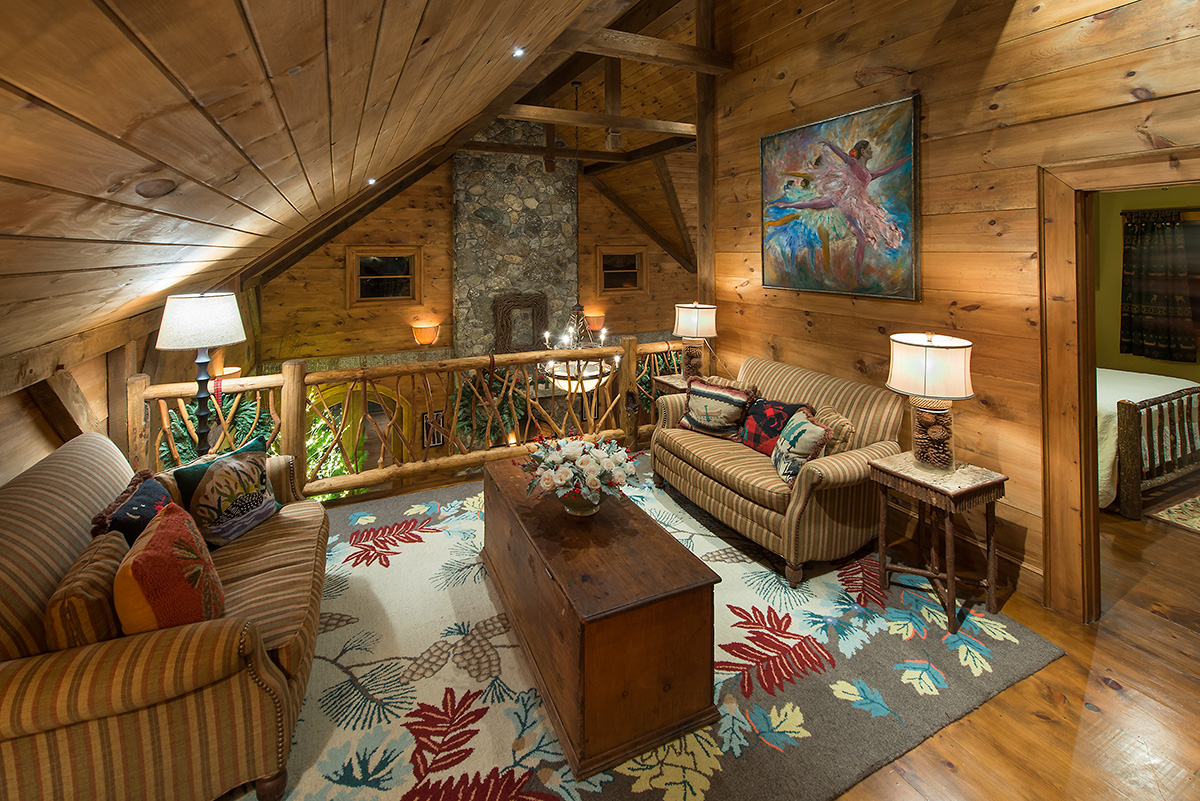 On the second floor, guests have their own sitting room with a balcony. Note the twig railing—it’s the signature work of builder Dan Benedict of Bradford. 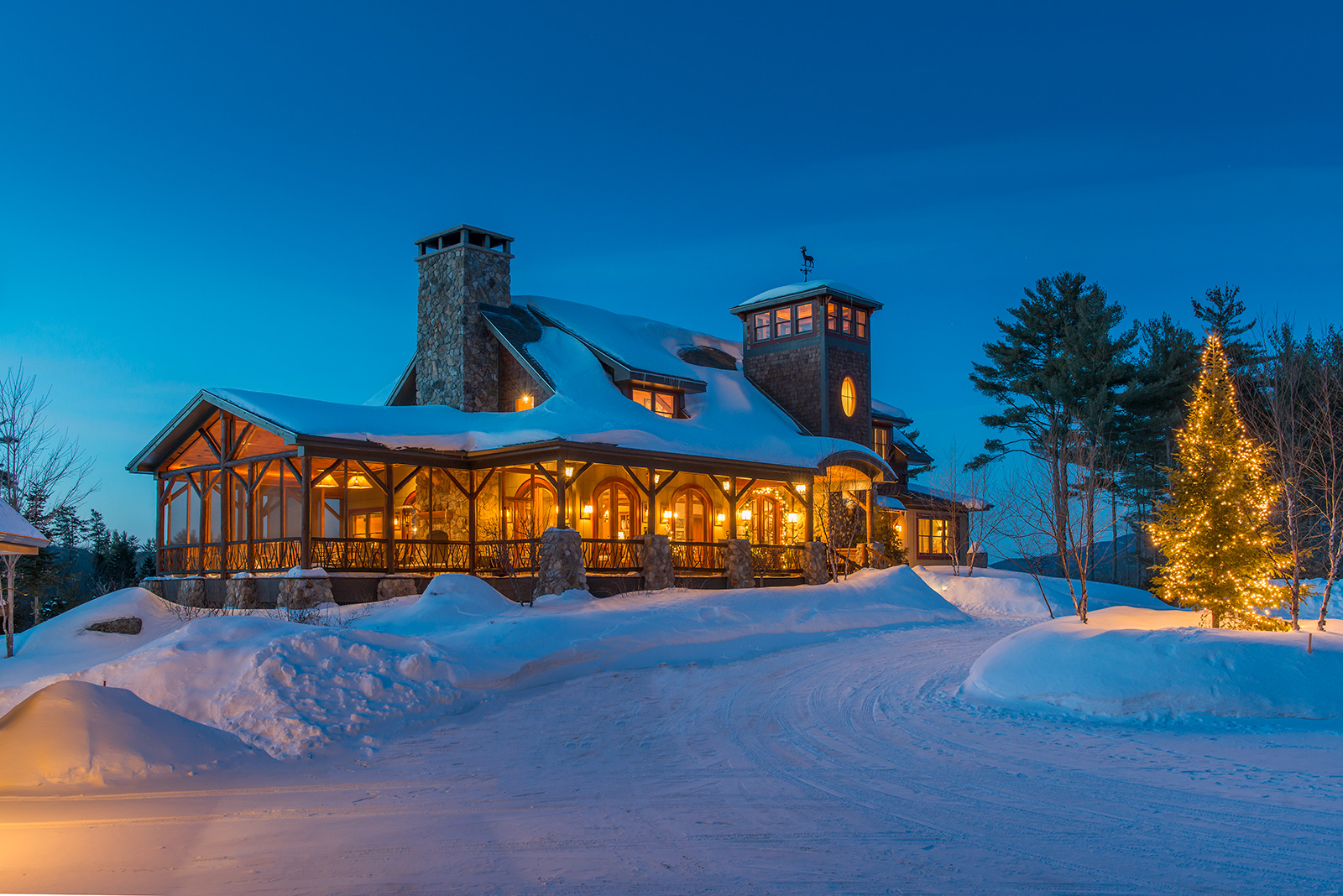 Twilight, white pines and holiday lights set the stage for this dramatic and welcoming home in Wilmot belonging to David Cleveland and Robert Jensen. 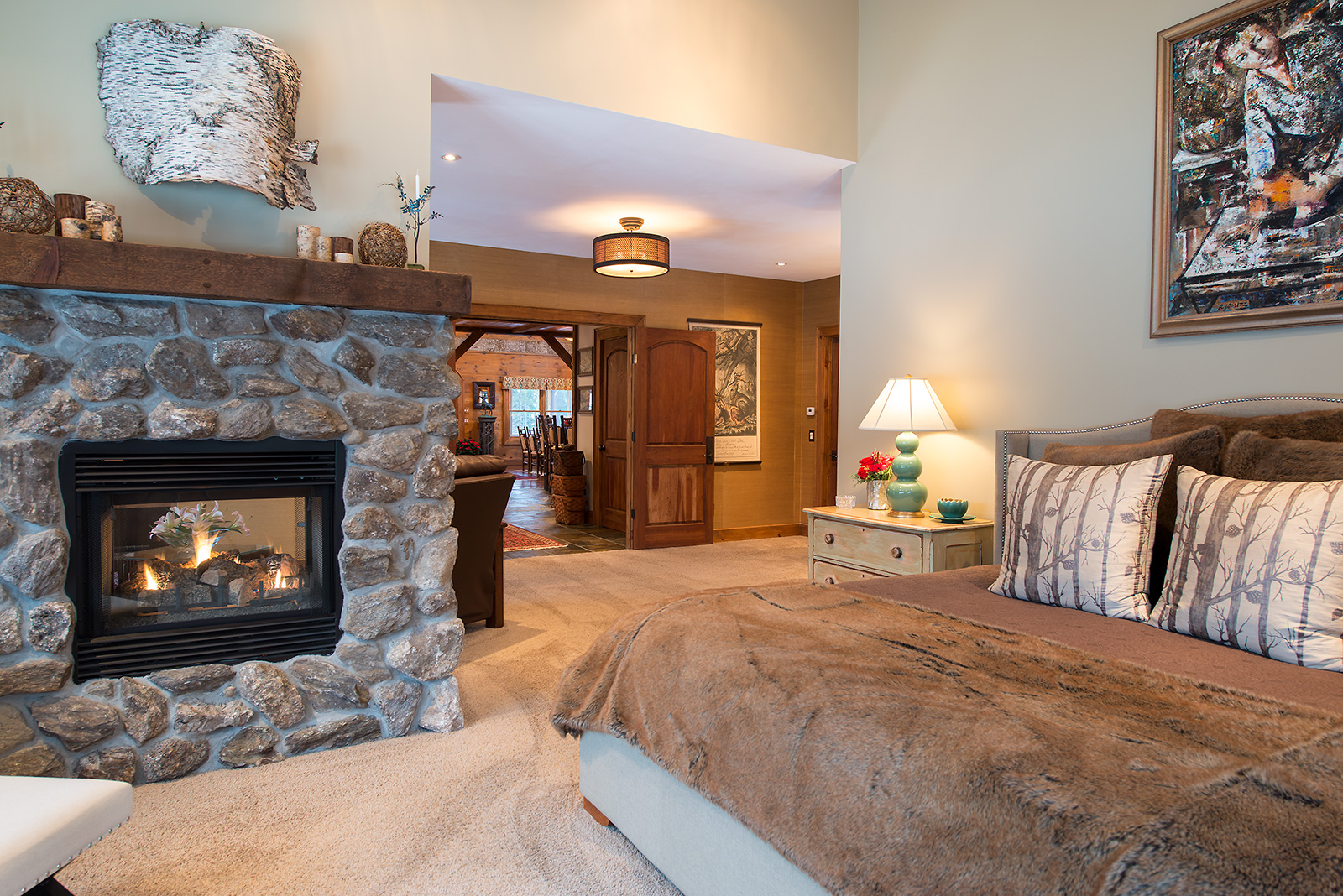 On the first floor and just off the kitchen, the master bedroom suite is cozy and accessible. Key to this décor is texture from the deep pile carpeting to the rough stone surround of the small gas fireplace. 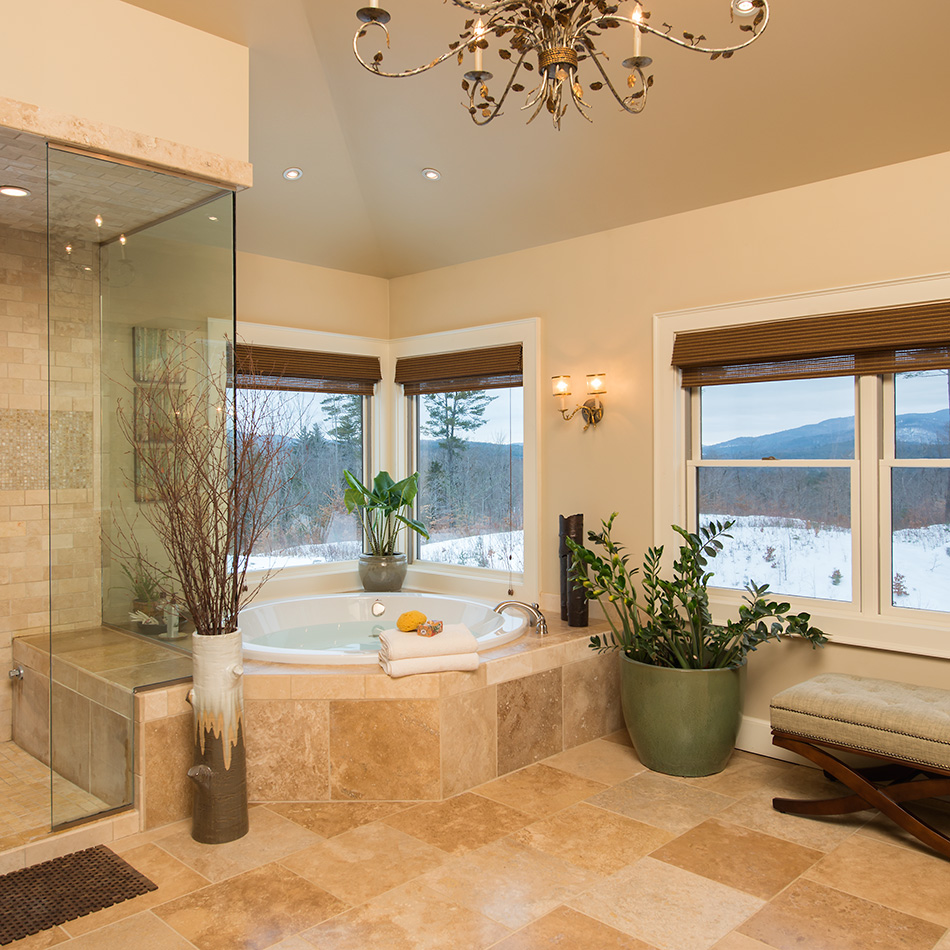 The rich variegated colors of travertine tile give this master bath an organic feel. Radiant-floor heat adds a warm touch, as do the magnificent mountain views.