A Milestone Birthday for a Portsmouth House 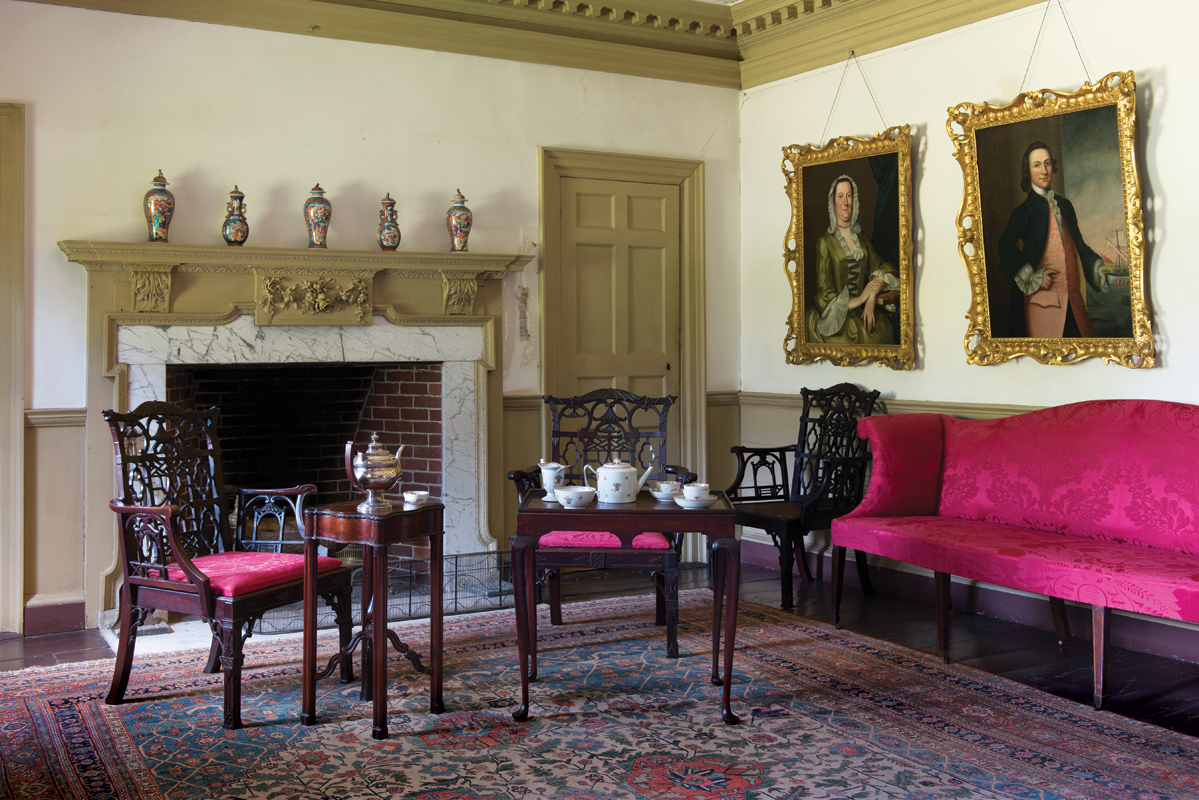 The antiques at the Moffatt-Ladd House include many furnishings descended from the Ladd family. This suite of furnishings in the parlor—three mahogany and cane armchairs, a tea table and a kettle stand—dates back to the 1760s.

George Washington never slept at the Moffatt-Ladd House, but he may have wished he had.

When it was first built for the family of wealthy merchant John Moffatt in 1763, the now-historic Georgian-style mansion was the tallest and grandest of its day, built for entertaining and situated on Front Street (now Market Street) in Portsmouth with a view of the family wharves on the Piscataqua River.

Owned and operated by the National Society of The Colonial Dames of America in the State of New Hampshire, this National Historic Landmark has been open to the public as the Moffatt-Ladd House & Garden museum since 1912. Last year, the organization celebrated the site’s 100th year as a museum, and this June, the group is planning special events and lectures to celebrate its 250th anniversary.

Moffatt-Ladd House & Garden Director/Curator Barbara McLean Ward says the mansion was the first three-story residence in Portsmouth. John Moffatt (1691–1786) was one of the wealthiest and successful merchants and landowners of his day. He built the house for his only son, Samuel Moffatt (1738–1780), and Samuel’s new wife, Sarah Catherine Tufton Mason Moffatt (1742–1802), with hopes of creating a “grand statement of the family’s wealth, position, and sophistication,” according to Ward’s history of the home’s families in the book The Moffatt-Ladd House, from Mansion to Museum.

John Moffatt spared no expense and hired the most talented Portsmouth craftsmen to build the house. The museum’s archives contain numerous inventories, invoices and letters that enrich the history of this grand home. “Not only is it architecturally rare and significant due to the ornamentation and unusual orientation of the floor plan, it is also incredibly well-documented,” Ward says.

Documentation includes statements of accounts from Michael Whidden III, who brought the home’s pre-cut frame “from ye warf” and raised it on a bluff facing the river. Whidden lists the names of the ten joiners who worked with him on the house, counting house, shop, barn and fences during the next three years. A statement from carver Ebenezer Dearing enumerates the woodwork he carved for the house: modillions, rosettes, stair brackets and other items.

“The home has served as a sort of ‘Rosetta Stone’ for determining the work of these craftsmen in other Piscataqua homes,” Ward says. “The home is not only significant in that it’s known as one of the finest Georgian mansions built in New England, but because of the very large entrance hall as well.” Most Georgian-style homes had a central hall or passageway at the entrance, with rooms on either side. The Moffatt-Ladd Mansion opens up to a grand hall that is one-fourth of the square-footage of the first floor.

“This house was meant to make a big impression,” Ward says.

A story of people

The National Society of The Colonial Dames of America
www.nscda.org

When visitors tour the Moffatt-Ladd House & Garden—the home and grounds are open for tours and events from early June to late October, and by appointment through mid-November—they often inquire about the people who lived in the home, Ward says.

One of the home’s renowned occupants was General William Whipple, a signer of the Declaration of Independence who served as a Portsmouth delegate to the new Revolutionary Assembly. Ward says the Whipples were among the most prominent people in the colony, meaning the home was a likely gathering place for the leaders of the American Revolution.

In the early 1770s, Whipple shared the mansion with his wife, Katharine Moffatt Whipple, and William’s enslaved manservant, Prince. William and Prince planted a horse chestnut tree with chestnuts William picked up in Philadelphia in 1776. The tree—named the “Millennium Landmark Tree” for the State of New Hampshire in 2000—has survived all forms of weather, is meticulously cared for and is listed on the National Register of Historic Trees.

After William died in 1785 at the age of fifty-four, Katharine was bequeathed the right to live in the mansion for a number of years, unfortunately at the expense of her sister-in-law and original owner, Sarah Catherine Tufton Mason Moffatt, who was forced to move from the mansion.

However, the house managed to stay in the Moffatt family. Samuel and Sarah’s second daughter, Polly, married Nathaniel Haven in 1786. Haven immediately acted on behalf of his wife and mother-in-law and questioned how John Moffatt’s estate was being handled. After a successful legal battle, Haven acquired the house in 1818 and conveyed it to his daughter, Maria Tufton Haven Ladd, the wife of the merchant Alexander Ladd, for one dollar.

During the next decades, the Ladds made some major changes to the home and grounds. Several outbuildings on the property were moved or added, including a warehouse built about 1780 and moved to the site in 1835 when it was converted to a coach house. (Today, under the stewardship of The Colonial Dames, the warehouse/coach house has been restored through the generosity of many donors, private foundations and New Hampshire’s Land and Community Heritage Investment Program. The building is now used for museum programs and events, and hosts annual New Hampshire Film Festival screenings. The public can rent the space as well.)

The Ladds also converted the front parlor to a dining room where they removed closets and added a sideboard niche. The Great Hall and staircase walls were papered in 1820 with grisaille wallpaper by Dufour, a popular manufacturer of scenic wallpaper based in France. The scene is of the Bay of Naples in Italy. Colorful and durable floor cloth was installed in the house and fragments of it still survive. Ward credits two inventories conducted in 1849 and again at the time of Alexander Ladd’s death in 1855 with providing much detail about the home’s furnishings.

Three bedchambers—the White, Green and Yellow Chambers—and a Long Chamber likely used for business make up the second floor. Servants’ quarters, two additional bedrooms and a nursery were located on the third floor. The basement featured a summer kitchen with a dairy area for butter and cheese making, and a wine cellar.

Alexander Hamilton (A. H.) Ladd assumed ownership of the house in 1861 after his mother’s death. As a young man, he partnered with his father and brother, Charles Haven Ladd, to establish Portsmouth’s only whale oil refinery. After 1855, A. H. Ladd became a cotton broker, dividing his time between Portsmouth and Galveston, Texas.

Through the years, A. H. Ladd modernized the home’s mechanical systems. He constructed an extensive drainage system under the house to deal with basement flooding, updated the stoves and added a combination tin-lined refrigerator/dumbwaiter that went from the basement kitchen to the first-floor kitchen.

A. H. Ladd is credited with laying out the garden in its present form in the late-nineteenth century.

“He was the ultimate gardener,” says Moffatt-Ladd House & Garden Committee Chairwoman Liz Hoefler. She credits Ladd with laying the groundwork: sifting the soil and adding “massive” amounts of fertilizer to support numerous species of fruit trees, plants and flowers as well as an assortment of medicinal herbs.

Ladd enjoyed planting bulbs (tulips, irises, etc.) so much that one winter, he wrote of losing more than sixty thousand tulip bulbs. After Ladd died in 1900, the gardens became overgrown. When his heirs offered the house to the National Society of The Colonial Dames in New Hampshire, the organization’s volunteers restored the gardens and work on it to this day. Hoefler has worked on the garden for the last fifteen years.

She says volunteers usually start working on the grounds the first week of April and tend to the gardens through Thanksgiving. The garden changes over the season.

“One of the intriguing things about the garden is that a visitor can come in June, then return several weeks later, and the garden will be completely different as various flowers bloom,” she says.

“People are just stunned. We do try to have a variety of plants bloom over the season,” she says, adding there isn’t just one color scheme. “We try to avoid formality with the garden.”

Nearby the stunning and massive horse chestnut tree planted by General Whipple in 1776, an even older plant exists: an English damask rose planted in 1768 by Sarah Catherine Tufton Mason Moffatt. Standing strong to this day and nearly 250 years old, these plants symbolize the strength and endurance of this house and garden—and all who care for them.