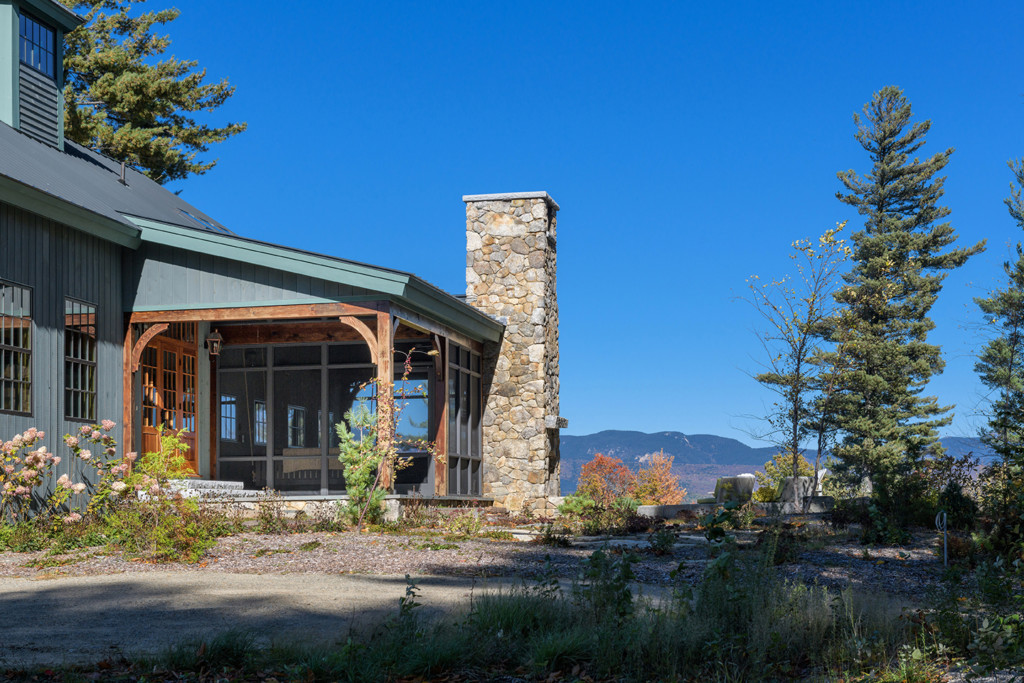 Perched on the highest point in Carroll County, the home offers a panoramic view of the mountain range that homeowner Jeff Cole fondly remembers from visits to New Hampshire as a child. The 118 acres of forested land that surround the home provide a place for outdoor recreation. A double-sided stone fireplace offers warmth when the days grow cold.
(Photo by John W. Hession)

“We wanted to be up on that mountain,” says Mary Bess Jarrard. “We just loved the land.” It was the perfect spot for their vacation home.

Both she and her husband, Jeff Cole, knew it would be daunting to build on the top of a mountain, but they were determined to do it.

Cole wanted the view they would have once the mountaintop—the highest point in Carroll County—was cleared. “The view of Mount Chocorua and the Sandwich Range was the view of my childhood,” he says. Growing up, he had spent summers in the area and had many fond memories.

Jarrard’s ties to the state were more recent. “A born and bred Georgia peach,” as her husband calls her, Jarrard learned to love New Hampshire during visits here after they had married and settled in Georgia. She came to love the Granite State enough that one day in 2000, she said, in a pleasant surprise for Cole, that they should buy land in New Hampshire.

And so they did—118 acres of heavily forested mountain. With all the challenges such rugged terrain presents, they’d need an expert team for the project, which started as a barn and evolved into a barn home. They enlisted
Bonin Architects & Associates, PLLC of New London and Meredith, with Jeremy Bonin as architect and Chris Timberlake as project manager, as well as Michael Broome, of Broome Building Co. in Alexandria, as the builder.

The evolution of the building

A driveway—almost a half-mile long—was carved out of the forest. Cole says the remoteness of the construction site encouraged self-sufficiency: “It’s so far away, bringing in electricity would have been very expensive.” For the same cost, the couple found they could install a solar array to generate electricity and build the house to be net-zero.

Once the decision to be off the grid was made, “efficiency in construction, thermal envelope and a multitude of other choices was guided by that decision, giving the project an overarching guideline and goal,” Bonin says. Bonin and Broome’s efforts were recognized at the New Hampshire Home Design Awards in January, when this project won for Excellence in Green Design. 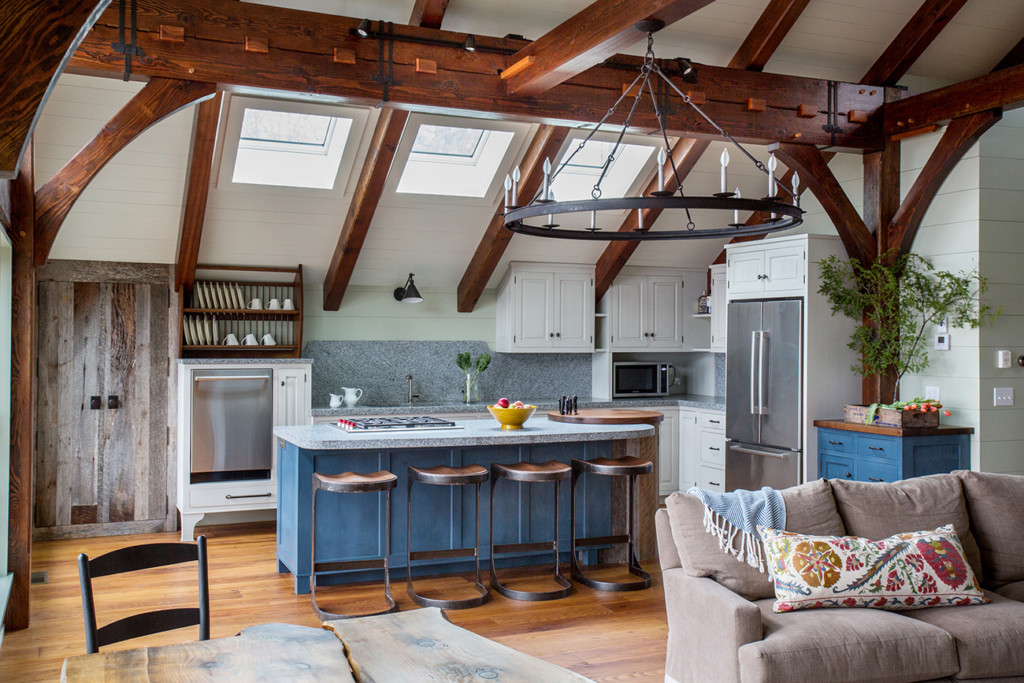 Timber frame construction can present challenges for kitchen design. To create balance, and avoid head bumps, kitchen designer Sue Booth, of Vintage Kitchens in Concord, located the sink between two ceiling rafters. To match the heft of the timber, the granite countertops were made two inches thick.
(Photo by by Rinne Allen)

The design itself, Bonin says, reflects “the New England barn aesthetic,” starting with an exterior comprised of a traditional shiplap vertical board that can be found on many New England barns. Also like many barns, he adds, “the project changed and was added onto during the design process.”

At first, Jarrard and Cole had planned to build the barn-like structure to store recreational gear and Cole’s woodworking tools. “Then we added a bedroom to the plan,” Jarrard says. “Then a kitchen. Then the whole project became one great house.” The overall goal would be “a simple New England look” but “with some Southern charm.”

Cole knew, whatever the look was to be, he wanted it to be timber frame construction. Woodworking is one of his passions, and, for him, the massive timbers and joinery offer an appealing aesthetic.

Broome shares this opinion: “Exposed timbers remind us of their purpose, nothing is hidden. Sunlight and shadows play along the timber work, exposing the beauty of the wood grain.” The timbers are fir with cherry splines, finished in a special walnut and Danish oil.

As beautiful as timber frame construction is, it makes interior design challenging. “This type of construction presents challenges that range from the utilization of the space under the descending rafters to lighting design and wiring to finding storage areas,” says Lisa Ellis, the Georgia-based interior designer Jarrard and Cole worked with.

Since the ground floor of the home is used for a workshop and vehicle storage, with the living space tucked between trusses on the upper floor, Ellis says she had to claim “every single inch” between the posts, beams, struts and purlins for storage and living, “keeping in mind the need to avoid head bumps on the descending roofline.”

Case in point—the kitchen. Designed in collaboration with Sue Booth, of Vintage Kitchens in Concord, avoiding head bumps was a key consideration in the placement of the sink. “The sink,” Booth says, “was installed between two ceiling rafters, so it’s comfortable while standing there, but also it makes sense to have it balanced.”

Although there isn’t any cabinetry above the sink, there’s plenty of storage in the cabinets elsewhere, all finished in milk paint with a brush technique that creates striation. There’s also the handcrafted walnut plate rack and an adjacent pantry set behind doors made of reclaimed barn wood.

Reclaimed wood is also used for the unusual circular chopping block cabinet at the end of the island. This piece replicates a cabinet in the kitchen of Cole and Jarrard’s Georgia home that was designed by British designer Johnny Grey, as does the dishwasher that’s elevated to eye level; as one of the most renowned kitchen designers in the world, Grey’s “unfitted kitchens” depart from traditional configurations.

Booth says Grey’s approach, first formulated in the 1980s, blends the details found in actual furniture with the functional needs for storage in a kitchen. “Cabinetry under his creative insight was no longer all matching, but more handcrafted, mixed woods and interesting painted finishes,” Booth explains. “In essence, Grey’s style brought back very early and longstanding tenets of kitchen furniture—a cooking spot, a work table, and a scullery space or wash-up area.” His vision was the beginning of cabinets-like-furniture idea that is now so ubiquitous.

Grey’s vision has inspired Booth since early in her career, and she loved that the homeowners incorporated elements of his non-standard design. “The rough wood in the kitchen complements the location, and the clean, simple lines and muted colors complement the architecture,” Booth says. “It’s not too country, not too modern. It’s sort of this wonderful intersection between the two.”

Because of the substantial massing of timber in the house, Booth says the countertop “needed some heft.” It’s two-inch-thick Stanstead Grey granite that’s harvested in Québec. “In this space,” Booth says, “it feels perfect.” Perfect, but heavy. Cole says getting the granite to the site was a formidable task: “One piece weighed more than 1,100 pounds. It took a lot of men, and they don’t ever want to do that again.” 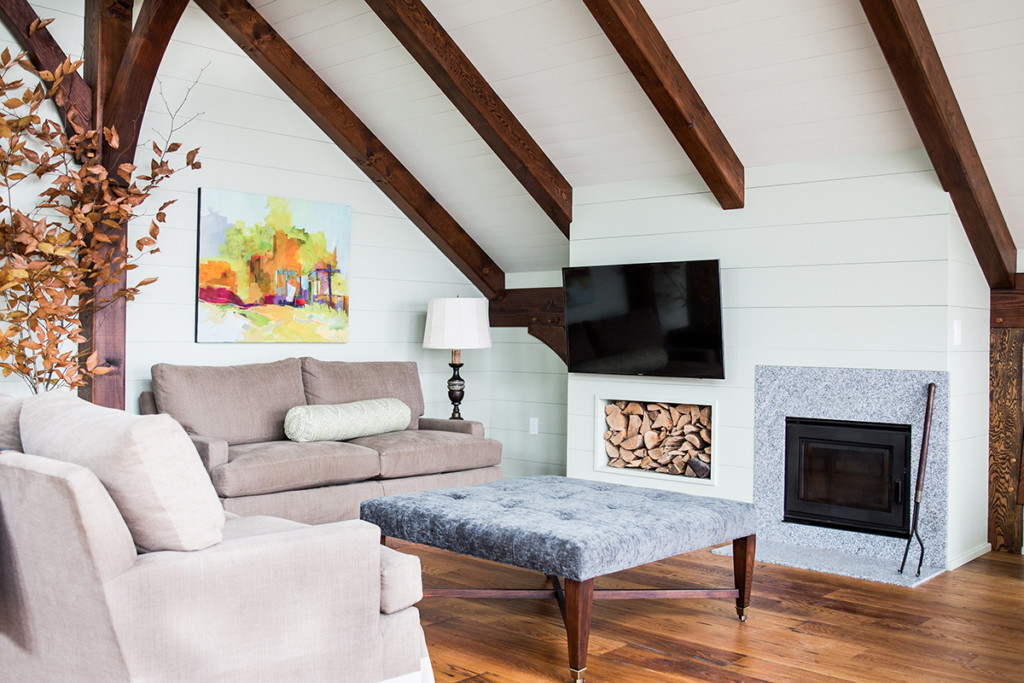 The open-concept living room offers a cozy spot to gather; it also provides stunning views through a bank of windows in the adjacent dining room.
(Photo by Rinne Allen)

Nearby the kitchen—stretching alongside a bank of windows that opens the room to the vista beyond—is a trestle table hand-built by Cole. Offering seating at the table are Tappan chairs, handcrafted in neighboring Center Sandwich by Adam Nudd-Homeyer, a seventh-generation chair maker. The pattern for the chairs, black-painted maple wood with checkerboard mesh, is two hundred years old. The trestle table is one of two that Cole built; the other is in the loft area at the other end of the main floor.

To create a linear flow in the corridor that connects the two ends of the main floor, both with expansive views, Ellis encased all the interior walls in shiplap painted a light-green-tinted white. “I wanted one’s attention completely on these large windows and the view,” Ellis says. To further ensure there was no distraction, she made some of the corridor’s doors frameless with hidden hinges and ran the shiplap across them. In addition, the wall that separates the loft from the rest of the main floor is a window wall made of steel and glass with doors.

Off the corridor is the master bedroom, an especially challenging room to design. There, too, Ellis didn’t want details to distract from the view through the room’s large window. Yet a closet, vanity area, television and chest of drawer storage had to be accommodated, “all to be contained under the descending roofline,” Ellis says.

The solution: built-ins under the roofline on one side with a closet and a television on an arm in the low corner on the other.

Perhaps the most dazzling aspect of the timber frame structure is the cupola, a long-held woodworking dream of Cole’s. Reached by a handcrafted ship’s ladder set in the corridor, the cupola is structured with a reciprocal frame that, as architect Bonin explains, “relies on mutually supporting beams that, when complete, support themselves without posts or other structural members. A tepee is a primary example, with some European cathedrals taking the complexity to beautiful
extremes.”

Broome gives kudos to the design: “The cupola was a unique and brilliant thought while structurally engineering the home. Ideas like this are a complex and challenging solution.”

The light fixture in the cupola was designed by Ellis and created by her lighting company, Hawthorne House, specifically for the space. “I had the fixture welded in iron for the more artisanal aesthetic, but the form and shape are very modern. I mimicked the geometry of the cupola.” The fixture is one of three she designed for the home.

Living with the elements

Outside are a screened porch and a patio that are separated by a double-sided fireplace with a massive chimney. Built by stonemason Chris Springer, of Iron Hammer Stoneworks in Danbury, with stones found on the property, the chimney offers warmth in the chill mountain air.

At the 1,204-foot elevation, that chill air can turn into strong winds that whip across the vast open expanse of land. Jarrard and Cole recount the time their daughter and some friends were at the home during a nor’easter. Despite 75 mph winds, the structure held tight. The home is built to withstand a hurricane.

Thanks to a team that liked to tackle challenges, Jarrard and Cole now have the mountaintop home they wanted. They’ve even enjoyed some family Christmases there, kept warm in their off-grid home by just a woodstove and radiant-floor heating. “It’s warmer than our house in Georgia, no doubt,” Jarrard says.

Whatever the time of year, the “happiest spot” at their new home is sitting on the patio surrounded by the stunning views of Mount Chocorua and the Sandwich Range. “I kind of have to pinch myself,” Cole says. “I can’t believe it’s real.” 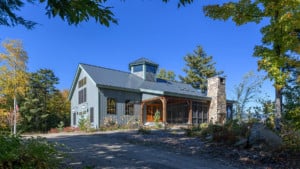 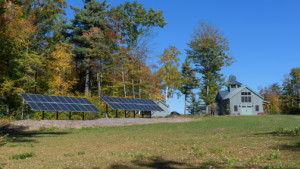 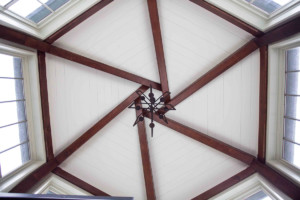 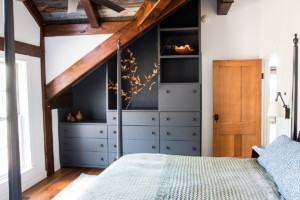 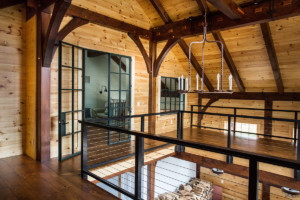 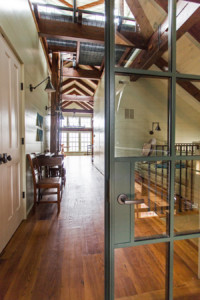 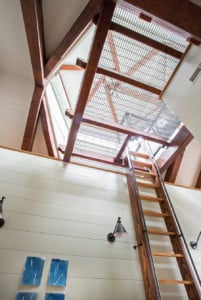 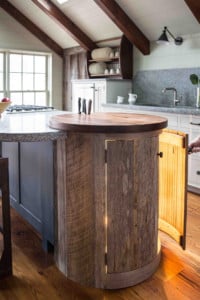 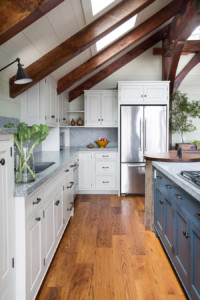 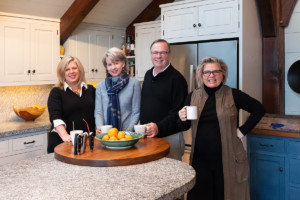