A Nelson, NH Garden is Truly an Edible Landscape

A talented designer created a beautiful garden reminiscent of those in England and Italy, where the freshest produce is only footsteps away.

How far has the food on your plate traveled? At one garden in Nelson, the answer is “from just outside the door.” These homeowners have turned their property into a veritable garden of good eatin’, surrounding their house with edibles from vegetables and fruits to herbs and nuts.

Starting in the spring with fresh sorrel as well as overwintered carrots and parsnips; through summer’s bounty of tomatoes, peppers and eggplants; and into a fall harvest of frost-hardy kale and Brussels sprouts, this garden is kept productive by constant replanting. When one crop is harvested, another is waiting to be popped into its place. No bare ground is open for long. Garden designer Jenny Lee Hughes of Stoddard and her crew see to that. “We practice succession planting to keep new things going in from spring to fall,” Hughes says.

Lest you think this garden must be strictly dull and utilitarian, it is quite the opposite. Hughes has designed an attractive series of garden rooms, ringing the house where flowers—many of them edible—and flowering and fruiting shrubs are interplanted with traditional fruits and vegetables to create a beautiful, edible landscape. Elegantly composed, the area nearest the house is a bit more formal with neat, raised beds edged with granite cobblestones. An exuberant vegetable garden is off the kitchen with beds of broccoli, kale, red cabbage and eggplant alongside rutabagas, leeks, carrots, red onions and more.

“The design is very much Jenny’s,” the homeowner says. “I told her that I wanted it to be reminiscent of some of the English country gardens I grew up with along with a dash of the gardens I’ve seen on trips to Italy. I think she has caught the spirit I had in mind very well.”

“The design for this garden came out of getting to know the owner and what was important to her, and through looking at the existing conditions of the landscape and noticing the finest assets that might be taken better advantage of,” Hughes says.

New-growth pine was cleared to expose an old stone wall that is lined with large shade trees, and to give a wider view of Mount Monadnock and the surrounding hills. Then Hughes added the bold lines that became the structure of the garden design: the beds surrounding the house are composed primarily of right angles and straight lines with a large semicircular bed at the south side of the house facing Mount Monadnock. “This serves as a comfortable but formal setting for the plants,” Hughes says.

Almost all the beds contain both ornamental and edible plants. Using the same design principles she would employ in planting a strictly ornamental garden, Hughes says, “Many vegetables are beautiful in their own right and can easily fit in with a mixed border.” Some of the vegetables she finds to have special ornamental value are artichokes, cardoon, lettuce, Swiss chard, Asian greens and all the brassicas.

“Beets and their greens are also very beautiful, and Swiss chard, kale and eggplant look good as minor accents in a bed of perennials, flowers and trees.” she says. “Curly parsley mixed with zinnias, marigolds or calendulas are not only beneficial in the vegetable garden but are great plants to transition into your ornamental beds.”

The gardens are also home to an abundance of herbs. Basil, chives, oregano, thyme, tarragon, sage and mint are readily at hand for the homeowner to use in her kitchen. “Herbs are key!” she says, “I drink lots of mint tea, and use all the parsley and basil we can grow. I also use a ton of sage and oregano.”

A variety of colors and textures keep things interesting. “Many herbs and ornamental plants are great for attracting beneficial insects, such as native pollinators, hover flies, small wasps and ladybugs,” Hughes says. She always tries to have yarrows, dill, lavender, fennel, angelica, Queen Ann’s lace, veronicas and astrantia growing around the gardens to attract these garden helpers. “Lobelia, alyssum and alliums look nice as fillers and make good edging plants as well along with parsley, beets, bush beans and chard,” she says.

Open space is not lacking. There is a five-acre field of wildflowers on the south side of the house that is mowed once a year. Last fall, some sheep were brought to graze there. As the garden expands, Hughes is developing wilder meadow and woodland areas outside of the primary perimeter beds. The property consists of forty acres, of which about eighteen acres are fenced to give the gardens protection from marauding deer and other wildlife.

Although they eat seasonally from the garden, the homeowner and her son are not strict vegetarians. “We eat very little meat or dairy, but we are not fanatical about it,” she says. “The biggest change in our diet has been the ability to eat very, very fresh food! I love being able to pick vegetables and have them on the table in twenty minutes. They taste fantastic!”

Even though she is a busy professional, the homeowner still finds time to put up any extra produce for future use. “My favorite method of preservation is freezing,” she says. “I try to do a little every weekend in season and find that it adds up.” She dries Jacob’s cattle beans for storage and also has a dehydrator for apple slices and mint.

In the winter, the homeowners are able to grow some kale and turnips in their unheated, eight-by-twelve-foot, solar-powered greenhouse. Hughes uses this greenhouse to start many of the vegetable transplants needed to keep the garden producing throughout the season; others are purchased locally.

It is hard to believe this landscape is only a few years old. There were lots of low-bush blueberries and a few old apple trees on the property when the homeowners moved in, but other fruits—such as peaches, apricots, plums and cherries along with high-bush blueberries—have been added. Nut trees (planted only a few years ago) are not bearing yet, but Hughes hopes someday the homeowners will be able to harvest English and Chinese walnuts, butternuts and northern pecans.

“Any garden is a gift, but Jenny has done an amazing job here,” the homeowner says. “I feel fortunate to have time in such a peaceful and beautiful place.” 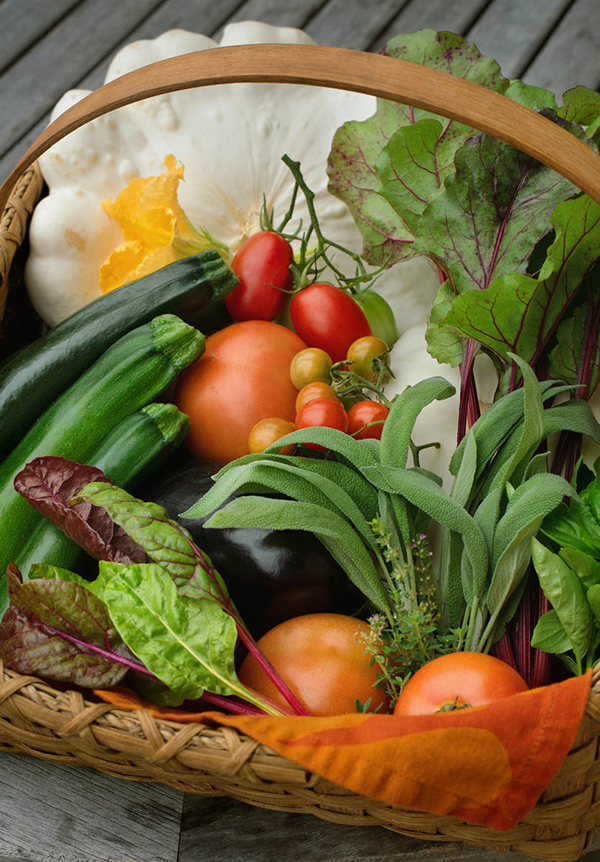 Here are a few tips to make your landscaping more edible.

• Start small by adding herbs. Basil, sage, thyme and oregano are easy to grow and benefit from frequent harvesting.

• Think you don’t have enough sun to grow vegetables? Many greens and other vegetables—such as arugula, chard, kale, lettuce, parsley, peas and rhubarb—do just fine in a semi-shaded location.

• Instead of ornamental grass, try growing blocks of corn. Also in the grass family, corn has elegant arching leaves and attractive tassels.

• Because most vegetables are annual plants, you are not locked in to the design. Replanting gives you the opportunity to change the look of the garden over the season.

• Integrate vegetables, fruits and herbs with the ornamentals you already have, or consider losing some of your lawn and growing a diverse mix of ornamentals and edibles.

• When planning next year’s garden, look for vegetables that have interesting forms, textures and colors to make your edible landscape also a feast for the eyes.