A New Library with a New Purpose

Famed architect Robert A. M. Stern designed Ohrstrom Library at St. Paul’s School in Concord to be more than just a place to read. 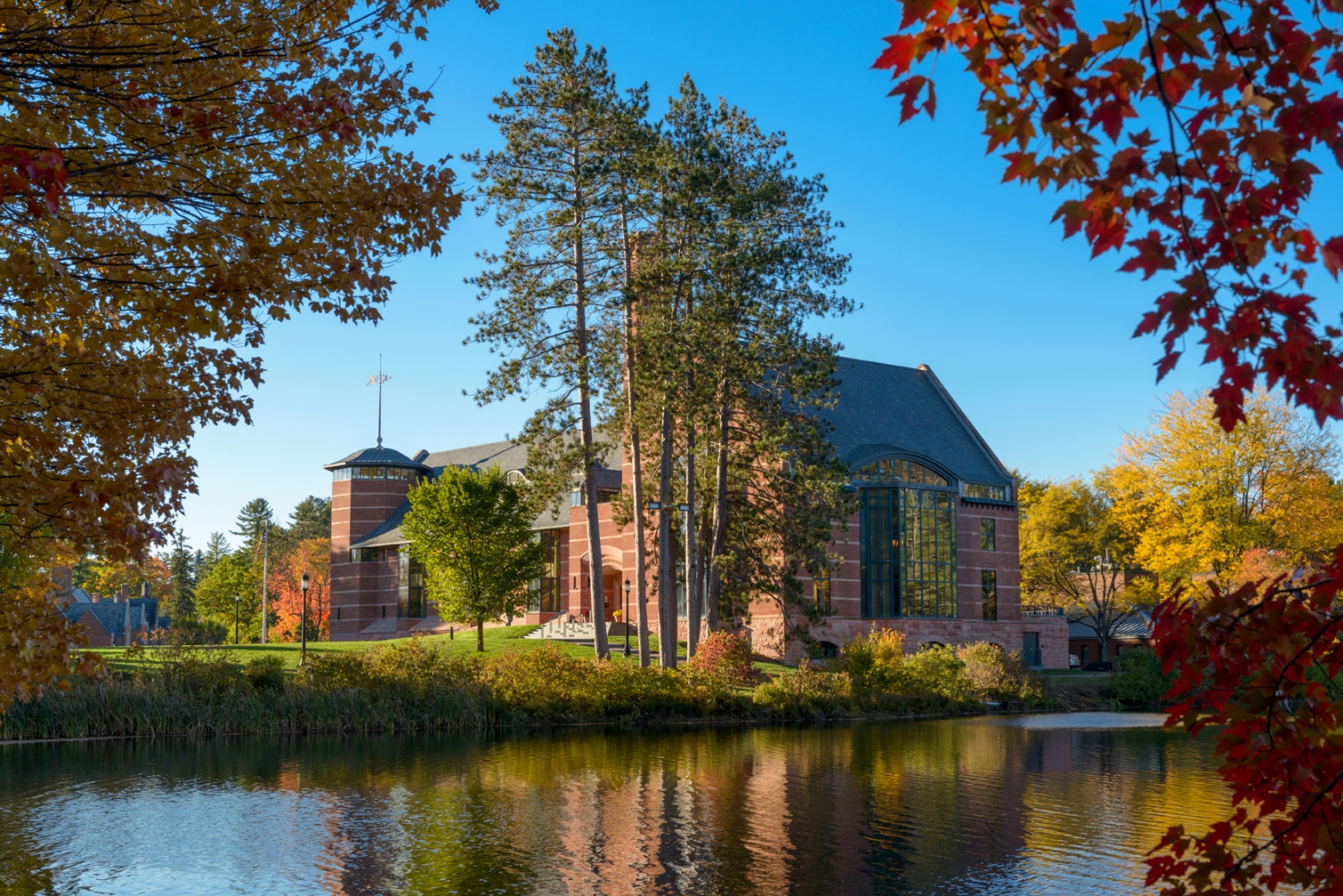 Built near the shore of the Lower School Pond at St. Paul’s School, the 32,000-square-foot Ohrstrom Library can accommodate 250 students and contains more than 75,000 print volumes in open stacks. Designed by architect Robert A. M. Stern, the building was awarded a citation for distinguished architecture from the American Institute of Architects New York chapter in 1992.

There are times when renovating or adding on to a building isn’t the best solution, and that is the long story short of the original library at St. Paul’s School in Concord.

Built in 1901 in the popular Beaux-Arts style, the classically beautiful Sheldon Library was overflowing with books and students eighty years later. Its climate control system was antiquated, and it wasn’t wired for the digital age.

The school ultimately chose Robert A. M. Stern of Robert A. M. Stern Architects in New York City to design a new library. The acclaimed architect, teacher and writer founded his practice in 1977, and became dean of the Yale School of Architecture in 1988 (he retired last spring). Known for blending modern with traditional elements in his designs, Stern’s noteworthy buildings include the Norman Rockwell Museum in Stockbridge, Massachusetts; the George W. Bush Presidential Center in Dallas, Texas; the Comcast Center in Philadelphia; 15 Central Park West in New York City; along with numerous residential, commercial and institutional buildings for an array of clients around the world.

St. Paul’s School trustees felt Stern had “an understanding for the school’s natural and built environment that was unique among practicing architects of the first rank,” alumnus and trustee Edmund P. Pillsbury said in his remarks at the inauguration of the new library in April 1991. Pillsbury added that Stern had an emotional connection to the school because his son Nicholas had attended and graduated in 1986.

Although Stern’s first thought was to renovate and add on to Sheldon while preserving the original structure, the trustees wanted a new building that could accommodate students’ growing needs for resources, services and space in the future. Among those trustees was George Lewis Ohrstrom Jr., a 1945 graduate of St. Paul’s for whom the new library is named.

The best site for the Ohrstrom Library, Stern determined, was next to the smaller old chapel and the larger Chapel of St. Peter and St. Paul, an exquisite Gothic-inspired building designed by Boston architect Henry Vaughan in 1888; Vaughan also designed the National Cathedral in Washington, D.C.

“We set out to create a quadrangle of space that would bring together the small chapel, the great chapel of St. Peter and St. Paul, and the library visually, spatially and functionally as they had never been before,” Stern said in his 1992 essay in the school’s alumni publication, Alumni Horae.

The location of the new library near the two chapels was key. “The site for the Ohrstrom Library consolidated the intellectual and spiritual centers of the school,” says Rector Michael Hirschfeld, an alumnus and former teacher at the school.

Stern viewed the design of Ohrstrom “as an opportunity to reaffirm that a modern building need not, indeed must not, be a repudiation of the past.” Like its two neighbors, the Ohrstrom Library’s exterior would also be red brick and stone.

Among Stern’s sources of inspiration for the Ohrstrom Library was the Crane Library in Quincy, Massachusetts, which was designed by H. H. Richardson in 1880. “More than a book repository,” Stern wrote, “Richardson saw [Crane Library] as a community center and developed a plan that included important public gathering spaces separated from the book room.”

For the design of the Ohrstrom Library’s interior, Stern said he “turned Richardson’s [plan for the Crane Library] inside out.” Instead of putting book-lined alcoves along the edges of the building, Stern put the book stacks in the center of the library, where they’re protected from sunlight, and placed glassed-in alcoves along the sides. Here students can sit comfortably in carrels, lounge chairs or at desks; natural daylight provides illumination for reading while views of both chapels and the school’s exquisite natural setting offer the perfect distraction when needed.

The Architecture of St. Paul’s School and the Design of Ohrstrom Library by Robert A. M. Stern. Alumni Horae, Spring and Autumn 1992.

Upon entering the 32,000 square-foot Ohrstrom Library, one is struck by the feeling of light, space and modernity. On the left are stacks and offices; on the right are the reading rooms. The primary reading room is a two-story vaulted space that opens to a view of the Lower School Pond. The spectacular tall oriel windows, with their juxtaposition of metal and glass, are Stern’s nods to Charles Rennie Mackintosh’s 1907 design for the Glasgow School of Art.

Stern believed that to succeed as a library, “Ohrstrom must transcend simple utility to become a living room for the school.” Rector Hirschfeld says the new library has “become a center at the school, a meeting spot with comfortable furniture. We encourage students to work together and collaborate, to prepare for the twenty-first-century world. That’s why ‘Quiet!’ is less of a no-no in the Ohrstrom Library.”

Architect Robert A. M. Stern worked with lighting designer Carroll Cline on the hanging pendants and table lamps. Views of the pond can be enjoyed from the second floor gallery that wraps around the reading room.

The entrance to the handsome red-brick and stone library (center) is flanked by bay windows and a chimney reaching high into the sky. 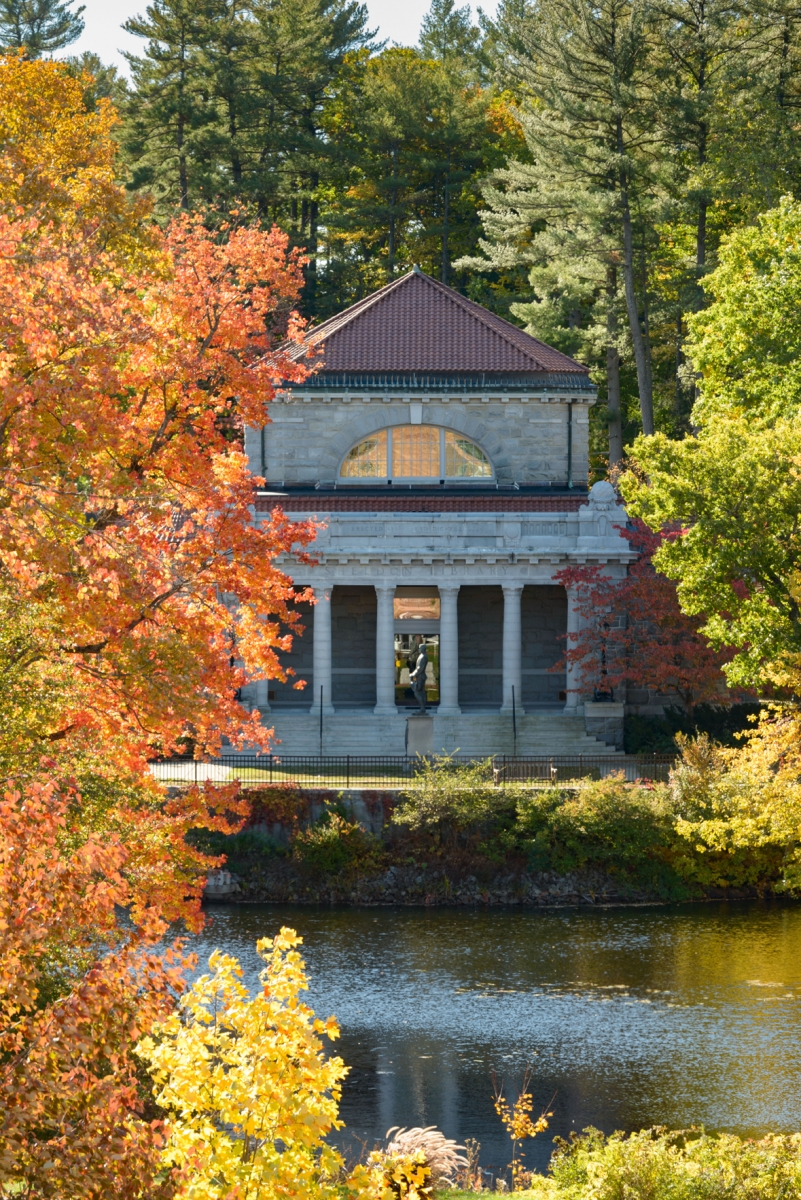 The Beaux Arts-style Sheldon Library was built in 1901 and now houses offices.