A New Museum Exhibition Sheds Light on an Old Sect 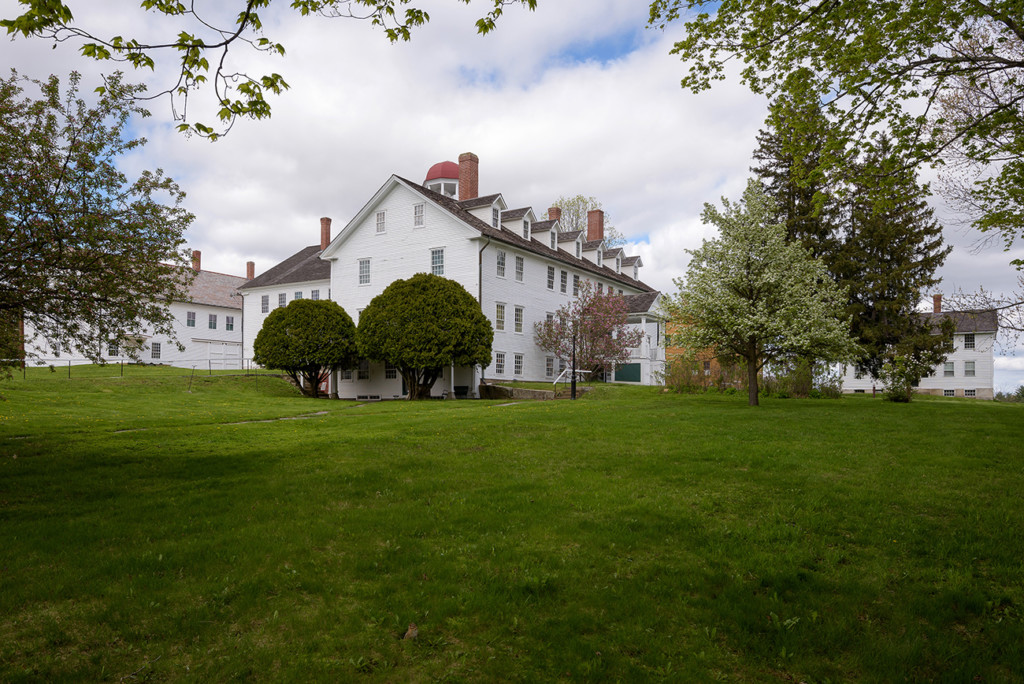 Esteemed for its architectural integrity and significance, the Dwelling House at Canterbury Shaker Village is one of New Hampshire’s most important historic buildings. It preserves the two-hundred-year-old legacy of the Canterbury Shakers and best reveals their approach to design: a style and practice that was never archaic or fixed, but rather organic, extremely skillful and responsive to the pace of their communal life. Photography by Morgan Karanasios.

Whether you know a lot or a little about the Shakers, the upcoming show The Shakers and the Modern World at The Currier Museum of Art in Manchester is both “informative and evocative,” says Andrew Spahr, the Currier’s director of collections and exhibitions.

The Shakers—a Christian sect whose tenets included pacifism, celibacy, communal property, and the equality of men and women—established a number of communities in the United States in the late 1700s, one of which was Canterbury Shaker Village in Canterbury. The show—which launches October 12 and continues through February 16—is a collaborative effort between the Currier and Canterbury Shaker Village, which is celebrating its fiftieth anniversary as an incorporated museum this year. 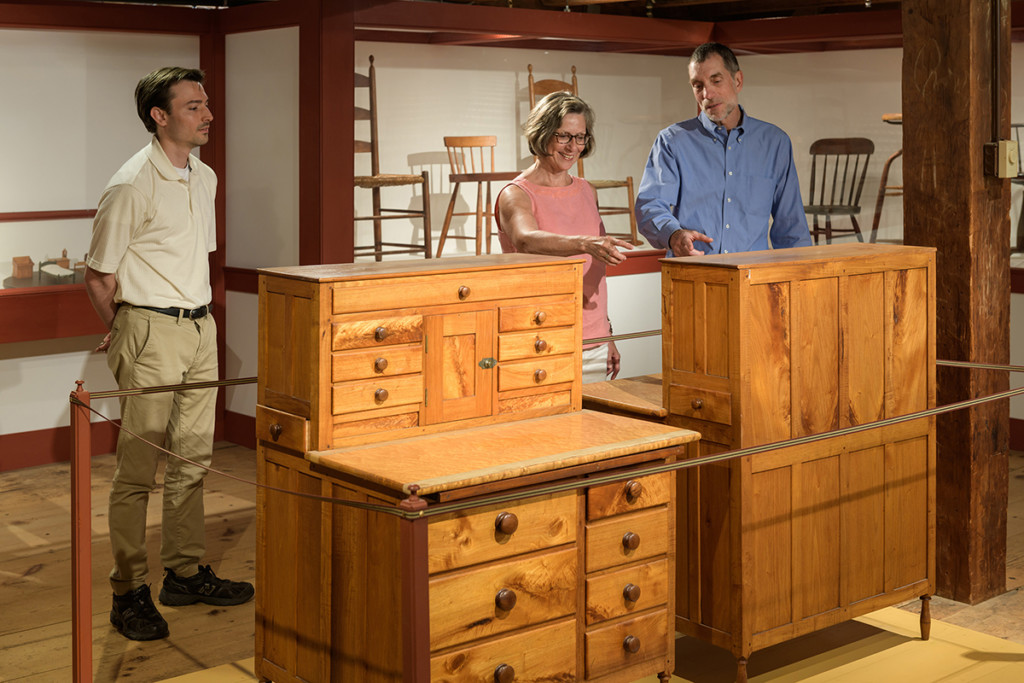 Interim Executive Director Maggie Stier (center) and Collections Assistant Max Walters (left), both with Canterbury Shaker Village, and Andrew Spahr (right), director of collections and exhibitions at the Currier Museum of Art, examine two sewing desks made by Shaker cabinetmaker Benjamin Smith in 1861. “They represent a distinct Shaker form and show how the Shakers were influenced by worldly styles,” Stier says.

In 1959, Canterbury Shaker Village transitioned from being owned by the Shakers to a nonprofit organization (although Shakers continued to live there until the last resident, Ethel Hudson, passed away in 1992). Today, visitors can enjoy twenty-five original and four reconstructed Shaker buildings, as well as 694 acres of forests, fields, gardens, nature trails and mill ponds. The village offers tours and educational programs and has been designated a National Historic Landmark for its architectural integrity and significance.

“We think it’s important to continue the legacy of Canterbury and to present it in the context of the larger Shaker experience,” Spahr says. To that end, the show will display numerous objects from the collections of both the Currier and Canterbury Shaker Village: Shaker furniture and Shaker-inspired furniture; the famous Dorothy cloak (top photo), the wool shoulder cape with a hood that became popular among society ladies and was designed by Dorothy Durgin, who arrived at Canterbury at age nine in 1834 and later become an eldress; and “fancy goods,” such as poplarware boxes, photographs and documents, including the original covenant from the founding of the village in 1792.

The Shakers and the Modern World also shows how the Shakers, known for their simple lifestyle and manner of dress—and for their well-designed furniture—did not shut themselves off from the world at large but rather connected with it, while still maintaining their religious principles and ways of life. “The Shakers were really good at remaining true to their faith in embracing change,” says Maggie Stier, interim executive director and marketing and development director at Canterbury Shaker Village. 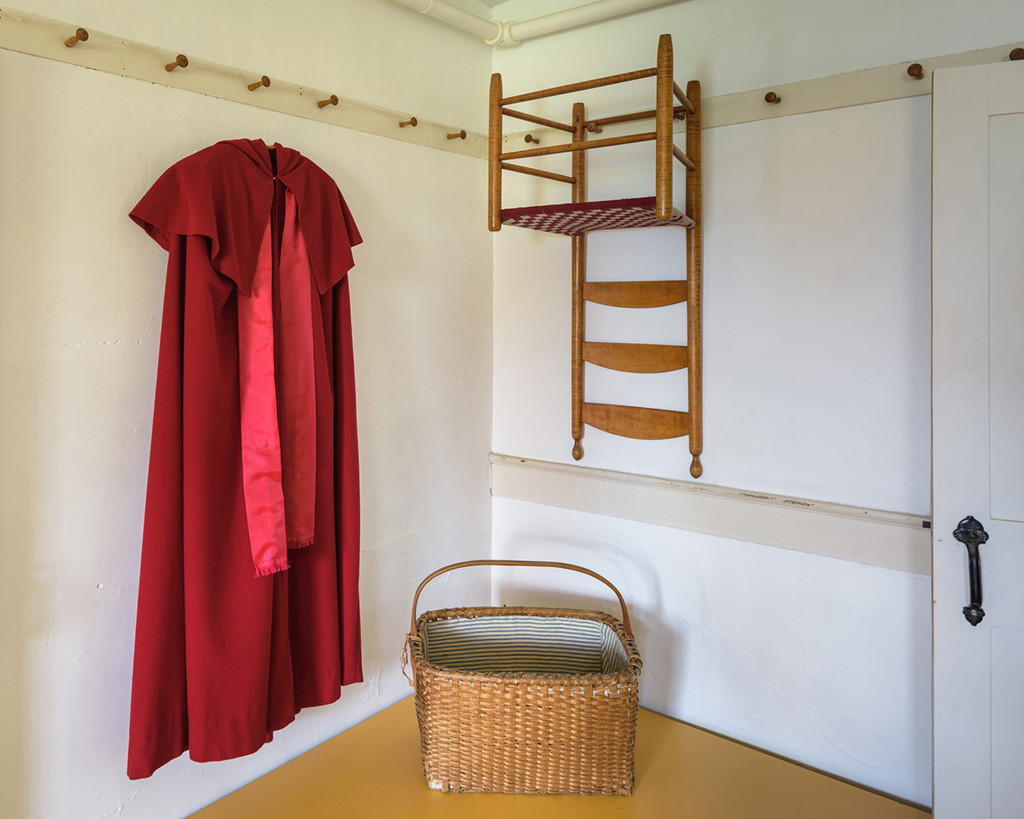 Several rooms throughout the Dwelling House (below), one of twenty-five buildings at Canterbury Shaker Village, now serve as spaces where visitors can learn more about Shaker life as well as admire the fine craftsmanship of their furniture and the building’s distinct architectural details, such as the pegrails that hold the chair (above). Photography by Morgan Karanasios.

The Shakers also sold goods to the rest of the world to help support their communities. Chair-making was a central industry for the community in New Lebanon, New York; the “fancy goods”—sewing boxes, pin cushions and other items—were made in many communities, as were brushes, bonnets, brooms and even patent medicines. Fancy goods made of poplarware—in which boxes were covered with “cloth” made from woven poplar strips—were made at Canterbury through the 1960s.

The poplarware products may surprise some museum visitors, because they are more decorative and less well known than, for example, the iconic ladder back chair that typifies the streamlined, functional aesthetic associated with Shaker design. But the Shakers made, within reason, what the world wanted.

The Shakers also willingly embraced technology. “They constructed and ran their own power plant in 1910,” Spahr says. “They had a number of patented inventions. One of the things I have been surprised to learn is how active and successful their commercial enterprises were.”

Along with this commercial proclivity, the Shakers maintained a high standard of workmanship. “Shakers became associated with quality, and with simple and excellent design,” Spahr says. “Their brand became very important. They made innovative use of public relations to sell goods, but also to attract new converts.” Their reputation for quality craftsmanship, while deserved, exists in part because they promoted it. 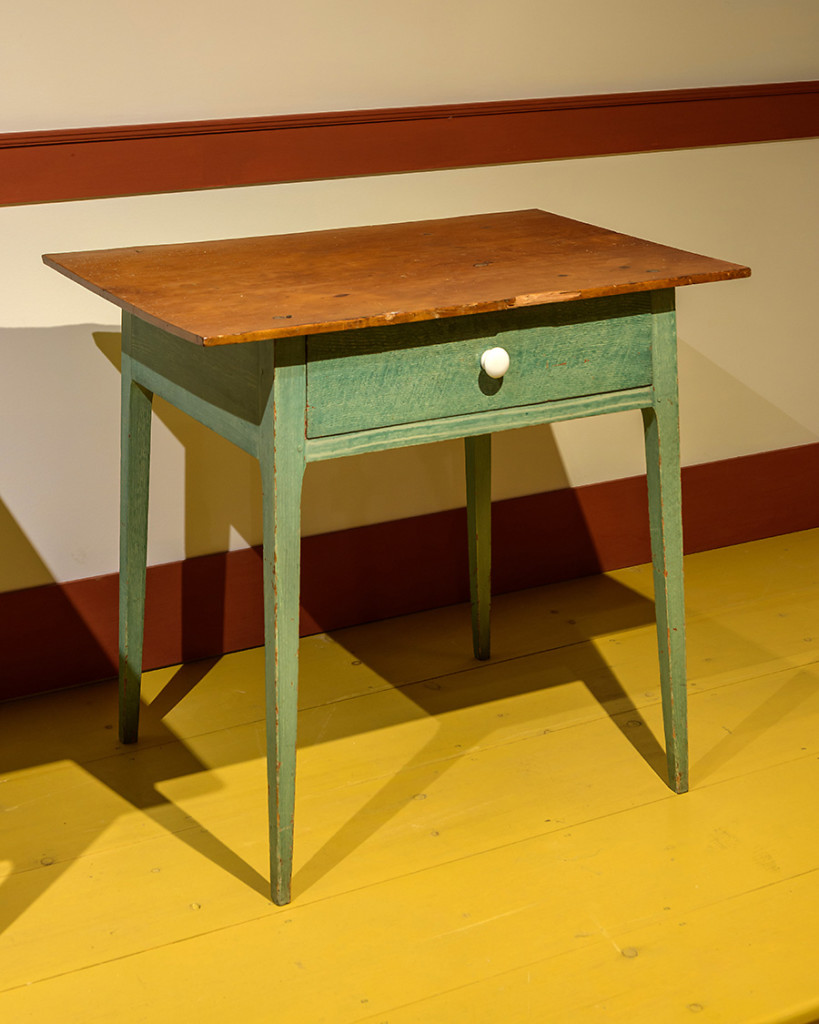 The green side table was made between 1820 and 1840, and was painted by the Shakers long after it was built. It is the only green grain-painted side table in the collection.

Rebecca Soules, interpretation manager at Canterbury Shaker Village, says she is excited to see pieces from the village at the Currier. “We have twenty-five historic buildings at Canterbury,” she says, “but we don’t really have much exhibit space. At the Currier show, people will be able to see some of these pieces in a whole new way.”

Both classic Shaker furniture and later Victorian-influenced examples are part of the exhibit. While in some communities, chairs were produced for sale to the outside world, Shakers in every community produced a range of pieces for their own use: beds, tables, chests and cupboards. Some of these reflect Victorian influences of the day, which may come as a surprise to visitors. The Shakers’ creative processes were not immune to influences from the outside world, Spahr says.

Also on display are examples of furniture not made by Shakers but influenced by Shaker design. Spahr says that during the 1930s, designers in Copenhagen, Denmark, were studying Shaker chairs, which are thought to have exerted considerable influence on Danish modern furniture of the 1950s, which in turn informs our furniture design today.

The last remaining Shakers now reside at the Shaker Village in Sabbathday Lake, Maine. For a religious movement that never numbered above six thousand or so individuals at a time, scattered among eighteen major communities, the Shakers’ influence continues to resonate to a surprising degree. The show at the Currier helps demonstrate how their principles, crafts and spirit of industry made the Shakers an important part of our national heritage.