A New Performance Space in Portsmouth

The storefront of the Loft—The Music Hall in Portsmouth’s new entertainment space—is a beacon at night. Brightly lit, with its bar glowing neon-blue, it’s difficult to miss. “People walk down Congress Street and see the glow from the windows, and they want to know what’s going on,” says Doug Nelson, a trustee for The Music Hall. “They sense a buzz, and it draws people in.”

The Music Hall has kept Portsmouth buzzing since the venue restored its historic Victorian theater and lobby in 2006–2008. The Loft, opened in April 2011, offers an intimate setting for live music and performance, workshops, and signature Music Hall programs, such as the Writers on a New England Stage series. Located just around the corner from The Music Hall, at 131 Congress Street, the Loft has a more contemporary vibe than the original theater. It also houses sunny new offices for The Music Hall staff, who had outgrown their cramped offices behind the theater.

“Everything we were looking for” 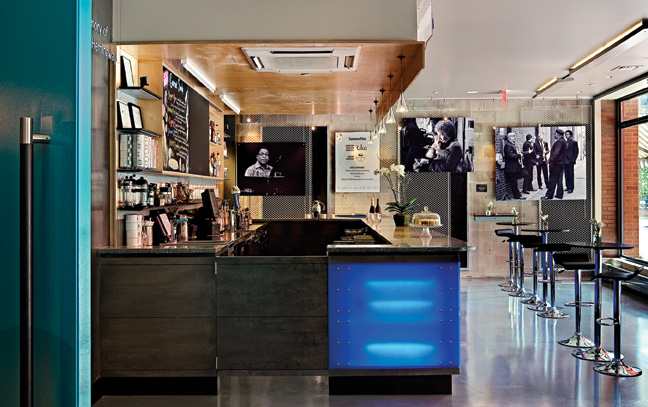 The Loft’s sleek, contemporary bar area also serves as a gathering space for audiences before performances.

Trustees for The Music Hall recognized that a smaller theater would not only create better opportunities for live performance, part of the theater’s mission, but also reduce administrative costs and utility bills. The 131 Congress Street site—on the ground floor of a 1960s-era brick building, in a retail space that had formerly been a bridal and formal-wear shop—was just what the trustees wanted.

“The space had everything we were looking for,” says Patricia, executive director of The Music Hall, “high enough ceilings to house a theater and no pillars to ruin sight lines. It was near the main theater and it had a highly visible presence on the street.”

The Loft had to meet multiple needs to serve as a new theater and office space, as well as offer food and beverage sales (during planning, Patricia emphasized that enjoying food and drinks at the theater is a critical part of the total entertainment experience). The Music Hall trustees and staff developed a business plan for the Loft, reaching out to donors, the City of Portsmouth as well as potential tenants and neighbors to ensure the project met its goals and was approved.

To execute the vision, TMS Architects of Portsmouth, which spearheaded the historic theater’s renovations, was hired as the lead architect. Studio J2 of Lincoln, Massachusetts, was selected to design the lobby, bar and theater spaces; Diane Hart of Diane Hart Designs in Kittery Point, Maine, designed the office space. DeStefano Associates of Portsmouth was the project manager. 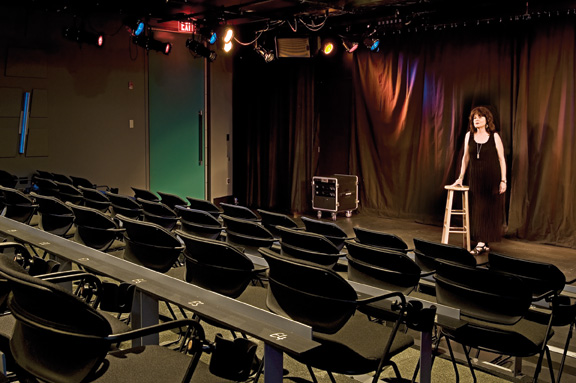 Kathleen Soldati, the Music Hall’s director of marketing, says that the design of the Loft space allows audiences to interact with performers and vice versa. Seating and the accompanying rails are moveable to accommodate different types of live performances or educational programs.

At 5,670 square feet, the Loft is cozy (Nelson likens the space to a Swiss army knife: tight and multifunctional). Creating room was the biggest challenge. Studio J2 recommended turning the theater at a 5-degree angle within the space, allowing for a larger bar area and a hallway to create circulation. “Everything was originally established at a 90-degree angle,” says Nicole Martineau, project architect for TMS Architects. “But those five degrees really opened the space up.”

Architects John Lynch (no relation to Patricia) and Jennifer Steffek of Studio J2 applied past theater design experience (their work includes Landmark Cinemas in Cambridge, Massachusetts, as well as performing-arts spaces in and around Boston) when constructing the Loft interior. The lobby and bar are visible from the street through floor-to-ceiling windows. With smooth, finished concrete floors and a sleek bar (the countertop is resin with recycled aluminum shavings), the lobby is stylish and welcoming.

“We wanted to open up the building’s storefront as much as possible to make the bar highly visible from the street,” John says. “We used neutral colors like grays and metals, but then put blue in the bar area and an aqua door into the theater to draw visitors’ eyes to those areas.”

As visitors enter the Loft from the street, the ticket counter is on the left and the bar is to the right. The aqua-colored door is what Patricia calls the “ceremonial entrance” to the theater, used when the space is utilized as a classroom or during special functions. Patrons can stand at the bar for drinks and snacks, or sit at one of several bar tables by the windows. The bottom front of the bar features backlit blue panels by LightBlocks that glow enticingly at night.

Patrons enter the theater via a hallway on the far end of the bar, passing David J. Murray’s large photographs of artists who have played at The Music Hall. The photos are mounted on hurricane fencing, which is backed by recycled, cotton-fabric acoustic panels covering the exposed concrete block walls. This serves to make the space feel more industrial and also acoustically sound.

The theater seats 124, plus cabaret seating at the front, which can be moved to accommodate different performances. The removable black chairs, with a few blue seats interspersed, represent opening bars of music—John’s stylized reference to jazz musician Miles Davis’s song “Blue in Green.” Drink rails made of paperstone (recycled paper and resin) and steel, located in front of each row of chairs, offer a place for patrons to place drinks or food (each seat also has a cup holder).

The bathrooms have a creative twist as well. The partition walls in each bathroom stall are chalkboards that welcome visitors’ comments and doodles.

The Loft has received rave reviews from patrons. “People like the fact that they can bring food and beverages into the theater, and they love the contemporary feel,” Patricia says. “It’s been a home run.”