A Passion for Fine Furniture

At their homes in Boston and in New Hampshire, one couple has built an impressive collection of works by many of the New Hampshire Furniture Masters. 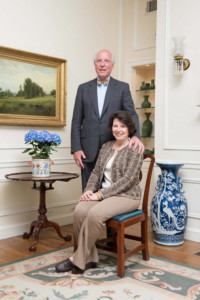 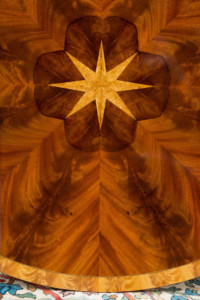 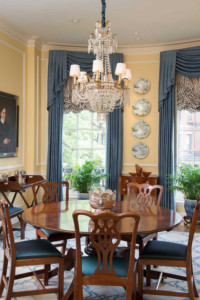 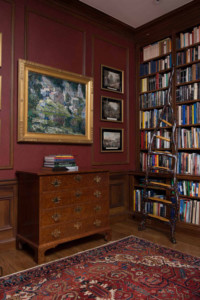 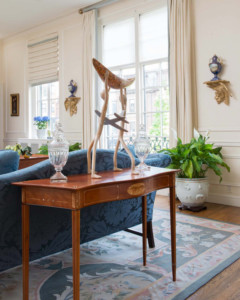 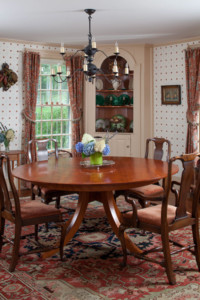 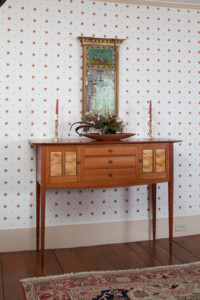 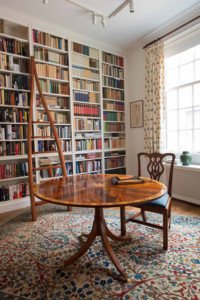 When it comes to fine furniture and other works of art, Arthur D. Clarke and his wife Susan Sloan know what they like when they see it. And if they don't see it, they don't hesitate to ask an artist to make something for them.

"The important part of working with any artist is giving them a clear concept of what you like and what you want," Sloan says. "Arthur's passion for furniture is all about beautiful wood grain used in a way to make an artistic statement. His ability to articulate this is integral to the success of the pieces we now have."

Clarke and Sloan's first commission was their 1997 request to Allan Breed, now of South Berwick, Maine, for eight copies of four Chippendale chairs they owned-at that point, Breed had been reproducing American furniture using traditional tools and techniques for twenty years. So outstanding was his work that Breed was asked to make a copy of an eighteenth-century Goddard- Townsend chest-on-chest, which the Rhode Island School of Design had sold at auction for $1 million. "That's why we went to him for the chairs," Clarke says.

That summer the couple was visiting friends in Weare and went to the League of New Hampshire Craftsmen Fair in Newbury. "We saw some attractive pieces of furniture and spoke with Terry Moore [of Wilmot]," Clarke says. "He gave me a catalog for the New Hampshire Furniture Masters' upcoming auction, and I was surprised to see that Allan was a member." Clarke was also surprised to see a mate to the eight chairs Breed made for him and Sloan in that catalogue (Breed made the ninth in case something went awry with one of the other eight).

Clarke and Sloan were so taken by the Furniture Masters' catalogue that they visited the pre-auction exhibit of works at the New Hampshire Historical Society in Concord. There, Moore's round end table made of fiddleback mahogany caught Clarke's eye. Someone outbid him for that table at the auction, but that didn't deter him; Clarke called Moore, who was happy to make him a coffee table of fiddleback mahogany.

Also at that pre-auction exhibit, the couple met Furniture Master Bill Thomas of Rindge and was drawn to his traditional style of work. "Arthur had a lot of questions about the Furniture Masters," Thomas says, "and I explained our patron process, whose benefits he immediately grasped." Patrons of the Furniture Masters commission a piece for display and possible sale at the auction. If it sells, a replacement is made for the patron. This way, everyone at the auction sees a high-quality piece that is made for someone's home rather than on speculation.

In 1999, Clarke and Sloan commissioned Thomas to make a CD chest of mahogany with highly figured and rare plum pudding mahogany veneer for the couple's Boston home. "For the design, I was inspired by a photograph Arthur gave me of an antique Chippendale chest," Thomas says.

They also patroned an auction piece from Thomas, a tilt-top elliptical table Clarke wanted for a desk in his office. "Arthur was perfectly willing to wait for a replacement if it sold," Thomas says. "Not only did it sell, but it was the subject of an intense bidding war between Governors Judd Gregg and John Sununu." That table is now in the Sununus' house, and Clarke now works on the second table Thomas built.

Although both of Clarke and Sloan's homes are classic styles-their elegant Boston apartment is in a Georgian-style building built in 1926 and their Federal-style home in New Hampshire was built in 1785-and much of their furnishings are either antiques or traditional in design, other pieces are modern and eclectic. "No matter what period they are from, you can put well-designed pieces together gracefully," Sloan says.

Some of the other more traditional pieces include a piecrust table in Boston made from quilted mahogany by David Lamb of Canterbury. "I based my design for this piece on an eighteenth-century Chippendale table made in Philadelphia," Lamb says.

When Clarke asked Ted Blachly of Warner to make a large dining table in curly cherry with a bent laminated pedestal base, Clarke "emphasized that he wanted me to design the piece but he also wanted it to reference the past," Blachly says. One of the elements he incorporated was an inlay detail on the toe of each leg, where there's a raised line with a diamond-shaped pendant draping over the edge in satinwood, a reference to the brass-capped toes of traditional pieces.

For their breakfast room in New Hampshire, Blachly made the couple a table in popcorn ash. "Its design is related to an early American hutch table where the top could be flipped up and become a chair," Blachly says. "I came up with the slide, then tilt design, which I'm very proud of as a solution."

Clarke adds that "each morning, I sit at this table and it is a pleasure to enjoy Ted's workmanship. What careful thought he and the other masters have given their pieces."

Both Clarke and Sloan like the way Garrett Hack of Thetford Center, Vermont, gives a new twist to traditional forms, and the couple has three of his pieces: a large cherry serpentine table with inlays; a cherry hunt table; and a small splay-leg table with inlaid details. The latter two were acquired at one of the furniture masters' annual auctions.

Clarke says as their collection grew, so did his interest in contemporary and eclectic pieces.

He needed a ladder to reach the upper bookshelves in his office in Boston and had become intrigued by the concept of an apple-picking ladder, which narrows at the top so it doesn't get stuck in the tree. So he commissioned Jere Osgood of Wilton to build one. Clarke says "the only flat surface is the top rung, where you can put your book-or glass of wine."

He thought he'd easily be able to move the ladder from his office, through the apartment and to the library, but he found that clumsy.
So Clarke spoke to Jon Brooks in New Boston about making him a second ladder.

While visiting Brooks's studio, Clarke saw Brooks's sculpture called Portage. It shows two faceless figures with bodies that have a brick pattern like buildings; an airplane connects them. "We thought it was significant how he incorporated the elements of the September 2001 World Trade Center disaster into that sculpture," Sloan says. "It is a wonderful contemporary interpretation."

Brooks says that shortly after he delivered the ladder to the couple, they organized a wonderful party to celebrate the installation. "They invited friends and fellow art collectors, and after an amazing meal, they served individual cakes that were decorated with replications of the library ladder," Brooks says. "Arthur and Susan's enthusiasm and support for the arts and the New Hampshire Furniture Masters has been phenomenal and is always much appreciated."

About the New Hampshire Furniture Masters'

The New Hampshire Furniture Masters is a group of immensely talented artists committed to preserving the legacy of fine-furniture-making begun in Portsmouth more than two hundred years ago.

In 1995, a group of six New Hampshire furniture makers-each of whom was already nationally recognized for his work-got together to build awareness of their craft and cultivate an audience for their work close to home. They also wanted to establish an educational trust fund, the New Hampshire Institute of Furniture Making, in order to train apprentices as had been done since the Middle Ages in Europe. To fund the institute, the group began holding an annual auction, an event now in its eighteenth year, that, this year, takes place at the Currier Museum of Art in Manchester on September 22 (see page 42 for more information).

Much of the Furniture Masters' work is created on commission by an individual or corporate patron, and the group's one-of-a-kind pieces have found homes in the Smithsonian's Renwick Gallery, the American Craft Museum in New York City, the Currier Museum of Art, Boston's Museum of Fine Arts, and a host of other public and private collections.